Two of Wands Tarot Card and its Meaning 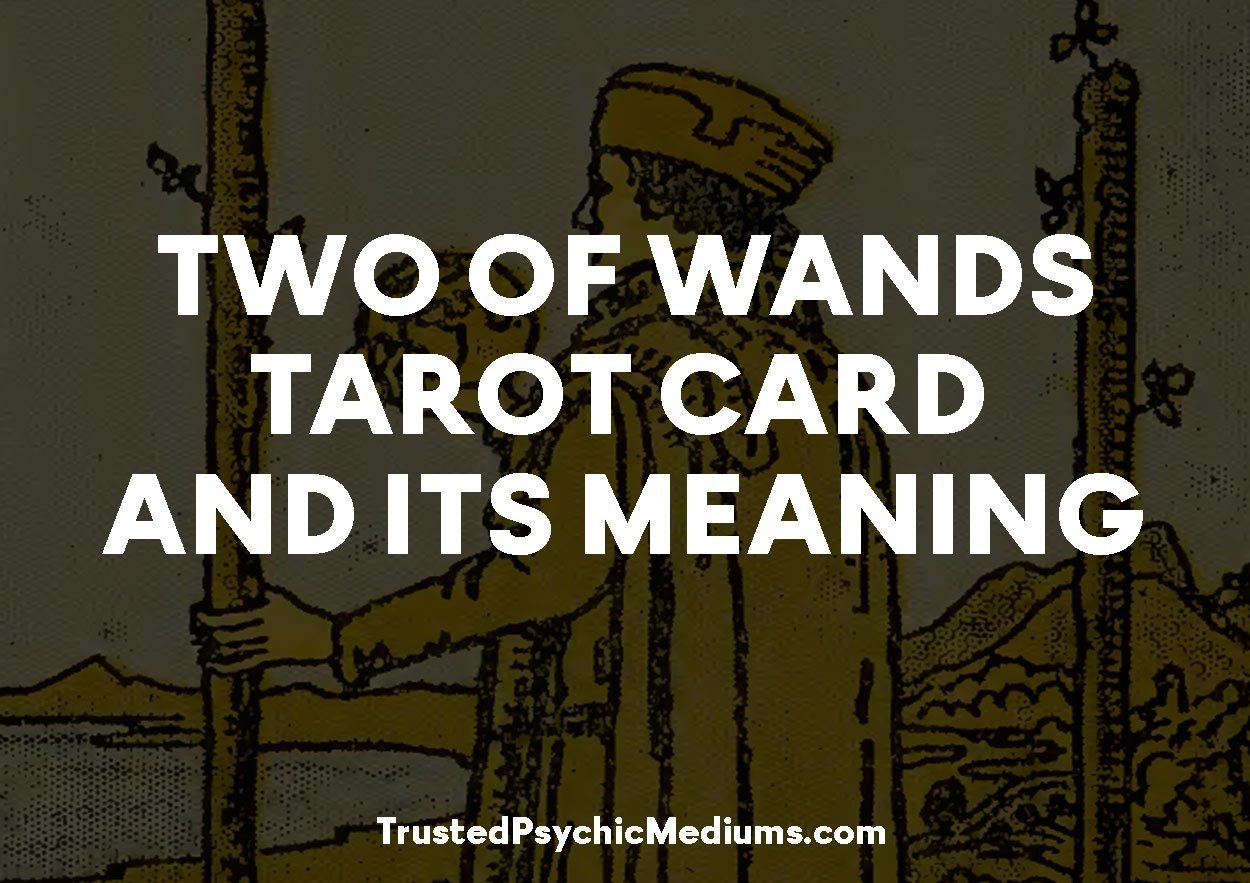 The Two of Wands tarot is the card of discovery, decisions, insight, and advantage, just like the King of Swords. It represents progress and planning for the future.

It signifies reflection, preparation, control, and leadership; likewise with the Six of Wands tarot card.

It indicates rumination and surveillance, and the ripening of ideas.

The Two of Wands tarot is depicted as a man standing on top of the castle roof. He holds a globe in one hand while he looks out to the vast horizon.

Wands represent creativity, and this man is fortunate enough to have two. It just indicates that he has plans, and he has back-up plans.

He has a vision. He is fearless. He has a strategy, therefore a strategic person just like the Knight of Swords.

The Two of Wands tarot takes the inspiration and the idea to make them into an actual plan. This time, it’s no longer just an idea in your head. It is right there, ready to be executed, and awaiting your direction.

The Two of Wands tarot also represents discoveries. You will be stepping out of your comfort zone, exploring new places, and creating new experiences.

It can be terrifying at first, but remember that if something scares you enough, it’s probably worth it.

The Two of Wands tarot indicates that you are considering starting on your long term goals, and you are laying out all of your plans to achieve them.

You may also be considering traveling overseas for study or work, or even just for a change of environment.

The world is vast and there are so many things that you can try and can be. You don’t need to stick with what you only know. You have to make your world bigger, and your experiences more meaningful.

And to be able to do that, you must leave the safety of home and explore an exciting new place.

The Two of Wands tarot represents that you are set on your plans and unwavering in your intent. The ball is rolling and it’s completely up to you to keep it rolling.

Don’t stop until your ideas come to fruition, and until you start enjoying the results of all your hard work.

Two of Wands Tarot and Love

When it comes to love and relationships, the Two of Wands tarot indicates that you possess the skills needed to make your dreams come true.

Things have been set in motion by the Two of Wands tarot. Now it’s your move. Now it’s time to make whatever you envision for your relationship to happen.

Depending on the condition of your relationship with your partner, this can mean a bad relationship turning better, or reaching a compromise, or finding something in common, or finally doing something that has always scared you or held you back.

The Two of Wands tarot wants you to know that relationships must always strike a balance. It should be secure but never stifling, free but never disconnected, strong but never hardened.

Time to play some beautiful music together. But somebody has to take the first step. And if that isn’t him, that will probably be you.

How many horror stories have you heard from single women all over the world about missed chances and opportunities?

How many heartbreaking stories have you heard featuring The One That Got Away?

If only you smiled back, he would’ve approached you and asked your name, and whether you preferred coffee or tea, and if you’d like to have a cup with him soon.

If only you answered his call instead of ignoring his attempts to clear the air about the blond bombshell he was dancing with at a party, who turned out to be his cousin visiting from Australia.

Don’t hold back. Don’t play mind games. Do what feels right in your gut and save yourself the heartbreak.

When the Two of Wands tarot is reversed, it means failure and breakdown of relationships. He is losing interest day by day, and the relationship is just getting more toxic and problematic.

Instead of inspiration and happiness, all you get is stress and heartache.

Two of Wands Tarot and Money

When it comes to money and finances, the Two of Wands tarot often signifies that all is well and swell in your life.

This card usually appears when you’re about to receive good news in terms of money or your career.

You can expect a salary increase or a new job offer. It can also mean bonuses, perks, or freebies. Things look good and feel stable, so you can enjoy this abundant and fruitful period of your life.

Two of Wands Tarot’s Meaning for the Future

When it comes to the future, the Two of Wands tarot is not exactly the strongest card to get.

Your strength and authority, when misconstrued, can lead you to a future where you are alone and isolated. You may lose some of the most important people in your life.

While you still can, resolve what needs to be resolved. Make peace.

Do everything you can to make your dreams into realities, but don’t ever lose yourself. Don’t throw away your principles and beliefs in the process.

While you’re at it, collect as many experiences as you can. Create memories that will last you a lifetime.

Live your best life. Don’t spend a day wondering what if. Don’t regret the things that you were not able to do.

Is the Two of Wands a Sign of Bad Luck?

The Two of Wands is a minor arcana sign that often indicates that you have two different paths that you need to choose between.

These paths will lead in completely different directions, so you are required to take some time to really get to grips with what it is trying to tell you or what you will be able to achieve.

Furthermore, it can also show that you are perhaps not as happy with your life as you would like to be, but you are still unsure as to what to do next.

This sense of uncertainty is going to really hamper you in your life and there is every possibility that you could go ahead and take the wrong path and make life harder for yourself.

It will not always be the case that the grass is indeed greener on the other side.

This sense of being rather indecisive is something that applies no matter if you draw the card in an upright or reverse position.

It all pretty much says the same thing, and there is some worry as to what the future may hold when you draw this card at any sector.

There may be limited options for you, it could be that an older person is going to come back into your life in some way.

It can also indicate that you simply do not plan correctly and that this is then leading to major problems for you at different stages.

However, even though it does offer you this idea of uncertainty, it is often lacking in the idea of there being bad luck attributed to the card.

Instead, it is focused more on that idea of just not knowing what to do, and that this can eventually lead to some bad luck affecting you because of having made the wrong decision earlier on.

Also, the Two of Wands is trying to tell you that you need to be more decisive and to be more confident in your answers and how you are trying to organise your life.

If you are able to do this, then choosing the correct path becomes significantly easier, and you are then going to find that life will perhaps not be as mundane or difficult as you may have been concerned about.

So, the Two of Wands is not directly a source of bad luck and it does not really hint at that at any point.

However, your actions can certainly lead to that happening but that is not the direct fault of the card as such.

Overall, this is a difficult card to draw simply because of the questions that then surround it.

However, do not be afraid that it will then signify something bad happening as that is certainly not going to be the case.

Instead, look at it as being some kind of a warning that you need to change your ways or else aspects of your life will certainly become far more difficult than they are at this point.

My Final Thoughts on Two of Wands Tarot

The Two of Wands tarot wants to remind you that you need to give and receive in equal measure. This is the secret of happy and successful relationships.

In a more general sense, if you feel a little off-kilter, know that things are going to get better. This dry spell or this lull in your life is temporary.

Never lose focus on the goal and work at it until things get better.

The Two of Wands tarot wants you to reflect and ask yourself: Are you grateful for your good fortune and the countless opportunities coming your way?

Do you consider yourself a good leader? How else can you improve?