Knight of Swords Tarot Card and its Meaning 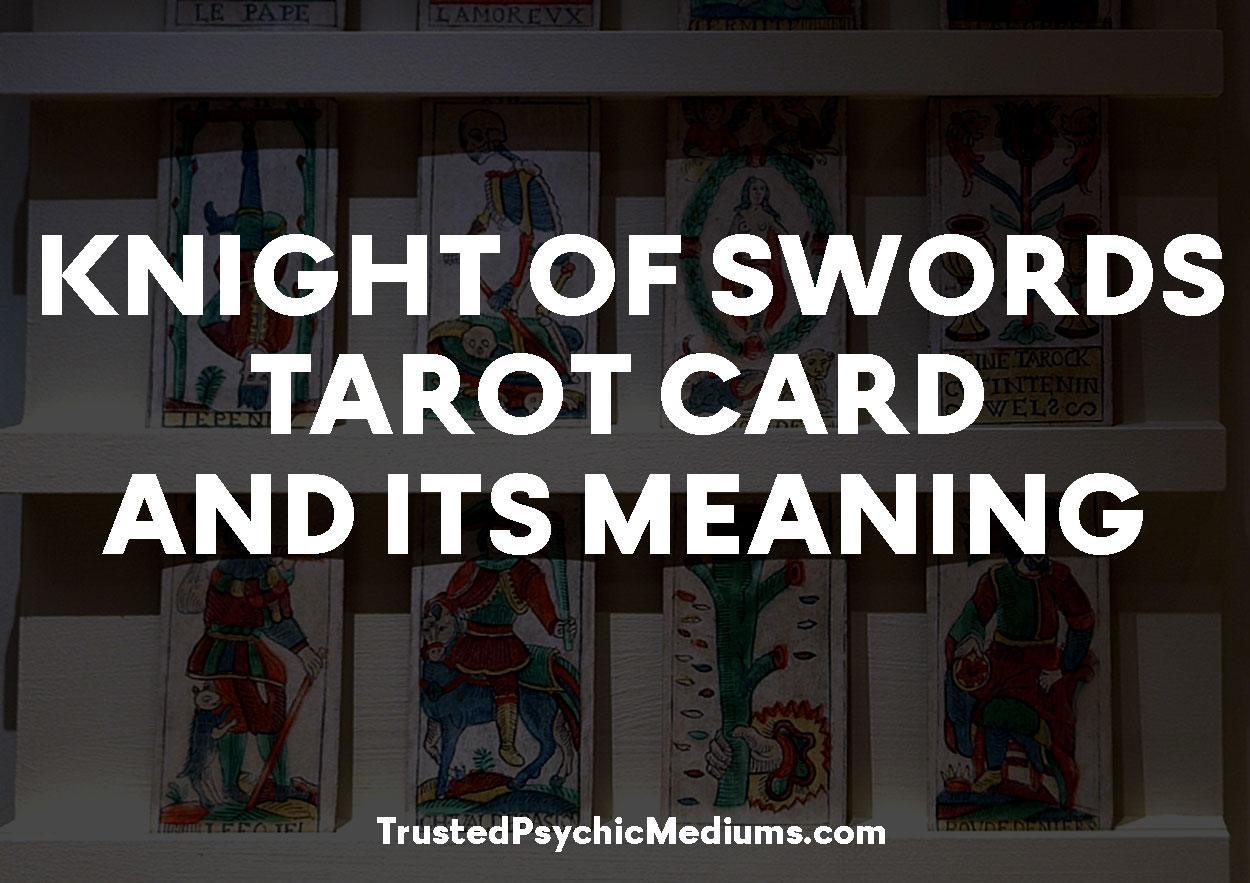 The Knight of Swords tarot is the card that represents being headstrong and opinionated. It’s about being hasty and willful, even cunning and arrogant like the King of Wands.

It symbolizes being communicative, dynamic, strategic, and action-oriented.

The Knight of Swords tarot is depicted as a young man in full battle suit, his sword raised while riding a white horse and charging into battle.

Above him, the skies look dark and stormy, and the trees nearby are being battered by rough winds.

The young man is hell-bent on the attack and he does not worry about what harm may befall him upon reaching the field of battle.

The Knight of Swords tarot symbolizes great ambition, tenacity, and strength. Just like the Eight of Wands, once you have set your sights on a goal, there is no stopping you until you achieve it!

You don’t care about the obstacles, the risks, and the dangers that may pop up along the way. Your eyes are on the prize from start to finish.

However, this unwavering dedication to achieve the goal or to accomplish the task can prove to be detrimental, too. You may be embarking on a journey for which you have very little preparation or foresight.

You are ignoring potential warning signs in your desire to pursue your own goals. You may be disregarding responsibilities and well-meaning advice from people who care about you.

Remember that in anything that you do in life, you must have a sense of responsibility, accountability, and compassion.

The Knight of Swords tarot often signals a time when new projects are about to begin or new ideas are being hatched, with new opportunities just like the Three of Wands.

You are brimming with energy and you feel invincible.

With this amount of excitement, focus, and determination, what can go wrong and stop you from emerging victorious?

Take caution, though, and avoid taking shortcuts and doing things half-baked in your rush to get to the finish line.

Because when it comes down to it, you don’t want to sacrifice good work and excellent quality for quick delivery.

When the Knight of Swords tarot appears in your reading, it denotes the need to view and understand how the world works in a deeper and more intellectual point of view.

And because you love to engage in conversations and you love to speak your mind, this also signals that you should join groups or organization with other individuals who share the same passion so that you can motivate each other.

Knight of Swords Tarot and Love

When it comes to love and relationships, the Knights of Swords tarot indicates that there is boldness and recklessness in the air.

If you’re single and looking for love, the Knight of Swords tarot wants you to make haste. He wants you to get a move on and speed things up. He wants to ask you, “What the hell are you waiting for?”

Be bold and brave and say yes to that date. You won’t find the love of your life if all you do is stay at home and strengthen your relationship with Netflix.

If you want to kiss him, do it! The Knight of Swords tarot wants you to know that there is nothing to fear. You have here a good man who will not harm you or break your heart.

All he has is love and respect for you, and this denotes a good start to any relationship.

In relationships, the Knight of Swords tarot can also symbolize a fight or a battle of some sort between you and your partner. You may have reached a point in your relationship where you want to prove to the other how right you are and that this is how things should be done.

It’s a little competitive, and nobody wants to back down. But it’s a healthy and normal kind of competitiveness that most relationships go through, so relax. Ride it out.

A person in your life that’s represented by the Knight of Swords can symbolize emotionlessness, or lack of interest and care. It doesn’t necessarily mean that he is unable to love or show affection.

It’s just that he prefers to keep his emotions in check and hold them back. He does not see the importance in having them.

In the reversed position, the Knight of Swords tarot signifies negative energy, weakness, and waste of power.

When the relationship starts to get problematic and issues start popping up here and there, you and your partner can simply opt to throw in the towel and just walk out.

You can fight and argue all the time just for fighting and arguing’s sake. Not really to resolve issues or clear the air. In the end, one of you will just give up and surrender.

Forget about second chances or positive thoughts. The reversed Knight of Swords simply is bad news. There’s no getting through to him right now.

If you want to still be in a relationship with this man, you have to leave and give him space and hope that he will come around — and come back to you— eventually.

Knight of Swords Tarot and Money

When it comes to the Knight of Swords tarot and money, it indicates good news. You will receive money that you have not been expecting. Your investments are growing and you are also experiencing returns.

Spend wisely. Keep doing your good habits when it comes to money and investments. You will continue to enjoy good fortune and abundance.

Knight of Swords Tarot’s Meaning for the Future

In the future position, the Knight of Swords tarot is a pretty powerful card. It warns you to prepare for the unexpected and to protect yourself from the damage it can bring while you can.

Is the Knight of Swords a Sign of Good Luck?

The Knight of Swords is a minor arcana card that represents the idea of some change coming you way should you draw it in the upright position.

There is also a sense that you have been waiting this change for some time, and you have to be willing to jump at the opportunity as soon as it arrives.

Not being aware of it even existing is going to prove to be your undoing, which is why it stresses this need to be as alert as possible.

This is all about being assertive and confident enough to get what you want. You need to be focused and determined as this is going to make a real difference to the end result, and this applies no matter the sector of your life that you draw this card in.

The changes that it talks about are all positive in nature whether it be a relationship or a change in your career that will allow you to move your life forward.

You have a real drive and determination, and the theory that you make your own luck is certainly something that can be applied to this card so, in this sense, it does indeed represent good luck and is a positive sign for you if you are fortunate enough to draw it in the upright position.

However, things are going to be slightly different for you when you draw the card in the reverse position, but that does not have to mean that life is going to become a real disaster for you.

Instead, it often means you have effectively missed this particular boat and the opportunity that you have been waiting for may have come and gone.

Alternatively, it could indicate that you are simply not ready for that change so it has been a positive thing that you missed out on this, but the opportunity is certainly going to come around once again.

At the same time, it may signify a loss of control or making the wrong decisions at the wrong times.

Also, it may show that you are insecure, obsessive and carry a number of negative personality traits that can work against you in life and also make people feel as if they do not want to know you.

This can then spell trouble in both your relationships as well as your work life, and the stress associated with it can also work against you with your health.

Overall, the Knight of Swords can be a sign of good luck, but that is only the case when it is drawn in the upright position.

With this, there are exciting times awaiting you, but only if you are alert enough and able to identify the positive times that are just around the corner.

However, draw the card in the reverse position, and you are looking at something completely different even though it does not have to mean that you are completely swamped with bad luck.

My Final Thoughts on Knight of Swords Tarot

With the Knight of Swords tarot, you can expect positive outcomes and good news. This can indicate plenty of opportunities for you to travel and explore, go out and enjoy, and accomplish projects that you set out to do.

It’s the perfect time to follow your heart and pursue your passions. There’s no better time than today!

The Knight of Swords tarot wants you to pause and reflect: Are you capable enough to lead your people? Are you determined and strong enough to take charge? Are you okay with leading or being led?