Six of Wands Tarot Card and its Meaning 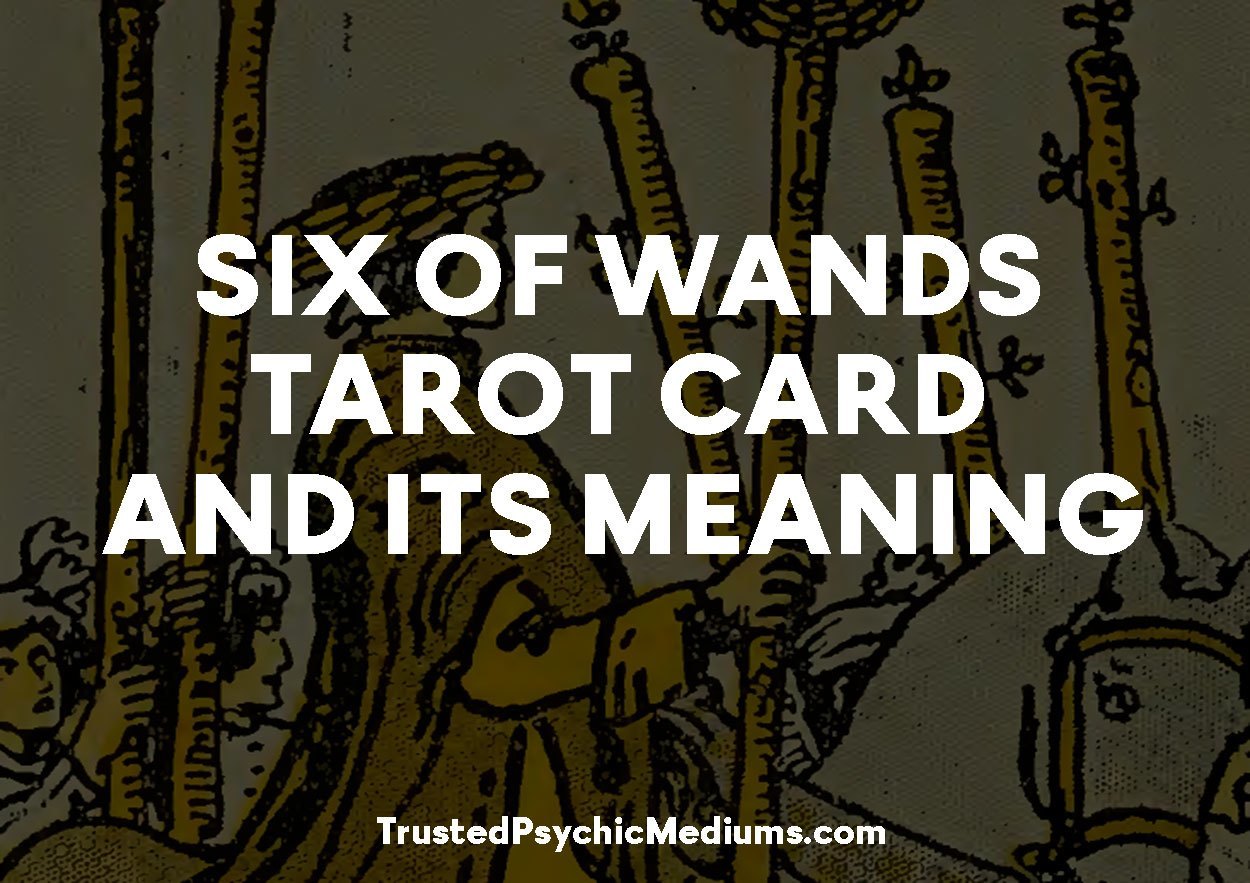 The Six of Wands tarot is the card of victory and power, of pride and honor. It signifies leadership, motivation, action, and progress. This one is likely close to the Two of Wands‘ characteristics.

The Six of Wands tarot is depicted as a man riding a horse while passing by a cheering crowd. He has a wreath that he wears on his head, and his horse is draped with a colorful parade cloth.

He holds a long wand on his right hand, and the people in the crowd hold and raise the other five.

This is a picture of success and triumph. It represents achievement and public recognition, and being proud of everything you have accomplished.

The Six of Wands tarot can indicate an award that you will receive for all the good work you’re doing, or an acknowledgment from your colleagues for a breakthrough, or just an overwhelming response to a good deed that you made.

It can even be just a simple handshake, a pat on the back, or a hug of gratitude. However big or small, it succeeds in making you feel special and praised for your efforts.

It lifts your self-confidence to new heights and motivates you even more to do better.

The Six of Wands tarot tells you that are using your skills and talents to be successful in whatever you set out to do.

You have successfully removed the confusion and decreased the distractions. You can now focus on the task at hand.

The Six of Wands tarot works as a good encouragement for you to believe in yourself and all that you are capable of achieving, just like the Ten of Wands. Do not feel small, and don’t be afraid of success.

Don’t indulge in feelings of guilt or unworthiness, because you worked hard to get there. You made a lot of sacrifices to reach that point.

The Six of Wands tarot also signifies the need to create your own brand and build a good reputation when you enjoy a certain level of success.

You want to be successful in everything that you do, and you want people to know and give you due credit or recognition.

One way to do that is by sharing your story with others to inspire them and encourage them to take the same journey.

You can share with your own personal network all the things you’d gone through to get to where you are right now.

The only downside to this is that it can also bring about arrogance, self-importance, and conceited behaviors, just like the King of Wands. You can end up feeling self-important with an inflated ego.

Remember that you, too, started out small and unknown. Without the help of your peers and mentors, you will not be where you are now.

So rein in that big ego and be humble. There’s a way to feel proud without looking almighty and superior.

The world appreciates a humble and worthy winner, so never let success get to your head.

Six of Wands Tarot and Love

When it comes Six of Wands tarot and love, it simply means that you are finally winning!

You have come from a long and difficult road, and now you’re finally reaping the rewards of your sacrifices.

You can now rest easy and sleep soundly without worrying what your partner is doing and who he’s screwing this time.

You have finally reached the peace and stability you have been waiting for so long. No more ugly fights, no more tears, no more heartaches.

The Six of Wands tarot signifies power and positivity, and you have regained these back in your relationship.

You have everyone’s admiration for sticking by your partner through thick and thin, and making your relationship better and stronger.

Your relationship has never been better and happier, and you’re on the road to happier and better days.

Not everyone can achieve what you have done, so give yourself a pat on the back and be thankful for having that kind of strength and determination.

Be proud of your relationship, including the battle scars that you have collected over the years. This is what makes relationships beautiful.

Going through the bad together, and enjoying the good together. You made your decision to fight for your love, and that’s something to be really proud of!

When the Six of Wands tarot is reversed, it symbolizes serious issues in security or stability. The relationship doesn’t seem to be getting anywhere. You’re not getting the appreciation or the recognition that you deserve.

You’re being steadily ignored, and you’re always the last priority. You’re in a relationship, but you have never felt so alone.

Sometimes you feel like it’s better to be single than to be in a relationship that makes you feel lonelier by the day.

The Six of Wands tarot wants you to hold on and be more forgiving. Every relationship goes through a rough spot.

You don’t have to let go right away and surrender the fight. The lull in the relationship will be only temporary.

Six of Wands Tarot and Money

When it comes to Six of Wands tarot and money, know that your financial difficulties will get better very soon. Things will be on the upswing for you when it comes to money or wealth.

But remain prudent and conservative when it comes to spending. If you don’t need it, don’t buy it.

Six of Wands Tarot’s Meaning for the Future

To get there, you must travel bumpy roads and make uphill climbs. You will have to face opposing forces who will challenge you, but you will still emerge triumphant.

Is the Six of Wands a Sign of Bad Luck?

The Six of Wands is a minor arcana card that, when drawn in the upright position, represents the concept of success, winning, receiving praise, and anything else that is connected to the idea of an accomplishment or achieving anything in your life.

Of course, this does then mean that it comes across as being highly unlikely that it will be connected to any sign of bad luck, but further examination of what the card is telling you will prove to be rather important.

In this position, it can often reflect strength and having a strong self-esteem which is then carrying you on to even further success than you have had before.

In relationships, it is going to show that you are achieving your goals and are riding high, and this is something that is generally applied across the various sectors of your life.

You are looking at the Six of Wands in an upright position as being anything but a sign of bad luck as it does make life a whole lot easier for you.

However, the same cannot be said when it is drawn in the reverse position as that is where the Six of Wands can really cause you some problems.

In this position, it does indeed represent the complete reversal of what would happen if it was drawn in the upright position, so this is where the sense of this card being a sign of bad luck is going to come into fruition.

In this position, you are looking at it representing the idea of failure, losing out on things, never being able to achieve things.

It can also stand for dishonesty, a sense of arrogance and any other word along these kinds of lines that have negative connotations.

At this point, it can be easy to see how the Six of Wands can indeed be viewed as being a sign of bad luck when there are just so many things connected to it that have a bad energy about them.

In your life, it can show that your relationship is in trouble and that there are no goals being set or achieved.

It can also indicate a lack of loyalty, and within your career it may point to people trying to undermine you or problems lying ahead for you.

It also tells you to watch out for health issues and that there may be concerns about the spiritual path that you are on at this moment in time.

Overall, the Six of Wands could be viewed as being a sign of some very good luck coming your way when you have drawn it in the upright position, but then things change dramatically should you draw it in the reverse position.

If that is the case, then there may be some rough times ahead for you that you will need to navigate as well as you possibly can, but there is little doubt that this is going to be a difficult thing for you to be able to achieve.

My Final Thoughts on Six of Wands Tarot

The Six of Wands tarot is all about happiness, victory, and celebration. You are seeing all the fruits of your labor. You are enjoying the rewards of all your hard work.

Treat yourself and take a well-deserved break. The Six of Wands tarot and some thoughts to reflect on:

Can you handle the critical acclaim and the public recognition? What is your guiding force? What’s your next step?