Ten of Wands Tarot Card and its Meaning 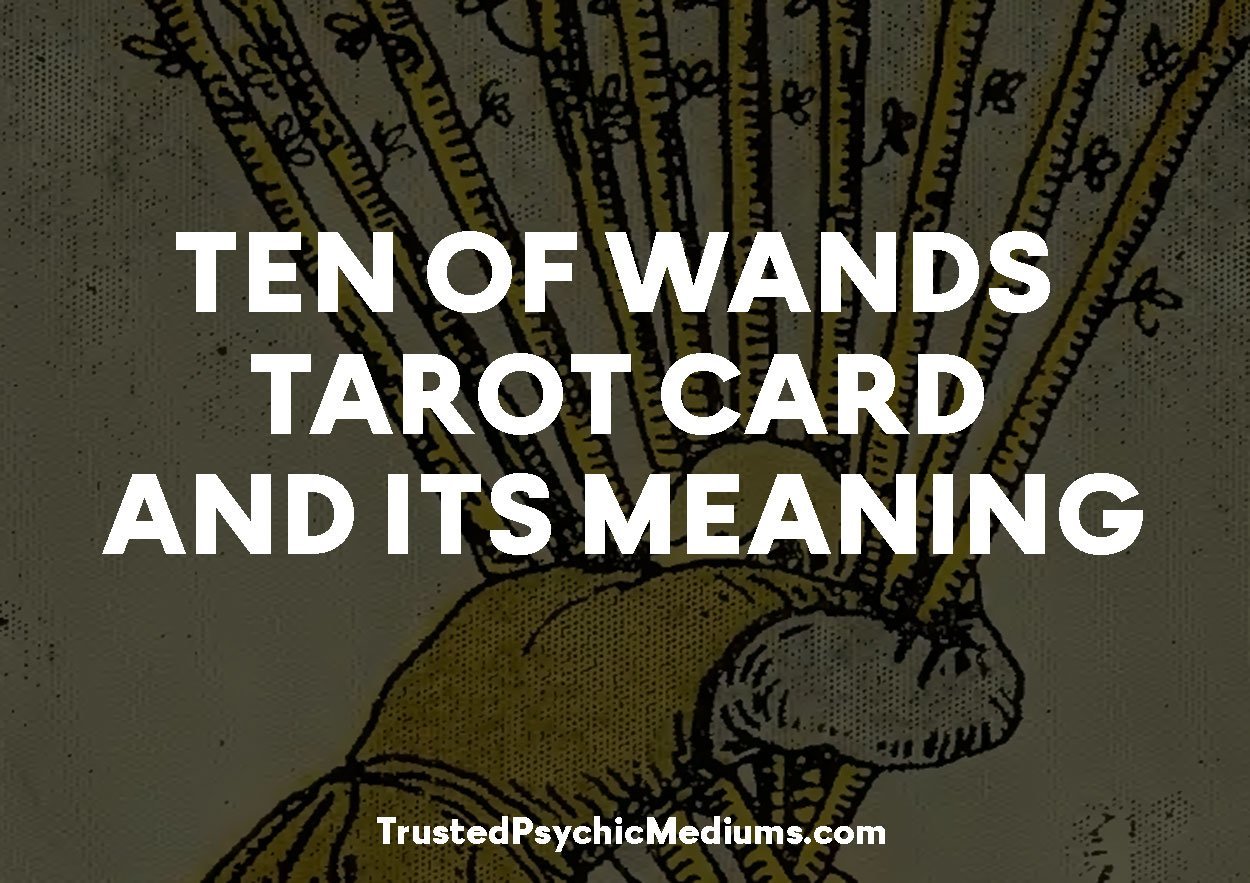 The Ten of Wands tarot is the card for responsibility and achievement. It symbolizes being burdened, stressed, or overextended, much like the other tens cards like the Ten of Pentacles or Ten of Swords.

It represents hard work. It also means harvest or defense, and collecting or stockpiling.

The Ten of Wands tarot is depicted as a man struggling to lug around a heavy bunch of wands.

The ten wooden wands are fanned out in an orderly fashion as the man carries them, and he looks like he is about to fall down from the sheer weight.

But even if he looks beaten and exhausted, he makes the slow and difficult walk back home.

The Ten of Wands tarot signifies the completion or the end of a cycle. Thus, this card says that you have ended a cycle after a particularly difficult period.

You have accomplished something big. You have realized your dream. You have completed a major goal.

Now, you are finally reaping the rewards, or dealing with the consequences that come with your rewards.

Sometimes, when you accomplish something big or achieve something monumental, there are certain responsibilities and commitments that come with it.

The road to success never ends, so this new set of responsibilities and commitments means more work and more effort on your part.

They may be too much to handle in the future, and you want to ask yourself whether you have taken on more than you can handle.

If you’re a businesswoman running your own online store and you have just reached your first million in sales, that’s quite a feat!

But that also means more people visiting and buying from your store, and that indicates longer, crazier, and more stressful hours at work.

The initial thrill of doing something that you love and earning from it is replaced by the burden of hard work and physical labor.

Unless of course you seek help and delegate tasks. You can enjoy what you’re doing and free up your social calendar to enjoy the fruits of your labor.

The Ten of Wands tarot wishes to remind you that there’s only so much that you can take or accomplish.

You’re not a mutant. Doing so many things all at once robs you of the quality life that you should be enjoying.

Stop and review your current workload. Are you still able to do other things?

If the answer is no, start delegating tasks. Take out tasks that are not important and devote that time to yourself or to your loved ones instead.

Don’t overwork yourself, because this puts a strain on your productivity, creativity, and overall well-being.

Ten of Wands Tarot and Love

When it comes to love and relationships, what the Ten of Wands tarot wants to tell you is that you’re working way too hard.

There’s just too much to do in your relationship, and this can be both good and bad.

If your relationship is peaceful and smooth sailing, this indicates that there is so much love and happiness to go around.

There are so many things that you can do to please your partner, and you both make it your life’s mission to do just that.

You need to work harder to achieve the happiness and stability that you both desire.

When it comes to emotions, the Ten of Wands tarot is telling you that your partner is doing everything he can to keep you satisfied and happy, but you’re too busy to notice.

This can indicate a growing restlessness or symptoms of burnout or falling out, which sadly indicates quite similarly to the Four of Cups.

In some cases, the Ten of Wands tarot can also indicate that your partner is stuck with obligations that he does not want to fulfill.

He secretly hates doing his responsibilities and his resentment just continues to grow.

When the Ten of Wands tarot is placed in the reversedposition, it’s telling you that you are doing too much for your partner and for your relationship.

You have to give yourself and your relationship a break. Stop forcing things. If it’s meant to happen, it will happen.

Ten of Wands Tarot and Money

When it comes to money and wealth, the Ten of Wands tarot indicates that you may be feeling a little overburdened, overwhelmed, or stressed. But nowadays, who isn’t?

Look at your financial situation calmly and impartially. Create a plan. Manage your spending habits. Spend within your budget and always save for the rainy days.

Ten of Wands Tarot’s Meaning for the Future

The Ten of Wands tarot in the future position is a warning. It can mean that you have plenty of work ahead when it comes to relationships, career, or life goals.

This can mean that the job you thought sounded so fun and glamorous will turn out to be one of your biggest headaches.

This can also mean that after the honeymoon period, you will realize that your brand new husband is still a clingy and needy little boy who demands attention 24/7.

Consider this card a blessing, because you can do something today to get rid of regrets or heartaches in the future.

When you get the Ten of Wands tarot in your reading, do what you can now to create your boundaries. Be clear on what you’re willing to do and what you’re not.

This way, you remove the unnecessary load and needless stress in your life and in your future.

Is the Ten of Wands a Sign of Good Luck?

The Ten of Wands is a minor arcana card that can bring a sense of being weighed down and stressed.

Even though this may sound very depressing, there can still be an idea of it not being as bad as you may have initially feared, so there is no need to write off this card and believe that it has nothing to do with any sense of good luck being on your side.

In the upright position, the Ten of Wands can point to you feeling as if you have been burdened with something.

You may feel that you are being weighed down with it all and that people are effectively taking you for granted.

It can also act as a warning that you could potentially be heading towards a burn out unless you change what you are doing, or at least take stock of it all, and that is hardly a good situation to be in.

However, the Ten of Wands can also signify that you are coming to the end of this difficult and stressful phase or event.

The end of this struggle is nigh, and with it comes a renewed sense of optimism and a brighter future.

At that point, and in this context, then the card can at least indicate that some better luck, and at least better times, are going to be on the horizon.

Unfortunately, the reverse position is not going to represent anything being better for you.

In fact, it can be stressing that you have far too many responsibilities and that you could be working hard and just simply going around in circles.

This will then lead to a sense of frustration and becoming more and more annoyed at your situation with you then feeling as if you are bogged down and unable to make any progress.

Furthermore, there can also be a sense of you feeling as if you are just resigned to your life being this way and effectively just giving up.

Your stamina may have left you, and yet in some instances, the Ten of Wands in reverse position can also indicate that you have reached the end of your tether and are ready and willing to let go of some things.

It may also show that you have been able to learn all about the art of saying no from time to time.

Overall, the Ten of Wands is more of a warning card about how you are running aspects of your life as opposed to being about either good or bad luck coming your way.

While it does not describe a bright future, nor does it talk about one that is completely bleak especially as it guides you as to what you need to do in order to turn things around.

This card is not one that you should fear or dread being drawn as it is merely there to alert you to the simple fact that all is not quite right and you need to take this on board before it is too late.

My Final Thoughts on Ten of Wands Tarot

With the Ten of Wands tarot, it indicates that you are already so successful and rich. You don’t need to work so hard, or be a slave to your work.

You know you’re tired. It’s time to acknowledge that you are, whether in your personal or professional life. You can really use a break. Take one now, and have it as long as you want.

The Ten of Wands tarot wants you to take a break now and reflect on these questions: Are you feeling overburdened or overextended?

Why are you working so hard? What are your motivations? Do you feel like you need a break as soon as possible?