Ten of Swords Tarot Card and its Meaning 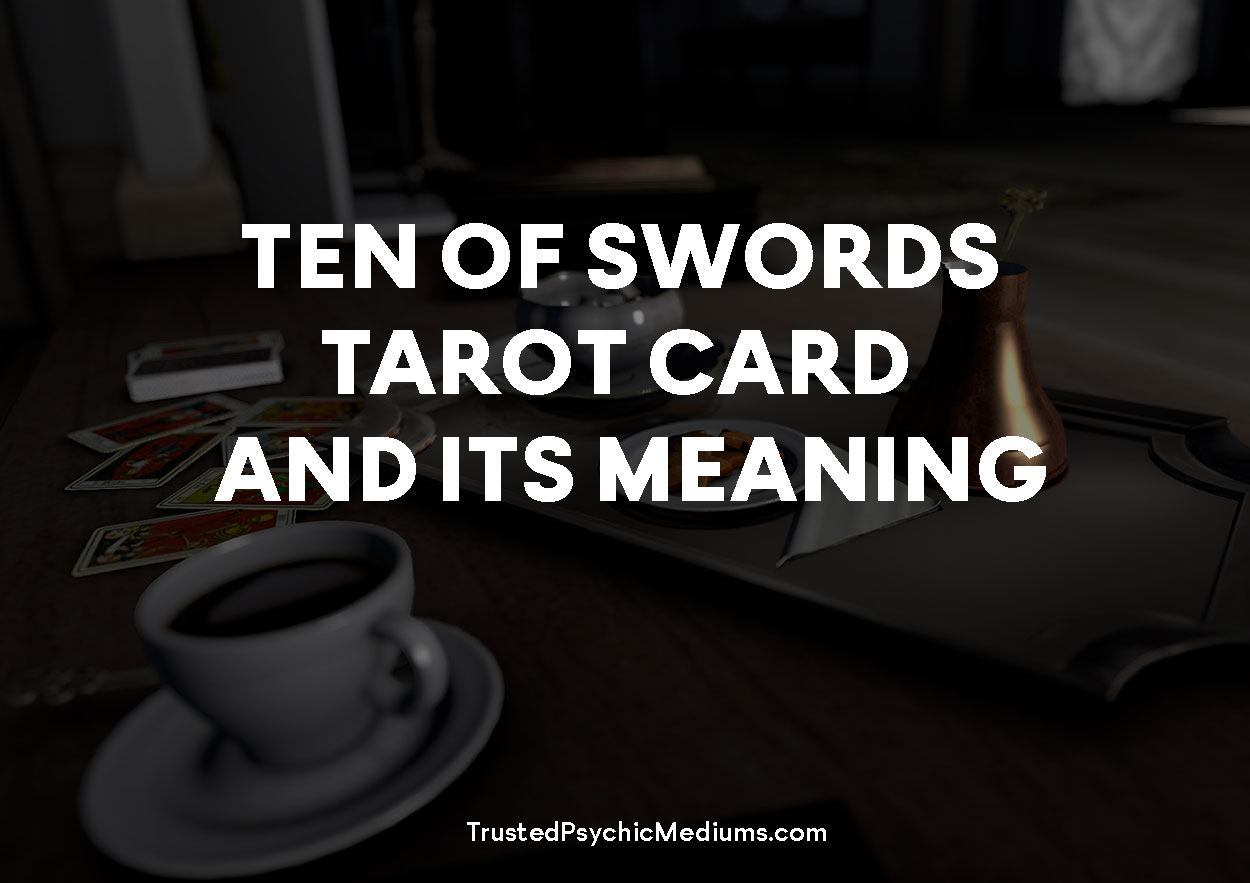 The Ten of Swords tarot is the card that symbolizes loss, defeats and, endings, which is likewise similar to the Five of Cups. It signifies betrayal and crisis, realization and consequence.

The Ten of Swords tarot is depicted as a man lying face down on the ground. He has been stabbed in the back with ten swords, and he lays there bleeding.

The sky is pitch black, adding to the air of hopelessness, pain, and loss.

The picture looks dark and depressing, but there’s comfort to be had in the calm blue waters and the sun slowly rising in the distance.

It symbolizes that there is sunshine after the rain, and hope after the pain. There is a beginning after each end, and victory for each defeat.

The Ten of Swords tarot also symbolizes failures and disasters of the sudden and unexpected sort, as opposed to the tarot card of the Ace of Pentacles.

They hit you with no warning and send your whole world crashing down. Sometimes you can stop the tidal wave of events.

But more often than not, you will be powerless to do so. All you have to do is just let them happen.

The Ten of Swords also signifies a betrayal, or being backstabbed by someone you care about. You will not see it coming, that’s why it will hurt so much.

This can also represent a time when you will feel like a victim. Someone can launch a smear campaign against you.

Someone can bully or harass you at work. Your boyfriend can leave you for another woman.

You can use this sorry and pitiful situation to rise above the hatred and the pain. You can choose to forgive and be the more mature one.

You can even be the martyr in this situation and get the sympathy of the people.

The Ten of Swords tarot can look like a bad omen, but it’s actually a symbol of hope, just like the Four of Swords.

All the pain and disappointments will soon be over and you will soon experience some of the best days of your life.

When the Ten of Swords tarot appears in your reading, it’s telling you to rise up and think about why these things happened to you.

Take the lessons, good and bad, and learn from them. There is a reason why people have to go through pain and loss, and that is to build character and make you strong.

The Ten of Swords tarot does not represent death, even if the card shows death and violence.

Rather, it signifies an end or a change that will be hard to accept or deal with at first. But as you go along, you will realize why it had to happen the way it did.

Ten of Swords Tarot and Love

When it comes to love and relationships, the Ten of Swords tarot tells that your life is in chaos. Or that your body is just really, really tired.

The Ten of Swords tarot can be one of the most troubling cards to get. Because this means that you are being attacked, and in a cruel manner to boot.

Although the pain that you will experience is mostly psychological, the effects can manifest physically as well. When something is troubling your mind, the rest of the body can feel it, too.

When people keep on bashing you on social media, for example. That can take a toll on your self-esteem. You can lose sleep over that. You can lose your appetite. You can feel weak and lethargic.

The Ten of Swords tarot can also represent a relationship that ended badly. Like your boyfriend suddenly telling you he’s married and this is goodbye. Don’t call, don’t text.

It can also be a painful betrayal that will leave your head reeling and your heart in pieces. Like your boyfriend running off into the sunset with your best friend. Your male best friend.

When the Ten of Swords is in the reversed position, anything is possible. Like when you and your partner get into a bad fight, and you kiss and make up after?

It indicates that the both of you are leaving the hurt and the negativity behind to enjoy your peace and quiet.

When the Ten of Swords tarot is tied to a relationship goal, you will not achieve it unless you work really hard for it. Relationships take a lot of work.

They require a lot of growing and changing over time, and you must be ready to experience all of it together.

Ten of Swords and Money

When it comes to the Ten of Swords and money, expect some disappointments. It’s definitely not the time to take a gamble.

If you’re experiencing money loss, try not to let it get you down. It’s not the end of the world. There are so many opportunities out there that you can grab to change your luck.

Always approach your situation realistically and rationally. Being emotional or impulsive about money and financial decisions will do more harm than good.

Ten of Swords Tarot’s Meaning for the Future

When it comes to the future, the Ten of Swords tarot wants you to learn the direction where you are headed.

Don’t listen to other people’s opinions as they can take you farther away from your personal truth.

Be practical and logical when you view the world and this will give you the sense of optimism that you need.

Is the Ten of Swords a Sign of Bad Luck?

The Ten of Swords is a minor arcana card and it is certainly not the kind of card that can ever be seen as representing a good omen or a bright future for you.

In other words, it is indeed linked to the idea of bad luck, but this card does tend to go further than this which becomes painfully clear when you look more closely at what it is viewed as representing.

In general, you are looking at this card representing betrayal, someone backstabbing you or talking about you in a negative way behind your back.

It represents failure, doom and gloom, running into dead ends with your life, and a whole host of other terms and phrases that are all connected to bad luck and you feeling as if your life sucks.

The upright position is negative in pretty much every area of your life and it views the potential for problems everywhere you turn.

It can also signify some violence or even a curse being placed upon you at some point, which does then paint a picture of this being a card that you are best to avoid wherever possible as it just predicts that there will be trouble ahead for you.

The reverse position of the Ten of Swords can also go in two different directions.

First, it can represent the idea that those issues and difficulties that you have been trying to deal with in your life are coming to an end and that you will indeed get through it all.

Alas, it does not tell you if you will do so unscathed, but the very idea of reaching the end of a difficult period is clearly going to be a positive thing for you.

On the other hand, it can also signify that things are going to get worse.

Alternatively, it may be the case that the things you have been worried about for some time are going to come true and that this is not going to be a nice thing for you to experience.

In other words, you need to brace yourself for this kind of event as it will not be pretty in any way.

This delicate balancing act when the card is drawn in the reverse position applies to every part of your life.

In a relationship, it could indicate that a difficult phase is coming to a close and better things await.

Alternatively, it could mean that the difficult part is only just starting and life is going to be tough. This contradiction applies in every area.

Overall, the Ten of Swords is indeed associated with bad luck as well as a number of negative thoughts and emotions that are going to have a bad impact on your life.

It is not going to be something that kills you, but life is certainly not going to be as rosy as it perhaps once was so you better listen to what the card is saying to then allow you to counter it wherever possible.

My Final Thoughts on Ten of Swords Tarot

What the Ten of Swords tarot wants you to know is that when one door closes, another one opens.

There’s always a rainbow after the rain. You are experiencing this pain now because you need to.

You are being directed to a much better place, but you have to experience a little pain first.

Some thoughts that you can ponder on with regard to the Ten of Swords: What choices and decisions have you done that brought you to this period in your life?

Do you believe that everything happens for a reason? Do you have faith that there’s always a solution to every problem?