King of Swords Tarot Card and its Meaning 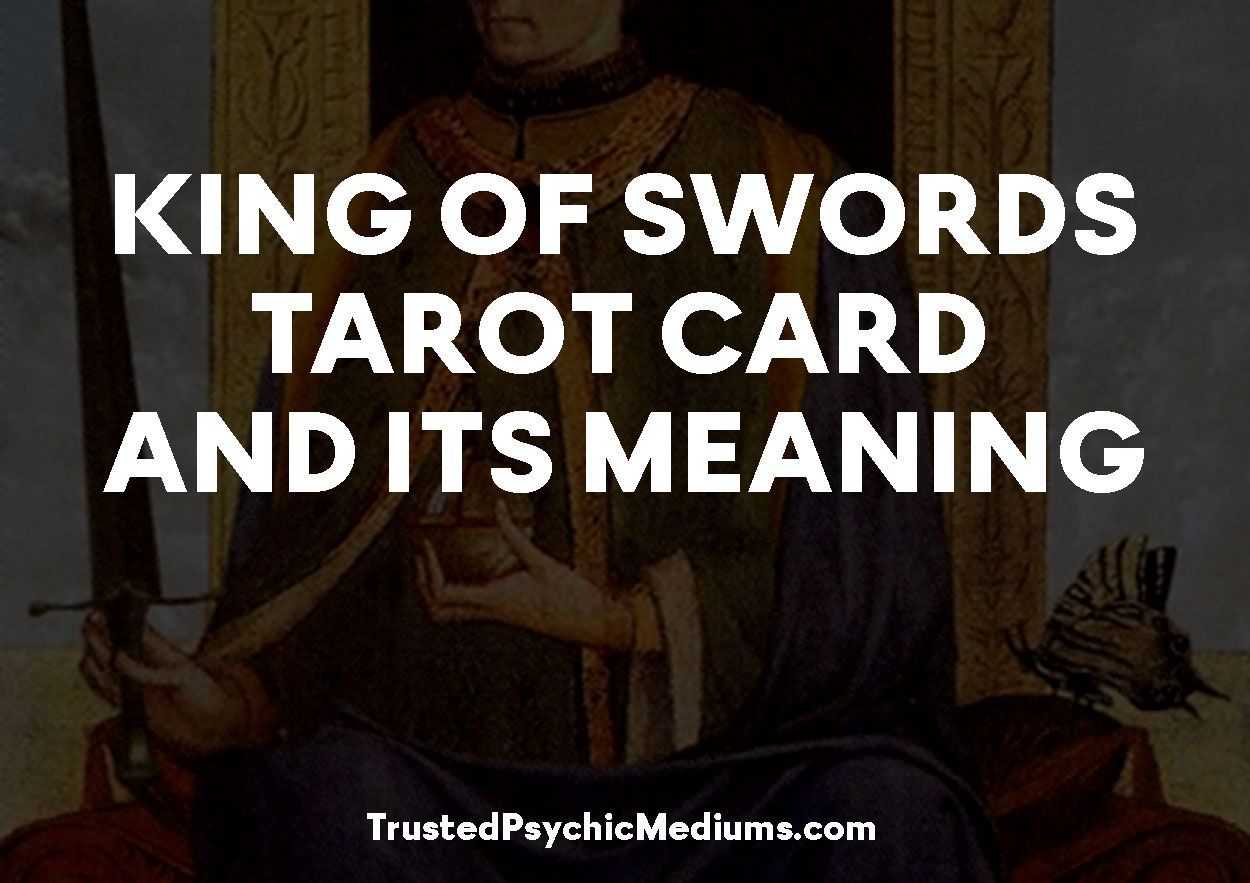 The King of Swords tarot is the card for clear, analytical, and logical thinking. It symbolizes intellectual strength, insight, introspection, and retrospection.

It also symbolizes being authoritative, truthful, assertive, just like the Seven of Wands.

This card is about being wise and kind, generous and conscientious.

The King of Swords tarot card is depicted as a king sitting calmly and powerfully on his throne. It’s a beautiful day out, and clouds litter the clear blue sky.

The King is displaying his long double-edged sword and pointing it towards the sky.

He wears a royal blue tunic and a purple cape. His throne is adorned with butterflies and crescent moons. Everything in this image symbolizes peace and serenity, strength and power.

The King of Swords tarot symbolizes vision and clarity. It signifies that you have reached the point in your life where you are focused on the path that you want to take and how you’re going to get there, unlike the Ace of Wands.

You know how to articulate your desires and you can make the transformation you need in your life possible.

The King of Swords tarot represents authority and intellectual strength. This indicates that you possess the intellectual prowess and the authority to achieve all your goals.

Like any powerful king, judge, or commander, you must exhibit a certain detachment and objectivity when dealing with situations and people.

You must use logic and critical thinking to find the truth and weed out the lies, deceptions, and plays on emotions.

The King of Swords tarot wants you to be stern but remain fair. Don’t let strong emotions sway you or cloud your judgment. Always make use of your strong logic and keen intellect.

You have to get to the bottom of things with complete impartiality and great insight. This goes the same with the Two of Wands.

The King of Swords is usually a lawyer, a financial adviser, or a tax consultant. He has amassed a substantial amount of knowledge in his field and will be able to provide objective and sound advice about your current situation.

He is fair and factual. He will give you the facts straight and this will be coupled with his professional advice.

He is considered an expert, so don’t be surprised if he charges an exorbitant amount as his service fee.

The King of Swords tarot can also be an indication that you need to hire an expert to help you sort out a messy or confusing situation.

It can also mean that you need a powerful and authoritative figure to help you shed light on matters where you are too involved or too biased.

King of Swords Tarot and Love

When it comes to love and relationships, the King of Swords tarot signifies that you must weigh the pros and cons.

In a relationship setting, you can be getting a little too critical of your partner. In turn, he can be analyzing the situation way too much, or he can also be getting too controlling.

You both are starting to ponder whether this relationship is good or bad for you, or if this can possibly lead to something serious.

Often times, the problem is nothing. Nothing that can kill the relationship or make you swear off love for good. Nothing that a good conversation and passionate intercourse afterwards cannot solve, either.

But other times, it can signify the bigger and more serious issues in the relationship. When that happens, it’s time to sit down and talk in a calm and mature manner. Being melodramatic won’t help, so save that for another time.

When it comes to emotions, the King of Swords tarot signifies critical thinking. He’s not one to believe in love at first sight because for him, love begins in the mind and not in the heart.

If he tries to get to know you better, he sees something in you that he likes and will work his way to loving you. Not really the most romantic, but definitely holds promise!

When the King of Swords tarot is in the reversed position, he becomes the bad guy. He can be frustrating and stubborn in arguments, and his controlling behavior can reach extremes.

He will suffocate you and leave you emotionally and physically stressed.

King of Swords Tarot and Money

When it comes to money and wealth, the King of Swords tarot indicates that there is a need for you to be educated about your money.

You must understand your financial situation and determine what steps you can take to solving it or improving it.

It also signifies the need to be generous and charitable. Remember that whatever you give out to the universe, it will come back to you a hundredfold.

Overall, the King of Swords tarot is a positive card that represents growth and development.

King of Swords Tarot’s Meaning for the Future

When it comes to the future, the King of Swords tarot indicates that there will be resistance or obstacles to your goals. But you are a very intelligent, capable, and enlightened person.

You can easily get past challenges and still come out strong. You did not become for nothing!

Is the King of Swords a Sign of Good Luck?

The King of Swords is a minor arcana card which represents in the upright position a sense of discipline and having structure in your life.

This in itself can then lead to a feeling of being in control, and when that is the case, it does tend to mean that good luck has the real potential of coming your way.

Furthermore, there is a desire to have integrity, honesty and morals so these are all very positive things that are going to be on your side.

As you look at the sectors where it can be drawn, then you are still going to be getting positive signs.

In the relationships sector, you are more than likely with someone that has the kind of qualities that this card represents.

That is clearly a positive thing as it will bode well for the future of the relationship, so it does seem as if things would be going your way.

For your career, then there may be an older man who is going to be able to offer you some sage advice.

You would be wise to listen to them as it will propel you forward in your career with possible new options appearing before you as well.

There is also good news in your health and spirituality areas where you should be looking at increasing your knowledge and having some structure to your approach to your health.

If you do all of this, then you are not going to encounter any problems that you should then be concerned about.

If you then draw the King of Swords in the reverse position, then it does not automatically mean that everything is going to prove to be a disaster.

Instead, it is pointing towards an idea of there not being enough structure or you are lacking some of the discipline that you are going to require in order to effectively move forward.

It may also indicate that you are running up against a power-hungry individual who could potentially make life harder for you.

If it is drawn in reverse, then you must take great care to navigate through life and to not rush into things or make the wrong decisions.

It is acting as a warning that you are not being disciplined enough, or your structure is completely wrong leading to further problems and stresses that you just do not want to deal with.

Overall, the King of Swords can represent some good luck on your part, but only when it is drawn in the upright position.

Also, it is more a sense of you making your own luck, which is why you may very well feel as if things are going against you if you draw it in the reverse position.

This is not a card that is strongly predicting good or bad luck going to happen to you but rather life being more positive or negative depending on what you are doing or how you are acting.

It should provide you with the strength to move on with your life as long as you follow its advice.

My Final Thoughts on King of Swords Tarot

The King of Swords indicates a powerful and positive energy that surrounds you. You can make things happen with your authority and leadership, but sometimes, things will not happen the way you want them to. That’s only normal.

When these things happen, you have to manage your expectations and adapt a new approach. You may even have to change a few things here and there with regard to your thoughts and behaviors.

Sometimes, you have to stop overthinking things and just enjoy. Life is fleeting. There are things in this world that just don’t make sense, but still they’re beautiful. Enjoy them!

Be confident and trust in yourself that even if you slip and don’t always have the handle on things, your world will not come crashing down. You are made of tough stuff.

If there’s nothing wrong with something, anything, don’t waste your energies thinking about it! If it isn’t broken, don’t go running around trying to fix it!

The King of Swords tarot wants you think and reflect: What are you so worried about that you have to keep thinking of solutions and worst case scenarios?

What are you fighting for? What’s the worst that can happen if you let things go for a moment?