Ace of Wands Tarot Card and its Meaning 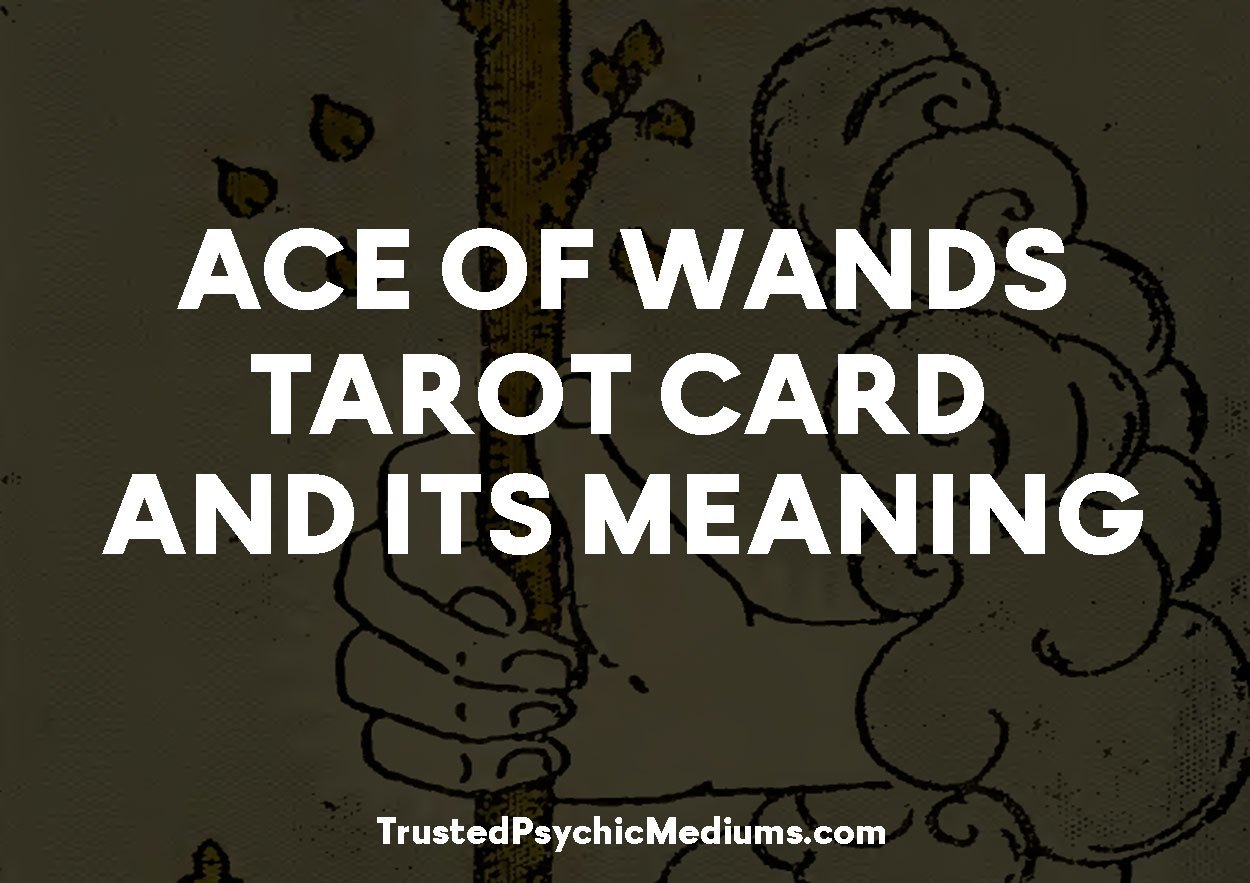 The Ace of Wands tarot is the card that symbolizes creation and beginnings, and somehow like the Page of Cups. It represents potential and passion. It indicates inspiration and creativity. It signals direction and expansion.

It also means power and resourcefulness.

The Ace of Wands tarot is depicted as a hand emerging from a white cloud, grasping a long wooden wand. This wand is thin at the tip and thick at the handle.

Young and unshorn leaves are growing out of the wand, symbolizing growth and development. Beyond the horizon, a tall castle stands, representing the opportunities that await you.

With the Ace of Swords tarot, it’s the universe’s way of saying to go ahead and go for it. You have never been more inspired and excited about a new idea or a new project.

You’re all hot and raring to go. Clearly you can make this project possible just by the amount of energy and passion that you possess.

Just like the rest of the ace tarots, Ace of Cups or Ace of Pentacles, one thing that you must consider is that with the Ace of Wands tarot, the seed of ambition is small and young, and you have to nurture it so that it will grow.

You have to keep the dream alive and work on it very hard so that it will become a reality.

Everything starts with a spark that turns into a fire. You must start the fire, and keep the fire burning!

This can be a great time for you, but it will not be free from restlessness or anxiety. You will not be so sure exactly how to begin or how you will proceed, which is definitely the opposite of the Eight of Wands. Don’t fret, though.

Everybody feels the same way at the beginning of something huge and important. You must channel this nervous energy instead and make it work for you!

Ace of Wands Tarot and Love

When it comes to love and relationships, the Ace of Wands tarot represents the start of something positive.

It denotes feeling charged and energized. In love, this signals something very romantic and thrilling!

You may also find this interesting:  The Lovers Tarot Card and its Meaning

Have a crush on someone? Now’s the time to act on that crush. Stop being coy and ask him out to go running with you the next morning, followed by breakfast at the local café.

Single and feeling a little bit lonely? The Ace of Wands tarot can mean the beginning of a new relationship!

If you’re travelling, it can also indicate that you will meet someone who will be involved with you romantically. So be on the lookout for love, but don’t scare it away, either.

The Ace of Wands tarot can also signal that the relationship you thought was slowly slipping away is now coming back. It can indicate your relationship is getting better, or it will become deeper and more meaningful.

It can also mean that the relationship is taking a more serious turn. We’re talking about getting engaged, getting married, and having babies kind of serious!

The Ace of Wands tarot brings fun, laughter, and excitement to the relationship. There’s a lot of positivity and energy happening that rub off on just about everybody. Great things are happening and are about to happen. All you and your partner have to do is to actively pursue them!

When the Ace of Wands tarot is in the reversed position, it indicates quite the opposite. There is no electricity or spark in your first meeting. Your interest and your attraction were not piqued enough to even warrant a second date.

In relationships, you have reached a new level of stagnation. There’s a stormy road ahead and no one is making a move to prepare for it, or look for a better and safer route. It’s almost as if you want to ride this one out and just hope for the best.

Ace of Wands Tarot and Money

That’s not limited to just cash, though. It can also signify a new or better job opportunity, or free trips or vacations.

The Ace of Wands tarot is also the card for entrepreneurs and visionaries — people who look to the future and people who think out of the box. If you’re one of them, now is the time to strike! Turn that dream into a reality and start enjoying the fruits of your labor.

Ace of Wands Tarot’s Meaning for the Future

When the Ace of Wands tarot is in the future position, expect to have your big break. Expect to have more blessings. It may look a lot like luck or circumstance, but this is actually your own doing.

You may want to change a few things here and there so that when it happens in the future, you will not be as surprised or as shocked. You will be expecting it.

The Ace of Wands tarot is the card of brand new realities and opportunities. Make sure that you make the most out of every opportunity so that your future will be busy and full of great and wonderful things!

Is the Ace of Wands a Sign of Good Luck?

The Ace of Wands is a minor arcana card that is strongly connected to the concept of good luck and positive news coming your way.

It also signifies the idea of new beginnings that will all be to your advantage, so it is quite clear that the future will be brighter than you could imagine if you initially draw this card in the upright position.

The positivity and good luck is going to cover each and every aspect of your life.

It can represent new relationships, or a new dawn in one that you currently have where it becomes stronger and more powerful than before.

It may represent you reaching new heights in your career or being able to overcome previous issues that you may have been having.

It can also mean that you are more likely to run into additional money without you even having to do that much in order to get it.

For your health, it can signify that you are able to overcome an illness or injury. It may also mean that you will receive good news about tests that may have been concerning you.

From a spiritual point of view, you may be about to venture forth on a new spiritual path that is certainly going to be blessed and open up new doors.

If you then draw the Ace of Wands in the reverse position, then it does not automatically mean that you are going to be struck by some bad luck or bad news.

Instead, it has a tendency to point towards there being some delays in what you are wanting to achieve and do rather than something just never going to happen at all.

You may also find this interesting:  Four of Swords Tarot Card and its Meaning

It may also indicate that you do not currently have the desire or drive to achieve things, but that does not mean that it is always going to be like that.

With this, it can mean that you have some kind of mental block over things that you ultimately need to work on.

Your energy may also be lower than it should be, and this is then going to put you under additional stress and strain that may be difficult for you to deal with.

While it may sound depressing to draw the Ace of Wands in this position, it by no means translates into your life taking a negative turn.

Instead, it is far from predicting doom and gloom for you but rather you are going to have to take a look at yourself in order to change things for the better, or life will just continue to be tough.

So, the Ace of Wands is indeed a sign of good luck, but this only applies when you have drawn it in the upright position.

Just remember that if you do draw it in reverse that it does not automatically mean that everything is turned on its head or the complete opposite as that is not the case.

With this, see it as more of a helping hand and some gentle advice on things instead of creating a dark cloud over your life.

My Final Thoughts on Ace of Wands Tarot

Thinking of signing up for acting classes? Do that! Planning to do some changes in your home garden? Start digging! Itching to write that memoir? Get writing!