Seven of Wands Tarot Card and its Meaning 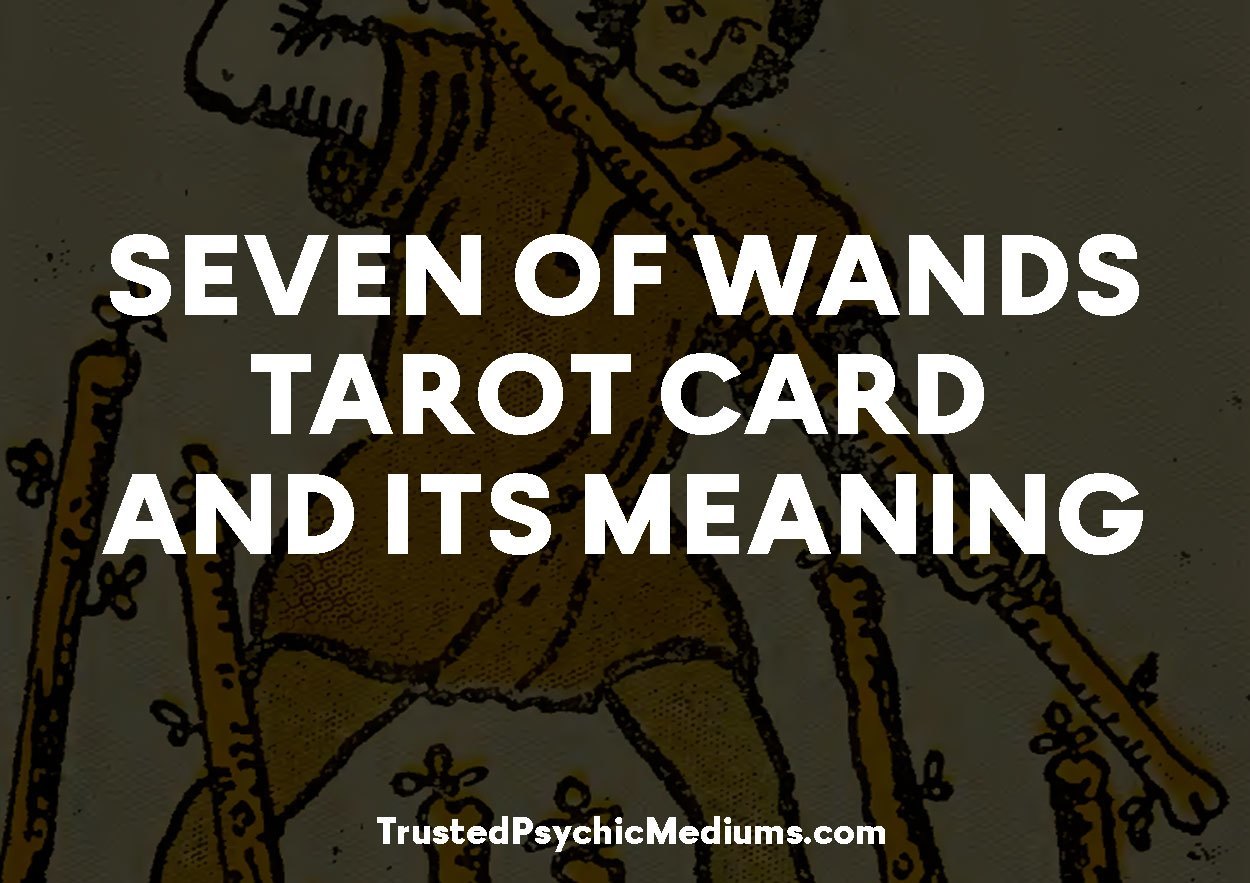 The Seven of Wands tarot is the card of challenge, competition, and authority. It’s all about perseverance and defense, derision and communication.

It signifies taking a stand and contemplating opinions. It denotes cautionary action and accountability.

The Seven of Wands tarot is depicted as a man standing on top of a hill in a defensive position. From the expression on his face, he is being challenged by people who are just below the hill.

They wish to launch an attack and take what the man has. The man will not let anyone approach, and he will use force if he has to.

Like what the image in the card is trying to suggest, you may be feeling some opposing forces who are threatening to go up against you, or challenging you to achieve the same level of success, or more. This is quite similar to the Three of Wands or Nine of Wands.

Competition is stiff, and you realize that you have to keep proving yourself to keep and maintain your stature.

When you’re successful and have already achieved so much, there will still be people who will try to bring you down.

Understand that for every person who is happy for what you have achieved, there is another person out there who resent you for it.

The Seven of Wands tarot represents challenges that must constantly be overcome to continue enjoying success.

The road to victory is fraught with trials and hardships, and you must draw upon your strength and self-confidence to keep walking forward.

The Seven of Wands tarot indicates that you must keep your composure and your resolve, especially when situations are less than ideal. You must remain firm and hold your ground.

It will be easier said than done, but you did not reach that level of success by being soft and gentle. You possess the power and determination to accomplish this, just like the King of Wands.

Keep fighting. You’ve got this!

However, no matter how great your efforts, you still won’t be able to win everybody over. You just can’t please everyone.

You can’t force everyone to like you. There will still be bashers who have nothing good to say, so just brush yourself off and carry on!

You can’t force things right now, no matter how good or noble your intentions. Just keep doing what you’re doing and continue your journey to happiness and success. In the end, it’s their loss and not yours.

Seven of Wands Tarot and Love

When it comes to love and relationships, the Seven of Wands tarot indicates that you are fighting for the right thing.

You know he’s the right man for you, so you will go to great lengths to protect him and defend him. You will try your best to build him up to your family and friends.

You will do damage control when necessary. You will make up excuses if the need arises.

If any other woman makes a move or even shows a hint of interest on your lover, you’re quick to ward them off with stinging words or threats of bodily harm.

If someone is overly critical of your relationship, you do your best to put the relationship in a healthy and positive light.

If work or hobbies take too much time away from your lover, you organize everything in your calendar to squeeze in more time for him.

In other words, you will do everything in your power to protect and save your relationship from the bad elements that threaten to break the two of you up.

The Seven of Wands tarot also denotes that you and your partner are working very hard to keep the relationship afloat.

There are many obstacles along the way, but you’re both in it for the long run. No one’s abandoning ship, and that’s really terrific news.

With the Seven of Wands tarot, your partner sees you as someone extraordinary, strong, and independent. Your determination is awe inspiring.

You have his full confidence that you will be able to withstand the storms that will batter your whole being, and you will emerge still standing.

When the Seven of Wands tarot is placed in the reverse position, it signifies that you are standing on shaky ground.

You are no longer sure where you stand in your relationship, or where the relationship is even going.

You are coming from a relationship where you are unable to speak for yourself or stand up for yourself. You and your lover are slowly giving in to the powerful forces of those who want to see you break up.

The love that was once happy and strong is now growing weaker and more discouraging.

Seven of Wands Tarot and Money

When the Seven of Wands tarot appears in your reading that deals with money or wealth, it signifies that you will earn a substantial amount of money.

This can be in the form of bonuses or even extra income.

Think carefully on how best to spend or invest them. Be wise and think long-term.

Seven of Wands Tarot’s Meaning for the Future

With the Seven of Wands tarot in the future position, always remember to keep on believing in yourself. The odds may not always be on your side, but you are more than capable to beat them.

Always be courageous, and fair, and kind. Your future will just be exactly what you deserve.

The Seven of Wands and its Meaning for Health

The Seven of Wands is a minor arcana card that is largely associated with the idea of fighting in your corner and standing up for whatever it is that you believe in.

This does mean that there is a real sense of determination and willpower associated with this card, which may very well bode well for you when it comes to it being drawn in your health sector.

At the same time, it can also indicate that you are under some kind of attack, which may end up being of some concern to you.

However, you are resolute when it comes to defeating it, and there is little doubt that the future does indeed look far brighter than it may have otherwise been.

In the upright position, the Seven of Wands will often indicate that you are fighting to overcome some kind of illness or injury.

Alternatively, it can refer to an illness that you need to battle against in order to keep it all under control as best you can.

While both of these answers may not be the most positive of things, the card does also state that you are going to be driven and determined enough to be able to actually fight back against whatever is wrong and that you will have the energy to do so.

This is certainly far more enlightening than you may have initially thought when you encountered the card in this particular position.

However, if you draw the Seven of Wands in reverse with your health sector, then this is not always going to be the best of omens for you.

In fact, it can often signify that you are in the process of giving up in some kind of battle against an illness or injury and that you feel it is all a lost cause.

Alternatively, it may show that things are spinning out of control for you and there is a need to ramp up what you are doing in order to get things back to how they were.

There can also be a sense that the treatment you are currently receiving may not be the right one for you, and things may need to be reassessed and treatment changed in order to then start to overcome the problems that you have been facing.

The Seven of Wands is certainly a bit of a mixed bag when it comes to your health, and it all depends on whether it is drawn in the upright position or in reverse.

Clearly, you want the former rather than the latter, but then the reverse may be the kind of wake up call that you have been searching for.

Perhaps the best aspect is the way in which it can show you have fight in you to tackle whatever medical ailment it is that you have.

Your desire to never give up is going to serve you well, as stated by this card, so you might indeed manage to get out of the other side of all of this with your health intact.

My Final Thoughts on Seven of Wands Tarot

What the Seven of Wands tarot wants you to know is that you should always be clear on where you stand in people’s lives.

Share whatever positivity and kindness that you can, and if people still hate you for it, they don’t deserve a place in your life.

Pay them no mind and move on to fulfilling your dreams.

The Seven of Wands tarot wants you to stop for a while and reflect on the following: What are the lengths that you will go to just to preserve what you have right now?

What are the advantages of being in your position?