Nine of Wands Tarot Card and its Meaning 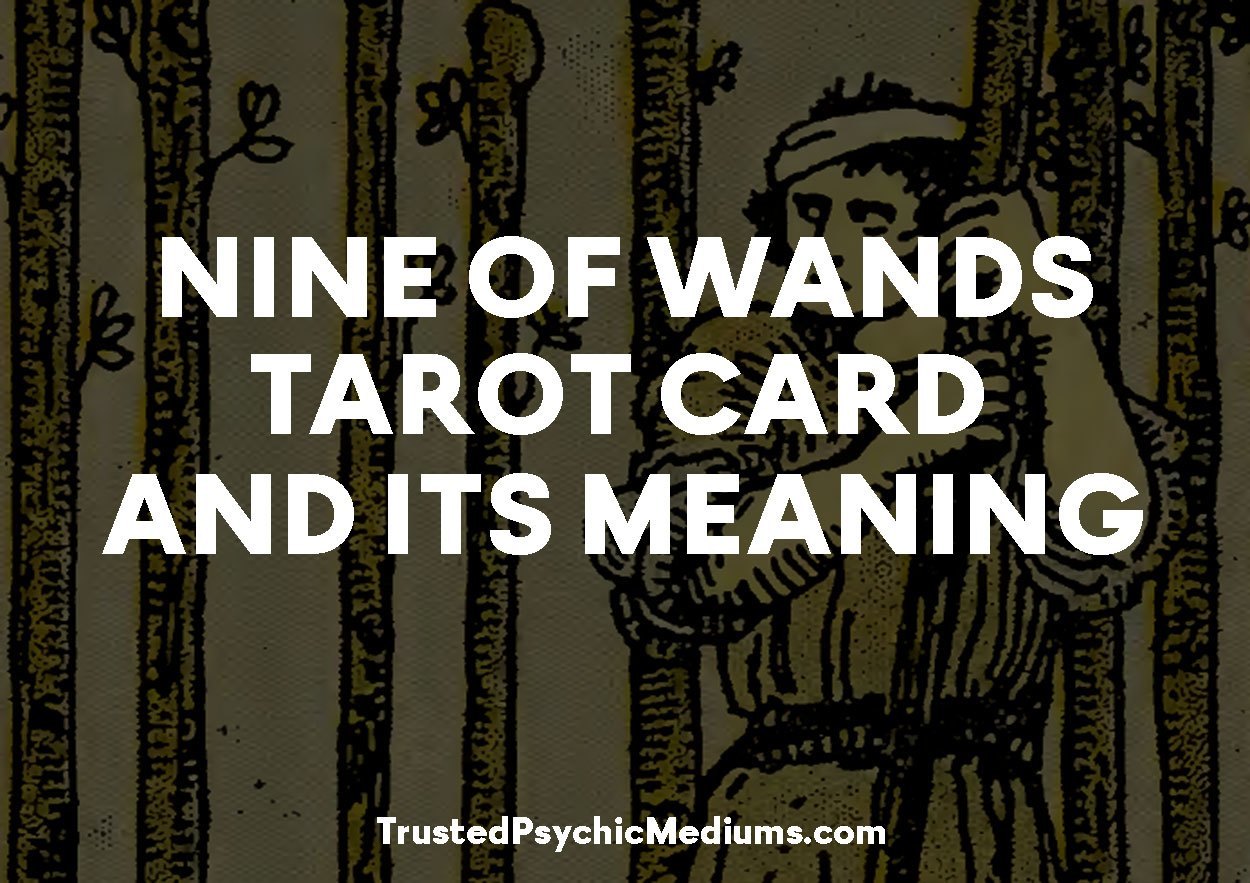 The Nine of Wands tarot is the card of courage and resilience. It symbolizes heroism and patriotism, determination and commitment. It represents a test of faith, or defending a cause.

It’s about protection, infallibility, and reliability.

The Nine of Wands tarot is depicted as an injured man clutching a staff. He is battle weary, but the look on his face says that he will go to battle again anytime should the need arise.

He is protected by a wall of wands that surrounds him, but the expression on his face shows no trace of fear or weakness.

He stands up for his beliefs and remains committed to the cause. He is determined to reach victory and overcome all obstacles, big and small, to reap what you truly deserve just like the Ten of Cups.

When the Nine of Wands tarot appears, it suggests that you are nearing completion of a particular task or a project, just like the Ace of Pentacles.

But due to unavoidable circumstances, another set of challenges or setbacks pops up.

This can rattle and unhinge you for a moment, but know that you have the talent, the skills, the intelligence, and the resources to overcome this difficulty. Don’t you give up now!

The Nine of Wands tarot is just the encouragement and the ray of hope that you need to keep moving and keep trying.

These challenges that are being presented to you now are the same things that will bring you to your bright future.

Consider the Nine of Wands tarot as a final test or a final challenge before you reach the culmination of all your hard work, to reach the state likewise to the World tarot card, for example.

It encourages you to be flexible and strong in the face of adversity. It wants you to be patient and to keep your cool.

If at first you don’t succeed, try again. Don’t stop until you become successful.

The setbacks that you may have experienced in the past don’t mean that you will experience the same ones all over again.

Leave what belongs in the past right there. Work hard in the present so that you have a shot at a wonderful future.

Trust in your abilities and in what the universe has in store for you! Turn over a new leaf and just keep pushing on.

The Nine of Wands tarot also wants you to adapt a risk-averse approach. Take calculated risks.

Expect the worst but create strong back-up plans to minimize the damage. You need to be always one step ahead.

Nine of Wands Tarot and Love

When it comes to love and relationships, the Nine of Wands tarot simply tells you that you are prepared to face challenges.

When issues and problems plague your relationship, changes have to be made so that you can start feeling happy and inspired again.

You may be feeling broken and hurt, but you will not hesitate to overcome the hurdles that keep coming.

You are not letting your emotions get the better of you. Instead, you think about what will be the best thing to do for you and your relationship.

You may be suffering and hurting, but you’re just not ready to let go of your partner.

You and your partner may just be going round in circles, with nothing significant happening to the relationship. But you stick with each other and stay loyal to each other.

If communication has always been your problem, try to find a more relaxed and more natural way to talk about your feelings.

If money is an issue, try to come up with ideas to earn extra income together. Reach a compromise and set spending goals until you achieve a big break financially.

If you feel like you’re falling out of love, spend more time together and do all the things that you did when you and your partner were just starting out. Spice things up. Whatever it is, just try harder.

When it comes to feelings, the Nine of Wands tarot represents a pained and troubled mind. Did you say something particularly hurtful to your husband?

Did you lash out at your boyfriend and now regretting every bad thing that came out of your mouth?

Chances are he was hurt by your words, but if he can still find a way to look past the hurt and forgive you, he is definitely for keeps. You should hold on to him and make sure that you will take care of him and the relationship.

When the Nine of Wands tarot is placed in the reversed position, this indicates your strength is falling apart.

Your relationship problems are just too much and you can no longer handle them. You’ve had enough and you are finally choosing to leave. You are done crying and hurting.

Nine of Wands Tarot and Money

When it comes to money and finances, the Nine of Wands tarot indicates that worrying will not do you any good.

It will not make your money woes disappear, nor will it put money in your savings account.

It’s important that you keep a logical way of thinking and plan your course of action to get out of this financial slump. It will not happen magically overnight. You have to work a lot and sacrifice a lot.

But the good thing about this is that money can be earned. And if you work hard enough, you will earn enough to get you out of this predicament.

Stay strong and keep the faith. Better days are right ahead.

Nine of Wands Tarot’s Meaning for the Future

The Nine of Wands tarot in the future position signifies conflicts, but conflicts that you can easily overcome. Bank on your endless supply of inner strength and just soldier on!

The Nine of Wands and its Meaning for Health

The Nine of Wands is a minor arcana card that signifies you are only half way through a particular battle when you draw the card in the upright position.

There may be a point where you feel as if you are drained of energy, but the truth of the matter is that you only have to continue on for a short period of time to ultimately get what you have been aiming for.

Obviously, this is then going to have an impact on your health, and the Nine of Wands is quite specific when it comes to what it is trying to tell you at that moment in time.

For example, it is telling you that if you have been ill that your energy has indeed been drained when it comes to your attempted recovery.

You may also feel as if the entire thing has been pointless, but that is not necessarily the case.

Instead, the card is attempting to tell you that you need to somehow pull together your last remnants of energy in order to make that final push as that is going to get you over the top and to the other side.

You simply cannot afford to give up when you are so close to starting to feel better and be of the opinion that recover is going to be possible if you are just open and willing to carry on fighting that little bit longer.

At the same time, this card can indicate that you may be suffering from a recurring injury or illness or even something that is chronic and you have to take care over things.

In the reverse position, the Nine of Wands is going to mean that you are just simply unable to carry on fighting or even putting up this pretence that you are not suffering at all.

It may be time to let your guard down and allow help to come from other angles or possibilities because you cannot continue to pretend that everything is fine when that is clearly not the case.

Furthermore, this card in the reverse position can also be a far stronger indication that an old illness or chronic illness is bothering you and that this has been an on-going problem.

This is not intended to make you feel depressed or down as such, but there is no doubt that you have some serious problems that have to be addressed.

So, you do have two different ideas to deal with when it comes to your health and the Nine of Wands.

The recurring theme is that you are exhausted with the battle and trying to get better, but while the upright position tells you that you can do it, the reverse position is certainly more depressing in its prediction.

That is not to say that you are going to become even iller than before, but you certainly need to be able to take stock of what is going on as quickly as possible.

My Final Thoughts on Nine of Wands Tarot

Don’t let your fears and worries cloud your judgment or overwhelm you. Take it one step at a time, slowly but surely.

Sometimes, your fears only look and sound scary in your head. In real life, it’s not so bad.

But when it does get overwhelming, you don’t have to force yourself to do it by yourself.

Ask help. Never be afraid to ask for help.

It does not mean that you’re weak. It means that you’re brave enough to acknowledge that there are just some things in life that you cannot do on your own.

Some questions that the Nine of Wands tarot wants you to reflect on: Are you ready enough to take this project to its final conclusion? Can you do it on your own, or will you be needing help?