Seven of Swords Tarot Card and its Meaning 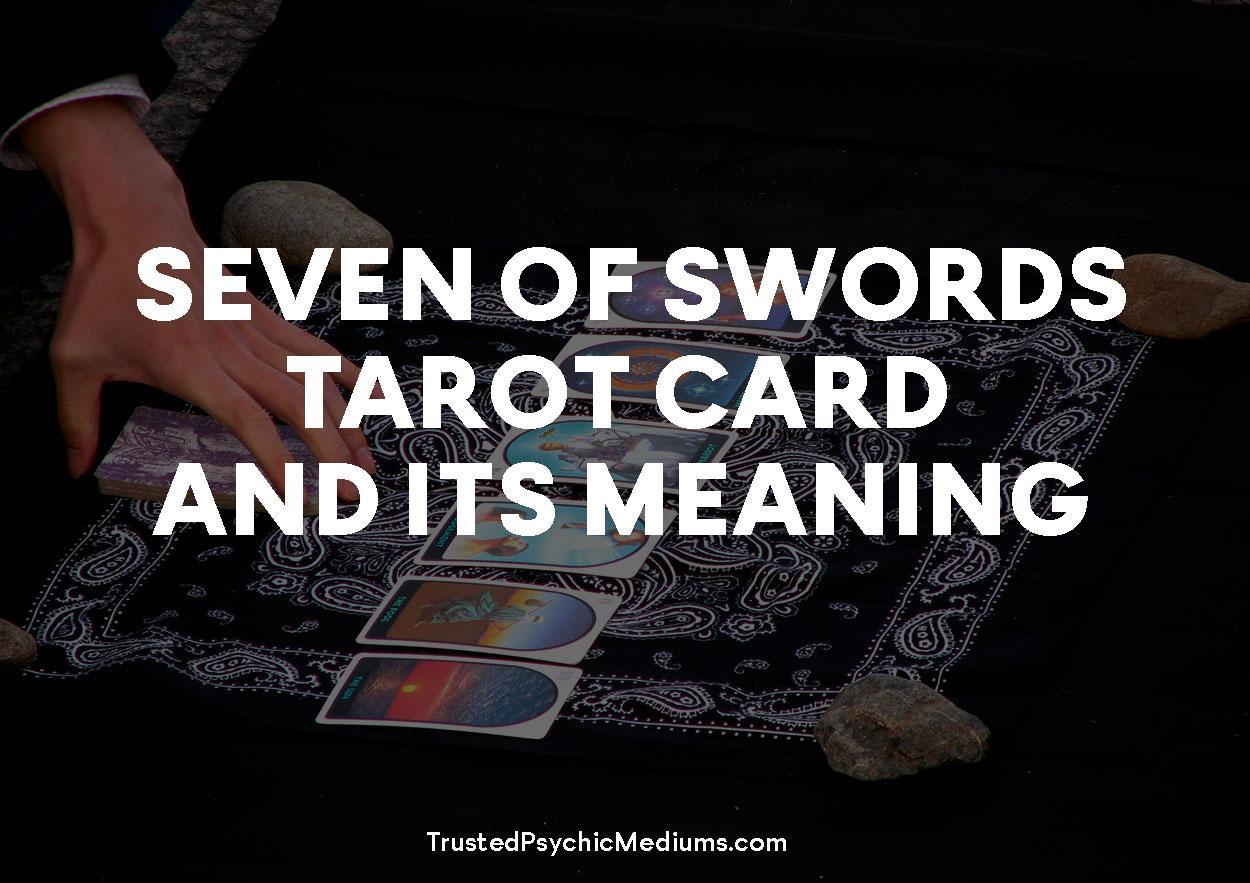 The Seven of Swords tarot is the card that symbolizes betrayal and deception, unlike the Two of Pentacles which is a symbol for partnerships and sharing.

It also represents indecision and impulsiveness. It can also indicate ignorance and irrationality.

The Seven of Swords tarot is depicted as a man moving stealthily away from a military camp with five swords in his hands.

He looks very pleased with himself for having gotten away without being seen. What he doesn’t realize is that a few distance away, a soldier has already spotted him, sword at the ready!

The card denotes the challenge of getting away with something without anybody finding out. Remember that no secret remains a secret. Sooner or later, the secret will be revealed whether intentionally or not.

The Seven of Swords tarot serves as a warning when it comes to using devious means to get ahead or gain advantage.

There will come a time when it can’t be avoided. If you really must do it, know that there are consequences for it.

The Seven of Swords tarot also indicates your natural tendency to sneak away from a situation that’s no longer beneficial to you.

Instead of dealing with it face to face, you bolt to the opposite direction. Running away from the problem is the quickest and easiest solution you can think of.

The Seven of Swords tarot also wants to tell you that you need to be cautious and vigilant and avoid falling victim to acts of deception, betrayal, or treachery.

Watch out for people who have their own agenda. Know when you’re being taken advantage of.

The Seven of Swords tarot also indicates your desire to discover the world, and to look into personal issues on your own, just like the Page of Pentacles.

Before you start pushing people away, make sure that this is the best path for you to take. More often than not, two heads are better one.

Seven of Swords Tarot and Love

When it comes to love and relationships, the Seven of Swords tarot indicates that something is happening behind your back.

Something real fishy is going on.

If all the senses in your body are telling you that your boyfriend is cheating on you, you don’t need Facebook to confirm that he is, because he most definitely is.

If you think that there’s something more to the extra tight friendship that your husband and his best friend share, your hunch is probably correct.

If he can’t look you in the eye when you ask him where he’s been on a Saturday night, you better brace yourself for some bad news.

You can confront him about this, but don’t expect an admission. Don’t even expect a proper conversation about the topic.

He will defend himself and tell you what he thinks you want to hear. That he will never do anything to destroy what you have. That you’re the only one for him. That nothing’s going on.

But you know deep in your gut that he will use all the charm and the flowery words and the fancy gifts to get out of that sticky situation. He is the Seven of Swords, after all.

The Seven of Swords tarot also represents issues that your relationship is going through, perhaps like a real disappointment as written on the Eight of Cups.

It can be that you and your partner cannot see eye to eye. You’re not on the same page.

It can be that he’s secretly terrified of commitment and your relationship is a testament to that. It can also be that he is a pathological liar and flirt.

Whatever the problem is, you’re ignoring them.

When in the reversed position, the Seven of Swords tarot can be quite a positive card. This is because it denotes a confession of sorts.

If your boyfriend really is cheating on you, he will come forward and finally come clean.

It can also mean that your man is surrounded by temptation but he chooses to remain faithful to you.

Seven of Swords and Money

When the Seven of Swords tarot appears in a reading with regard to money and finance, it signifies that you have to make some difficult choices.

There’s a big possibility that you will lose a lot of money, so this is not the time to gamble or to lend money.

This can sound scary but remember that money can be earned. Don’t sacrifice your name, your integrity, and your reputation for a quick buck.

Earn your money the honest way, without having to resort to deceiving or betraying anybody.

Seven of Swords Tarot’s Meaning for the Future

When it comes to the future, the Seven of Swords tarot can be quite a useful card.

It indicates that there will be a source of frustration that will figure in your life, and you will use these feelings of frustration to change your situation for the better.

Adversely, this can also be someone or something that will try sabotage you.

If you overcome all the negative forces that are out to get you, you will come out ahead. You will be strong and successful.

Is the Seven of Swords a Sign of Bad Luck?

The Seven of Swords is a minor arcana card that is viewed in a rather negative light due to the influences, emotions and thoughts that are often inked to it.

This is a card that does have a certain blackness surrounding it, so from the outset it does appear as if this is something that is going to be closely linked to the idea of bad luck coming into your life.

What you have here is a card that is linked to the concept of deception, cheating, manipulation, trickery, left, and a general lack of caring about others.

It will also often be linked to the idea of some dangerous behaviour and incorrect courage which is then misplaced leading to poor decisions that ultimately result in something bad or negative happening.

It will also often point towards some behaviour being rather underhand in its approach and that this is then going to have a major impact on certain areas of your life.

This is primarily focused on the areas of your relationships and work where there may be some major trust issues related to what is happening in those areas.

However, this does not have to be linked to you being the one that is guilty of those negative afflictions.

Instead, it can also act as a warning that others you encounter in your life are those that you should be paying close attention to.

Basically, you may have inadvertently surrounded yourself with these negative emotions, and you have to be prepared to change things around or you will continue to be swallowed up by this blackness.

If you draw the Seven of Swords in reverse, then there can be a sense of you coming clean with your conscience and the benefits that will then come with effectively clearing the air in this way.

It may also be a case of confession being good for the soul and freeing you from those bad emotions that are directly linked to having done something that you do regret.

At this point, it can also tell you that you are being blind to the actions of others and are unable to see the wood for the trees.

You refuse to see what is going on and the way in which it is affecting you, so in this instance it is a clear warning that something is amiss and you have to be willing to counter it wherever possible.

So, the Seven of Swords is certainly more in line with negative events and emotions which can then spill over into you encountering bad luck in your life.

It will cover each and every aspect with your relationships and health coming under attack unless you are willing, and able, to undergo the chances that are going to ultimately prove to be necessary.

While drawing this card is not a pleasant experience, taking it as a warning is going to end up being rather fruitful for you, so it will always be possible to turn a negative into a positive.

My Final Thoughts on Seven of Swords Tarot

Cheaters abound, so be on the lookout for the cheaters in your life. These can be the small-time cheaters who never return extra change, or those who park in the handicap slot at the parking lot.

They can be the big-time cheaters who engage in extramarital affairs, or those who scam people for their own personal gain.

Protect yourself and rid them from your life. Who knows what else they’re doing when you’re not looking?

Continue doing the honorable and honest things that you do and you don’t have to worry about karma coming to you.

Some questions that the Seven of Swords wants to ask you: Have you ever done something you’re not proud of, and did you think you got away with it?

How has your action affected other people close to you? Will that action come back later to get you?