The Devil Tarot Card and its Meaning 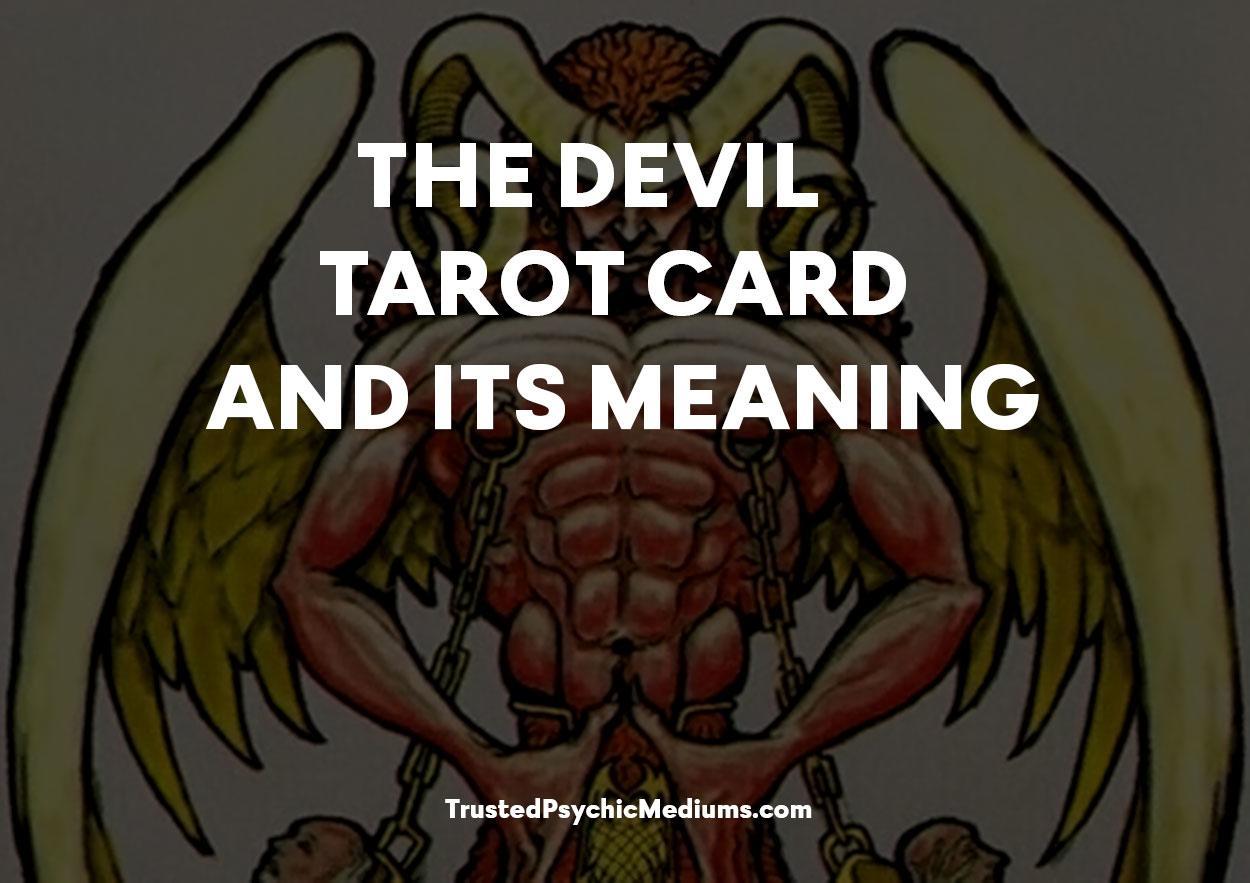 The Devil in the tarot is a scary-looking card. But more than the supernatural overtones, the Devil symbolizes the human aspects, and all the dangerous and negative aspects of your life that you are disregarding.

It speaks of change, either like the Tower or the Wheel of Fortune card, inevitability, addiction, materialism, bondage, and detachment.

The Devil is about control, deception, and illusion, just like the Moon tarot.

He wants you to believe that money and things can provide you the happiness, love, and contentment that you’re searching for.

He has no morals, nor does he believe in principles, and he wants you to follow in his footsteps.

With the Devil, it’s quite simple. The end justifies the means.

The Devil card is number 15 in the deck and is ruled by the zodiac sign Capricorn. The card of the Devil shows a Satyr (half man and half goat) with the wings of a bat.

This is symbolic in the sense that the goat is considered an impure and lustful animal, and the bat sucks blood from its prey.

The Devil is fixed in a spellbinding stare, rendering anyone who comes near him powerless and weak.

On top of the Devil’s head is an inverted pentagram, symbolizing the dark side, dark magic, and the occult.

By the Devil’s feet, chained to the platform and without any clothing on, stand a man and woman.

The chains hang loosely around their necks, symbolizing their voluntary bondage to the Devil.

The horns on their heads, which look very much like the Devil’s, also indicate that they are becoming more and more like the devil.

You will see that they also have tails on their backs, a symbol of their animalistic tendencies.

They all stand inside a dark and closed-in cave, representing how the Devil exists in the innermost recesses of the mind that only catastrophe or change can penetrate.

The Devil symbolizes a negative influence that’s coming your way, which is probably brought about by your natural tendency to agree.

The Devil usually appears when there’s an intensely negative behavior, environment, or relationship, and it acts as a warning.

It often reflects real life addictions and dependencies like lovemaking, alcohol, drugs, bad boyfriends, abusive husbands, and many others.

You think you need them and you will do anything to get it or to keep it. It can give you immediate gratification but you choose to ignore the long term damage to your life.

Unless you put a stop to these bad and evil ways, you will not like the consequences. You need to cut yourself loose and see them for what they truly are.

The Devil wants to trap you in. That’s what he does. The Devil signifies a part of your life where you feel like there is no escape, or a chance to escape.

What kind of trap and how you can avoid it will depend on where the Devil appears in your reading. The Devil does not predict your downfall, only the need to exercise caution.

The Devil Tarot and Love

The Devil is a card of deception and lies, so it does not bode good news for a love or a relationship. It represents problems of insecurity, or jealousy, or over dependency, or the loss of your sense of self.

If you are in a long-term relationship, you may have reached that point where you just find him plain annoying instead of quirky, obnoxious instead of funny, and cocky instead of opinionated.

It’s also possible that the relationship has reached a plateau and nothing exciting or new or positive is happening. It’s making you restless.

It’s making you think thoughts that you know are worthy of back to back face palms.

If there’s anything that you need to be thinking about, it’s how you and your man can weather this storm.

Not that guy on Tinder. Not the Facebook Flirt Friend. Not the friend with benefits.

If you’re single and ready to mingle, the Devil card means that you are reaching that almost embarrassing point of desperation.

Guys can smell desperation from miles away, so stop posting all those half naked selfies on Instagram.

Stop pinning your dream wedding ideas on Pinterest when you don’t even have a groom. Stop going out with unsuitable guys and having meaningless intercourses.

Enjoy this single phase in your life and make yourself a woman that any man will want!

In a relationship setting, the Devil can also represent not trusting your judgment, or being blinded by past dishonesties.

The animosity and the emotional baggage is carried over to your new relationship and affects everything in it.

The Devil can also indicate your tendency to be harsh and argumentative, which in turn creates too much anxiety, dread, or drama. No wonder your man is terrified of you!

The Devil Tarot and Money

The Devil in matters relating to money or finances can mean you are not working hard enough or earning big enough to be spending money way too much like that.

You spend way too much money on shopping, gambling, and small but unnecessary purchases. If you don’t stop now, you will be broke in no time.

How successful or unfortunate you are with your finances is entirely your own doing. Curb your appetite for swiping credit cards and going to sales and get your financial goals back in order.

The Devil Tarot’s Meaning for the Future

When the Devil appears in the future position, consider it a warning.

o turn this in your favor, avoid putting yourself in a position where you cannot say no, especially to destructive and unhealthy habits or bad situations.

This change will not happen overnight. It requires you to say no to people and things that you couldn’t live without in the past. You will have to have nerves of steel if you want to move forward.

You have to ask yourself the right questions and give the right answers to strengthen your resolve to make your life better. The life that you deserve.

You will have to find the beauty that resides in you and start projecting it to the universe, so that the universe will lay it out for you. The Devil may denote negativity, but it also signifies positivity.

More than anything, it’s a wake-up call for you to break free from the chains holding you down. When you have the will, anything is possible.

Is the Devil Card a Sign of Bad Luck?

The Devil card is a major arcana card that has a tendency to make people feel as if everything is going to be bad and working against them.

This fear means that there is a sense of dread if it is drawn in any position, but the truth of the matter is that this is a card that is not as bad as it may seem.

In the upright position, it can represent a feeling of being trapped in your situation and that there are external sources that may be restricting you in some way.

It is entirely possible that you feel as if you are powerless to do anything, but there is the argument that this is what the card wants you to feel.

At the same time, it can indicate that you are too obsessed with materialism and there is the idea of cheating, being dishonest, and generally being quite a negative individual.

However, the truth is that you are not actually any of these things and it is merely what the Devil card is telling you as its very own truth.

When you look at the card in the upright position, then it is easy to see how some people would view it as being a sign of bad luck, but it is bad luck that you are bringing onto your own self due to the way in which you are viewing things in a negative manner.

On the plus side, if you draw this card in the reverse position, then it can be a sign that you are now aware of what is going on and understand the different things that have been holding you back.

There is a sense of you being able to see the light at the end of a particularly dark tunnel and that things are going to turn out for the better in the very near future.

It can also show that you have been able to avoid a negative and potentially harmful event and that this is something you should be grateful for.

It is more in line with the idea that luck is more on your side rather than working against you and that you have the self-awareness to be able to identify these negative areas and avoid them completely.

Overall, even though the Devil card does come with some negative connotations, it will not necessarily be as difficult or dangerous as you may have initially thought.

Instead, there can be some positive news coming from it, so while there is some bad luck, it is not going to be the complete disaster that you might have initially been expecting.

So, if you do draw this card, then rest assured that things are going to be better for you than you might have hoped.

It is not all doom and gloom and there is less to fear about it than your mind is telling you just as long as you make the correct decisions rather than working your way into a more difficult situation.

My Final Thoughts on the Devil Tarot

Are you feeling stuck or controlled? Are you feeling hopeless, desperate, or pessimistic about life in general? Look within yourself and ask who is responsible for this feelings.

You may think that they are brought about by your bad marriage, or your unhealthy love for vodka and lovemaking, or your chain-smoking, or your food bingeing, or your hoarding.

But you know what? No one else is responsible but you.

Now is the time to act on it. Quit making your excuses. You don’t love your life now because you made it unlovable.

Stop wreaking havoc in your life, and the first thing that you need to do is to end all the bad habits and bad behaviors.

Remove all the bad juju in your life that cloud your judgment. Repair the good relationships that have been damaged by your bad choices.

The Devil wants you to ask the important question. Are you ready to let go of the bad life and start living your best life?