The Tower Tarot Card and its Meaning 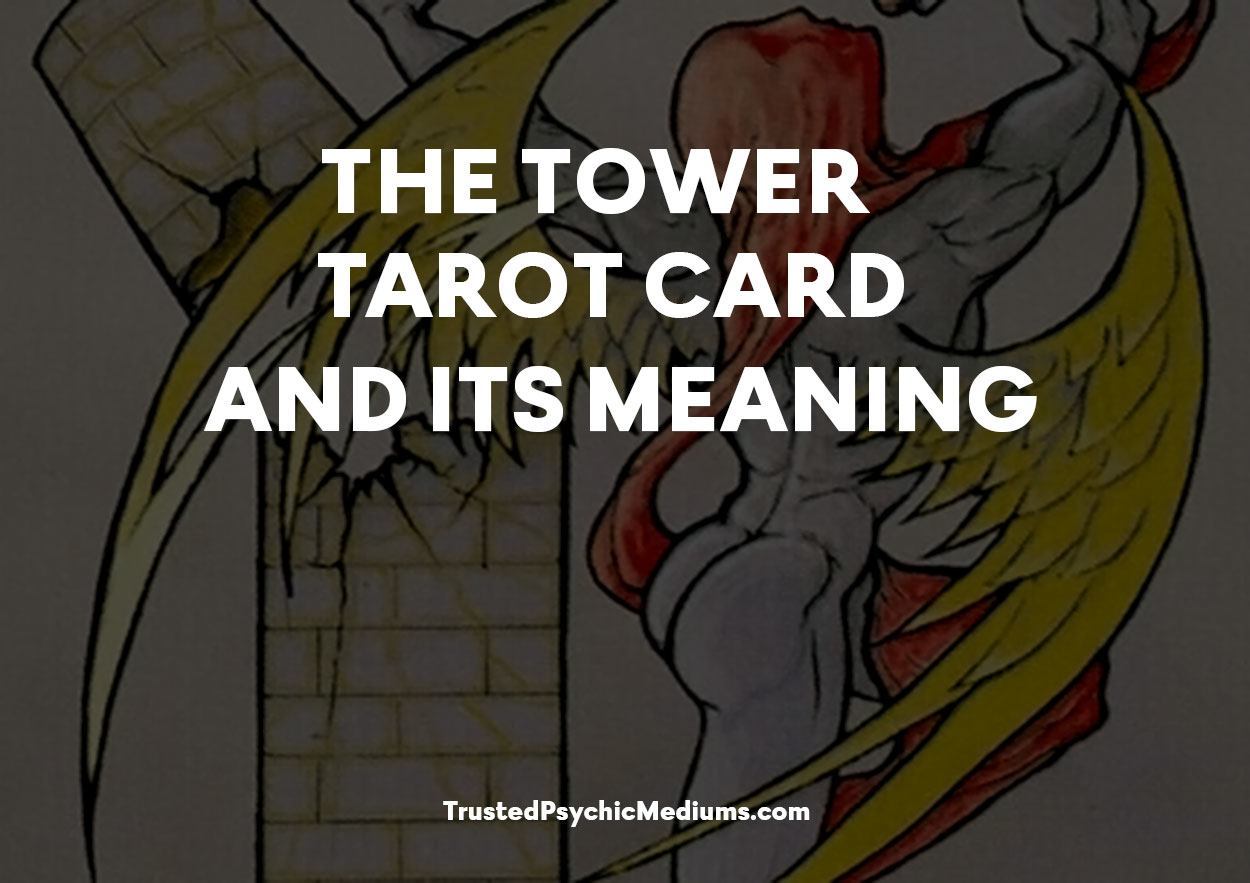 When the Tower appears in your tarot reading, this can signify a sudden shift or a sudden change, just like the Wheel of Fotune. It can signal a coming upheaval, disaster, or revelation.

The Tower is closely associated with the planet Mars. The image on the Tower tarot card is dark and disturbing. The tower stands tall and proud on top of a jagged mountain.

It signifies darkness and devastation on a physical scale, and ambitions built on deceit and lies.

Flames leap out of the tower’s windows while lightning strikes. The lightning represents the glimmer of truth or a spark of inspiration that attacks the foundations of ignorance and false reason.

The direction of the lightning strike is symbolic of heaven coming down to earth, of spirit to material.

People are jumping out of the windows, falling head first, to escape the chaos and destruction. And the dark clouds represent the clouds of adversity and misfortune that hang above everyone.

The Tower is a card that denotes war. It is ruled by the planet Mars, after all. War between webs of lies and the swift flame of truth.

It’s about shocking revelations and shocking truths. It’s about things you have always believed were real turning out to be nonexistent.

It represents the time in your life when your foundations are shaken and put to the test. Your marriage can break apart. Your friends can wage a war against you. Your family can turn against you.

You can lose your job. Your business can close. You can figure in an accident. You can be a victim of a crime.

The changes that the Tower brings will be harsh, severe, and traumatic. They will take control out of your hands and you will be powerless to stop the onslaught.

The Tower can also signify ego and how superior you consider yourself to other people.

When your Tower of ego and self-importance comes crashing down, you are forced to face the truth about yourself.

You see yourself in a different light, and you experience a major change in your consciousness.

In essence, The Tower is an unexpected wake-up call. It issues a grave warning. It forces you to rattle your chains and focus on the present.

When the Tower pops up in your readings, catastrophes can happen, and the only thing you can do is let it happen.

Release and let go. What’s important is that the breaking down of your foundation, no matter how devastating, will allow you to find the truth, and help you determine what else in your life is real.

The Tower Tarot and Love

For love and relationships, The Tower means that there is a change swiftly taking place. Which means you can uncover the secret life of your husband.

Or bad debts you had no idea existed. Or a child your partner never told you about. Or the fact that you’re adopted. Or that you’re going to lose your house and your business.

The Tarot represents disputes and disagreements, and dreams shattering, and parting of ways. This, in some way, is left in contrast with the Fool tarot.

Under these circumstances, though, the attitude that you need to adopt is one of resilience and hope. You must work on your strength and get past all the darkness so that you can start rebuilding.

The Tower Tarot and Money

It’s no time for risky investments and gambling when the Tower appears. But you really don’t need a tarot card to tell you what a wise and unwise investment is.

You should already know this as a fully functioning adult.

But when the Tower is there, you have to be extra careful and extra critical of your dealings. You can end up broke, or worse, in jail, just like the Five of Pentacles. Remember, swift changes.

That’s a broad spectrum, so don’t be foolish with your choices and stupid in your decisions.

The Tower Tarot’s Meaning for the Future

When the Tower appears in the future position, it’s a warning. And because you have been warned, it won’t be so bad or so unexpected when it happens.

You know what’s coming and you can prepare yourself emotionally, physically, mentally, spiritually, and even financially. No one knows when it will happen.

It can be sooner or later than you think. What’s important is that you see it happening in the future. Some preparation is better than no preparation at all.

The Tower Tarot Card and its Meaning for Health

The Tower tarot card is a major arcana card that, in the upright position, is one that you are simply not going to want to draw at any point.

Quite simply, it is a disaster if you do because this is a card that is linked to the idea of absolute chaos, trauma, violence and just general destruction.

It can be pretty difficult to find anything that is of a positive nature when you draw this card in this position.

Of course, that is then going to make you worry about your health and if you do draw it in this sector, then it is attempting to tell you a few things that you might want to take some notice of.

For example, it may indicate that you have had a sudden illness, or things have changed unexpectedly for you.

If you are pregnant, then it can be a sign that this is going to be a difficult pregnancy for you to deal with and that there could be a number of problems connected to it.

You must take some care and make sure that you go for all tests and appointments to stop this from evolving into something even worse.

Furthermore, it can also indicate that there are some mental health issues to be addressed or that you are suffering a great deal of turmoil from an emotional point of view.

However, on the positive side, there is also a sense of some kind of renewal once you get through this particularly difficult period, so there is some light at the end of the tunnel.

If you draw the card in the reverse position, then what the Tower is trying to tell you is that there may very well be an illness or problem that you are either not addressing or simply just ignoring.

What it requires you to do is to face up to it and deal with it as soon as possible since this will have a profound impact on your ability to recover from whatever the problem may be.

It is really trying to advise you that ignoring it or turning a blind eye to what you are feeling as that is certainly not going to be the best course of action.

Overall, the Tower card is one that is going to primarily fill you with dread and worry, but it does not have to be as bad as you may have initially feared.

Yes, it can indicate that there are a number of potential health problems for you to deal with, and it can also point to you just not paying attention to what your body is trying to tell you, but it does not always talk about your health in the most serious of ways.

Perhaps you are best to view this card as acting like a shock to your system that will encourage you to take more care over your health so you do not then end up being caught out in one of the worst ways possible.

My Final Thoughts on the Tower Tarot

When you see the Tower in your reading, it’s okay to feel scared or upset. No one wants to see a symbol of turmoil or destruction in their cards, of course.

But it’s actually a good card to get because it will force you to examine your life and determine which areas of your life are based on lies and which ones are the real thing.

It asks you to come out of your little bubble of safety and security and ask the hard questions that you normally can’t ask yourself.

Now you can allow yourself to finally feel the sadness, the anger, the disbelief. Now you can face the issues you have been putting in the backburner for the longest time.

Now you can ask the questions that have been burning inside you for years.

It’s truly a humbling, sometimes humiliating, and oftentimes frightening experience. But completely necessary. When there’s destruction, there is creation, and vice versa.

What I Iike about the Tower card is that it stands for inspiration, reality, freedom, and release from the shackles that hold you down.

It slaps you with the harsh truth, and is all for honesty. Sometimes you have to hit rock bottom to wake you from your stupor. Tough love, oh yes.

But then you’ll finally get what the universe has been trying to tell you all along. You are your own knight in shining armor, and you need to weed out the lies and the fakes from your life.

Just like that kickin’ Kelly Clarkson song goes, what doesn’t kill you make you stronger. And you will be surprised at the amount of strength you hold.

And amazed at how you can pick up yourself from the rubble with hope and enlightenment in your heart.

When the Tower appears in your reading, ask yourself this: What structures or foundations in my life are falling apart? What’s the worst thing that can happen to me when they do?