The Magician Tarot Card and its Meaning 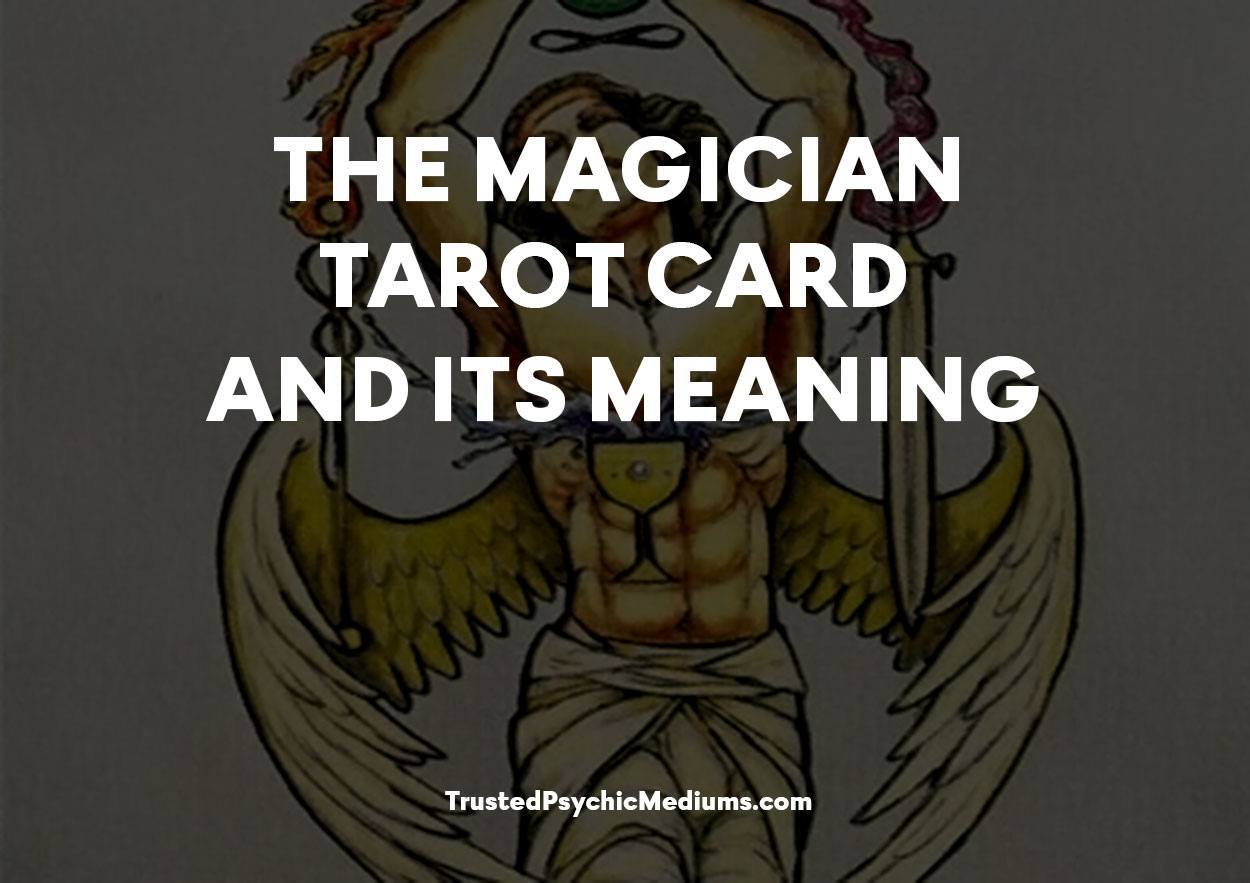 The Magician tarot card is a generally good and positive card, just like the Four of Wands. It’s usually associated with intelligence, logic, and skill, like the King of Swords.

It signifies the drive and the inner strength that propel you to turn your dreams into reality.

It also happens to be number one on the deck, which symbolizes beginnings, just like the Page of Cups. With this card on the spread, every day is a new beginning, and success is yours.

Depending of course on how much you want it and how much work you’re willing to put in.

The Magician works as a bridge between the spirit world and the human world. In his right hand is a staff that he raises up to the sky. The other hand points downwards to the ground.

Above his head is the eternity symbol. You can also see it around his waist, through the snake that’s biting its own tail.

Laid out before him is a table that holds the four suits representing the four elements: water, fire, air,and earth.

They symbolize the responsibility and the accountability of using the head and the heart in daily affairs, and doing the things that must be done to nourish the body and the soul.

The Magician is clothed in a white robe, which stands for purity and innocence. But the Magician’s cloak is red, which symbolizes worldliness and wisdom.

At his feet, aspiration is represented by the bed of flowers that are both beautiful and thorny.

The Magician Tarot and Love

When it comes to matters of the heart, you will want to have the upright Magician tarot card in your deck. It’s a wonderful card that denotes good things with the main man in your life.

The Magician is a serious man who wants to do good by his woman. He is the kind of boyfriend or husband who makes other boyfriends and husbands look average.

He has no other agenda other than making his woman happy and loved.

As a result, the relationship is easy, breezy, and stress-free, the love always burning and bright. Looks like you have stumbled upon gold at the end of the rainbow!

Sure there will be disagreements that can escalate to full-fledged fights, but don’t be too quick to change that Facebook relationship status.

Bad feelings will go away and things will be ironed out if you just talk your way through the problem together.

The Magician is greatly influenced by the planet Mercury, which rules the communication system.

So women will find it enlightening to have a man who knows how to talk about problems. A man who talks about feelings? Oh yes, please!

If he finds the need to pull stunts to get what he wants, he will not hesitate to do so. He’s just self-centered like that.

What he doesn’t realize is that he’s setting himself up to be the bad guy, and that his woman can see right through him, no matter how good he thinks he is at getting away with it.

For the single ladies, this is the best time to go out and meet new people. The Magician tarot can mean the start of a beautiful romance, which can possibly lead you to wear that exquisite white dress you have pinned on Pinterest.

If you’re already in a committed relationship, the Magician tarot signifies taking it to the next level. So maybe moving in together, getting a dog, planning a wedding, or having a baby! Exciting times for you, my dear!

The Magician Tarot and Money

The Magician tarot is an indication that you utilize your talents, skills, and tools at your disposal to accomplish what you want. In short, you have the power to make anything possible when it comes to your finances.

You may not see or feel it now, but the wheels are turning, and your good fortune is coming sooner rather than later.

An opportunity might present itself where you can showcase your talent and you can earn extra money from it. It can be a new job offer, a job promotion, or even some consulting work. It can even be a large inheritance!

Whatever it is, this new opportunity means making more money and having more money. Keep your eyes peeled and grab that chance to grow your money.

The Magician Tarot’s Meaning for the Future

The Magician spells success in anything that you set your mind on. Just like the name suggests, the Magician will make the impossible possible, and he will use any available resource to succeed.

It signals to strike now while the iron is hot, and to remain committed until it is completed. It is also an excellent card that symbolizes transformation, meditation, discernment, and wisdom, which your future will certainly hold.

The Magician is a major arcana card that, at least in the upright position, is a sign that you really do have the tools and ability to be a success in whatever it is that you want to do.

In actual fact, it states that the universe is going to be on your side and bringing all of the power to you to go ahead and meet all of the goals that you are setting yourself.

If this is indeed the case, then you can hardly state that this card represents bad luck.

There is also an idea that you are strong enough to manifest whatever it is that you want to do in life and you just need the confidence to achieve it.

Your career can become stronger and you have the ability to do this. Your relationships can be moving onto a deeper level of understanding than before and all of the positive things that they come with it.

Also, your health is making something of a comeback if you have been ill in recent times.

You might also be in the position of using some alternative healing to help you make further progress but there is no doubt that the future is looking substantially brighter than it was not that long ago.

If you draw the card in the reverse position, then what it is trying to tell you is that there are various opportunities awaiting you but you need to be aware of them in order to not miss out on them.

You also need to address the problem of self-doubt that you have probably been suffering from as this is holding you back in every aspect of your life.

At the same time, there is a feeling that you need to be more open and honest in your relationships or you need to be aware of someone potentially trying to manipulate you when it comes to your career.

Being on this state of alert is going to make a real difference to your ability to make progress even in your health sector where you need to accept your limitations or a willingness to go ahead and see the correct professionals should there be something wrong.

So, the Magician is not really a sign of bad luck whether you draw it in the upright or reverse position.

Instead, it can represent a number of positive things coming your way along with the very real possibility of you making progress due to the inner strength and belief that you have.

Even with the reverse position it is more of a warning to look out for people and what they are doing mixed in with the reasons behind it all.

This card certainly falls more on the side of good luck and positive things than the opposite happening to you, which has to be a great thing.

There is certainly no reason for you to fear it being drawn in either position as you can certainly benefit from it no matter how you look at it.

My Final Thoughts on the Magician Tarot

You are in good hands with the Magician tarot. You have a good head on your shoulders. You exercise control and calm even when things around you are falling apart.

You are grace under pressure. You are objective and optimistic, and you know that anything can be done, even if it doesn’t look like it. You’re clearly a force to be reckoned with, so keep doing what you’re doing.

Your sense of optimism is contagious, but just a word of caution. You possess the power to create and work on anything without fear or apprehension, but this can also lead you to feel overconfident, even egotistical.

Don’t be blinded. This same effortless capability can potentially cause strife or tension with friends or colleagues.

But the great thing is that you can use your talents in communication to iron out differences and stop them from happening again in the future.

Also, remember that the Magician can be a trickster. You have to make sure that you’re always a step ahead (or five, for good measure), and you’re not fooled by his gorgeous blue eyes, his stubborn hair, or his ability to whip up dishes worthy of a spot on the Food Network.

Make sure that he is the real thing and not just a lying, manipulative bastard.

But if the Magician in your life does turn out to be a lying, manipulative bastard, will you use that pretty little head of yours to do the right thing? I’m really dying to know!