Two of Cups Tarot Card and its Meaning 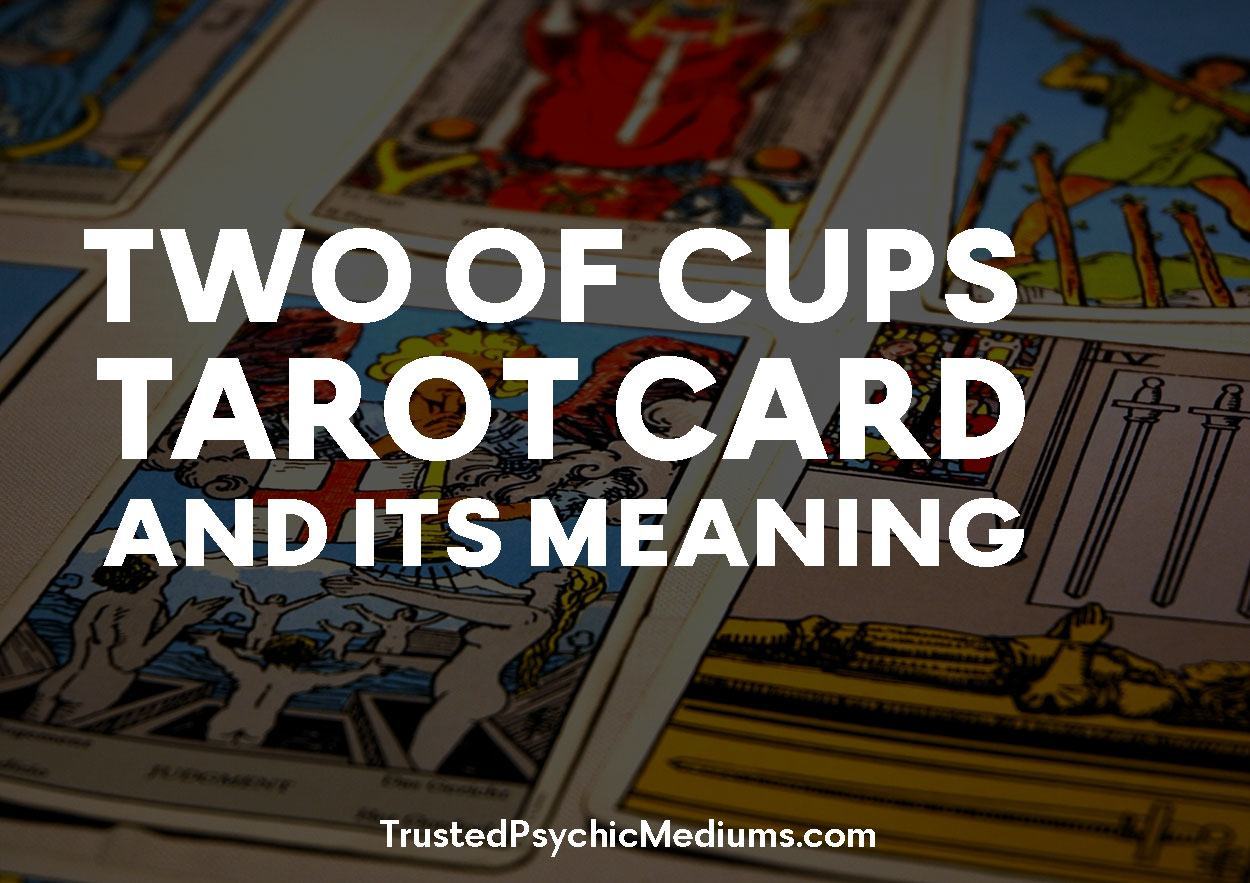 The Two of Cups tarot card symbolizes unions and partnerships. It’s about sharing, combining, and relating.

The Two of Cups card is depicted as a man and a woman exchanging or switching cups in a ceremony that looks very much like a wedding.

In between the man and the woman is Hermes’ caduceus, historically associated with trade, balance, moral conduct, negotiation, and protection.

The caduceus also signifies new rewarding relationships and partnerships, sense of honor, and respect and harmony.

On top of the caduceus sits a lion’s head, symbolizing fire and passion present in the physical attraction between the man and the woman.

Dark and light, and its coexistence are represented by the two snakes that seem to be climbing up the lion’s head.

The Two of Cups is also a card that signifies emotional attachments just like the Ten of Cups.

They can be attachments formed with a lover, a friend, a family member, a business partner, or a co-worker. Two halves are brought together to make one whole and beautiful union.

This beautiful union signals a new beginning that is full of promises, somewhat like what the Page of Cups symbolizes.

And like any new relationship, the days are beautiful and bright. There’s a spring in your step and a lightness in your heart. Anything is possible.

Like any new relationships, you are also cautious and vulnerable. You must be willing to take off the mask and let yourself be exposed and experience each other without any hesitation.

Only then can you truly feel the real connection.

The Two of Cups demonstrates the power brought about by two becoming one.

When two people truly connect and envision the future together, as partners, they fall in a mutually beneficial relationship where everybody gets to win.

The Two of Cups also puts emphasis on what happens to each individual in the relationship. To be loved, cherished, and respected by other people, you must first learn to do all these yourself.

When you know how to love and value yourself, people will naturally gravitate towards you and treat you with love and respect as well.

Two of Cups Tarot and Love

Two of Cups and Love can mean true love, deep commitment, and stable relationship, as opposed to the Four of Cups being dull and monotonous.

It symbolizes everything that one can hope to have in a relationship. But no, that doesn’t mean you can rest on your laurels, slack off, and hope that you and your partner will grow old together.

It just means that all the wonderful elements are there, and you only need to cherish and nurture for the relationship to thrive.

Given that the Two of Cups depicts a man and a woman in a wedding ceremony, it can indicate a marriage, a wedding proposal, or an engagement.

If you are looking for love, don’t panic. The Two of Cups often indicates a new romance headed your way soon. Be prepared to be seduced and swept off your feet!

If the relationship is young and new, the Two of Cups means you will establish closeness and trust in just a short span of time.

Two of Cups Tarot and Money

When it comes to money and finance, the Two of Cups represents balance.

You may not have a lot of money at the moment, but you know that you will have more than enough in the near future to pay the bills and live comfortably.

It can also represent the need to combine your money sources sometime soon. This applies to people who are in relationships living together.

Two sources of income can help you save a lot of money, as well as make better and more financially sound investments.

Two of Cups Tarot’s Meaning for the Future

Two of Cups in the future position means a good outcome. Especially if you want to find the person you’re going to marry, or you want to patch things up with your husband.

Or if you want a simple infatuation to develop into something more real and committed.

It shows you a glimpse of the universe at work for you and that other person, and everything is coming up roses.

Is the Two of Cups a Sign of Bad Luck?

The Two of Cups is a minor arcana card that is generally associated with the idea of things in your life being rather harmonious at this moment in time.

There is an overwhelming sense of peace and well-being surrounding this card, and that is not the kind of situation where you expect to be hit by a sense of bad luck.

In the deck, this is one of the most positive cards around. There is an idea of unity and togetherness as well as a real balance to your life in pretty much every single area.

There is a renewed sense of appreciation and significant respect for you and anything that you do, so there is still little idea of this card being attributed to bad luck.

For your relationships, work, and health, there is an idea of calmness surrounding the drawing of this card in the upright position.

It provides you with the opportunity to go ahead and build on things and to move into a much better position for your life to then carry on apace.

Drawing the Two of Cups in reverse position is also not as bad as you were perhaps initially expecting it to be.

Yes, things are certainly nowhere near as positive as they were when the card was drawn in the upright position, but it is far removed from you just being surrounded by doom and gloom.

It may indicate that there is a real sense of a lack of balance and harmony in your life and this is then putting you under more stress.

There may be an idea of inequality in areas or you are being abused in some way.

It paints a picture of arguments and threats which do completely destroy that idea of harmony that has been cultivated when the Two of Cups is drawn in the upright position.

However, while the reverse is certainly way more negative in its approach, it does not explicitly state that you are going to fall victim to bad luck.

Instead, it is trying to tell you to really be on your guard as things may not be as they seem, and you have to be able to stand back and observe this to then go ahead and make the correct decisions.

Overall, the Two of Cups is not a depressing card to draw, and this applies no matter if you are talking about it in the upright or reverse position.

Clearly, the upright is better as it does offer you a greater sense of serenity, but the reverse can be the kick that you need to go ahead and make the changes to your life that have been coming for some time.

In general, you should be quite content about drawing this card simply because there are so many others that are way more negative than this and that is something that you must be aware of.

If you manage to do this, and make the necessary changes, then life can be pretty good.

My Final Thoughts on Two of Cups Tarot

The Two of Cups is a truly positive card that’s always welcome when it comes to matters of the heart.

It is a very exciting and comforting card because it reminds everyone that you can love and be loved in return.

It’s the stuff hit rom-coms are made of. Guy meets girl. Guy and girl become a couple. Guy and girl move in together. Guy proposes. Guy and girl get married and have eight kids and live happily ever after.

Take a look around and really open your eyes. He might just be waiting for a sign from you and you might have been so busy looking at someone else.

You don’t have to make any elaborate plot to convince your man to propose to you. If it’s in your cards, it will happen. And the Two of Cups certainly says that it is going to happen for you.

The Two of Cups also represents the bonds that you form and the friendships that you forge with people in your life. These are the relationships that allow you to show who you really are.

These are the relationships that you should always value and protect.