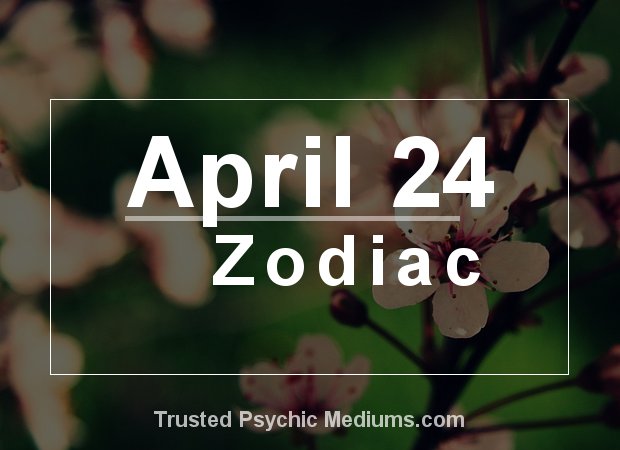 What is your Zodiac Sign if you were born on April 24?

If you are born on April 24th, your zodiac sign is Taurus.

As a Taurus person born on this day, you are known as a very dependable, capable, and calm person.

You have a strength of personality. When you enter a room, people naturally gravitate towards you because they feel that they can trust you.

They feel that their secrets are safe with you and that you’re not going to judge them.

Also, you believe in teamwork. You believe that if everybody chips in, you can start a project and it can get done. Not surprisingly, a lot of people consider you a natural leader.

Lovers born on April 24th are naturally attractive to members of the opposite gender. You may not be the best-looking guy or girl in the room, but people are attracted to you anyways.

When you open your mouth, you don’t necessarily strike people as the second coming of Einstein, but people still love to hear every word coming out of your mouth.

The reason for this is you have a very stabilizing effect on people.

Water sign people are very emotionally volatile. They are naturally drawn to people who can calm them down.

While you do have a lot to offer, be a little bit more discriminating regarding members of the opposite gender you let into your life.

While the lovemaking may be great, understand that romantic involvement does carry a lot of baggage.

If you don’t want to deal with the ups and downs and almost bipolar variations of the mood of a typical water sign, then you need to know where to draw the line.

Those with a birthday on April 24 are best suited for mediation or collaboration jobs. I

f your job involves some sort of arbitration, mediation, or collaboration, you would do well because you’re able readily put together.

You can enter a room filled with people with competing and opposite interests. At the end of the process, you would be able to get them on the same page.

Now, this doesn’t necessarily mean that they are each other’s best friends. Instead, they understand where they’re common interests lie.

They understand that when they work together, they are able to achieve more.

You are able to communicate this clearly to a wide range of people regardless of how different they look and the kind of background they come from.

This is a natural gift that you have and can take you quite far in life.

Taurus people are born stable. For the most part, stability tends to follow the Taurus personality.

You have a double portion of this, so to speak, because you feel that you really have nothing to prove. You’re not very big on making a big show of your capabilities.

You’re not very big on trying to hit people on the head with the fact that you’re so much superior to them.

Instead, you let your calm confidence come out and people can’t help but notice.

That’s why they try to constantly prove themselves and make a big deal of stuff.

You don’t feel that you need to do that. You don’t need to blow stuff up.

Things will find their pattern and guess what, you will be at the center of it. In many cases, you will be in total control of it.

Positive Traits of the April 24 Zodiac

You are the type of person who’s able to identify win-win situations.

This makes you a very attractive person because for the most part, people are looking to win at the expense of somebody else’s loss.

You make it a point to open everybody’s eyes to the possibility that people can win mutually.

Negative Traits of the April 24 Zodiac

If there is one thing about your personality that you need to change, it is your tendency to reach a point where you eventually don’t care.

You have to approach any kind of situation from a point of empathy.

This is not normally they way you approach things. You just make the scene and due to your force of personality, people fall into place.

This doesn’t always work. As you get older, this becomes more and more difficult because like a typical Taurus, you become more and more stubborn.

Earth is the paired element of all Taurus people.

The particular aspect of earth that is most relevant to the April 24 personality is its nurturing quality.

Whenever you plant a seed into the ground and water it properly, it will grow. You hold it in the place and you cultivate it. This is reflected in your natural tendency to look for win-win situations.

Venus is the ruling planet of Taurus.

Venus is the planet of love. There is a lot of love in a win-win situation.

You have a natural ability of making this important truth clear to the people you’re dealing with.

My Top Tips for Those with an April 24th Birthday

You should focus on empathy. The more you polish your empathic side, the more powerful you become.

The lucky color for those born on April 24 is burgundy.

Burgundy is a beautiful hue of red. It has all the passion of red with added sophistication, subtlety, and universal appeal.

Lucky Numbers for the April 24 Zodiac

This is Why People Born on 24th April are so Lucky

People who celebrate their birthday on 24th April often come off as though they’ve got lucky stars shining down on them, and in many respects that’s very true.

This is the case in part thanks to the influences of both Aries and Taurus in this star sign.

Aries is a bombastic and ambitious sort, while Taurus is a romantic yet pragmatic sort of person who never let’s drama in life slow them down.

Both star signs are disinclined to sweat the small stuff, giving them a carefree persona that helps not get bogged down in worries and anxieties.

This, in turn, leads to good luck, simply because the minds and hearts of these people are so open to letting it in.

It’s a wonderful feeling to know that there’s space within you to let abundance shine forth – treasure it!

Final Thought for the April 24 Zodiac

You have what it takes to become a truly great leader. You just have to get over your tendency to not care.

You have to remember that the world revolves around empathy. The more you care about other people, the more you are rewarded.