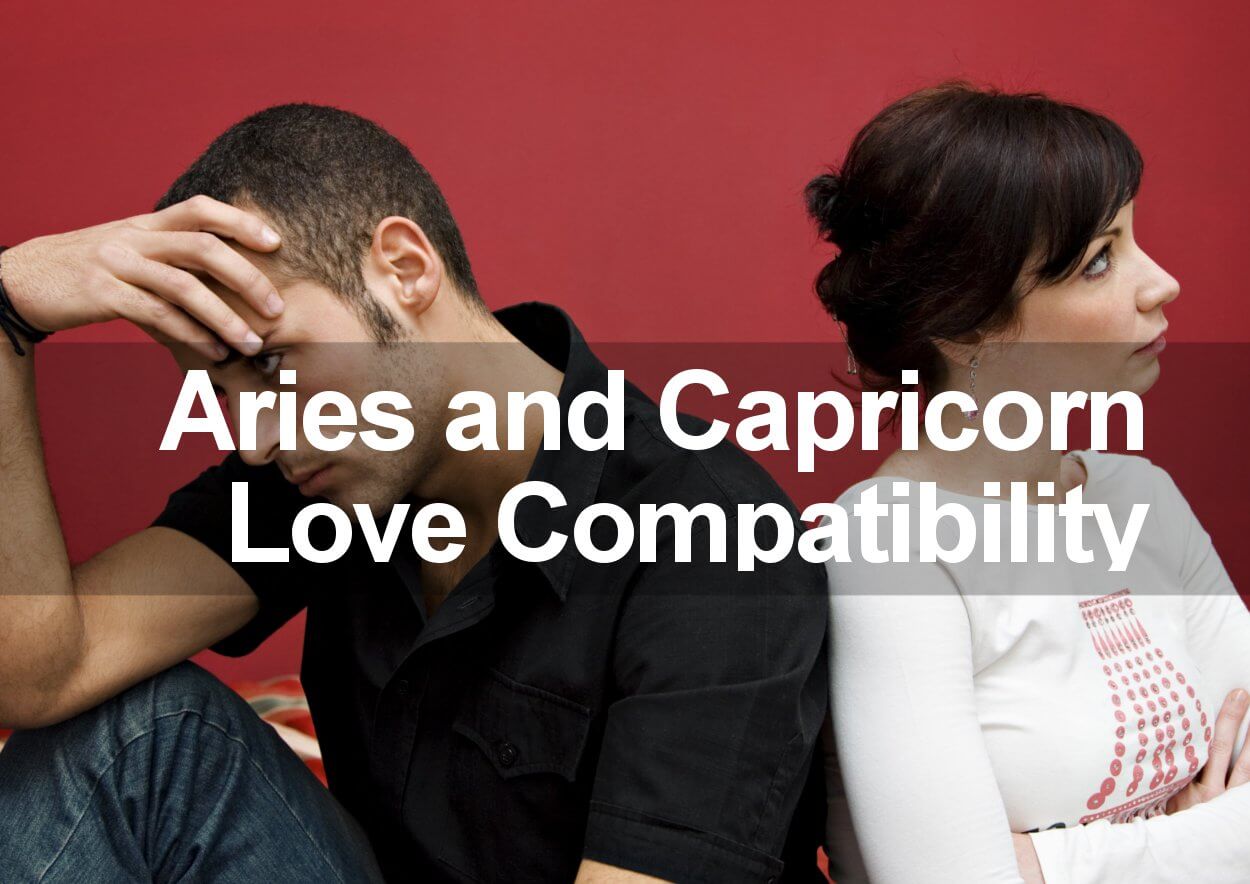 Aries woman and Capricorn man love compatibility is a very interesting mix. When you look at the animals that these two horoscope signs are based on, they look fairly similar. The Aries woman is an Aries which is a male sheep, the Capricorn man sign is a goat with a tail of a fish. You would think that there’s a lot of compatibility here.

You would think that the Aries woman and Capricorn man love compatibility is a slam dunk. Actually, it isn’t.

You have to understand that the Capricorn is actually a very interesting mix. There are types of Capricorns because the Capricorn is made out of actually two kinds of animals. On the top part is the goat and the lower part is a fish. These are black and white opposites. One is a land sign and the other is a water sign.

This is why the Capricorn man personality is very interesting. There are Capricorn men that exhibit the full goat personality. They’re very materialistic, they are driven by careers, and they are driven by money. They like shows of authority, dominance, and social status. They’re go-getters. They are people who get respect and gain respect and they also tend to be quite successful.

However, there are also Capricorn men who are of the fish variety. The fish side of their personality has taken over. They’re very sensitive, they love their families. They’re willing to invest in the emotional bedrock of relationships but they are also extremely sensitive.

Many of them are very artistic, creative but easily discouraged. It’s not uncommon for a Capricorn man of this variety to be called lazy and unambitious. However, they make for great and supportive partners at an emotional level.

However, if the Capricorn man is more of the fish type, there will be more problems because the Aries woman would feel that she’s the one putting the bread on the table, she’s the one pushing the relationship forward.

She’s the one making plans for the future. Regardless whether you’re dealing with a Capricorn man who’s more of a goat or more of a fish, some common issues are still in play when it comes to Aries woman and Capricorn man love compatibility. Here are the four most common issues that are bound to come up at one time or another:

You have to understand that the Aries is a small male goat that tries to basically prove itself in all types of situations. This is why Aries can get into a lot of trouble if you push them hard enough. They tend to make impulsive decisions.

It’s not uncommon for an Aries woman to be deep in debt because she didn’t think through all her purchases or her financial decisions. If she’s dealing with a Capricorn man of the goat variety, this can be a serious problem. Capricorn men tend to be more materialistic and financially driven. And when they see their Aries female partner spending money very recklessly, this can be cause for friction. This is a strong central theme in Aries woman and Capricorn man love compatibility – the conflict between emotional coldness and brashness.

Aries women want warmth. Capricorn men on the other hand want stability. Considering that the Aries can be quite brash and impulsive, Capricorn men might feel that there’s not much stability there because their Aries female partner tends to go off on tangent.

From the Aries perspective on the other hand, the Capricorn man might seem to be too focused on his career or his business or making it in the world that there’s not enough emotional warmth.

It might feel that the relationship, far from being a warm source of mutual strength so that both can grow emotionally together, can become more like a business arrangement that operates in very simplistic ways. I give you something, you give something back.

Material Support Is Not Emotional Support

The fish Capricorn men make a big deal out of the fact that they work hard to support their families. The problem with this is it is what you are supposed to do. That’s what’s expected. You shouldn’t ask for praises for doing something that you’re already expected to do.

Be that as it may, Capricorn men tend to get stuck in a rut emotionally speaking because they can’t seem to get the idea that material support is not emotional support. They’re totally completely two different things. The secret to making Aries woman and Capricorn man love compatibility truly bloom and truly work is to get past this question.

In many cases, a lot of the problem lies in the Capricorn man in the relationship. They often think that money is a form of emotional support. They make a big production of the fact that they may not say “I love you” but their pocketbooks do their talking for them. Well, the Aries woman and really every other woman of the horoscope sign has something to say to that, which is, material support is not emotional support.

Understanding Each Others Love Language Fully

For example, if the Aries woman understands that the Capricorn man views material support as a form of emotional support, then she should say supporting words that acknowledge this thinking of the Capricorn man while at the same time reminding him that these two forms of support are not one and the same.

Aries woman and Capricorn man love compatibility might seem like a slam dunk and might seem very natural at first. However, there are a lot of issues to be resolved. Make no mistake about it.

These two signs may look quite similar in terms of the animals that they are based on but they actually have a lot of differences that need to be worked out for Aries woman and Capricorn man love compatibility to truly work.