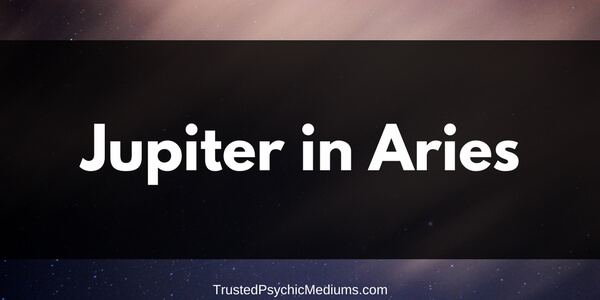 Jupiter in Aries will bring you good luck and wealth. Your Fiery and Masculine nature is met with the eternal optimism of Jupiter.

The ancients referred to this planet as a ‘lucky star’, and Jupiter in Aries allows you to collect your winnings, graciously.

The First sign of the Zodiac, you are a natural-born leader, and find fulfillment in such roles. However, you somewhat childlike temper and tendency to disrupt the peace hinder you at times.

You are happiest when you strike a balance between leadership and citizenship. You are empathetic to those whose fate you are holding, and even more so when hopeful Jupiter enters Aries.

This combination does not occur nearly as often as some others in the Zodiac charts, but nevertheless, the impact of Jupiter is profound on the wealth and luck of the person who is being visited.

When Jupiter is in Aries, decisions to initiate change will be rewarded, financially.

Women with Jupiter in Aries do not want to argue, but if they must, they will shut you right down in a mere matter of moments.

Women with Jupiter in Aquarius can celebrate—be joyful and unafraid in the face of lovemaking revolution and liberations.

Jupiter allows you to see the light at the end of the tunnel—Jupiter is essential to understanding you magnetism toward wealth, prosperity, and security—as demonstrated by Jupiter assisting the Fiery and tempestuous Aries.

Jupiter is non-judgmental. You are not critical in nature, but see the potential in each person. You are an opportunist—and you rarely pass up the chance to make a good friend or a quick buck.

You can be reckless with your generosity—with your people and money. Jupiter in Aries Women tempers the inner child and gives patience when you feel like panicking.

Men with Jupiter in Aries approach problems with the mind of a well-trained soldier.

They can concentrate under enormous amounts of pressure, block out distractions and accomplish their mission, with minimal fuss.

A Man with Jupiter in Aries will get the job done in bed, and know how to take orders from his partner—he aims to please, and Jupiter will definitely be a lucky star in Aries.

This man is extremely opportunistic in business—perhaps working as a stockbroker, venture capitalist, or as in another high-tech and high-income field.

He finds fulfillment by succeeding at work and in achieving personal goals.

He will often be into a high-intensity or adrenaline junkie sport—so pack your Dramamine, because Jupiter will bless you with the most amazing and wild ride through life, next to an Aries Man—especially when he is under the influence of Jupiter.

Jupiter and Aries in Love

Jupiter and Aries in Love compliment each other well and play up each other’s most positive attributes.

Jupiter will bring you luck in love and lots of money—or at least financial security. In some cases, philanthropic Jupiter will encourage you to give to charity and use your gain for the greater good. Make sure that you listen to this gut feeling, Aries—especially when Jupiter is in your Sign.

Your best prospects for love are with a partner who can fully appreciate your ambition when you feel compelled to act.

You are first to volunteer for some of the hardest jobs but can feel hurt when no one applauds your bravery.

Feeling ignored or unnoticed is unbearable, but luckily, you will be blessed by Jupiter in Aries so much so that it forces you into a more positive mindset.

Your worst prospects for love are with a partner such as fellow Fire Signs, Leo and Sagittarius. You will not enjoy competing with these two for the attention of others.

Nor will you really enjoy the mindset of a Cancer, because they almost seem a bit lazy and lost to you.

Show appreciation for all Signs, and cherish the few times surrounding your lifetime that Jupiter enters your Sign.

Dates for Jupiter in Aries

Be aware of timetables for different planets and their transits. You may miss an integral year if you are not paying close enough attention, such as in the case of Jupiter in Aries.

You have almost 5 years to prepare for Jupiter’s next visit to Aries. So, do your homework. Do your research. When opportunity knocks, be ready.

Also, prepare emotionally, not just physically and mentally. In this case that you will a lot of money, do not be fooled by new friends who might be interested more in mooching and getting to know you.

Your temper, even at the thought of being used, is calmed by the soothing power of Jupiter in Aries.

6 Little-Known Facts About Jupiter in Aries

Jupiter in Aries is going to throw up a number of interesting facts for those that are perhaps not that well versed on what it could add to your life, or what it may very well indicate in your personality.

While it often relates to the more masculine and fiery nature in you, there are other things that it may point towards if you are willing to embrace the potential changes.

Jupiter in Aries does often mean that you are really born to lead, and you have the absolute confidence to go ahead and do so.

Not only that, but you enjoy being in that position and have the ability to really take control even though you are against the idea of being too authoritarian as well.

2. It will bring you good luck in life.

This combination is also viewed as representing you being able to have substantial good luck in your life which then, as a result, leads to greater wealth.

You have a tendency to be willing to make decisions, and this will often lead to you being rewarded in a financial sense as well.

Jupiter in Aries for a woman does often mean that you hate to argue and will only do so when you have been pushed beyond your limit.

However, when you are forced into engaging in this way, you have the ability to say your bit and bring it all to an end in a short period of time while also limiting the potential damage that can come with any argument.

4. You are not a critical type of person.

You are going to find that you are not typically a critical kind of person and you have the ability to see the good in everybody, no matter how small or difficult that may be.

You are open-minded to being able to interact with anybody without encountering the kind of fear that others may have.

5. You are able to concentrate even when there is pressure.

A man with Jupiter in Aries has the undoubted ability to be able to withstand the pressure and to remain focused and able to concentrate at all times. This is not the easiest of things to do, so it allows you to excel at things like never before.

6. You seek opportunities and take them.

Often, someone with this combination is going to work in a field where they can actively seek out opportunities and then take them.

This is due to being confident in your own ability and know that you are capable of making the correct decision right from the very outset.

As you can see, Jupiter in Aries certainly has more than its fair share of powerful attributes that you may very well enjoy having in your life.

However, there does have to be some sense of self-regulation or things could spin out of control, so do not take it for granted that everything is going to be positive as that may not always be the case.

Although you may have some maturing left to do, lessons still to learn, and no idea how more wise friends and family members know so damn much.

One day, you will be one of the community leaders, so it is important to always show respect to those in spiritual and/or ancestral seniority.

Show gratitude to those who came before you, paving the way for your education concerning planets.

Your most unique strength is that will you run, fearlessly and head-first, into a battle for the right cause.

Your moral compass may not be the strongest, but you are not a truly malicious person. While you sometimes cause others pain, you will try to apologize after reflection.

However, as the First of the Zodiac, the mantel is on you to continue progress on to the next phase—and you will be pleasantly surprised by your Ally in Jupiter—also it is called “The Lucky Star”.