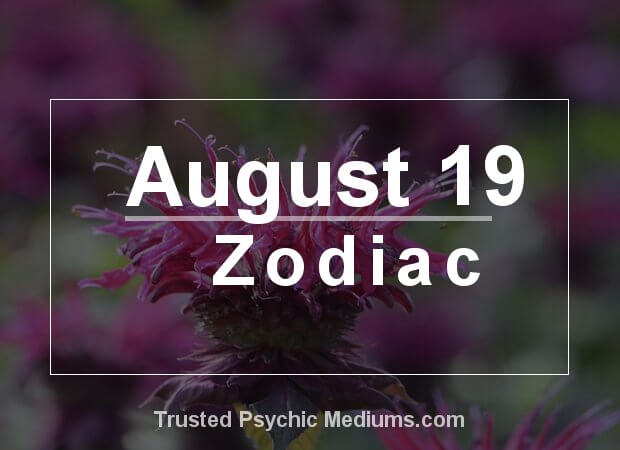 What is your Zodiac Sign if you were born on August 19?

If you are born on the 19th of August, your zodiac sign is Leo.

As a Leo person born on this day, you are a very resilient person. It seems like regardless of how many defeats life can send your way, you manage to bounce back up.

You are an extremely resilient person. In fact, you define your personality based on your resiliency.

You look at any crown of people and you say, “I’m the type of person that can take a knocking and keep on pushing forward.”

This is all well and good, but the problem is resiliency, in of itself, is not really going to help you all that much.

Unfortunately, August 19 Leo people tend to be heavy on resiliency and light on goals. What’s wrong with this picture?

I don’t want to beat around the bush, so let me just lay it out: you run the risk of becoming an emotional doormat.

While there is always a space for forgiveness, this is a two-way street.

You have no business forgiving people that are going to just continuously hurt you over and over again because they think you’re a pushover. See how this works?

Don’t allow yourself to be an emotional doormat; otherwise, your relationships are going to eat you up.

The amount of personal drama involved in you relationships will quieten all other areas of your life.

You have a lot to offer this world, and the last thing that you would want is to become so fixated on how your relationships can bounce back that you end up tolerating toxic people for far too long.

Those with a birthday on August 19 are best suited for jobs involving pressure.

Whatever field you’re in, if it involves pressure, you would do quite well in it.

You have mastered all sorts of logical and rational coping mechanisms to bounce back from failures, disappointments, and threats.

You have an inborn sense of balance.

Now, don’t get too excited. Usually, when people read that sentence, they believe that people with a sense of balance have achieved balance. Not necessarily.

August 19 Leo people prize balance. Unfortunately, they prize it so much that they have converted it into some sort of fetish.

You only need to look at their distorted view of resiliency to see this in effect.

Positive Traits of the August 19 Zodiac

Leo people born on August 19 have a tremendous ability to take all sorts of defeat and bounce back. This is very commendable. It is extremely admirable.

Most people get crushed. Most people, when they get knocked down by life’s slings and arrows, they stay down. They let their dreams and hopes go up in flames.

Not Leo people born on August 19. This is your ace in the hole. Unfortunately, you tend to use it in all the wrong ways.

Negative Traits of the August 19 Zodiac

You tend to hang on to situations that you have no business hanging on to.

You often assume that since you’ve been through worse times, it’s perfectly okay to stick with a really crappy situation because you’ll work your way through it.

Instead of just trying to weather the messed up situation you’re in, try to find yourself in a better situation. That should be your goal.

Use your resiliency to benefit you instead of just using it as a coping mechanism.

The particular aspect of fire that is most relevant to the August 19 Leo personality is fire’s tendency to strengthen certain chemicals due to heat.

With the right heat, certain chemicals turn from liquid into rock-solid form. You can do this as well.

The particular aspect of the sun that is most relevant to the Leo personality is the sun’s ability to give life.

Make no mistake about it. All of us on planet Earth are simply parasites of the sun. Without the sun as the primary source of energy in our solar system, no life is possible. It’s just not going to happen.

This is the sun’s quality that is most relevant to your personality.

My Top Tips for Those with an August 19th Birthday

You should avoid turning your resiliency into a fetish.

In many cases, you become so patient and you put up with so many garbage situations that you really don’t give yourself the kind of respect and credit you deserve.

Why not avoid getting a beating instead?

The lucky color for those born on the 19th of August is represented by the color dark blue.

Dark blue is a very powerful color because blue is the color of power. When something is dark, it means it’s concentrated.

You have the workings of real greatness in you. This is due to the fact that you can take a beating and keep pushing forward.

Now, if you could only pick the right goals, you would be quite successful indeed.

Although Cancer and Leo are next to one another on the zodiac wheel, they aren’t such good bedfellows in the long term, except in the most extraordinary of circumstances.

As a relationship settles down, those two exhibit very different outlooks on love and loyalty.

Cancer people will object sullenly to the natural charm Leo folks, such as those born on 19th August, show off to other people.

It veers close to flirting too often, and often crosses the line somewhat too, and Cancer will waste no time voicing discontent.

To Leo this is a huge breach of personal freedom though, and they view their own actions as perfectly innocent – while paradoxically shutting down anyone trying to flirt with their Cancer beau also.

Suspicion and jealousy and possessiveness will play far too big a role in this relationshop for it to go the distance.

Final Thought for the August 19 Zodiac

You are a very idealistic, positive, and energetic person. You have a lot going for you.

Do yourself a favor and make sure that you aim high. Don’t just settle for being able to take a beating and keep pushing forward.

Make sure that you have the right goals so you can have your resiliency work for you, instead of simply just enabling you to coast from day to day.