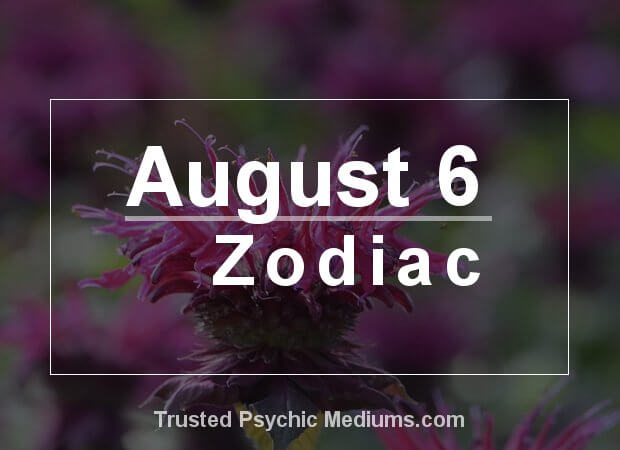 What is your Zodiac Sign if you were born on August 6?

If you are born on the 6th of August, your Zodiac sign is Leo.

As a Leo person born on this day, you are a very trustworthy person. The reason why you are so trustworthy is because you are very loyal.

As long as you are sure that the person that you’re dealing with deserves your trust, they can count on you to be loyal until the end.

You will do whatever it takes, for however long it takes, to support and encourage those people in your life.

With that said, this can lead to very imbalanced relationships.

Beware of where you end up due to this imbalance.

Lovers born on the 6th of August are very loving and loyal to a fault.

In fact, you are so trustworthy that you may find yourself in the unenviable and heartbreaking situation of actually encouraging your partner to ultimately cheat on you.

I know this sounds crazy, I know it’s definitely unusual, but given the seeming blind loyalty that August 6 Leo people tend to develop over time, this is not all that improbable.

In fact, at some level or another, it’s probably already happening.

Do yourself a favor and make sure that the people in your life that you develop a deep loyalty to are deserving of that loyalty. At the very least, demand of others the kind of loyalty that you give them.

Those with a birthday on August 6 are best suited for careers in bureaucracy.

Bureaucracy is a necessary fact of life. Bureaucracy, of course, involves coordination, paperwork, regulation and standardization.

These kinds of environments work best with your personality because loyalty is required in such environments.

Loyalty means you are going to keep the machine going. It means that there is some level of consistency and stability in the life of the organization.

This is the kind of setting you are best equipped to contribute the most to.

You have an inborn sense of loyalty. You believe that loyalty is the highest human value and, for the most part, you are correct.

For the most part, when people trust each other and would be able to sacrifice for each other, things tend to go well. The problem is figuring out the natural limits to this trait.

There is such a thing as too much loyalty.

Positive Traits of the August 6 Zodiac

You are so loyal and trustworthy that you are easily the most predictable person in any organization lucky enough to have you.

People can see where you’re coming from. What they see is what they get.

Given this predictability and stability, people can’t help but trust you.

Negative Traits of the August 6 Zodiac

It’s not uncommon for Leos born on August 6 to be the last person on the Titanic.

What I mean by that imagery is that you are so loyal to the cause that you are able to sacrifice all the way until the end.

This is really quite tragic because while everybody else has gotten off the boat or made alternative plans, or have taken advantage of contingencies, you hang on to your principles.

You go down with the ship, and, in many cases, the ship did not deserve that kind of loyalty and sacrifice. Consider yourself warned.

The particular aspect of fire that is most relevant in your personality is fire’s tendency to consume.

With fire, really, you only have two choices: you either put it out, or it puts you out. There’s really little in the middle.

This duality applies to your personality as far as loyalty is concerned. Either it works for you tremendously or it ends up burning you up.

The worst part is that there’s little reward when it acts negatively in your life.

The Sun is the ruling planet of the Leo.

The particular aspect of the sun that is most readily powerful in the personality of the August 6 Leo is its gravity.

The Earth revolves around the sun because of the sun’s specific gravity. Now, if the Earth were to be pushed closer to the sun at the right velocity, the sun would probably end up swallowing the Earth.

This should be a cautionary tale to the power of loyalty in your life.

While loyalty definitely has its place in value, too much of a good thing can be quite a toxic thing indeed.

My Top Tips for Those with an August 6th Birthday

You should avoid being overly loyal. Seriously.

Even if the person is a really great person or is a really noble person, you have to reserve some loyalty to yourself.

You can’t be so loyal that you end up sacrificing more than the people you are loyal to. They have to carry their own weight, otherwise you will constantly find yourself in such imbalanced situations.

The lucky color for those born on the 6th of August is represented by the color Cyan.

Cyan is really easy on the eyes. It’s a very beautiful color, but with enough intensity, it can be quite overwhelming.

This is reflective of the power of loyalty in your life.

This is the Most Common Mistake 6th August Zodiac People Make

Although good fortune tends to follow people born as a Leo around, including those born on 6th August, it’s important to keep a few things in mind to make the most of how luck smiles down upon you.

In short, you’re a little quick to give up on things in life when they don’t seem to be going your way.

It’s not your fault – you’re a sensitive soul, and when the going gets tough, the tough get going. Nonetheless, learn a little resilience, and you can go far.

When relationships hit a slump or jobs get boring, it’s easy to plan the next move or find an escape, feeling under-appreciated.

If you were born on 6th August, it’s important to have enough self-confidence to not think it’s best to throw in the towel as soon as things get unpleasant.

Final Thought for the August 6 Zodiac

Make sure you look at your values and reassess them from time to time.

In many cases, you’d be surprised as to the kinds of values that you hang on to. It may turn out that you have actually outgrown certain ideas.

By doing some meaningful self introspection from time to time, you might end up avoiding headaches and problems down the road.