7 Ways to Seduce a Capricorn Man 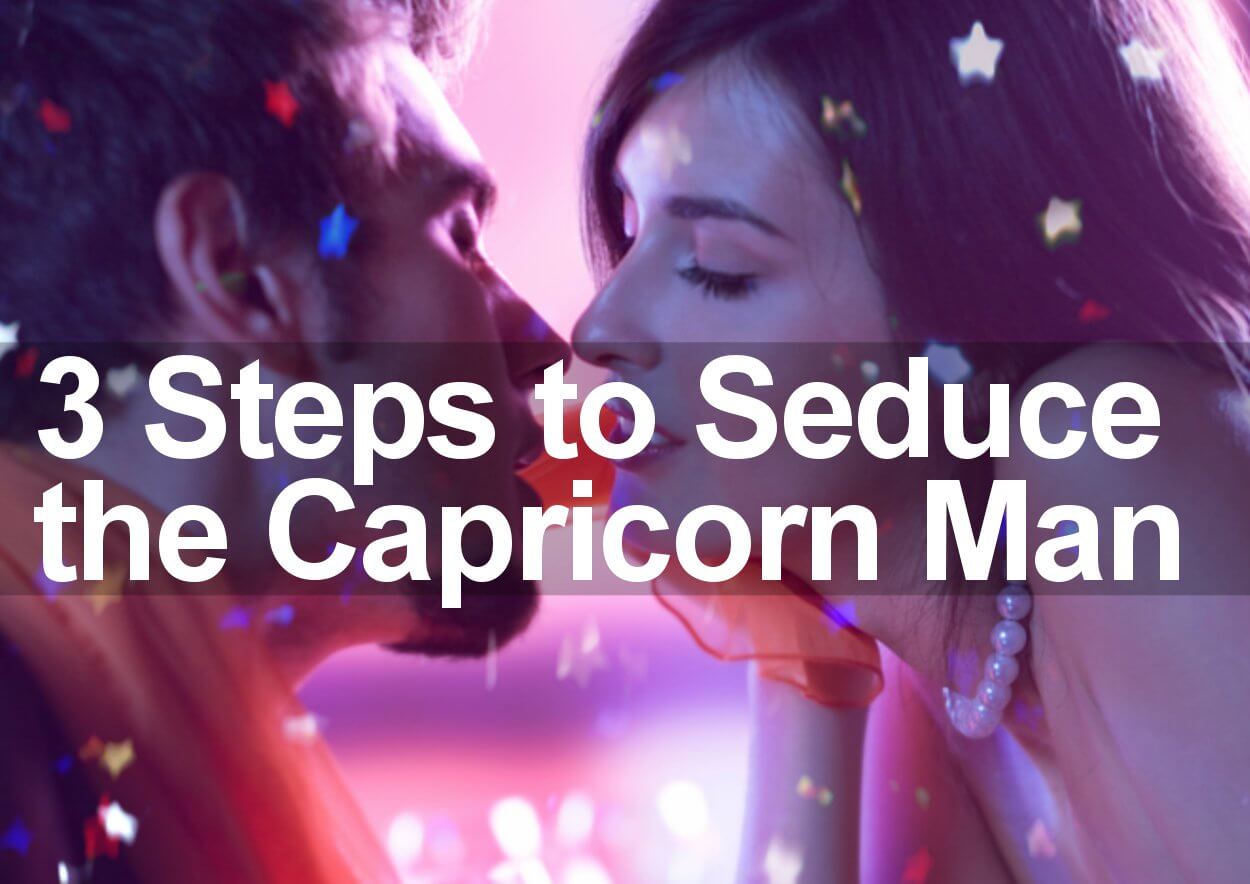 Intelligent yet with a wicked sense of humour, and quietly dressed in black yet bristling with silent ambition, the Capricorn man is a tremendous catch.

But thanks to his self-control, his emotional reserve, and his career-minded ways, he can also prove unreadable from time to time.

It can be tricky for even the savviest player in the game of love to get under his mask. Not to worry though – here are 7 ways to seduce a Capricorn man to make him fall in love with you.

1. How to make a Capricorn man chase you – stay mysterious!

They say to never fight fire with fire, but when it comes to seducing a Capricorn man, this is a good tactic.

In fact, thinking in tactics is pretty much how your Capricorn man approaches life, and in this instance, it’s often wise to live by his rules a little.

In other words, if you’re finding the Capricorn man difficult to read, you can do the same to him.

That doesn’t mean being wilfully unkind to him or withholding information, but it does mean engaging his mind with a little dash of mystery. Seducing a Capricorn man is all about enticing his wonderful intellect.

When you’re talking with your Capricorn man, keep the spotlight on him, and play your cards close to your chest.

Before he knows it, he’ll be revealing more of himself than he’s used to – and that builds intimacy fast, while getting him intrigued by you.

Let his curiosity wash over you, and you’ll find that he’s more than happy to probe every corner of your being for the answer he seeks. It’s one of the best ways of catching a Capricorn man’s eye.

As just touched on, the Capricorn male is a creature of the mind. He’s a thinker and sometimes a philosopher, and he puzzles out life’s riddles in a way that looks effortless.

As you can likely imagine, winning the heart of a Capricorn man is just as much a question of winning his mind. He’s so clever that that can seem intimidating, but he’s not here to judge you.

Instead, think of it as simply catching his interest with smart discussions on things like cinema, art, science, politics and comedy.

The subject matter doesn’t mean as much as your capability in debating and questioning it with him – he’ll love these kinds of lively back and forths.

Showing your intelligence, be it your graduation results, your quick wits or even mastering puzzles and games in the back of newspapers, all shows the Capricorn man that you’re a catch well worth his attention.

When you get to texting, you’ll likely discover that your conversations often bloom into big discussions of the issues of the day.

Long, meandering messages about life’s big mysteries and the intellectual struggles of artists and mathematicians could well take precedence.

If he’s trusting this kind of discussion to you, it’s a superb signal that you’re winning the heart of a Capricorn man.

3. Signs a Capricorn man is falling in love with your sensuality

It would be wrong to assume that the ways to a Capricorn man’s heart rest solely in the realms of the mind.

Truth be told, he’s a passionate lover who has more than a few tricks up his sleeve for the right partner.

Capricorns of every gender love physical intimacy and the idea of sensually getting close to someone.

With that in mind, you’ll find that beneath his cool exterior is some white-hot passion, and when he flirts, it’s almost like he’s unleashing another side of himself.

In some ways, it’s a test. Your Capricorn man wants to know that he’s getting involved with someone who can handle every side of his persona.

His intimate side is one of his most closely guarded secrets, and not for just anyone to see.

That makes it wonderfully flattering when he turns that side of himself to you. It can be surprisingly direct in some cases, and pretty on the nose, but if you give as good as you can get, your Capricorn man will be oh so ready to reciprocate.

And of course, if you prefer taking the lead in these matters, feel free. If you keep the first tip about staying mysterious in mind at the same time as you flirt, you’re mixing up a cocktail no Capricorn man could resist.

Understanding the Capricorn man means keeping this kind of duality in mind at all times. For all his calm, cool, confident exterior, he’s also a powder keg of emotions and sensuality waiting for the chance to be ignited.

Remember to also keep this kind of interaction discreet – the Capricorn man is not massive on public displays of affection.

In traditional astrology, Capricorn is sometimes represented as a mountain goat, dependably putting one hoof in front of the other to get up some of the world’s steepest slopes – ever patient, ever vigilant, never feeling like there’s no hope.

And while we all feel like life is like climbing a never-ending mountain sometimes, Capricorns of either gender understand that deep in their souls. Because of that, they have a gift for patience.

They dream big, and aim for the stars, but they know getting there takes a step by step approach.

When you’re thinking how to seduce a Capricorn man, take his ambitions in mind too. Never, ever make little of his big goals, even if they seem like pie in the sky to you.

Believe us when we say that when he’s set his mind on a vision, he’s halfway there.

Being in a relationship with a Capricorn man means that his goals, and the steps he takes towards him, are always going to be massively important to him.

He likes to be in control of each step of this journey, and there’ll be times when it seems like he gives much of himself to that end.

Don’t feel left out in these moments, however. Learn to connect with him over the tactics he’s laying out to reach for the stars, and he’ll happily take you along for the ride.

In the old fable about the tortoise and the hare racing, the Capricorn man would definitely have sided with the tortoise.

He has a natural inbuilt patience that other star signs can only dream of, and often subconsciously plans his life years in advance.

While you’ve already now learned what that means for his ambitions and career, keep in mind that this also applies to matters of the heart too.

Remember, he finds overwhelming emotions difficult to control, and therefore only wants to wrestle with them on his terms.

If you’re looking for a fly by night relationship or a whirlwind romance, your Capricorn man – through no fault of his own – is not exactly delighted to oblige.

Life in the fast lane can make him uneasy, and in affairs of amore, doubly so.

Take your time. Enjoy getting to know one another – you’re only ever going to be new to one another once.

Besides which, going at the Capricorn man’s pace means you’ve no risk of scaring him off or coming on too strong.

Even better, his keen mind will love thinking up date ideas and potential venues to get intimate in. Let him treat you.

6. Keep a Capricorn man interested in your financial smarts

A Capricorn man, even one down on his luck, never seems to be going out into the world cap in hand.

A sort of natural gift for numbers and money follows these gentlemen, to say nothing of their ability to consistently better their prospects in life, step by step.

Of course, if he’s a traditional gent who likes to pay for you both – and he likely is – your Capricorn man will therefore never be short of swanky places to take you for dates.

Knowing you’re going to be wined and dined is a big part of the appeal for anyone wondering about Capricorn man compatibility.

But of course, in the modern era where all is (hopefully!) equal, the Capricorn man similarly expects his mate to have a handle on her money.

He’s no gold digger, and certainly won’t be after you for your riches, if you’re lucky enough to have them.

Instead, it’s a question of him knowing you’re good for the long haul by knowing you’ve as much of a mind for money as him.

Your Capricorn man won’t expect you to flash the cash the way a Leo man might, but at the same time, he wants to know that his hard-won fortunes aren’t going to be squandered keeping you both safe and happy.

Don’t be shy in talking numbers when you’re dating a Capricorn man. Money is all part of the big game plan for him, and he wants to know you’re both singing from the same hymn sheet – and chequebook.

7. Loving a Capricorn man comes from the heart, not the head

Heartfelt, passionate speeches aren’t the Capricorn man’s style. He shows his love through actions, not words, and it’ll grate with him if you insist on being told over and over how much he wants you.

While we all want to hear that from time to time, definitely let what he does do the talking for you.

The Capricorn man engages with the world with his head far more than his heart, and he has little time for flighty sentimental statements that fly away in the wind as soon as they’re spoken.

Your Capricorn man is far more likely to express his affection through a tasteful gift or a quiet snuggle than he is to sing it from the rooftops – even moreso if he feels pressurised in that regard.

Likewise, being too vocal or emotional in showing your appreciation for your Capricorn man could well turn him away in the long run.

In the dating phase, it’s the same kind of thing – definitely show your interest, even state it, but don’t overdo it.

It’s an easy enough balance to strike once you know his rhythms, and if you’re looking for a low drama, low key no fuss boyfriend, the Capricorn man may well be your perfect match.

All the mind with none of the mind games

The Capricorn man is a straightforward soul, and makes for a fantastic if sometimes emotionally distant lover.

You can win the heart of a Capricorn man by showing you too can be patient, dependable and money minded, without obsessing over career and personal status.

Likewise, he’ll love the opportunity to show off his intimate self, especially once he’s secure in the knowledge that his heart is safe with you.

More than anything, dating a Capricorn man long term I about letting your head rule your heart. It might not sound the most romantic solution, but Capricorn loves the pragmatic approach, and will reward you with lasting loyalty and devotion.

Take it slow, enjoy the ride and let his ambition and drive motivate you in your own pursuits. The Capricorn man plays for keeps, and if you play your cards right, he’ll see you as his greatest win yet.