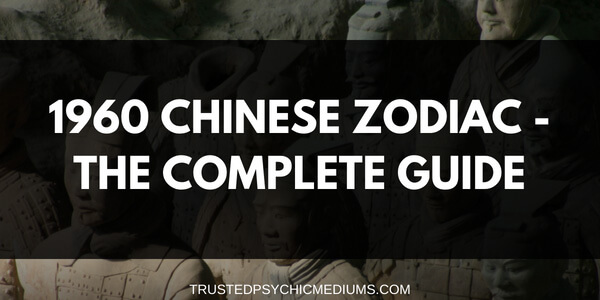 Personality Type of the 1960 Chinese Zodiac

The Rat people are blessed with incredible personal charm that can captivate and bowl any person over.

They are very imaginative and creative, and they can easily make any situation work with their resourcefulness and adaptability.

Because they work hard and spend wisely, Rat people usually have a lot of savings and wise investments.

They know how to treat themselves to things they want or crave, but they also know their spending limitations.

Rat people are elegant by nature, which is their inspiration for striving to have the finer things in life.

They are gregarious, intelligent, and infectious, which is why they always have people around them waiting to impress them or be their friend.

Rat people’s intellectual capability is not always immediately recognized. But they naturally make good bankers, accountants, entrepreneurs, as well as educators and artists.

Metal Rat people are known to be strong and vigorous. Physically, they often have a broad and strong forehead.

They possess a demeanor of a strong and serious political or military leader. They have very strong and powerful minds as well.

Metal Rat people have a balanced yin and yang. They’re not too introverted or extroverted.

They are not too proud or too humble either. Everything is in a nice and temperate manner.

They have a somewhat heroic tendency and will come to the aid of someone who desperately needs help or is in grave danger. They will not hesitate to step in to rescue anyone in trouble.

Metal Rat people follow etiquette and abide by their personal sense of honor.

They are self-willed, motivated, and ambitious. They have such a healthy sense of self-esteem that people who don’t know them deem them very conceited.

Metal Rat people are usually very responsible people. They are highly disciplined and very loyal to people who have also shown loyalty to them.

They don’t have difficulties maintaining a good relationship with the people around them.

But they can be a bit cunning. They can tell lies and pick holes when they are backed into a corner.

But they know how to play their cards well, and they can roll with temporary setbacks like a true champ.

Metal Rat people are purposeful and decisive. They know what they want, and they will not stop until they figure out how to get it.

They are persistent, and they will not let the little challenges overcome them.

They enjoy meeting people and making new friends. They are also quite generous when it comes to helping other people.

They have a vision for their lives and for the people they love. They are very organized and tend to pursue their goals with determination.

Metal Rat people are uncompromising. They may have their hearts broken or suffer rejections and disappointments, but they will not let these things stop them from reaching their goals.

They don’t have any problems striving for self-perfection, but they need to work harder to remain broadminded when it comes to a lot of things.

They can often be stubborn, impatient, inflexible, harsh, critical, and self-centered because of their desire to excel and get the things they want when they want.

The Metal element provides Rat people a strong and focused structure to their energetic dreams and ambitions.

Best Love Matches for the 1960 Zodiac

When it comes to romantic relationships, Rat people may find themselves overcome with powerful emotions such as anger, passion, and jealousy.

However, they are less likely to show these emotions to the people they are romantically involved with.

It’s important for Rat people to avoid giving in to their destructive tendencies and just focus on being levelheaded and ready for compromise.

Rat people are very charming. They love engaging in social activities, allowing them to meet and interact with new people.

However, they are not very good at breaking off relationships with the people they love. This can pose a problem when they need to move on or want to start a new relationship.

Anyone who wants to be in a relationship with Rat people should be ready to keep up with their active nature.

They are very stubborn and strong-willed individuals who will go after what they want with determination, no matter the cost.

They are also very emotional people, and their behavior can sometimes border on the extremes.

They can be jealous at even the smallest things, and their possessive and obstinate tendencies can cause problems between lovers.

The best love match for the Rat is the Dragon.

This pairing will bring about a very loving and fulfilling relationship because the Rat and the Dragon will remain optimistic, determined, and brave enough to work for their future together.

The Rat and the Dragon will find it easy to trust one another because they know they’re both capable and confident.

Dragon people will be very attracted to and appreciative of Rat people’s support, loyalty, and positive attitude.

Dragon people are very kind and generous, while Rat people are resourceful and thrifty, making this couple well-prepared in times of financial uncertainty.

Rat people are very active and energetic, but they will always let the Dragon have a dominant role.

This relationship will be advantageous and for keeps, as long as they compromise and not search for absolute equality from each other.

It’s important that the Dragon should not become too dominating. They both should give each other as much freedom as possible.

Dragons should appreciate it when Rats give them advice to be cautious. Dragon people’s attractive and magnetic personalities will invite all kinds of people and situations, and they may be tempted to make decisions without thinking them through.

Rat people have the ability to sense danger from miles away, and this will be advantageous to Dragon people if they listen to the Rat people they love.

This relationship will remain strong and happy if both the Rat and Dragon will realize that both are looking for one another’s interests.

Another good love match is the Rat and the Monkey.

The Rat and Monkey partnership is a great combination because it’s harmonious and structurally sound.

They will be able to get the wonderful but wandering Monkey to settle down.

These two will always find the most attractive qualities in each other, and their life together will be a happy, satisfying, and financially secure one.

They may find it challenging to focus because of the Monkey’s short attention span and the Rat’s tendency to multitask.

But the Monkey’s optimism will give a healthy balance to the Rat’s pessimistic outlook.

If they support each other through thick and thin, they will be able to achieve new heights and enjoy a very loving and passionate relationship.

In romantic relationships, Rat people are very passionate and hands on.

However, when they feel betrayed or emotionally neglected, they can easily let their hearts dominate them.

They usually feel like their souls are in pain right after a tough breakup. They will wander around in constant agitation.

Fortunately, they usually regain their control and their senses quite quickly.

They may be very individualistic when it comes to their careers, finances, and personal interests, but they can’t stand being alone for too long.

They know too well that a warm and loving home can bring a lot of happiness in their lives.

Wealth and Fortune for the 1960 Chinese Zodiac

Rat people have really good taste and crave to have the finer things in life.

Their homes are tastefully decorated and have a relaxed and inviting atmosphere.

They love to entertain people and have an eclectic mix of friends.

They have strong financial insights and are very wise when it comes to investing their money.

Rat people are natural entrepreneurs and are constantly looking for ways to improve their lifestyles and increase their wealth. They will not let good opportunities pass.

They are very thrifty people, too. This may appear mean because of their instinct to keep their wealth within the family.

They are very generous to their loved ones. They cannot say no to giving luxurious gifts to the people they love, and they like treating themselves every now and then to the same.

There’s a thirst for wealth in Rat people that can make them look greedy and opportunistic. Their desire to climb the social ladder can also be described as insatiable.

They may be wrongly thought of as venal. But for Rat people, money is the only security they will have that will appease all their existential concerns.

If you’re born in the year of the Rat, it’s believed that your lucky numbers are 2 and 3, and your lucky colors are blue, gold, and green.

Lucky flowers are African Violets, Lilies, and Lily of the Valley.

It’s also believed that the southeast and northeast are the luckiest and most favorable directions for people born under this Chinese zodiac sign.

It is advised to stay away from numbers 5 and 9 and anything colored brown or yellow if you don’t want to attract misfortune.

3 Unusual Facts About the 1960 Chinese Zodiac

Rat people with the metal element are a whole character in all the things that they do. They love their freedom and hate being forced or prompted into a situation that they don’t like or have no interest for.

Rat people rarely enjoys solitude. They also don’t like it when they don’t have the moral support of their loved ones, making them prone to suffer depression.

People who were born in the year of the Rat achieve their goals despite all the obstacles in their path.

Thanks to their natural charm, they can easily encourage and inspire people to do their bidding.

You cannot help but be fascinated by Rat people’s overall energy. But you may want to be cautious around them because they put their own interests before anything else.

They are very friendly and enjoy having conversations, but sometimes it just gets too much.

They are happiest when they organize, be it events, their affairs, or their own homes.

Rat people are always coming up with new ideas. This makes them such successful and innovative entrepreneurs.

But behind their friendliness and warmth, their emotions can also run cold. They have very calculating minds.

Their friendly demeanor can sometimes make you blind to the fact that they can also be manipulative and deceitful.

Despite that, Rat people make very good, trustworthy, and loyal friends. They impart valuable advice, and they can drop everything they’re doing to come to the aid of a friend.

Rat people also know that actions speak louder than words, so they show their love for their friends instead of just telling them.

They are very strong and independent people, so it’s quite hard to gain their trust.

As much as possible, they don’t want anything from other people. They work hard to be independent and not rely on anyone else.

They like to take control of their lives. They are very big realists and like to plan their futures.

They don’t look for an easy ride. Just the most reliable and safest one.

Rat people cannot stop saving. They save money and they collect things because they know they’ll be needing them someday.

Their charm and ability to pay attention to the small things make them very talented writers, artists, educators, and businessmen.

Their intellect gives them the ability to know what they need from life, and they use it to their advantage.

Rat people are some of the most intriguing and courageous people you will ever meet, and they will inspire you with their will to succeed.