1987 Chinese Zodiac – The Year of the Rabbit 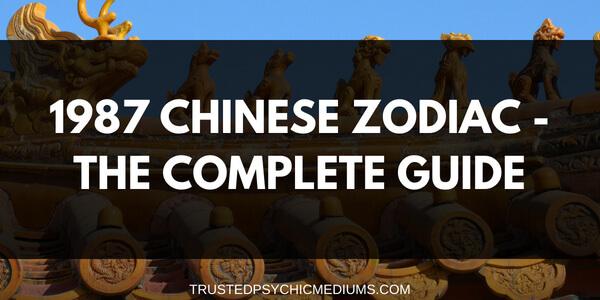 Personality Type of the 1987 Chinese Zodiac

If you were born in 1987, your Chinese zodiac sign is the Rabbit.

People born under this Chinese zodiac sign are some of the most pleasant and easygoing people you will ever meet.

They are tenderhearted and soft, and they do their best to avoid conflicts with other people. They are faithful to those they love and care about, and they easily make friends everywhere they go.

The Rabbit does not like being in the spotlight, though. They are uncomfortable with too much attention being showered on them, and they prefer it if others will take centerstage.

They will be perfectly happy being fans and supporters, or the people manning the backstage or controlling the crowd. They happily let others shine.

Although the Rabbit has many lovable traits, but they also have their share of not so lovable traits. For instance, the Rabbit tends to retreat into themselves and guard their thoughts very closely.

They have this melancholic quality about them, and they can be very secretive even with the closest people to them.

Because they are so used to being loved and admired, Rabbits can also be vain and superficial. The Rabbit usually impresses people with their sensitivity, grace, and tenderness.

They are very romantic in relationships, and they usually have high expectations about the quality of life they will share with their partner.

They want to avoid arguments as much as possible, but they can easily turn an enemy into a friend.

The Rabbit loves spending time in their homes, and they spend most of their time beautifying it and making it warm and inviting.

The Rabbit also works independently and with speed and efficiency. They are very patient people and will not insist on getting their way. They will also not get angry very easily.

It may infuriate you when they start to show hesitation on even the smallest things because time will be wasted and opportunities will be lost.

The Rabbit personality is known for its passive and calm behavior that tries do anything to avoid confrontation.

Even when they’re angry about something, Rabbits will review the situation graciously and calmly.

People sometimes think that they’re not paying attention because they very rarely get annoyed or angry.

But the Rabbit is just naturally quick to understand all the things that are leading up to certain situations in their lives.

The Rabbit has the gift of talking themselves out of bad situations.

If you are the recipient of a Rabbit person’s love, you will have a wonderful partner who’s faithful, romantic, and sweet.

The ideal relationship for the Rabbit is one where a peaceful and intimate atmosphere is created.

Because the Rabbit is so sensitive to the other person’s wavelength, it’s important that they are both willing to resolve hurt feelings or smooth tensions very early to avoid doubts about loyalty.

People born under the year of the Rabbit are very strong-willed, but they don’t often get into trouble or make enemies.

Although they can put themselves first because of their need for comfort, they are still thoughtful, kind, and considerate to others.

Rabbits do have the tendency to be indifferent, removed, and temperamental.

Overall, the Rabbit likes an easy and good time. They are also the kind of people that you will approach for sensible and solid advice, although they also shy away from commitments or responsibilities from time to time.

If you were born in 1987 and your zodiac animal is the Rabbit, your element is fire. The Fire Rabbit makes effective leaders because they are attentive, clever, and patient.

Fire Rabbits are also known to be secretive and mysterious, often doing daring things without the approval of those who love them.

Their dreams to reach the top can also come off as superiority.

Some Fire Rabbits also have a depressive disposition. This leads them to get angry with people, which has negative effects on their romantic relationships.

During their low moods, they can also hurt their loved ones’ feelings intentionally and unintentionally.

They are known for their intuition and keen perception. They have a strength of character that is rarely seen in the Rabbit sign.

They also possess a superb understanding of human nature and usually come off as a very likeable person with a loving way with kids.

Fire Rabbits are natural charmers. They love to socialize, but they also love their alone time away from the eyes of the public.

They easily and discreetly hide their hurts and disappointments. They are also very sensitive and can grow neurotic or moody when they don’t get what they want.

Best Love Matches for the 1987 Zodiac

The Rabbit and the Goat make a great love match. They are both happy and compassionate people and willing to support one another.

They offer each other plenty of passion and tenderness, but they can also both be anxious about certain things.

However, when they know that no relationship is perfect and there will be many highs and lows, they will become better people and better partners to each other.

Because of their closeness, the Rabbit and the Goat may also feed off each other’s moods.

It’s best for these two to work on being happy and satisfied instead of being despondent so that small problems will not escalate.

Both the Rabbit and the Goat are artistic and dreamy, and they enjoy having an emotional release.

Some people say that they are bit high strung. But since they’re very good at encouraging or helping each other, this usually does not pose any problems.

In business, they do best when the Rabbit and the Goat are involved in something creative.

A third party is best recommended to handle the books because neither of these signs are known for their sense of practicality.

When the love match is a Rabbit woman and a Goat man, they will undeniably be a sweet and charming couple.

They may run their lives on a whim. The Goat man loves to flirt, and the Rabbit woman can usually tolerate it up to a certain point.

If the flirting goes too far, the Rabbit woman will naturally get upset or jealous.

When a love match is a Rabbit man and a Goat woman, there may be plenty of minor annoyances but very few major fights. They will get along just fine.

The Rabbit man has a knack for taming the Goat woman’s unpredictability, and they will both feel emotionally secure. The Rabbit and the Monkey also make excellent lovers.

When it comes to romance, everything that made them the best of friends will work to break them apart, and this is something that they should work on if they want to be together.

The Rabbit and the Monkey will be very good at compromising, and this will be very helpful when it comes to solving their relationship issues.

This love match will be very loving and exciting, but the Rabbit will need to open up more to the Monkey.

The Monkey will make it easier for the Rabbit by being supportive, encouraging, and attentive. When both of them make the effort to be better partners, the relationship will definitely be better.

When this love match is a Rabbit woman and a Monkey man, she may find it tough to put up with his flirting. She will need to be more assertive and let him know that she’s drawing the line.

When this love match is a Rabbit man and a Monkey woman, they will enjoy a lot of intellectual conversations. They will remain on a cerebral level for most aspects of their lives together.

Wealth and Fortune for the 1987 Chinese Zodiac

The Rabbit is not very practical when it comes to their finances, so saving money or pursuing a high-income career will not be a priority.

But they possess a very tender heart, making it all too easy for them to get stuck in situations where they’re paying more than they can afford.

Since they usually have a loose, unrealistic relationship with money, they might even be the type to ignore debts or other financial problems.

It may be smart for the Rabbit to work with an accountant or financial advisor. They should not let anyone take financial advantage of their idealistic and compassionate nature.

The numbers 3, 4, and 9 are the lucky numbers, while the east is the lucky direction.

3 Unusual Facts About the 1987 Chinese Zodiac

The year of the Rabbit is in sharp contrast to the explosive year of the Tiger. It is a year of placidity and respite where little will be set in stone. It’s a carefree and happy year that will be both temperate and relaxed.

The Rabbit is a bit more delicate than the other Chinese zodiac signs. They don’t like making waves, and they try to avoid confrontation at all costs.

This does not mean that Rabbits are weak. They simply enjoy surrounding themselves with only positive and inspiring things. They don’t like it when peace is disrupted by problems.

The Rabbit does not like tense or threatening situations at all. They often spend time alone to find peace and tranquility.

The Rabbit likes to weigh all their options before they make a decision. Which means that they will take more time to meditate and think than most other signs will.

They have a deep appreciation for beauty and like to dress nicely and take care of their appearance. Many Rabbits are artists, and they have a unique and creative view of the world around them.

They have a lot of dreams and ambitions, but their anxieties and difficulties making decisions are their biggest obstacles.

They also have a tendency to be pessimistic, which only makes it more difficult for them to finish the tasks they start.

However, they are almost always warm, friendly, and considerate to others despite their current emotions. They want to be more easygoing and laidback, but it’s a challenge for them.

They have great intuition, though, so they usually end up getting what they want. They just need to trust in their instincts more.

The Rabbit is a very sympathetic sign as well. They will make more friends when they open themselves up and take a risk.

The Rabbit is also considered serendipitous. Wherever they go, good fortune seems to follow! Even when there’s the occasional setback, the Rabbit handles it with an uncanny flair.

A smile and a song later, they’re back on their feet!

The Rabbit Sign is ruled by the Moon, giving people born under this sign empathic abilities. This naturally attracts people to Rabbits, hoping to hear a little bit of wit and wisdom.

As the Rabbit hops through life, they bear peace and harmony. But this doesn’t mean their personality is all fluff.

They are merciless when it comes to achieving goals. It’s one of their most surprising traits that people rarely see.

The Rabbit has a very sweet demeanor, but that can change at a moment’s notice, particularly if they feel pressured or hassled.

They are very good and passionate workers who learn quickly. However, if you want to keep a Rabbit happy with their jobs, they should not have one that’s boring and monotonous.

The Rabbit should also avoid those ‘flash in the pan’ schemes. Not only will those have disastrous results, they will also find the Rabbit jumping down the rabbit hole to avoid the embarrassment.