1993 Chinese Zodiac – The Year of the Rooster 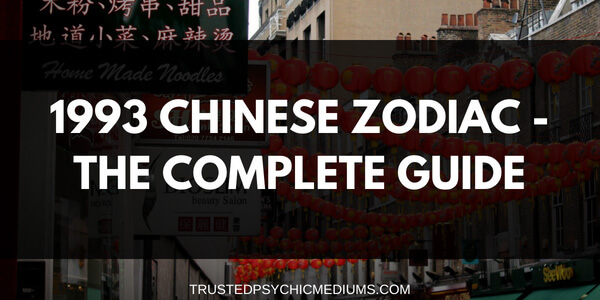 Chinese astrology is every bit as nuanced, ancient and fascinating as its Western counterpart.

A big part of this is how each animal has its own personality, and those born under certain creatures see their birth year shape them in striking and often equally subtle ways.

So it is in the 1993 Chinese Zodiac – the Year of the Rooster. If you’re wondering what to expect from these proud and cocksure people, read on in this overview to find out more.

Personality type of the 1993 Chinese Zodiac

Some say confidence and pride are things folks just get born with, and for pretty much every Chinese astrology 1993 Rooster out there, there’s a sense of self assurance that’s both striking and enviable.

Don’t confuse that self-assurance with being superficial or shallow though. Chinese zodiac rooster folks are extremely good at backing up that style with substance.

It’s some pretty serious style that they have though – these are often very good looking people.

Don’t let the masculine connotations of the Rooster animal fool you either, because that is true of both Rooster men and Rooster women in Chinese astrology.

Put simply, you just never see these folks anything less than brilliantly turned out. Chinese Rooster zodiac sign people have a very good eye for aesthetics as they relate to themselves – it seems to come naturally to them.

From an often surprisingly young age, Rooster folks learn what outfits best bring out their natural looks – and you can expect the same of the haircuts they choose and the homes they create for themselves and their loved ones.

Again though, leave assumptions of Rooster folks being self absorbed at the door. The keen eye of the Rooster in Chinese astrology is very observant indeed.

These are people who are very skilled at breaking down ulterior motives in people, or spotting the details in things that people tend to miss.

That intuition borders on almost psychic insight at times, and foolish are those who believe they can pull even a thread of wool over a savvy Rooster person’s eyes!

Having said that, Rooster people born in 1993 are not coy and mysterious. Just as the crowing cockerel knows how to wake everyone up at the crack of dawn with a piercingly loud call, so too do people born in 1993, the Rooster in Chinese astrology, know how to speak their mind.

Don’t expect them to pull any punches doing so either, as Rooster people say what they mean and mean what they say.

In fact, if we were to give them any advice, it’d be to cool down their outspoken ways from time to time, because Rooster people can bruise a fair few egos without a care when speaking their mind sometimes.

As you might already know, the year when you were born doesn’t just give you one of the animals of the Chinese zodiac.

You also get an element, and in this case, 1993 in Chinese astrology is the year of the Water Rooster.

So, what does being born in the year of the Water Rooster mean? It simply means that there is a little more nuance to the personality of Rooster people in Chinese astrology.

The elements add a little more shape of interpretation to the already strong and smart persona of the Rooster.

For example, it creates an interesting contrast between the outspoken nature of Rooster people and the timidness of the water element – Water Rooster people born in 1993 might often find that their confidence sometimes is offset by moments of shyness they find tricky to recognise in themselves.

For instance, a performer born in 1993 might display all the bravado they need to become a star in a stage show, yet experience remarkable stage fright the instant they try and get on stage.

There’s more to it than all this though – Water Rooster folks born in 1993 are often very altruistic and nurturing. It’s a trait that they have in common with water star signs of the Western zodiac.

Water nourishes the earth and is vital to nurture and sustain life, so it makes sense that this element gives people born in 1993 a generous and kind personality.

Although the Rooster is cocksure and confident, he or she is not inclined towards being competitive for its own sake, or treading on other people to get what he or she wants. People are drawn to them for their kindness and confidence alike.

Best love matches for the 1993 zodiac

People born in 1993, the Water Rooster in Chinese astrology, have a romantic and physically sensual side, and certainly an appreciation for the romantic and emotionally nourishing side of life.

A keen sense of insight into what makes other people tick means that Water Rooster folks are not the kind to be anybody’s fool in love.

However, as with any other of the animals of Chinese astrology, there are good and bad matches for the Rooster.

Keep these in mind as you enter into the big game of love though, and you can’t go far wrong.

For instance, the compatibility of the Rooster and the Snake in Chinese astrology makes for a good love match.

Two intelligent, observant and adaptive souls meet in this match up, with plenty to teach one another about trust and seeing things through too.

There is also a lot to be said about the compatibility of the Rooster and the Ox in Chinese astrology.

The latter is stoic and dependable, never letting the events of life keep them down for long.

Meanwhile, the confidence and intelligence of people born in 1993, the Water Rooster, means that the life of the couple can flow smartly in a direction that makes the most of the talents each partner holds.

It’s also wise to pursue a relationship between a Rooster and a Pig in Chinese astrology. Both are intelligent souls, yet the quick-witted ways of then Water Rooster born in 1993 are offset and balanced by the patience and perseverance of the Pig.

Wealth and fortune for the 1993 Chinese zodiac

People born in 1993 have the advantage of being a Water Rooster, and that means equal parts compassion and confidence to help guide them on their way.

Conventional wisdom in Chinese astrology suggests that people born in 1993, or any year of the Rooster in the Chinese zodiac, tend not to be born into money, but have the smarts necessary to make wealth for themselves.

Water Rooster people are tireless in chasing their dreams too. All Rooster folks have a tendency to dream big, but also are blessed with the energy needed to make things happen to realise them.

It’s a very rare thing indeed to see a person born as a Water Rooster in 1993 tired or content to sit around doing nothing with their time.

The intelligence that these folks are gifted with also means that seeking their own fortune is backed up with a good mind for strategy.

And of course, the fact that people born in 1993 have that insight into the motivations of people, as all Water Rooster people can, means they will rarely fall afoul of someone trying to exploit them for their own gain, or interrupt the Rooster’s career trajectory.

Every symbolic animal in Chinese astrology is so much more than just the creature and its mythology alone.

You can invite a lot of good fortune and synchronicity into your life as a Water Rooster if you keep some of these lucky symbols and lucky numbers in mind.

For example, the lucky numbers for the Rooster in Chinese astrology are 5, 7 and 8.

You’ll find that these numbers tend to occur in the strangest places and patterns throughout life’s more fortunate moments – maybe as part of the figure of an unexpected financial windfall, or a house number of a place to live in which many happy and beautiful memories are destined to be made.

There is a lot of other fun symbolism to explore too. For example, lowers such as cockscomb and the gladiola are very lucky for the Rooster, and both the scents and the colours such flowers possess are sure to prove inspiring and peaceful to Rooster people.

And of course, the lucky colours of the Rooster in Chinese astrology are well worth keeping in mind too.

Before getting into these, also consider what the Chinese zodiac advises the Rooster against – the colours of white and green.

Some people born in 1993 as a Water Rooster, as well as other Rooster people born in other years, report feeling irate at a kind of subconscious level when around those colours heavily.

Rooster people far prefer, and are blessed by, earthy and rich colours like brown and gold.

It’s this time of year that Roosters often experience their best lucky events, even if their actual birthday is in another season.

3 unusual facts about the 1993 Chinese zodiac

Chinese astrology is deep and fascinating, and that means there are some more hidden areas of interest you can learn about what defines the 1993 Water Rooster.

For instance, did you know that the Rooster in Chinese astrology, besides having lucky numbers and colours, also has lucky directions?

West is generally considered fortunate and favourable for the Rooster in Chinese astrology.

Meanwhile, South and East on the compass are considered unlucky – curious, when you consider that the Rooster is an animal who welcomes the sun, which rises in the east.

Secondly, in the Chinese zodiac, the Rooster is the tenth animal sign of them all.

Being tenth means there are only two animals behind the Rooster overall, but you can bet your bottom dollar that people born as the Rooster in Chinese astrology don’t let that anything less than the leaders of the pack in the rest of their lives!

Thirdly, people born as the Water Rooster in 1993 in the Chinese zodiac often have a stubborn side that’s worth watching out for.

Perhaps it’s their sharp intuition, maybe it’s their strong intelligence, or it could even be the pride and confidence of the Rooster bubbling up within them.

Whatever the reason, once a Rooster makes a decision, good luck to you if you want to try and change their mind any time soon!

Chinese astrology is a wonderful way to explain and crystallise so many of the complex personality traits that make up so many people we know.

As for those people born in 1993, the year of the Water Rooster, it’s clear that good fortune and a wealth of confidence is smiling down upon them.

The Rooster in Chinese astrology is brave and self-reliant, and takes pride in his or her own appearance.

These are the kinds of people who are almost impossible to ignore when they walk into the room, but also tempered by the Water energy of their 1993 element that means that, if two Water Roosters meet, they are more inclined to work together than to compete.

They recognise the gains of the greater good.

However, people born as Water Rooster souls in Chinese astrology also can let their emotions overcome them at times, and their confidence can occasionally be sapped by their own self-doubt and shyness.

This is one hurdle to overcome, but so is making sure to balance against going too far the other way, becoming hard-headed and stubborn, or even losing their temper over trivial issues.

All in all though, we are all enriched by those Water Rooster people we let into our lives, and they are gifted and generous folks indeed.

The 1993 Chinese zodiac teaches us that these are faithful friends and passionate lovers, sure to have their way and make their place in the world with style.