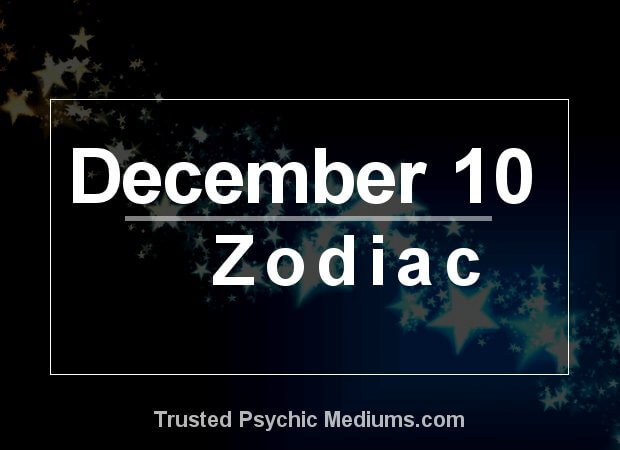 What is your Zodiac Sign if you were born on December 10?

If you are born on December 10th, Sagittarius is your Zodiac sign.

As a Sagittarius born on December 10th, you are great with motivating other people.

You are also very charming when it comes to love.

You are ambitious and direct. When you want something, you work hard to achieve it.

You are a very driven person. You don’t want to beat around the bush. This is due to the fact that you understand a concept that most people are quite unclear about.

Most people would sum up their relationship with time as “there’s more where it came from”.

You don’t believe in any of that.

You know that for every second that you spend, that second is not going to come back. Either you rent somebody else’s time or you maximize the value of the time that you do spend.

You truly value your time. Not surprisingly, a lot of people think you’re impatient. A lot of people believe that you are rough and get to the point in a rude way.

You just have to work on communicating the fact that you value your time, and they should as well.

When it comes to love, people who were born on December 10th are jealous lovers. They want the undivided attention of their lovers.

This is the reason why a person born on this day find it hard to find a long lasting relationship.

To be able to maintain a relationship with this person, you should have the ability to return the same amount of attention he or she is giving you.

Individuals born on this day are easily attracted to signs like Leo because they share the same ideas in life.

When it comes to matters of the heart, it’s very easy to misunderstand you. In fact, in many cases you would come off as saying something very unpleasant and hurtful.

However, when somebody truly knows you, they would understand that a lot of the rough stuff you say is actually intended to heal.

I know this sounds crazy. I know it sounds like a contradiction in terms. But this is the truth.

There are many ways to say something, and unfortunately, the most direct way is usually the roughest way.

Still, once people get to know you, they would see where you’re coming from and what your intentions are.

There is very little middle ground as far as you are concerned.

You are very charming to the people who love you. To other people, you are very easy to misunderstand.

People born on December 10th are great in educating other people.

They are very charismatic and persuasive as well.

A career in education or public relations is suitable for people born on this day.

You can take inspiration from the life stories of poet Emily Dickinson, who has the same birthday as you.

You are great when it comes to efficient communication.

This is why you could take a concept that has a lot of fuzzy parts and rework it in such a way that it’s very easy to understand.

You also rework it so there’s less time involved in understanding that concept.

Not surprisingly, you make a very effective speaker as well as educator.

People don’t have the luxury of time. That’s why you don’t beat around the bush. You’d rather get the message across in a clear, concise way.

It’s as if you speak in the form of haiku. That Japanese for of poetry, of course, is about maximizing meaning while using as compact of a form as possible.

People born on December 10th love being around people. They are most happy when they are traveling.

They are also observed to have a laid back approach in life. When with the right company, they exhibit refinement and elegance.

While you do have a relaxed air to you and people can find you elegant, you can also turn off people. Why?

You can be refined and elegant, but you also can be cutting. It really all depends on who is listening.

This is why it’s really important for you to be very careful regarding people you just met.

Not surprisingly, when people do take the time to know you well enough, they often find themselves becoming very loyal to you.

While a lot of people take you the wrong way and misunderstand you, you also have no shortage of people defending you. These people would go to some lengths just to explain what you meant.

Make sure that you reward these people with a deeper level of friendship.

Positive Traits of the December 10 Zodiac

People born on this day have a very high sense of justice. They cannot stand any form of injustice or treason.

They usually come forward to defend you when they see that you are being taken advantage of.

Negative Traits of the December 10 Zodiac

One of the things that people born on December 10th commonly share is that they are sometimes blunt, which makes it harder to do business with them.

They can also be conceited and impulsive at times. They also have the tendency to have unrealistic expectations of other people.

In your zeal to save time and get to the point, you tend to step on many toes.

You probably already know this. You can come off as rude and harsh.

By focusing more on how people would respond to your message, you can go a long way in becoming more efficient, while at the same time angering less people.

The thing is, you are so focused on communicating in as clear terms as possible that you make unnecessary enemies.

This doesn’t have to be the case. In most cases, these people who got turned off by you or who felt that you rubbed them the wrong way could have been your biggest allies. This is the big tragedy.

It really all boils down to a simple miscommunication.

The good news is you can choose not to put yourself in such a situation.

By paying more attention to your choice of words, as well as how they are likely to be received, you can go a long way in becoming the most powerful, persuasive, and charismatic person in any room you find yourself in.

As a Sagittarius, Fire is your element. Fire symbolizes confidence and high spirits.

People who are influenced by this element can come across forcefully at times. They can also serve as an inspiration to others.

Jupiter is Sagittarius’ ruling body. This connection with Jupiter demonstrates observance and abundance.

Jupiter also represents the influence to focus on power. Jupiter, being also king of the gods, is also expansive and tolerant.

My Top Tips for Those with a December 10th Birthday

You should avoid: Impatience. Also know the value of time.

The lucky color for those born on December 10th is Brown.

Brown represents the need to be loved unconditionally. It also reflects wanting to have a simple and comfortable existence.

People who are influenced by this color are supportive to their family and friends.

If You Were Born on 10th December, Don’t Do This in Relationships

Love and romance in the traditional sense hold little appeal to the Sagittarius spirit, who is far more free of mind, and much more interested in exploring new avenues of thinking.

That’s not to say that these souls aren’t loving though – far from it.

However, a 10th December Sagittarius, in particular, might often be accused of not being romantic or thoughtful throughout their love life over the years – even when this same individual is doing their utmost to show that they care.

Try to remember that your partner wants some time where it’s just they and you – time to keep still and take stock of your affection for one another.

Remember, if you feel trapped, you needn’t be – your perfect partner will always respect your freedom, if you ask for it nicely.

Final Thought for the December 10 Zodiac

If you are a person born on the 10th of December, you have to learn the value of time and human resource as well.

You have the ability to motivate people around you and this is one of the reasons why people want to be with you.

If you become more considerate to others, you will surely attract more success in your chosen endeavors.