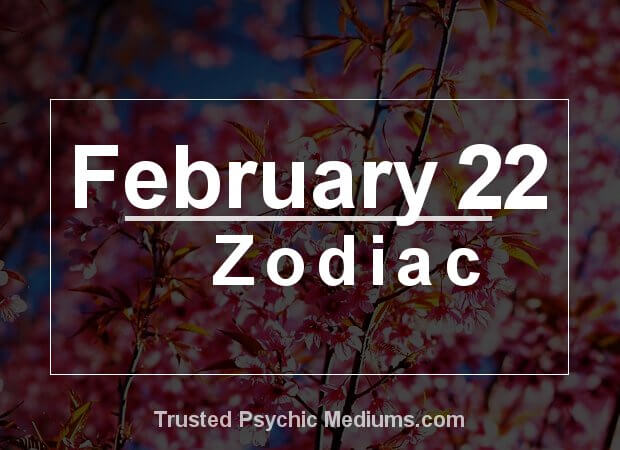 What is your Zodiac Sign if you were born on February 22?

If you are born on February 22nd, your zodiac sign is Pisces.

As a Pisces born on this date, you are often inconsistent, wishy-washy, indecisive, and also flexible.

But you have to understand that there’s really no such thing as a negative trait. What people might think as irritating about you might actually be great in certain contexts.

Deep down, you are very generous, and you’re quite a giving person. It’s not uncommon for you to give your most precious asset which is, of course, your time. You’re also a very attentive person.

With that said, it seems that in many cases you don’t have much of an identity. You tend to adapt to any environment.

This can pay off on certain levels, but on other levels it seems like you’re not really being true to yourself.

A little bit of self-introspection can go a long way as far as your personal hapiness is concerned.

Lovers born on February 22nd are extremely loyal, loving, and affectionate partners. You really go out of your way to be there for your partner.

The biggest gift that you could give somebody, as mentioned above, is your attention. You give them the proper time.

You truly listen. You’re not just a sounding board, you’re not just there to absorb information. You really try to guide them to their feelings.

Not surprisingly, lots of members of the opposite gender find you attractive not because of your looks, your physique, or the amount money you have in the bank.

Their attraction is centered primarily on your personality and how you make people feel around you.

Those with a birthday on February 22 are going to be great in the fields of counseling and any kind of work that involves listening to people.

You have amazing listening skills. This skill comes to you naturally. You don’t have to work hard at it for you to be able to help people.

The reason why this is the case is because you are truly curious about people on an emotional level.

Accordingly, while you may not be a natural leader, you do tend to be the natural cheerleader of any kind of work group or team you find yourself in. This ability to rally people can be quite positive.

You have to understand that a key part of leadership is to get everybody together.

What’s the point of knowing everything about a particular project if you’re unable to get everybody on the same page? Then, your knowledge is pretty much worthless.

Still, you attract a natural following because people feel that they can trust you.

Pisces born people are, to a certain degree, very versatile. They are very adaptable and they can pretty much get along with most people. This is a great trait because this is quite rate.

Positive Traits of the February 22 Zodiac

Pisces people born on February 22 are able to practice a lot of empathy and compassion. You have a soft spot for people who are marginalized, discouraged, or otherwise dismissed as weird.

It’s as if you have some sort of psychic ability to say the right things to the right people at the right time.

Negative Traits of the February 22 Zodiac

If there is any room of improvement as far as your personality goes, it would be your tendency to lose yourself in any kind of context.

You’re such a team player that you forget sometimes that you do have your own personality. That’s right.

This might come as a shock, but you actually have some hard-set areas to your personality.

You would do well to get back in touch with these parts of your personality. They may reveal truths that would enable you to mature as a person.

Water is the paired element of all Pisces. It is the ruler of feelings.

While other Pisces people tend to be very moody and, in many cases, erratic, you tend to be more stable. Why?

This is why you are such an adaptive person. You ground yourself based on how other people are feeling around you.

Of course, this is a double-edged sword. If people are freaking out, then you feel it ten times worse.

On the other hand, if people are feeling good, you tend to have an amplified impression of those emotions.

Be very careful of this aspect of your personality.

Neptune is the ruling planet for people born on the 22nd of February.

This planet is the god of the sea. If you read Greek mythology, one thing that would instantly jump out at you is that Neptune is not exactly the most stable person.

It is no surprise that people born on the 22nd of February tend to ground their feelings based on others because that’s where they get their stability.

This is usually a good strategy, but you have to remember that like most strategies, you should pay attention to limits.

My Top Tips for Those with a February 22nd Birthday

While it’s one thing to be adaptive, it’s another to be completely dependent on other people.

The lucky color for those born on February 22 is represented by lavender.

While you can be the invisible glue that holds people together, you do have your own personality.

When you polish this personality, you’d be surprised as to how attractive you can be in the eyes of many people.

If You Often Dream About Food and Drink, Then You Should Do This

It’s safe to say that people born on 22nd February are people who aren’t too fussed about materialism or getting the big mansion on the hill.

If it happens, sure, that’s fine, but as long as you’re still able to use your wealth to help others, that’s what counts.

Dreams come in all shapes and sizes, but what might often be a theme for someone born on 22nd February is food and drink.

It might be a big banquet, a cooking issue you’re having in he context of the dream’s narrative, or a hunger you can’t satisfy in the dream.

However, it manifests, take on the idea that food is a symbol of plenitude – of having more than enough, beyond merely surviving, when it appears in dreams.

In older times, eating was for subsistence alone, and only the truly wealthy could afford to have lots of it.

If you’re sensing the theme here, it’s of abundance – of making sure your savings are shored up for a rainy day.

Just as harvesting food ahead of a long cold winter was the norm in an agrarian society, so too should you ensure your cupboard isn’t bare if more sparse times are coming.

Final Thought for the February 22 Zodiac

Pisces people born on February 22 must realize that their self worth does not depend on other people.

Now, this is quite shocking to you because you have probably developed certain habits to get along better with others.

While getting along is definitely a good trade, it does have its limits. You should not sacrifice key parts of your personality just because you want to get along with others.

I hope that much is clear.