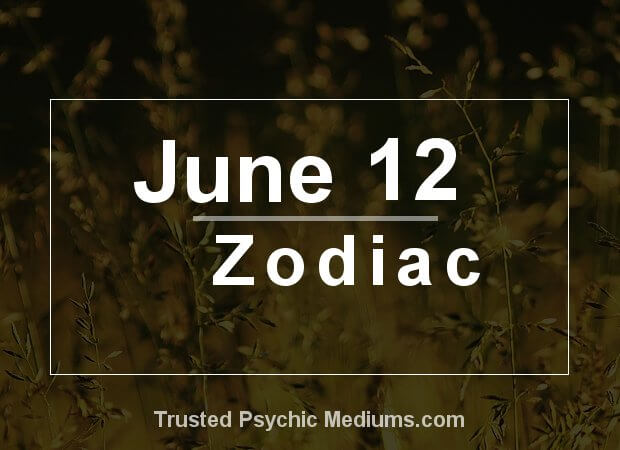 What is your Zodiac Sign if you were born on June 12?

If you are born on June 12th, your Zodiac sign is Gemini.

As a Gemini born on the 12th of June, you are a very interesting person because you believe in juxtaposition. You always look at how people behave based on what people say they believe in.

You get a lot of enjoyment in pointing out people’s hypocrisies. You are quite humorous in ironies.

You believe that people inherently are bad and, regardless of whatever claims to goodness that they make, they eventually will succumb to their true nature.

You take a lot of satisfaction on the fact that you are rarely disappointed.

Lovers born on the 12th of June are some of the most cynical romantic partners in the horoscope.

This may seem like I’m saying a lot, but when you look at how you behave around your romantic partners, as well as the things that you talk about, this is absolutely true.

Your greatest fear is to be hurt. Accordingly, you would rather write love off as a pure and untainted emotional reality rather than risk being hurt.

Accordingly, your cynicism and skepticism, when it comes to matters of the heart, becomes self fulfilling prophecies.

If and when you begin to mature, emotionally speaking, real romantic involvement would be very difficult for you.

Now, this is not saying that you will not make love with romantic partners. You will have a lot of that.

But when it comes to real love, you will have to take your time.

Those with a birthday on June 12 are best suited for careers involving entertainment.

The most natural fit for you would be that of a comedy writer, a stand up comedian, or some sort of humorist.

You have impeccable comic timing. You also have a great way of cutting through the BS and seeing through people’s true nature.

Not surprisingly, people can’t help but laugh at your cutting observations.

You have an inborn sense of irony.

You understand that regardless of the big game humanity talks about, things like integrity, character, love, compassion and goodness, the bottom line is we’re still animals.

The bottom line is we’re still looking out for number one.

You delight in this inborn hypocrisy that all human beings suffer from.

Positive Traits of the June 12 Zodiac

You know how to make people laugh. The interesting thing about the laughter, however, is that it’s rooted in factual observations.

Your comedy and humor focuses more on the big disconnect between what people imagine themselves to be and who they really are. This is your stock and trade.

Even if you don’t get into the entertainment field, people would still flock to you because you have a natural knack for this type of wit.

Negative Traits of the June 12 Zodiac

While cynicism can and does prevent you from being hurt, eventually, it can corrode you. Seriously.

Life is what you make it. If you’d look at it as essentially worthless, meaningless and sour, that’s what it will be.

Unfortunately, we only live once. It really is sad if you let your cynicism and skepticism get the better of you and you live out your days assuming that life is essentially worthless.

You are worth more than that.

Air is the paired element of all Gemini people. The particular aspect of Air that is most relevant to June 12 Gemini’s personality is Air’s corrosive qualities.

If you were to leave out certain materials and elements and expose them to air, they will either corrode or fall apart.

While we human beings tend to view oxygen as a good thing, oxygen is actually quite a corrosive gas.

This corrosive nature is on full display in the wit and humor of the June 12 Gemini.

The particular aspect of Mercury that is most readily apparent in the June 11 Gemini’s personality is Mercury’s fast moving nature. It flips and flops every single time.

Why? Because it moves so fast around the sun.

This aspect of seeing the far and near part of Mercury revolving very quickly highlights your personality.

You are all about the disconnect between our inner and outer realities, and Mercury displays that at a blinding speed.

My Top Tips for Those with a June 12th Birthday

You should avoid being too cynical and skeptical.

Understand that there is such a thing as real goodness.

Understand that there are people who truly believe in their ideals and who are consistent.

I know this is very hard to believe, I know that you would rather think that everybody is essentially worthless, evil and purposeless, but there are good people out there.

You can even be one of those people if you just let go of your addiction to cynicism.

The lucky color for those born on the 12th of June is Honeydew.

Honeydew is a very nice color. It definitely comes from a very sweet fruit.

This might seem ironic considering the fact that you have a very cutting and often toxic sense of humor, but Honeydew actually reflects a very interesting aspect of your personality.

If you were to cut away the cynical side of your persona, you can actually be quite a sweet and loving person.

While more contemporary celebrities are always the ones taking the headlines today, the person born as a Gemini on 12th June is someone who prefers seeking some profoundness and depth in things.

How apt, then, that you share your date of birth with Anne Frank.

An author, therefore as gifted with words and conveying ideas as you are, Anne Frank was an instrumental woman in capturing a horrific period of history and chronicling it in its most grisly of details.

Her own trials and tribulations created her famous diaries, still marvelled at today.

Much like Anne Frank, you’re not afraid to tell it like it is, nor to bow down to any would-be tyrants or villains in your midst.

You have both courage and intelligence, and are willing to put them to use to affect change in those matters dearest to your heart.

Final Thought for the June 12 Zodiac

Life is not as screwed as you think it is. It may seem like it, it may seem that people aren’t really worth trusting, but you’d be surprised about people.

If you were to treat them the way they feel that they deserve to be treated, you’d be surprised as to how good, generous, compassionate and loving people can be.