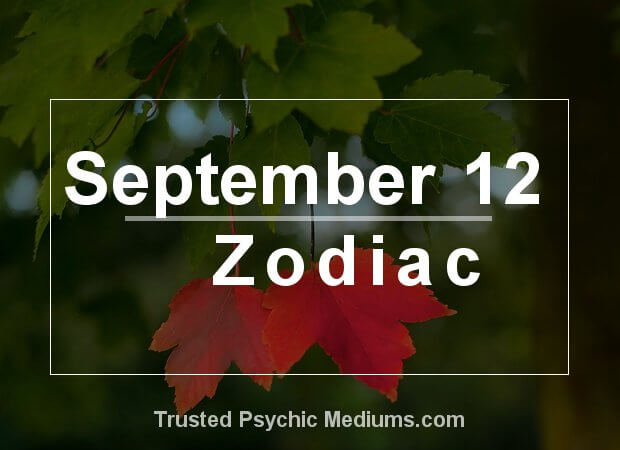 What is your Zodiac Sign if you were born on September 12?

If you are born on September 12th, your zodiac sign is Virgo.

As a Virgo person born on this day, you are a very specific thinker, and that is putting it charitably.

A harsher way to put it would be that you are very narrow-minded. You tend to look at a particular situation based on things as they exist now.

While on the surface, this makes you a very pragmatic person, it also limits your thinking.

You can’t think outside the box. I hate to use a cliched expression, but that pretty much sums it up.

You are a very limited thinker as far as possibilities go. Now, don’t confuse this with lack of intelligence or being stupid.

You’re neither of those. You are actually quite intelligent. The problem is you seem so fixated on how things exist at this particular point in time, that a lot of opportunities pass you by.

Lovers born on the 12th of September are very unappreciative. I know that’s one hell of an opening sentence, but it pretty much sums you up.

Now, don’t get me wrong. You are very charismatic, magnetic, and even irresistible, the first few times your romantic partners meet you.

However, as they get to know you, you expect more and more from them. In fact, in many cases, you become some sort of emotional dictator.

This doesn’t mean that you curse them, or you use bad words. You do something worse. You withhold emotion.

A lot of people may defer whether this rises to the level of emotional abuse, but the damage is somewhat similar.

You become very manipulative. You focus on what you want, and never on what the relationship needs. It is not a surprise that your relationship, tend to fall apart.

The interesting thing about it is that it’s you who leaves. In many cases, the people that you tend to attract, try to hang on until the very end.

Unless you choose to mature, things are not going to change.

Those with a birthday on September 12, are best suited for careers involving detail analysis. As long as the parameters of a particular project are very spelled out and clear, you can do quite well.

However, if there is something that needs you to speculate, or think outside the box, you get lost easily. You have to know your limits. If you focus on what you’re best suited at, you will go quite far.

But, if you think that you can handle high level analysis, and speculative conjecture, and that kind of stuff. You may get in over your head.

You might get stuck at a job, that you really like, but can’t seem to get ahead. In other words, you have reached your limit.

Do yourself a big favor, and explore your curious side. I know it’s been several years, since you explored that side of your personality, You probably are under the impression, that it doesn’t exist.

You have an inborn sense of principle. You tend to operate based on principle. On the surface, this might seem like a great thing.

But the way you practice it, it actually holds you back. What you’re really doing is you’re just entertaining your fear and pride.

They tend to go hand in hand. You become so fearful, many situations that your pride becomes more and more sensitive.

You eventually can reach a point where you get offended easily, and your relationships tend to suffer.

Positive Traits of the September 12 Zodiac

If you are dealing with known quantities, and you know how the rules work, you tend to do really well.

We’re not just talking about better than average, we’re talking excellent. You excel in things that all the factors are pretty much known.

Unfortunately, life doesn’t work this way. In most contexts, there are always unknown variables.

That’s why there’s always a risk in everything that we do. In those situations, which is 99% of situations, you tend to struggle.

Negative Traits of the September 12 Zodiac

You become very emotionally manipulative very quickly. If you sense some sort of weakness in the people that you’re dealing with, you are quick to exploit that weakness.

You always try to make any kind of relationship work to your favor.

In most situations, you try to excuse your behavior by saying that since other people let you do it, then they somehow, someway, benefit.

Do yourself a big favor, and look at yourself in the mirror. Ask yourself this question, “Would I like to be treated the way I treat people who trust me?”. The answer should be obvious.

The particular aspect of earth that is most relevant to your personality is earth’s tendency to collapse around you.

If you’ve ever been on a sink hole, that is exactly the kind of feeling, metaphorically speaking, people have when under your emotional influence.

You could be a very charismatic person. You can really draw people into your world. The problem is, they like you so much, that they feel stuck. They don’t want to offend you.

The problem is you become so dogmatic, that anything that somewhat differs from your view of things is automatically interpreted by you as a threat.

The particular aspect of Mercury that is most readily apparent in your personality is Mercury’s very fast rotation. Your moods can turn on a dime.

On the one hand, you can be warm, caring, charismatic, and magnetic. You can be the world to people.

And then if they just say something off or they say something that is not in the right context, you turn on them. You become very harsh.

Your judgmental side comes out. And you end up bringing out the worst out of you, and the person you’re relating to.

My Top Tips for Those with a September 12th Birthday

Do yourself a big favor and explore your imagination. Also be more patient with other people.

Just because they don’t share the same values and vision as you, doesn’t necessarily mean they’re any less than you.

In fact, if anything, you can learn a thing or two from others with a different point of view.

The lucky color for those born on the 12th of September is cornflower blue.

The interesting thing about this variation of blue is that it seems like a very version of blue.

Make no mistake about it, blue is the color of power, but cornflower blue is kind of an ambiguous and insecure type of blue. This pretty much sums up your personality.

You have the inner workings of tremendous power. You are definitely charismatic and magnetic enough.

The problem is you are so dogmatic and so insecure that whatever power you’re capable of generating easily gets diluted and ultimately lost.

Those people born on 12th September are Virgo souls with an extra edge.

You have a more adventurous side than most people who are born under this zodiac sign, and that means that you have a wilder side to go with it.

People born on 12th September are good at planning and organising, sure – but they’re also just as likely to drop everything and go travelling on a whim, or trust their gut to chase down that perfect job.

These people work hard and play hard, and can be a little more a party animal than the stereotypical Virgo – although every Virgo definitely has a wild side.

It’s just that yours, if you were born on 12th September, is closer to the surface and more likely to come out to play.

Final Thought for the September 12 Zodiac

You are your own worst enemy when it comes to relationships. You really need to be more forgiving of differences.

You also need to be more accepting of the natural diversity people have. It’s okay to have different opinions.

It’s okay to have a different take on essentially the same set of facts. By welcoming each other’s differences you actually stand to become a stronger, more mature, and better person.