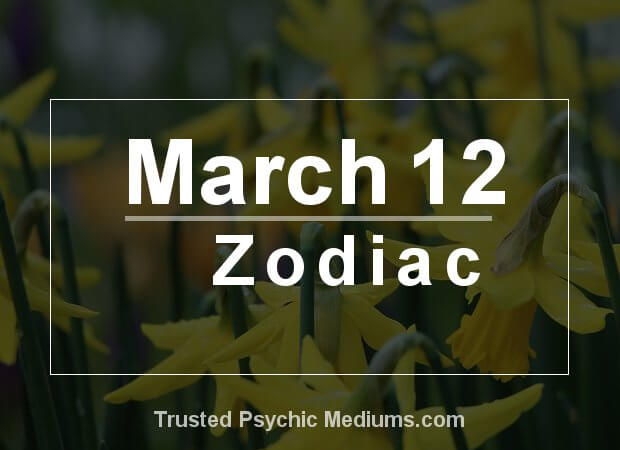 What is your Zodiac Sign if you were born on March 12?

If you are born on the 12th of March, your Zodiac sign is Pisces.

As a Pisces born on this day, you are known primarily as a creative, accepting and nurturing person. It seems like you wear your vulnerabilities on your sleeve and everybody knows it.

While you can be quite introverted and shy, once you warm up to somebody, you can be quite loyal. Not surprisingly, you tend to attract people that are ready, willing and eager to defend you.

This is the greatest paradox about you. The weaker you look, the stronger you become because you tend to attract people that are drawn to your accepting, nurturing and caring nature.

They become your defense force. They’re the ones who do the heavy lifting, so to speak.

When people try to offend you or try to insult you, they’re the ones who step up.

While this can definitely work in your favor, sometimes you take things to extremes and you become overly sensitive.

When you let this side of your personality take over, you come off as manipulative because it seems like you want to test your friends based on how willing they are to step up for you.

In many cases, people get tired of the games and start abandoning you. Do yourself a big favor and just make sure that you don’t try to manipulate people on an emotional level.

Lovers born on the 12th of March are quite accepting, nurturing and caring.

You have developed quite a bit of a reputation as a person who is not very confrontational. This means that your lovers tend to get away with murder.

Now, you don’t want to get this reputation because you will come off as somebody who is an emotional doormat.

Now, keep in mind that there are many definitions of that. One definition, of course, is the common one which involves people heaping all sorts of abuse at you, and you taking it like a trouper.

While that can definitely be the case in your situation, your emotional doormat status tends to revolve around a different definition.

You are rarely jealous and possessive to the point that your lovers often feel that they can cheat on you and not have to worry about consequences.

To make matters worse, you realize what’s going on, but you are so afraid of losing them that you don’t confront them.

As much as possible, you try to live with the very difficult situation, but, believe or not, you’re not helping anybody by allowing yourself to be stepped on.

You have to establish the rules, you have to assert your rights, otherwise, it’s time to leave the relationship.

Regardless of what you may think, there are people out there who will still find you attractive.

Don’t think that you’re stuck with this person who cheats on you and doesn’t give you the respect that you deserve.

Those with a birthday on the 12th of March are best suited for coordinator positions.

The interesting thing about coordinator positions is that these people are not necessarily leadership material. You just know how to coordinate between different groups of people.

This fits your personality like a glove. You know how to get along with others.

You also know how to coordinate with people so that they end up defending you or your ideas.

On the one hand, you are a very nice, kind and gentle person. On the other hand, you can be quite manipulative because you use your vulnerability as a sword as much as a shield.

You would do best to stay away from manipulating people’s emotions and focus more on accepting others and being a bridge between the different people who may be suffering from a misunderstanding.

Positive Traits of the March 12 Zodiac

This is the good side of your personality. However, there is a side to you that can and does take advantage of other people’s perceptions.

Once you get into that dangerous territory, then all bets are off. What would otherwise have been your positive traits can easily turn into negative ones.

Negative Traits of the March 12 Zodiac

One of the things Pisces people born on March 12 really need to work on is their tendency to become manipulative.

For most of their lives, they feel that they are emotionally vulnerable, and they are.

But this doesn’t give you the license to use other people as your own personal emotional army. Once they catch on, they won’t forgive you very easily.

Water is the paired element of all Pisces people.

Just like with all other Pisces, your emotions can often get the better of you.

Do yourself a favor and freeze some of those emotions. Water is remarkably stable when it’s frozen.

Neptune is the main ruler of Pisces people born on March 12.

While Neptune does have an idealistic, nurturing and caring side, it can also be very unreasonable and overbearing. This is, of course, your manipulative side talking.

Do yourself a big favor and try to strike some balance between your inner insecurity and your need to compensate by manipulating those around you. Believe it or not, there is a happy middle ground.

My Top Tips for Those with a March 12th Birthday

You should avoid using others to further your own agenda.

You have to remember that people are ends in and of themselves. They are not meant to be used.

While being manipulative can be second nature to you, you should avoid that temptation. You would be much happier if you did.

Your lucky color is Wheat.

The color Wheat means connectedness, it means sustenance, and it means comfort. It can also breed mold and decay.

The choice is always yours.

Being born on 12th March makes you a Pisces, which is a star sign that has a fantastic sense of romance and amour to it.

Every coupling in which this individual gets involved is a deep and meaningful love affair.

The same can be said of showy and dramatic Leo, and so sparks can invariably fly whenever these two star signs get together.

However, the actual reality of this relationship can make for some uncomfortable reading.

More often than not, Leo people tend to move from one conquest or area of showmanship to another, and you’ll find that the Leo partner is often trying to impress all kinds of people to ensure that their presence is recognised in all its glory.

Often this leaves the 12th March individual out in the cold, and triggers some clingy behaviour that just alienates Leo all the more.

What’s more, you as someone born on 12th March are prone to give of yourself absolutely, and sometimes to excess.

Leo will waste no time lapping up that attention, but might have little meaningful to offer in return – everything has to be about them!

Final Thought for the March 12 Zodiac

If you want to truly be happy, make sure that you find your security in yourself. Don’t try to find your confidence in others, it rarely works out.

Believe it or not, there’s a lot to like about yourself.

Become your own best cheerleader and you’d be surprised as to how much more emotionally balanced you will become.