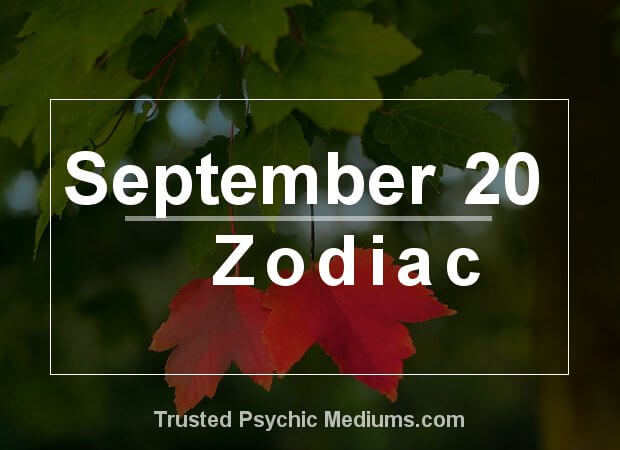 What is your Zodiac Sign if you were born on September 20?

If you were born on September 20th, your zodiac sign is Virgo.

As a Virgo person born on this day, you are a very idealistic person.

Now, this doesn’t mean that you have this grand idea of how the world should be, instead, you believe that your life should operate according to certain rules.

In many cases, these rules run contrary to how things really work. As you can well imagine in those situations, you become very disappointed.

What began as idealism eventually becomes cynicism. You become really, really toxic after some time.

You find it very difficult to meet new people and not instantly be skeptical or suspicious of their motives. All these can be traced back to your unrealistic idealism.

Lovers born on the September 20th are easily some of the most cynical lovers in the horoscope. By cynical, I’m talking about people who want to fall in love.

They definitely put in the effort to try to hook up with people on an emotional level, but once the process gets started, they become really doubtful.

In fact, they get so doubtful, that they end up sabotaging the relationship. They believe that if they’re the first person to walk out of the relationship, then they won’t get hurt.

What they’re really doing is that they’re trying to prevent getting hurt. The problem with this is that, it makes the law of attraction work against you.

Unfortunately, September 20 zodiac people tend to attract the wrong partners almost all the time because of this process.

Your natural skepticism and suspicion actually works in your favor as far as your career is concerned.

Indeed, Virgo people born on September 20 would do best in careers involving any type of policy analysis.

Whether you are reviewing and critiquing legal, financial, medical, or even artistic policy, your skepticism and suspicion can help you poke holes in overly optimistic assumptions and thereby help the organizations you work for save money, avoid bad decisions, and otherwise gain a positive benefit.

You have an inborn sense of what’s right. You look at any situation, or any particular aspect of your life and you come up with all these ideas as to how things should be.

While this may be a good thing, because you at least are operating with some sort of guide, or some sort of template, it can be quite constricting.

You have to remember that life cannot really be lived in the same way as you would treat a coloring book.

In many cases, it’s okay to color outside the lines. It’s okay to use weird colors. The focus should be on the experience.

You should keep this in mind. Otherwise, it’s very easy for you to live a very unhappy life.

Positive Traits of the September 20 Zodiac

Since you do have high standards, as far as ideals are concerned, you can be relied on to inform people or remind them of how things should be.

As long as they agree with you, this works really well.

You are kind of like the custodian of standards. Make no mistake about it, if you want to achieve any kind of excellence in this world, you have to have standards.

You have to have certain criteria you should aim for.

Negative Traits of the September 20 Zodiac

You probably don’t need me to list the negative traits of the September 20 zodiac because there’s too many of them. You already know this yourself.

However, if you were to focus on one negative trait that you really need to work on, it’s your skepticism and suspicion.

What this all really boils down to is that you’re so afraid of being disappointed that you get disappointed all the time.

It happens so frequently that you then lose any hope of ever coming across a happy surprise.

When things are going well, you become really suspicious until your negative expectations become a self-fulfilling prophecy and you are ” satisfied” with the fact that your worst-case prediction came true.

This is no way to live, seriously.

The particular aspect of earth that is most relevant to your personality is earth’s tendency to swallow you up if you add enough water or sand into a ditch.

Try it. Put earth in a ditch and add a lot of water. When you step on it, you’re going to sink.

Unfortunately, this is the big challenge to you. You think that your skepticism, and cynicism of people’s motives, objectives, and agendas, somehow protect you. No, they don’t. In fact, they corrode your life.

The particular aspect of Mercury that is most relevant to your personality is that Mercury moves so quickly that it seems to turn on you.

You may dismiss it as going on the far side of the sun and then all of a sudden it goes back to the other side. That’s how fast it rotates.

The same applies to your personality. When you find yourself in any new situation, you think that there’s something off. You think that something is not quite right.

And sure enough, you end up saying things, or doing things that make the worst case scenario possible. Stop doing this.

My Top Tips for Those with a September 20th Birthday

You should avoid being your own worst enemy. If you’re unhappy, or less than fulfilled with your life, it’s because you chose to be that way.

The lucky color for those born on the 20th of September is turquoise.

Turquoise is kind of an interesting mix of blue, and yellow, and green. It has the potential to be a very cultivating and empowering color. Blue and green after all are powerful colors.

But the problem is it’s kind of lost in limbo. And this summarizes your attitude. You have a personal capacity for doing well in all areas of your life.

You really do. The problem is your skepticism, and cynicism really gets in the way, and you fail to achieve much of anything.

Every one of us shares a birthday with someone famous, yet literary names of the recent age don’t come bigger than the 20th September zodiac writer and novelist, George R R Martin.

The gritty, in-depth tales spun by his hand have sparked imaginations for decades – to say nothing of the TV sensation they inspired in turn.

Martin’s gift for backing up his fantasy worlds with believable details and richly researched medieval lore and customs speaks to the detail-oriented mind in every 20th September zodiac soul.

The gift that people of this zodiac arrangement share is one for imbuing each of their ideas with enough detail to make them credible.

Fantasy is not always the most simple of genres for the average audience to get into, either – yet by taking such a mature and adult approach to telling these stories, Martin proved that his ideas could transcend demographics to be a universal sensation.

Final Thought for the September 20 Zodiac

Believe it or not, you can be a very loving, warm, funny, sincere, and genuine person. You can be very optimistic. I know, that sounds almost foreign.

Once you start to develop a mature relationship with whatever past trauma, you are dealing with, you would be several steps further, along a more powerful and fulfilling life.