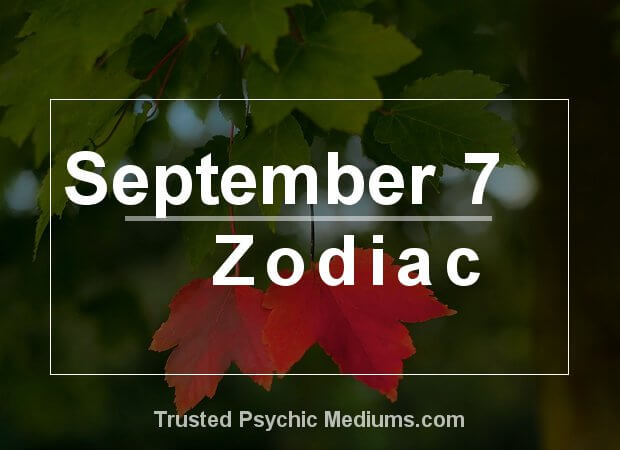 What is your Zodiac Sign if you were born on September 7?

If you are born on September 7th, your zodiac sign is Virgo.

As a Virgo person born on September 7th, you are a very idealistic person. You really believe that life on earth has to follow certain rules.

While you are a typical earth sign in the sense that you tend to focus more on the practical aspects of life, you are still deep down idealistic.

In other words, you’re looking at basic things like making money, being responsible of your finances, or making sure certain things happen in you’re life, but you approach them with an idealistic mindset.

Well, this combination of both pragmatism and idealism can be a great thing.

But in your case, it usually veers off to dogmatism. Be very careful of dogma because it can get the better of you.

The reason for this is because pretty straightforward. While you can be very charming and even magnetic the first time you meet your romantic partner, the more they come to love you, the more you impose all these dogmatic and often impossible standards from them.

What makes matters worse is that you often expect things of people that you don’t expect of yourself. The most accurate word to describe this, of course, is hypocrisy.

Those with a birthday on September 7 are best suited for careers involving policy.

Usually, when people think of policy setting, they automatically think of government. This does not have to be the case.

You’re great with coming up with policy statements and policy guidelines because you are a very idealistic person.

Now, with that said, you’re also very pragmatic. So when you put these two factors together, a career in policy-making would best suit your personality.

You have an inborn sense of how things should be.

Now, don’t get me wrong. You see how the world works. You have a clear understanding of how things are. But, you also have a strong sense of how things should be.

Not surprisingly, you tend to carry yourself like a person who knows better than the other people around him or her.

While for the most part you’re able to play this off, it does get under the skin of certain personalities.

Positive Traits of the September 7 Zodiac

Since you’re the type of person who not only could recognize how things are but can also focus on how things should be, you are a great ally.

If you want the world to change, partner with a September 7 Virgo.

September 7 Virgos not only figure out what to do, but they also develop clear ideas as to when to do it, why to do it, and who to do it with. You are the man or woman with a plan.

Negative Traits of the September 7 Zodiac

Your hypocrisy will be the end of you, seriously. Whether we’re talking about your relationships, your career, or your education, hypocrisy often creeps in.

As mentioned above, hypocrisy really boils down to a certain standard that you yourself don’t want to live by. That is wrong.

If you’re going to impose your standards on others, make sure that you’re ready, willing, and able to live by them as well. Walk your talk.

Otherwise, it’s going to be very hard for you to be considered credible.

The particular aspect of earth that is most relevant in the September 7 Virgo personality is earth’s tendency to turn into mud.

If you’re wearing something white and somebody threw mud at it, you probably can get the mud off pretty quickly by scraping it off.

The problem is to get it completely off, you have to thoroughly wash it.

Now, why am I talking about mud? Well, September 7 Virgo people do not hesitate to throw mud at others. But in the process, they often get mud on themselves.

And the worst part is that they’re completely clueless. They end up talking a big game and people could see that ultimately, the emperor wears no clothes.

Do yourself a big favor and make sure you lead by example.

The particular aspect of Mercury that is most readily apparent in the September 7 Virgo personality is Mercury’s tendency to rotate so fast around the sun that you could easily see that it’s both bright and dark.

In other words, it has two qualities at the same time.

One definition of hypocrisy is inconsistency. Mercury spins so fast that it’s inconsistent appearance highlights the hypocrisy that often troubles and hounds September 7 Virgo people.

My Top Tips for Those with a September 7th Birthday

The key to your personal success is actually pretty straightforward. In fact, you probably already know it. It is as simple as walking your talk.

That’s right, if you’re going to impose certain things on other people, make sure you already have mastered those things.

Best of all, lead by example. In other words, if you’re going to insist on a little from others, make sure you bring a lot.

The lucky color for those born on the 7th of September is represented by floral white.

White is the color of power, purity, and ideals.

Now, what’s interesting about the color floral white that represents the September 7 Virgo personality is that floral white has power in its ideals, but it is so decorative.

It’s so caught up in looking good that its power is simply undermined. Eventually, people just look at floral white in purely decorative terms.

This really is too bad because it can offer so much otherwise. Don’t let this happen to you.

Lucky Numbers for the September 7 Zodiac

Despite the pragmatism and realistic outlook on life that Virgo people born on 7th September tend to have, there’s a secret and inwardly romantic side to these people that rules over them in affairs of the heart.

Love to these folks is confusing and impossible to rationalise, despite how smart they are.

Unfortunately, this idealisation of romance often makes people born on 7th September apt to attract the wrong kinds of people.

They will either draw in big dreamers who always promise more than they can deliver out of misplaced idealism, or charmers who just want to play mind games.

It can create a cycle of hope and heartbreak that seems impossible to solve – not least since Virgo will analyse the situation rather than themselves to find out what’s at fault.

Over time, hopefully the opportunity arises to learn more deeply about the self, and remedy this more dreamy side of romance to something more attainable and workable.

Final Thought for the September 7 Zodiac

You have what it takes to be a truly effective person. You also have a great heart when it comes to changes and wanting to help.

If you’re able to do all of these things, you can go quite far both in terms of achievement, as well as influence.