Ace of Swords Tarot Card and its Meaning 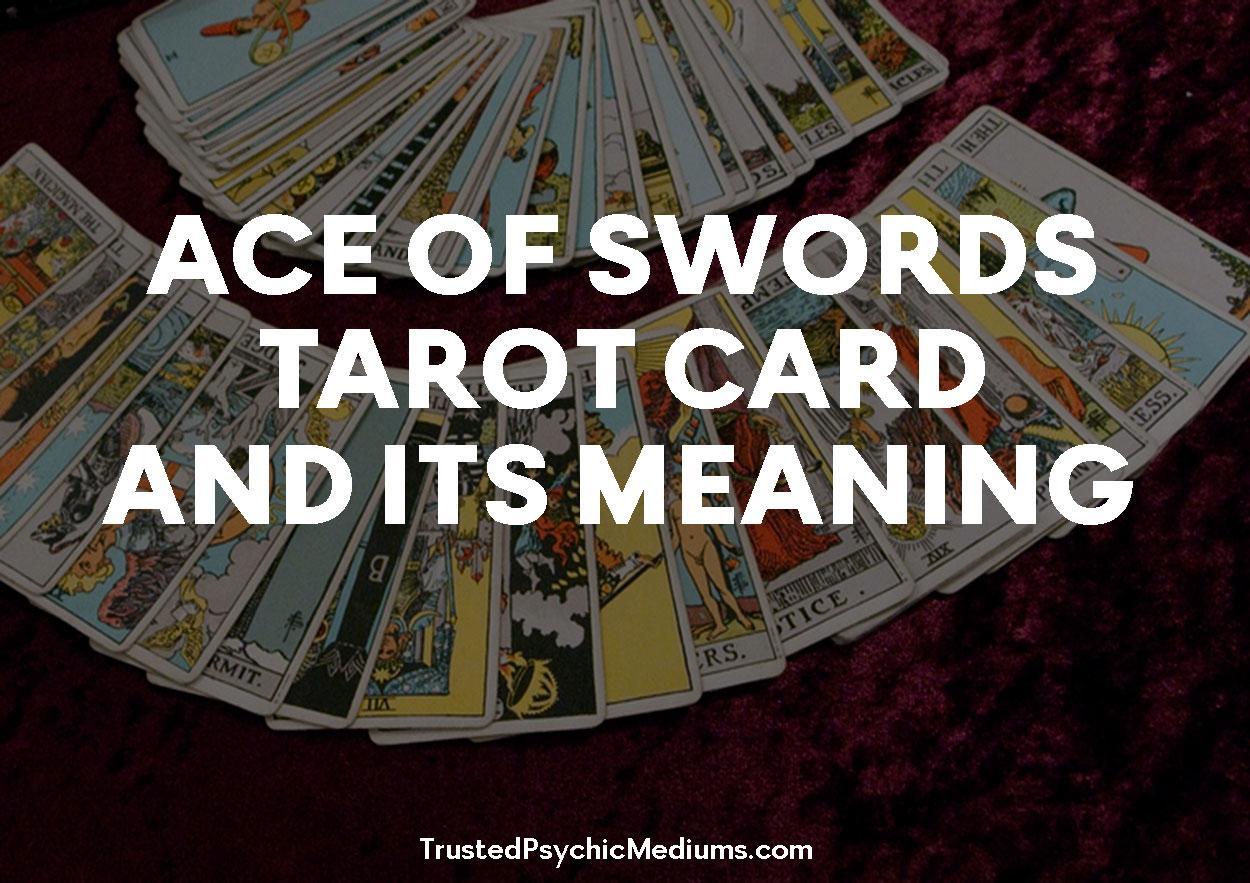 The Ace of Swords tarot is the card for raw power and mental clarity. It signifies victory and breakthroughs.

It indicates focus and vision, force and focus, just like the Nine of Pentacles. It’s about clarity and insight.

The Ace of Swords tarot is depicted as a white hand holding a sword in the upright position. It symbolizes the mind and the ability to see the two sides of a situation.

There is a crown at the tip of the sword, symbolizing mental clarity. The crown is adorned with a wreath that symbolizes success and achievements.

But there is also a cold and desolate-looking mountain in the background, which symbolizes the cold and passionless nature of the mind.

The Ace of Swords tarot can indicate the shifting of attitudes, or replacing an old one with a new one. With this newfound clarity, you can clearly see two sides of a story and find the best and most suitable solution.

The Ace of Swords tarot also signifies reaching a breakthrough when it comes to conflict and struggle.

It is usually a card that tells you to use your potential in a manner that will help a lot of people or be beneficial to many.

The Ace of Swords denotes a new creative vision, or an idea, or an inspiration, just like the Eight of Pentacles. This can symbolize new opportunities that will test your creative and intellectual capabilities.

It inspires you to seek the truth, find justice, and stand up for the rights of others.

Ace of Swords Tarot and Love

When it comes to love and relationships, the Ace of Swords tarot simply wants you to concentrate on what is on your mind.

If you’re in a relationship and there’s something that’s been bugging you about it, you can do something to make it stop. Now is the time to speak your mind.

Stop suffering in silence and let your partner know exactly what you think.

Most relationships don’t survive because the people in them are afraid to admit that something is wrong. They refuse to talk about the problem and just let the wounds fester. They keep everything bottled up inside.

One day, they just wake up and they can no longer recognize one another. They can’t believe how quickly things went downhill.

If your partner leaves you for speaking up, that’s not your loss. Know that you deserve someone better, and that a good and healthy relationship will happen for you in the future.

All relationships go through problems and rough patches. But with the Ace of Swords tarot, it indicates that there is not enough willpower in the two of you. It is the exact opposite of the one symbolized in the Two of Cups.

You will overcome problems eventually, but it also indicates an end that you’re not quite ready to accept.

It can mean a parting of ways, or working through the hardship together. Whatever the outcome, and no matter how bleak or blissful you think it is, it’s a win-win situation.

The Ace of Swords tarot can also indicate a dictator in the relationship.

He may be controlling, demanding, or manipulative. You may be difficult, selfish, and stubborn. As a result, there is tension and unhappiness. And almost always it leads to disagreements and fights.

Overall, the Ace of Swords tarot is the bearer of good news. When it comes to emotions, this card symbolizes infatuation. Yes, your crush is crushing on you, too. You caught him several times stealing glances at you.

Does that mean he’ll be asking you out soon? Probably, but it really depends on the other cards that surround the Ace of Swords tarot. But he likes you in a non-friend kind of way, so that’s a great start.

When the Ace of Swords is in the reversed position, it can symbolize confusion and the loss of willpower.

You and your partner don’t know what’s wrong with the relationship and you have no idea how to resolve your issues. Feelings of frustration abound.

It can also mean infidelity or taking advantage of the other person in the relationship.

Is the Ace of Swords a Sign of Good Luck?

The Ace of Swords has a very distinctive design to it showing an upright sword on the face and a downward sword on the reverse.

It represents the first card in the suit of swords, and it is regarded as being quite a powerful sign that is often indicative of good luck coming your way.

However, that is not always the case as it depends on the context in which the card is drawn.

As it is the ace, it is also viewed as being the purest embodiment of its suit. Regarding you, it is viewed as being a card that describes a sense of both focus as well as determination.

However, it can also represent periods of change that may come about abruptly while also representing a sense of there being the potential for conflict of some kind.

This conflict can also be internal where you are battling with deciding on different decisions.

If it is drawn in connection with the past, it shows that change has occurred and it then set various other things in motion that now cannot be changed.

It involved you using up an intense amount of energy, but that you did so for the sake of what you saw to be the greater good.

In this sense, it is not viewed as being a card of good luck since it refers to events that have already happened.

When drawn for the present, it represents a change in your life or a brand new phase that you are about to enter.

This can also be a sign of a drastic alteration in the direction of your life. However, it can also represent a lack of clarity as to how things will pan out.

The good news is that it represents strength and determination, so you will be able to survive whatever the change may be.

When drawn for the future, it can be viewed as showing courage and that there may very well be an amazing opportunity just awaiting you around the corner.

When it comes to the future aspect, then it does certainly indicate that luck is going to be on your side.

Overall, the Ace of Swords can be a slightly mixed bag when it comes to it representing either good or bad luck. However, it is certainly far more positive than negative.

The key here is that it shows a decisive change in your life or the direction in which it is heading, but the fact that it is also linked to victory can be viewed as being important.

In that sense, it will be seen as showing a brighter, and better life which then cannot be affected by any bad luck that may be circulating around.

Drawing this card should, therefore, be met with a certain sense of excitement rather than dread.

It leads to better creativity, stronger conviction and courage in your decisions, and justice is going to be on your side.