Death Tarot Card and its Meaning 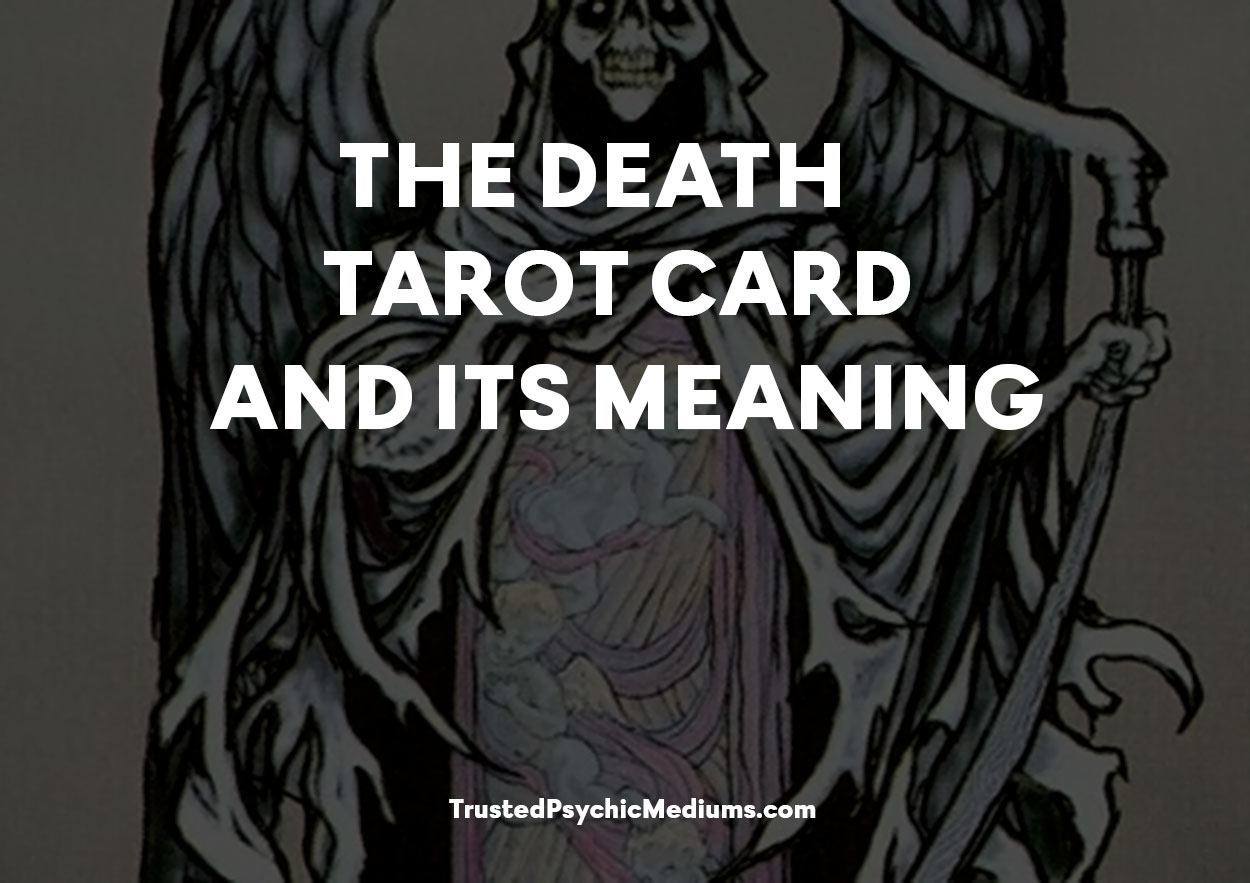 You say Death and people grow quiet, nervous, or scared. The Death tarot card evokes the same reaction, which makes it the most misunderstood and most feared card in the tarot deck.

Before you let your imagination get the better of you, know that the Death tarot card can also signify good and positive things, and not just death.

Death is shown riding a white horse, symbolizing purity, while holding a flag with a black background, representing the absence of light. The white flower on the flag signifies purification, beauty, and immortality.

Death is portrayed as a skeleton wearing a suit of armor, which symbolizes his invincibility. The gray background signifies Death’s fairness and neutrality.

The Death tarot card is ruled the zodiac sign Scorpio and is number 13 in the deck. It simply means change, transition, and transformation. It means endings and beginnings, like the Fool or the Magician.

It means a time for renewal in all facets of your life. It signifies circumstances changing, and losing or ending connections and relationships with things and people.

Death can also be an indication of letting go of negative attachments and old ways. It’s about closing doors and opening another. It’s about transitioning from the known into the unknown.

It’s about getting rid of what isn’t necessary and going back to the basics. It’s about leaving it to fate and accepting what is inescapable.

Death wants you to know that the best decision you can make for yourself today is to let go of the relationship you have been trying to save for the longest time.

Okay, fine, you can’t imagine waking up in the morning without his sleeping body on the other side of the bed.

You can’t stand the thought of going home to an empty house, or shopping at flea markets with no one to judge your purchases, or going to the movies alone, or attending friends’ parties solo, or celebrating holidays by yourself.

If these are the only reasons why you are still holding on to your relationship, they’re not good enough. Stop trying to make excuses and have ‘the talk’.

This is the only way you’ll know if he’s in for the long haul or if you need to start breaking up.

Remember that some relationships can be saved, while others are just beyond redemption. Don’t beat yourself up. If this is your fate, you just have to let it happen.

When it comes to money, Death suggests that you have to make some sacrifices to face your financial challenges.

There’s a chance that there will be a loss of income, or your job responsibilities will change, or you may suffer some losses in stocks.

It can only mean that you have to go back to the basics when you have the chance, and concentrate your efforts on what’s truly important. Get rid of the unnecessary.

Death Tarot’s Meaning for the Future

When Death figures in your reading for the future, it doesn’t mean someone you love or someone you know is going to die (although we all will sooner or later).

This is more of a sign of a looming death of a great friendship or what used to be a stable relationship.

If you think your job is untouchable, well, not really. You might want to start updating your resume and your Linkedin profile.

Death is symbolic of changes in your future, just like the Wheel of Fortune. It’s the cutting of ties between your past and your future.

It will hurt like hell and you will want to take back your decision at one point, but it has to be done in order to move on to your easier, better, and brighter future.

The sooner you accept it, the easier it will be. Relationships end. Jobs are lost. Friendships are severed. People die.

This is the reality of life. Don’t fixate on the negative. Instead, focus on what you stand to gain.

Your whole life is ahead of you, so just soldier on like the brave and strong warrior that you are!

Is the Death Card a Sign of Good Luck?

The problem with the Death card is that people automatically assume that things are going to be terrible and that the future is dark no matter the direction in which you turn.

However, it is important to point out from the start that it does not have to mean a physical death is going to occur, so there is the potential for this card to be far more positive in nature than most people are perhaps going to be aware of.

Instead, it is used to signify that the person may be letting go of something from the past or about to enter into a new beginning.

There can also be a sense of a spiritual transformation and that the old way of thinking or acting for the individual is no longer working for them, so changes are about to occur.

In other words, this does not have to be as bad as you think.

It points you in the direction of letting go of the past and allowing the new life that then comes with it to fully absorb you.

It can be exciting and it can mean that you are indeed ready for these changes to take place in your life.

Things are going to be on your side, and if you accept the Death card and what it can signify, then the transition can be extremely smooth rather than being filled with issues and problems.

However, resist it, and obstacles can be placed in your way at which point the idea of it being linked to a sense of good luck is going to clearly diminish.

If you draw the Death card in reverse, then it still does not have to then signify something negative happening to you.

Instead, it can point to you having a certain degree of resistance to change and that this is something that has to be dealt with or it could lead to further problems for you.

There is also the idea that you will be unable to resist this for the rest of your life, so there is a real need to just let go and sink into it rather than battling it with all of your energy.

Even in the reverse position, there is still little concept of bad luck and the card is merely telling you that you need to be willing to let go, and if you do then things are going to work in your favour.

Overall, the Death card does get a bad press as it is not as negative as some people perhaps like to think.

It can indicate that there are new beginnings and this can be very positive and completely change your life for the better.

It can help you to let go of those things that have been holding you back and to then enjoy the new energy and life that is placed in front of you.

If you do not resist, then the Death card can indeed indicate that good luck is on your side.

My Final Thoughts on Death Tarot

The Death tarot precedes an ending and very seldom is it an actual death. It’s always more of a death of your present self or your present situation.

Almost always it is a death of a relationship, and often with a substantial release of pain and emotions.

What Death wants to remind us is that in the natural cycle of life, as things begin, so they shall end. The reasons are many.

Maybe you have outgrown each other and the relationship. Maybe you have found happiness someplace else. Maybe it’s not just what you need anymore.

Whatever the reason, some deep reflection and real forgiveness are required. You gain insight and experience some sort of fulfillment when you end something. Allow yourself time to grieve and acknowledge the feeling of loss.

There is much to be gained even if you feel like you have lost a part of your life. In Death, you get to know a part of yourself on a deeper and more spiritual level.

In experiencing loss and ending something, you learn how to appreciate things in your life while you still have them.

The Death tarot card wants you to know that it need not be a sad and painful affair. Death means an end to something and a new start for another. It’s rebirth, a fresh start.

It’s having an empty space for something better and grander. The best thing to do right now is to accept things and start the process of healing.

An excellent way to get you started is to visualize yourself getting out of the dark place into a more colorful and happier place.

See yourself laughing and having a fun time at your most favorite place in the world. Visualize yourself stronger, slimmer, and healthier.

Visualize what your future house will look like, how wonderful your next relationship is going to be, and how successful you’re going to be in your next job.