Five of Swords Tarot Card and its Meaning 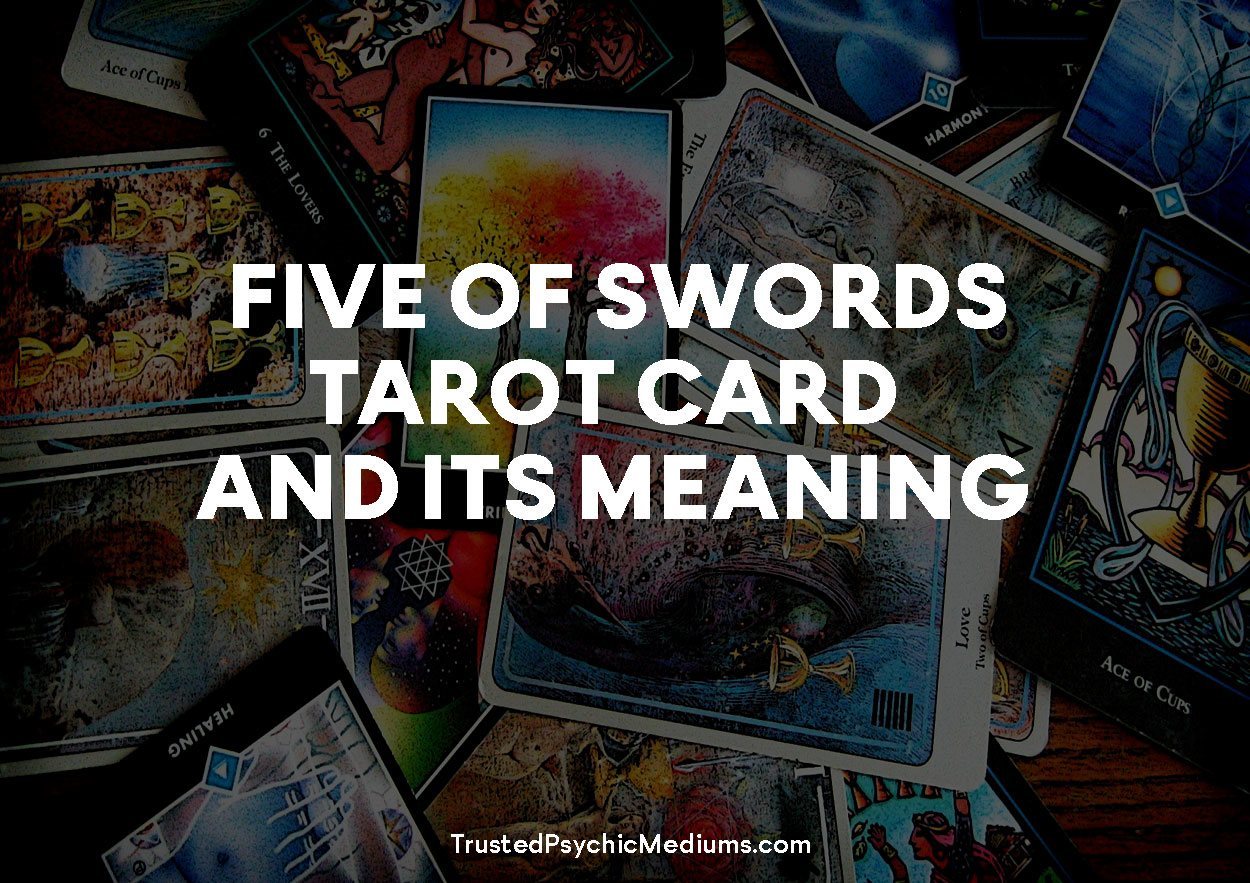 The Five of Swords tarot symbolizes conflict and tension. It’s also the card that represents betrayal, loss, or defeat, just like the Five of Pentacles.

It means winning at all costs, or achieving victory by surrendering.

It also speaks of choosing a direction, of standing firm, and of meeting challenges.

It signifies faith, action, and change, as well as strategy and confidence.

The Five of Swords tarot is depicted as a young man who looks on in disdain at his defeated enemies. He has gathered all the five swords of his enemies, who are shown walking away in dejection and sorrow.

Overhead, the sky looks dark and heavy, signifying that even though the battle is over, all is still not right.

The Five of Swords tarot symbolizes that you are engaged in a conflict of sorts, or you are in disagreement with someone over something.

The situation is tense and hostile. You may think that you won this round, but you’ve only succeeded in hurting others and cutting yourself off.

You have only managed to lose everybody’s faith in you, and now they don’t want anything to do with you. This may be a time when it feels like you have no one left on your side.

It’s a time to make some compromises and try to see things eye to eye.

The Five of Swords tarot also symbolizes conquest. Your aggression will lead you to accomplish your goals. If you are more passive, you may have to give in to the demands of the other camp.

You have your work cut out for you. There will be more hurdles ahead. Things that can go wrong will go wrong and you have to be ready for conflicts with other people.

The Five of Swords tarot can represent too much ambition. You don’t care about the consequences. You have to win at all costs. You don’t realize that winning may not even be the reward.

Be careful with a kind of attitude like this. You are not as invincible as you think, and one day soon you will find your match. If you won through dishonest means, be prepared for karma or vengeance.

The Five of Swords tarot also indicates a betrayal by someone close to you, so be careful about any form of attack that may come to you.

It can also symbolize plain defeat. Despite your valiant efforts, they’re just not enough to make you win this time.

Five of Swords Tarot and Love

When it comes to love and relationships, the Five of Swords tarot wants you to know that you are governed by selfishness.

It also means that conflict will always be present and it may not end in a happy ever after.

Be clear on what your deal breakers are in a relationship. Accept the reality and be honest with your partner.

The Five of Swords tarot also indicates a rivalry or a competition in a relationship.

It can mean clashing all the time until one just gives up because he or she just can’t take it anymore, like the Eight of Cups.

Or it can be that one feels superior while the other feels defeated most of the time.

You may feel pressured to do something that you don’t like. You are being exploited.

You can also be the more dominating one and you control your man like he has a leash around his neck.

Love and respect are absent in the relationship, which is somewhat alike with the Four of Cups.

When it comes to emotions, the Five of Swords tarot is telling you that you are too much to handle.

It can also mean that you are too quiet and passive.

When the Five of Swords tarot is in the reversed position, this signifies striking a balance. You and your partner are able to share a selfless kind of love.

There are still arguments and disagreements but you don’t do it to hurt or to spite. It doesn’t matter who wins or who loses.

It’s more of a way to express how you feel and to keep the relationship from being toxic with resentment or other ill feelings.

Five of Swords and Money

When it comes to money and wealth, the Five of Swords tarot wants you to exercise restraint. Use your creativity and ingenuity to earn extra. Consider selling things that you no longer need.

Cut your expenses to stretch your dollar. Live within your means. And remember that help is always available if you ask for it.

Five of Swords Tarot’s Meaning for the Future

The Five of Swords tarot acts as a beacon of hope and a warning when it comes to the future.

With your power and independence, whatever is holding you down in the present will no longer be a problem for you in the future.

Continue living your life with dignity and integrity. Anything else that will come your way with hopes to take you down will not succeed.

The Five of Swords and its Meaning for Health

The Five of Swords is not always going to be a positive card for you to draw, but then it also does not have to be all doom and gloom.

This applies no matter if you draw it in the upright or reverse position, and there is a sense of each part of your life potentially being a bit more difficult than you would perhaps have liked it to have been.

In fact, you may be struggling with stress and anxiety, or you could have been fighting against an illness lately and that fight has left you feeling rather drained.

It is also trying to tell you that there is a very real need for you to take more care about you health and to be more aware of what is actually going on.

It can also be viewed as a warning that you should not attempt to deal with issues by turning to things such as alcohol or drugs as that can also then lead to further problems that will then potentially become impossible to deal with.

However, even though it does appear to be quite a negative card to draw in the upright position, things are slightly better if you draw the Five of Swords in reverse.

With this, it can potentially indicate that the future is going to improve, but there are a number of things that you need to be willing to do in order to allow this to happen.

For example, it can mean that you have been struggling with an illness but that there is a solution out there if you are only able to look for it.

There can also be a sense of a compromise of some kind or being required to give up something in order to improve your health.

This can be something as simple as noticing that you are allergic to something and that removing it from your diet or life leads to a vast improvement in your health.

The key is that the Five of Swords in reverse indicates that there is a solution and it is not a lost cause by any means. You just need to be open to the idea of looking for it in order for it to then take effect.

So, while the Five of Swords may not be filled with joy when it comes to your health, it perhaps does not paint as gloomy a picture as you may have initially feared.

Perhaps see it as more of a warning sign rather than anything else in order to remove some of the stress that you may feel is then going to get on top of you.

Overall, learn to listen to yourself is one of the main ideas being put forward by this card or you could run into problems.

My Final Thoughts on Five of Swords Tarot

With the Five of Swords tarot, it simply asks you to pick your battles.

You may feel the urge once in a while to fight back and hurl expletives to get the load off your chest, or even just to show others how right you are.

But this can only create a toxic and hostile environment for you, and you don’t want that.

If you choose temperament over peace every time, this will have a very unhealthy effect on yourself and your relationships. Not everything is worth getting so worked up for.

Don’t let things escalate unnecessarily. Practice patience and understanding in everything that you do.

When you’re feeling incensed, breathe deeply and count from one to ten before opening your mouth to speak. This will calm you in more ways than you can expect.

The Five of Swords tarot wants you to ask yourself: How do you feel about being right all the time?

Can you handle loss or defeat well? What challenges or conflicts were you able to handle with calm dignity and quiet courage?