Knight of Cups Tarot Card and its Meaning 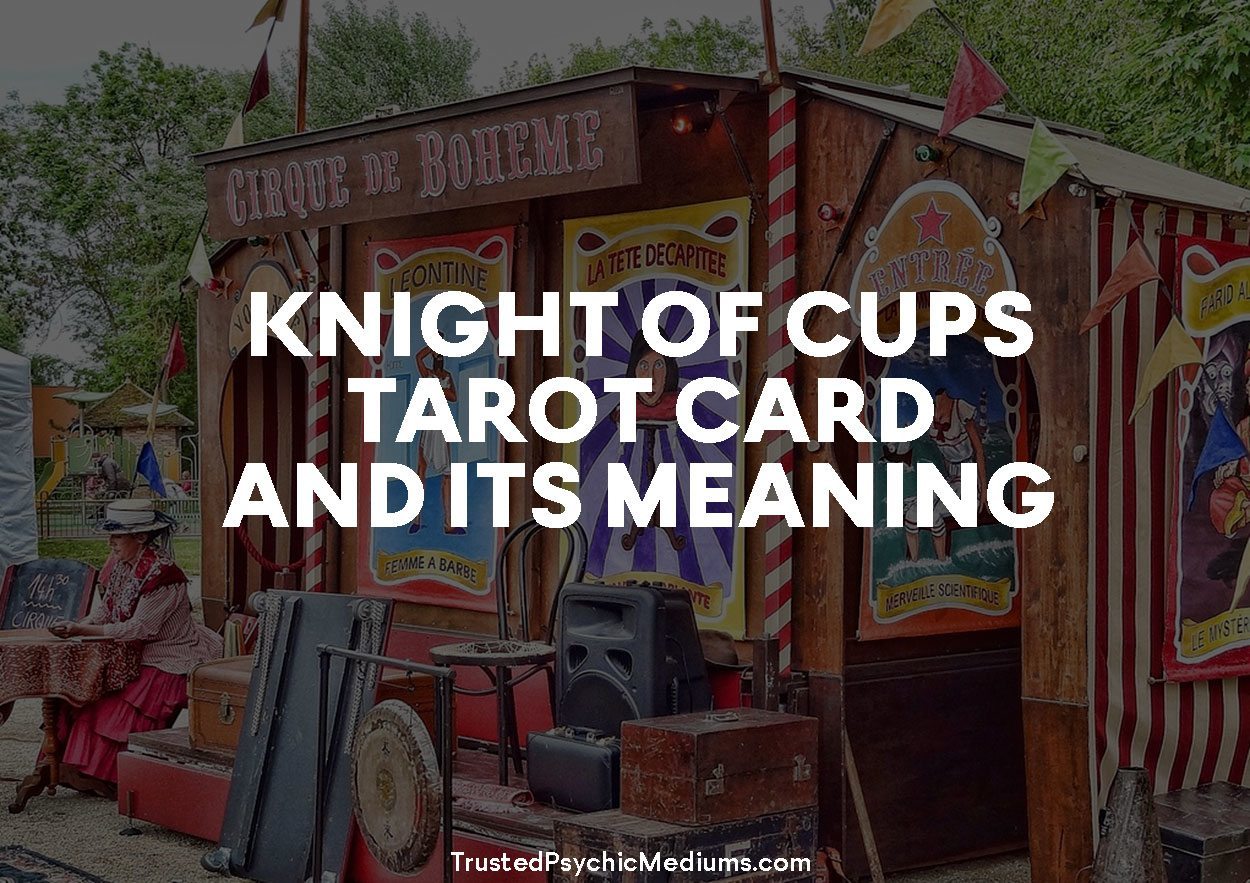 It represents creativity and new opportunities, and arrivals and proposals. It symbolizes invitations.

The Knight of Cups is depicted as a young and gallant knight riding a majestic white horse while holding a golden cup in his right hand.

The manner in which he clutches the cup says that he is some sort of messenger. He shows no hurry in delivering the message, either, as shown by the slow movement of the horse.

The horse symbolizes calm and peace, power and drive, purity and spirituality.

The fishes that adorn the Knight’s cloak symbolize the spirit and the consciousness, just like in the Knight of Wands.

The wings that adorn the Knight’s helmet and feet symbolize an imagination that is active and alive.

The Knight of Cups speaks of being in touch with your emotions and your intuition. More often than not, the Knight of Cups uses his touch of femininity when he wants to romance you or to seduce you.

The Knight of Cups is overflowing with charm and wit. People cannot help but be attracted to the Knight. It may be because of the uniquely romantic way he sees life.

Or it can be that it’s refreshing to be with someone who is in love with the thought of love itself.

The Knight of Cups does not hesitate to turn to his reserve of emotions whenever he feels lost, tired, or uninspired. He follows his heart more than he follows his head.

He lets his feelings guide his actions and make his decisions for him. Logic be damned!

The Knight of Cups can make himself known as an event or a person in your life, or even a part of yourself, similiarly to the King of Cups.

The Knight of Cups represents an invitation that can give you an incredible emotional experience, which can result in renewed energy or exciting new opportunities.

It can also represent an arrival of a person or an object that you can benefit from emotionally.

The Knight of Cups also represents the wisdom that comes from your dreams that allows you to hurdle all of life’s obstacles.

Knight of Cups Tarot and Love

If you’re single and looking for the perfect man, the Knight of Cups is a positive tiding that love is arriving at your doorstep soon. Make sure that you’re ready and waiting to open that door!

If you’re casually dating, the Knight of Cups indicates new possibilities popping up. Someone will ask you to be his girlfriend. Someone will want to introduce you to his buddies, or even better, his parents!

The Knight of Cups represents relationships taking root, and love blossoming. It represents the best of times with your lover, just like the Knight of Pentacles.

In the reversed position, though, the Knight of Cups can indicate deception. It can mean that one person in a relationship is unfaithful, or is a sham.

Return the ring. There’s not going to be a wedding.

Cancel the trip to Bora Bora. You don’t want to go and remember the cheating bastard every time you hear the ocean or sip on pina coladas.

When it comes to dating, the men are uninteresting and deceiving. They are more interested in getting laid than getting to know you.

The emotions are shallow and fleeting, and often easily dismissed. The sense of commitment is practically nonexistent. Don’t push it. It just won’t work for you right now.

Knight of Cups Tarot and Money

When it comes to money and wealth, the Knight of Cups indicates that new offers are in the horizon. It is a great and positive sign.

You will find new ways and new opportunities to increase your wealth. So go ahead and strike while the iron is hot!

There can be a substantial bonus, or a promotion at work. If you are employed, there can be an opportunity to venture into a new business or a new project that has potential to earn.

In the reversed position, the Knight of Cups warns you to think it over a hundred times before going into something that involves money. Look before you leap!

Knight of Cups Tarot’s Meaning for the Future

The Knight of Cups in the future position wants you to know that focus is the key.

Stay focused on your goals and stay true to your beliefs. You will see progress, just keep moving. It doesn’t matter how slow you go, just as long as you keep going.

Remember that haste makes waste, so it’s not always a good idea to rush these things.

To be successful with this endeavor, you must establish clear goals at the start. You have to have willpower and strength to continue on even if you feel like giving up.

Keep walking, and you will arrive at your destination.

The Knight of Cups and its Meaning for Health

The Knight of Cups is a minor arcana card that is generally associated with the idea of getting some good news, proposals, and just general positive things in your life.

This does mean that it could bode very well for you if it is drawn in the health sector of your life, and when you examine things more closely, then you will see that this is indeed the case.

For health, when the card is drawn in the upright position, this is regarded as being a good omen especially if you are currently in the position of waiting for some tests to arrive.

There is a real sense that your health is improving and that any kind of recovery is going well even though it may have initially been quite difficult on you.

There is an idea that you are effectively emerging from the darkness and that a better future is clearly going to be on its way.

The picture does become slightly different if you draw the Knight of Cups in reverse position although it still does not have to represent something terrible or awful about to happen to your health.

Instead, it is certainly much more like a wake-up call that you should really be paying attention to whenever possible.

In this instance, it may represent the idea that you are currently living a rather hectic lifestyle that is just too fast-paced for you to really keep it up.

This is telling you that it may be in your best interests to slow things down a bit or your health could very well be affected by it later on.

Furthermore, the Knight of Cups can also be telling you that it is just not necessary for you to go ahead and jump to any kind of a conclusion about your health.

This applies no matter if you are doing so in either a positive or negative way. Instead, you need to just go ahead and see your doctor or specialist in order to get their informed opinion of what is really going on.

The final thing that the Knight of Cups can indicate regarding your health is that it could point to there being some issues with an addiction of some kind whether it be drugs or alcohol.

Clearly, this is going to be affecting the health of the individual, so it is also intended as a warning that things need to change a bit in order to stop it from becoming an even bigger problem than it currently is.

Overall, the Knight of Cups is a good card to draw when it comes to your health sector as it is certainly not the bearer of bad news in any way.

However, do take heed of the warnings that can potentially come with it when it is drawn in the reverse position although they do not have to be a complete disaster or spell impending doom in any way whatsoever.

For your health, the future is going to be looking a whole lot brighter.

My Final Thoughts on Knight of Cups Tarot

The Knight of Cups symbolizes the creative adventure inside you waiting to happen.

If you will be embarking on this creative or artistic journey soon, you must direct your energies into the real world. You must not let this energy rot in your head. You must let it out into the world.

Now is the time to explore your passions and unleash your imagination.

Start small, and work quietly. Accomplish the goals you have set out for yourself. When you like the results, then you can let everyone share in your happiness.

You must let people see and appreciate the magic that you can create with your talents and ideas.

You must let people come to you and fall in love with you.

You should always believe in love, the happiness it brings, and how it can change your life in just a snap of a finger.

Love responsibly. You have to strike a balance between love and logic. You should always follow your heart, but it won’t hurt to listen to what the mind has to say every now and then.

The Knight of Cups encourages you to dream, and to dream big. But at the same time, it means dreaming big while putting in the necessary hard work.

Are you ready to put in the work and turn those amazing ideas into reality? Are you brave enough and strong enough to follow your heart?