Nine of Swords Tarot Card and its Meaning 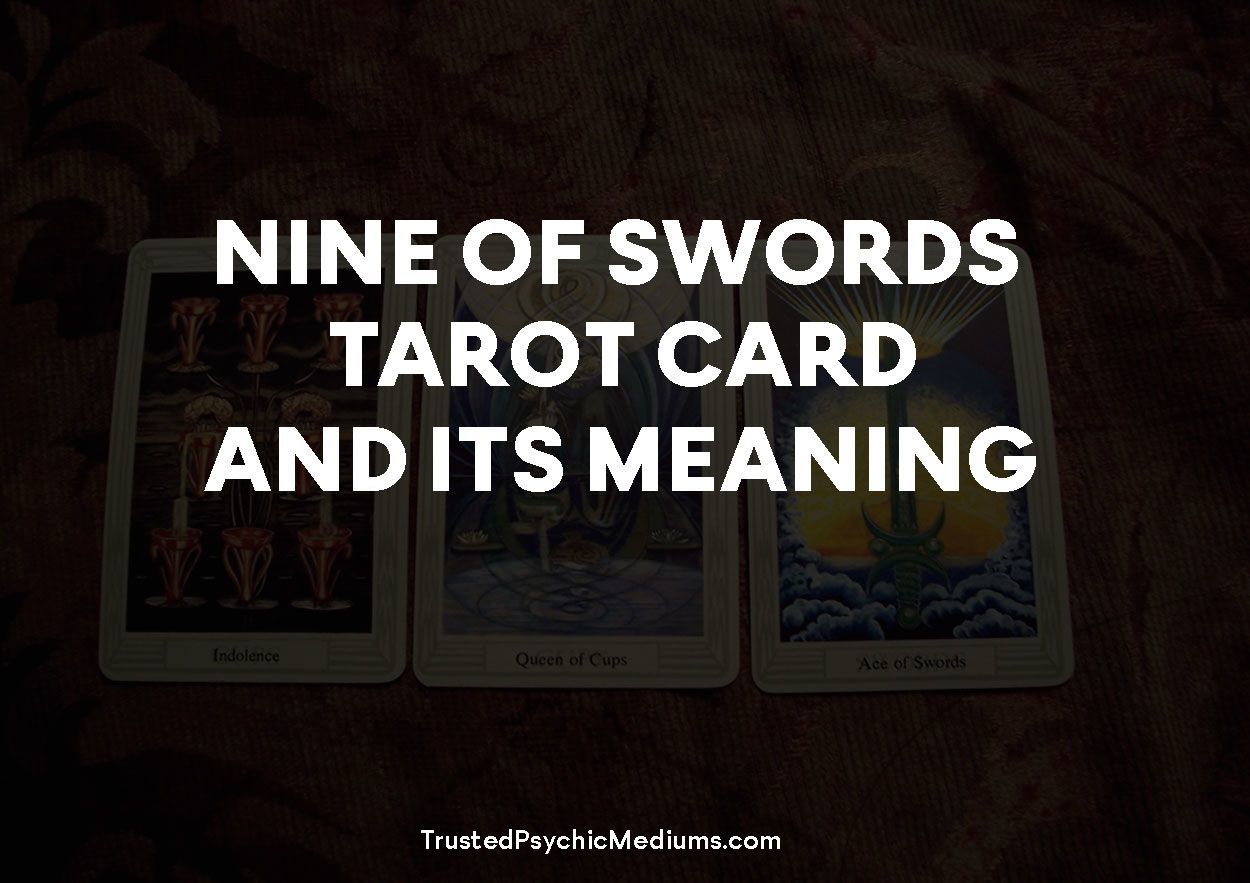 The Nine of Swords tarot is the card for mental anguish, grief, despair, and paranoia. It also symbolizes depression and intense anxiety, which is likewise with the Five of Swords.

This can also signal misunderstanding, disillusionment, avoidance, and confusion. At times, it can also represent nightmares and accidents.

The Nine of Swords tarot is depicted as a woman sitting up in bed, with her hands covering her face.

It looks like she has been roused from her sleep by an awful nightmare. She is deeply bothered and scared.

Beside her, nine swords are hung on the wall. Her quilt is covered with roses. Her bed frame is adorned with images of battle.

The Nine of Swords tarot represents your fears and anxieties, and oftentimes it denotes a negative feeling or a negative energy.

It’s mostly psychological in nature, though. Whatever is in your thoughts creates your fear and feeds your anxiety.

For that reason, how you experience the world is greatly affected by how much fear or anxiety you have in your head.

This is a dangerous thing because you unknowingly create a negative future because of your actions that are driven by your fears.

Your nightmares can become a reality because your fear allows them to happen.

The Nine of Swords tarot also represents your natural tendency to worry too much about something. You lose sleep over it.

You toss and turn and your head is filled with worst case scenarios. You work yourself up over nothing.

You need to tell yourself to relax and realize that it’s always worse in your head than in real life.

Fear is a natural emotion. It’s a part of life. But you should not let it take over your life and stop you from living your life. If you will be afraid forever, what kind of life will you have?

The Nine of Swords tarot also tells you that you are being too hard on yourself. Quit the negative self-talk. Don’t put yourself down.

Instead of focusing on why you can’t do something, concentrate on building yourself up and making yourself feel better. Back it up with positive reinforcement.

Nine of Swords Tarot and Love

When it comes to love and relationships, the Nine of Swords tarot denotes that your mind is filled with worries and anguish.

Don’t ignore your hunches. Talk to your partner, even if you hate confrontations and fights. Let him know that you know. Threaten to leave or break up, if that’s what it takes.

If you’ve only started going out, don’t believe in everything that he says right away. Try to gauge the credibility of his words and actions.

Let him earn your trust before you let yourself be completely swept off your feet. Love takes time. Trust has to be earned.

The Nine of Swords tarot can represent every bad feeling that you can think of. When this card appears in a love reading, you have to be careful. Anything that can go wrong between you and your partner can go wrong.

You will lose sleep over it. You will sink into a state of depression. You will feel unhinged and vulnerable because of it.

This tarot is the total opposite of the Nine of Cups.

So protect what you must and remove what doesn’t belong in the equation.

When it comes to your partner’s emotions, you don’t want the Nine of Swords tarot to appear in the reading. Because it denotes a relationship that is devoid of love and romance, just like the Five of Cups.

In other words, he is not in love with you!

When the Nine of Swords is in the reversed position, it does not particularly signify a happy ever after, either. Things will more or less be the same, although less depressing and discouraging.

In case of a breakup, it’s a more positive card because it signifies a new start and a recovery of sorts. You will regain your strength and willpower. These will help you to move on much easier and much quicker.

Nine of Swords and Money

When it comes to money and finance, the Nine of Swords tarot wants you to know that in order to reach a certain level of financial success, you will have to stop borrowing money to pay someone you borrowed money from.

Can you really see what’s happening here? It’s all just a cycle of earning money and letting go of money. Nobody gets rich like that.

If you’re feeling the financial strain, maybe it’s time to do something different. Know about what resources you can make use of to create additional money flows.

When it comes to money, don’t take too many risks. Just be responsible enough to stay afloat for now. If you’re smart about your money, it will be more challenging to actually lose it in the future.

Nine of Swords Tarot’s Meaning for the Future

When the Nine of Swords appears in the future position, it basically wants to tell you reexamine the standards that you have set out for yourself.

They may be unreasonable or unrealistic, and instead of motivating you to try harder, it can set you up for disappointment or self-hatred.

You need to start forgiving yourself today if you want to have a more positive and happier future.

Is the Nine of Swords a Sign of Bad Luck?

The Nine of Swords is a minor arcana card is regarded as being a card that represents fear and anxiety when you draw it in the upright position.

It is providing you with the idea that you are swamped with these negative feelings even though it is not specifically stating that anything bad has happened to you or is happening at this moment in time.

Instead, it is merely stating that your fear and anxiety is making you believe that things are going to be substantially worse than they really are, and that is going to prove to be a problem for you.

When you are feeling so overwhelmed with these powerful feelings, then it is easier to believe that you are indeed encountering some bad luck.

However, the card is not specifically stating that this is the case even though you may believe that it is doing exactly that.

This card may also indicate that all is not well in your relationships or love interest even though you may be unable to really put your finger on what is going wrong.

There may be abuse of some kind, or you are of the impression that not everything is as trustworthy as you would have liked, but it still does not mean that there is some bad luck surrounding you.

This is a recurring theme throughout the different sectors where you are suffering from that fear over what may indeed be extremely trivial things. Understanding that it is trivial will certainly allow you to move forward.

If you draw the Nine of Swords in the reverse position, then it is going to represent that there is light appearing at the end of the tunnel, and that is a very positive position to be in.

Also, you may be in the process of letting go of the feelings of negativity that have been surrounding you and this will allow you to make progress with your life.

This can mean that you are resolving a difficult relationship, or your feeling of being disillusioned with your career is also going to change with new opportunities coming your way.

Furthermore, if you have been suffering from ill health, then you are going to improve and can experience the welcome relief that does come from having that knowledge.

In general, the Nine of Swords is a card that is often associated with very negative feelings that can be strong and overpowering.

While this can disable people, and make you feel as if you are drawing in some bad luck to you, the card itself is not primarily to blame.

Yes, it is showing that you have anxiety and fear but there are opportunities to overcome it and to move on from them.

Of course, as you are suffering from these ailments, it stands to reason that you will fear drawing this card, so in a way you are falling into the trap of it before the card is able to even tell you what the future may hold for you.

My Final Thoughts on Nine of Swords Tarot

With the Nine of Swords tarot, it wants you to control your negative thoughts and emotions. Too much fear and anxiety will never give you a happy and satisfying life.

You have to take risks, and you have to conquer your fears. You have to handle problems instead of ignoring them or willing them to go away.

If something is causing you pain or unhappiness, try to find the best solution and see if you can make it work. Otherwise, let it go and move on.

Life is fleeting. You shouldn’t spend it feeling small and insignificant. You are bigger and stronger than your fears.

The Nine of Swords wants to ask you this: What are you so afraid of, and how can you stop being afraid? What can being afraid all the time add to your life?