Queen of Swords Tarot Card and its Meaning 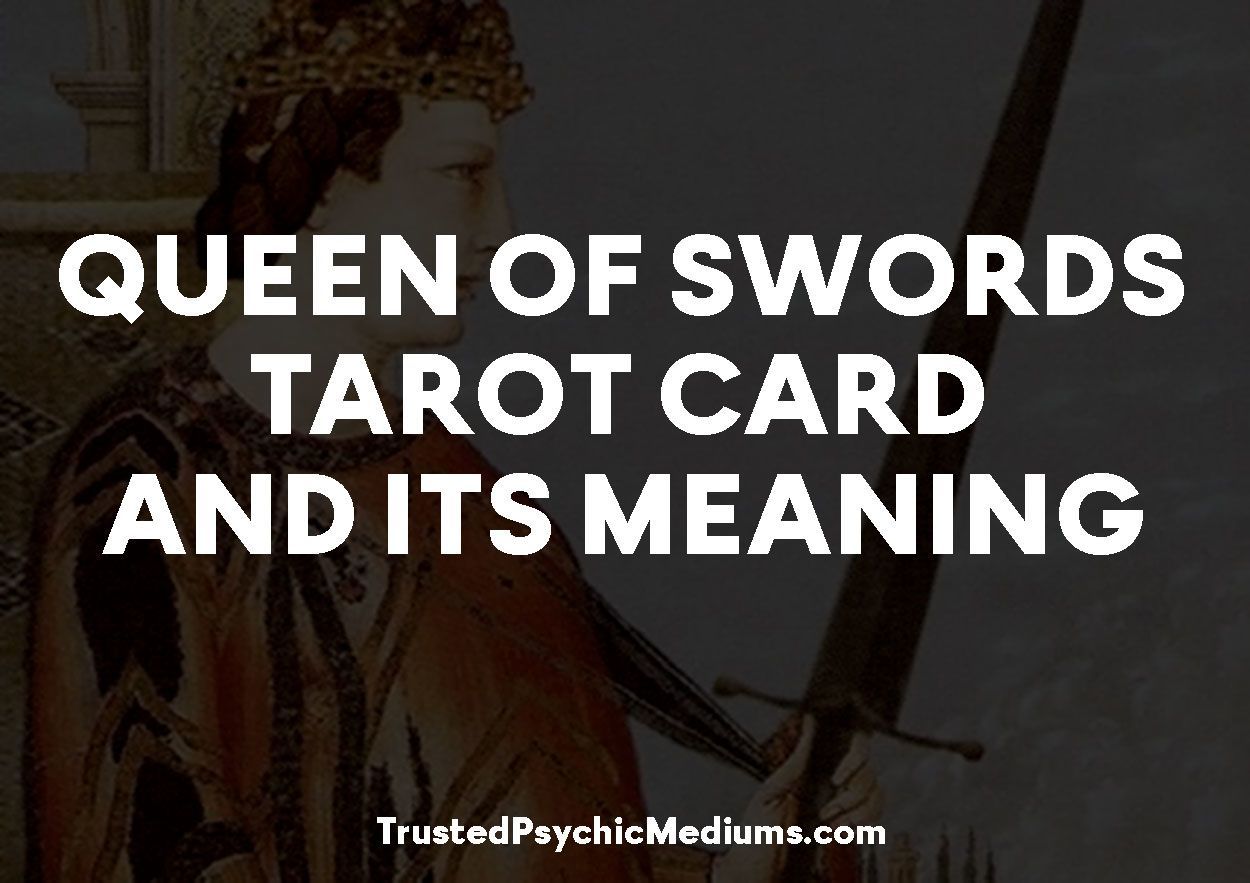 The Queen of Swords tarot is the card of quick thinking, independence, perception, and organization.

This card also denotes strength, beauty, pride, and obsession, which can be a female counterpart of the Knight of Swords. It can mean being driven, controlling, authoritative, and calculating as well.

The Queen of Swords is shown as sitting on her stone throne. You can only see her profile. She holds a sword in her right hand which she points up to the sky.

Her other hand is

outstretched, as if beckoning someone to come near. Above her, the sky is clear, which can also be said of the Queen’s mind when it comes to dealing with matters that require intellect and good judgment.

You can always depend on the Queen of Swords to tell you the truth. She lives by the truth and admires anyone who does the same.

She has no time to play mind games or to cook up tricks, but don’t even attempt to fool her or play her.

Just like the Queen of Wands, she can smell dishonesty and lies from a mile away.

The Queen of Swords tarot symbolizes being experienced with how the world works. She knows how to handle life and whatever it may throw at her.

She understands the madness and foolishness of men, but she doesn’t hold it against them.

She enjoys laughing and she always has a clever quip at the ready. She believes that life is too short to be spent miserably or seriously.

Her candor and honesty truly are refreshing!

The Queen of Swords tarot can be an indicator that you need to start being independent and free when it comes to your thoughts and your discernment.

It’s time to listen more to what your head is telling you rather than listening to your emotions all the time.

While empathy and compassion are very admirable virtues, they can cloud your judgment and take your eyes away from the prize.

With the Queen of Swords tarot, there’s no use beating around the bush. Tell it to her straight, and make it swift.

Do away with the flowery words and deliver the facts without the opinions and the unsolicited advice. There’s no doubt that she will do the same for you.

If you want to get on the Queen of Swords tarot’s good side, think quickly on your feet and be perceptive. Always be fair when dealing with people and issues. It is likewise with the Queen of Pentacles.

Don’t try to soften the blow by telling people what they want to hear. Be honest and factual and people will appreciate that one way or another.

Queen of Swords Tarot and Love

When it comes to love and relationships, the Queen of Swords tarot wants you to know that a sharp feminine energy surrounds you.

This card is all about using the head more than the heart. So in a relationship, it does not herald anything exciting or romantic.

But when the Queen of Swords tarot does come up in a reading, you can rest easy knowing that you have a solid position in your man’s life.

Simply put, you are the boss of him. You figure so greatly in his life that people can’t tell where you end and where he begins. You are almost joined at the hip!

He lets you make major life decisions for him, which just goes to show how much he values your opinion and how much he sees you in his future.

When the Queen of Swords tarot appears in a reading for a specific question about an outcome in a relationship, it does not really spell good news.

Something lurks in your happy ever after with your man and threatens to disturb the peace!

The threat can be minor, but you will have none of it. Like the true Queen that you are, you will not let things escalate.

You will handle it with much verve and class than all of Olivia Pope’s Gladiators combined.

When the Queen of Swords tarot is placed in the reversed position, the Queen becomes the girlfriend or the wife from hell. She just cannot be trusted.

She’s crass and insensitive and she always wants to get her way. The word compromise does not exist in her vocabulary.

Queen of Swords Tarot and Money

When it comes to the Queen of Swords tarot and money, it indicates that a strong female presence will play a crucial role in your financial affairs.

She is someone successful and experienced, and she has a lot to share with you about success and accomplishment, if you will be willing to learn.

Queen of Swords Tarot’s Meaning for the Future

In the future position, the Queen of Swords tarot serves as a beacon.

Is the Queen of Swords a Sign of Good Luck?

The Queen of Swords is a minor arcana card that will often represent the theory that an older woman, and one with a lot of wisdom, is going to venture into your life in a positive way.

This influence will help you through difficult times and to eventually see the light making life substantially easier than it perhaps once was.

Furthermore, the card also represents the idea of strength and also being objective with things, and by getting you to think along these lines, it stands to reason that life may very well take a turn for the better for you.

However, whether that is down to good luck or simply better decision making is something that you will need to identify for your own self.

This is all about being more open-minded and seeking a certain balance in your life with a real sense of empathy.

You will then find that you are searching for individuals with these types of positive attributes in your relationships as well as working in a space which also fits this very particular kind of bill.

The Queen of Swords in the upright position is all about fairness and treating people in the correct manner.

There is some sage advice that is intended to allow you to proceed in the correct direction and without running into any kind of difficulties or problems.

By getting you to think more positively, you can then rightfully anticipate that good luck may very well come your way.

On the other hand, if you draw the Queen of Swords in the reverse position, then things will be different to what you had perhaps hoped for.

In this instance, things are more negative and a sense of being quite pessimistic about the future and an inability to learn from your mistakes.

It may also signify that you have been surrounded by people that are far too critical of you, and this is then going to be pulling you down and making life appear to be quite unbearable.

What becomes clear is that this card drawn in the reverse position is perhaps not going to be the card that you want to draw if you are searching for positive vibes and some good luck coming your way.

In your life, it could signal you are in a relationship that is controlling and depressing. You may be struggling with your career due to gossip or people manipulating others.

Your health may be slipping down as well, so overall, this is not a good place to be in.

Ultimately, the Queen of Swords can indicate a better future for you where you are going to really make your own luck if you are able to take the advice that is being offered to you.

Just remember that this only applies when you draw it in the upright position as the reverse position is going to signal luck effectively deserting you and making life so much harder than it probably needs to be.

My Final Thoughts on Queen of Swords Tarot

What the Queen of Swords tarot wants you to know is that your instincts are working perfectly. You have a clear idea of what it is that you want and what you need. All you need to do is chase after it.

Be careful of yours and other people’s boundaries, though. Your strong energy can rub people off the wrong way.

Remember that you can rule without looking like a dictator, and that you must seek to have a balance between your intelligence and your compassion.

Always be mindful of how you carry yourself because people look up to you for inspiration. Don’t make stupid decisions or any rash judgments.

Keep your high standards and always do the right thing even if no one’s looking.

And don’t forget to loosen up from time to time! Enjoy a good laugh. Allow yourself to relax and have fun.

The Queen of Swords tarot and some things to reflect on: Would you rather hear the hard truth or the comfort of lies? Do you let your heart or your head rule your life?