Seven of Cups Tarot Card and its Meaning 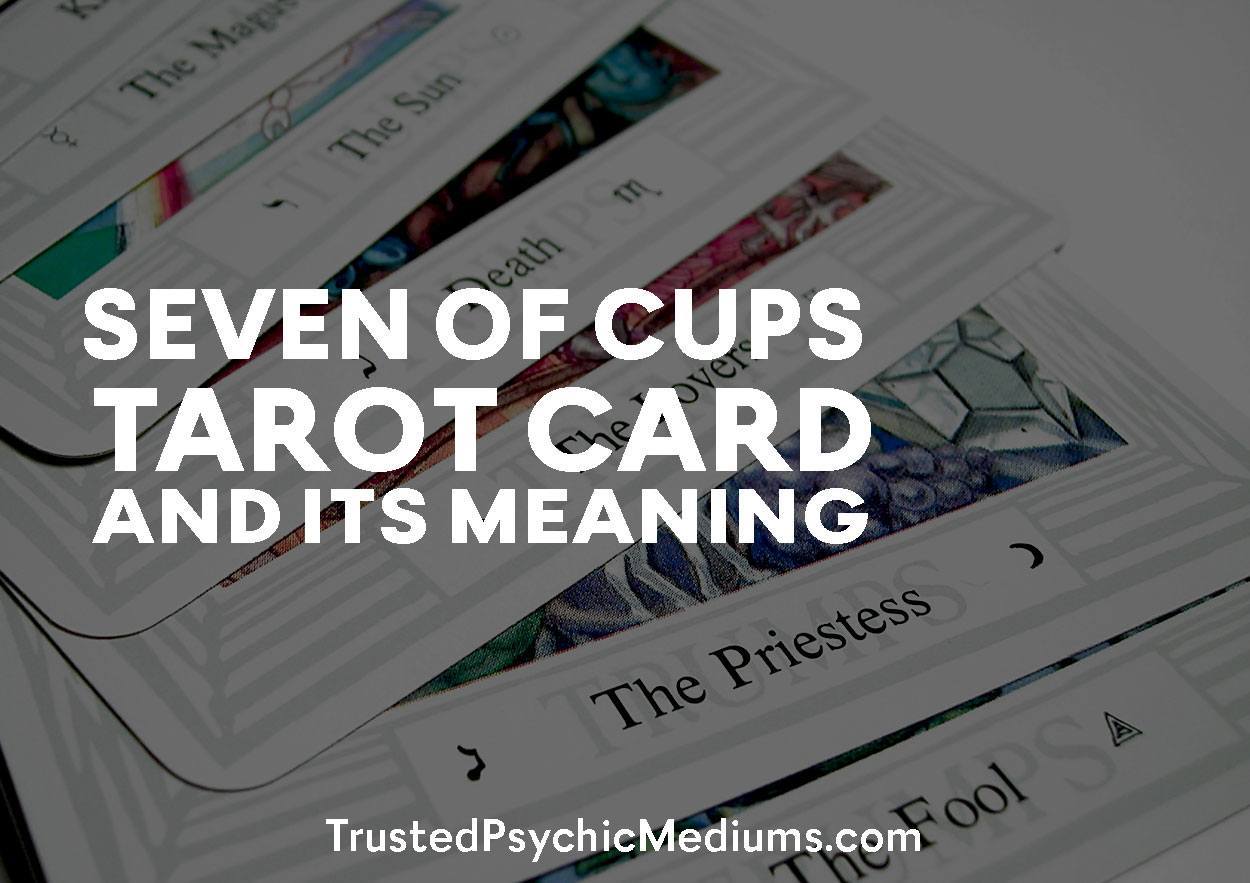 The Seven of Cups shows a figure standing before a set of cups, which hold different images on a floating cloud. He has his arm half-raised, a gesture of surprise.

The clouds symbolize the dreams and ideas that you conjure. The seven cups each hold a single object:

The objects have the appearance of gifts, but there is a danger that lurks underneath. You must be careful, because not everything is what they seem.

The Seven of Cups signifies that your thoughts and dreams must not only reside in your head. You must find a way to make your dreams and ideas into a reality.

Because you can never truly live the life that you envision for yourself if you spend your days just daydreaming and fantasizing.

The Seven of Cups wants you to stop painting your castles in the sky and begin building those castles in real life. You need to know what is real and which one is merely an illusion.

Don’t be intoxicated by your fantasies. Build your plans on what’s solid and real. When the Seven of Cups appears in your reading, it suggests that certain plans are not solidly based on reality.

The Seven of Cups also represents wishes. The seven cups represent different kinds of wishes, but not all of them will yield positive results.

You know how the old saying goes. Be careful what you wish for, because you just might get it.

The Seven of Cups also symbolizes temptations. There are so many options in front of you and it’s so easy to be influenced by the more powerful and more negative choices.

No surprise here, but they are most commonly physical and emotional in nature.

They are the choices that you will regret and will cost you a lot later in life. Before you do it, think about the consequences of your choices because things are not always what they seem.

Seven of Cups Tarot and Love

When it comes to love and relationships, the Seven of Cups wants to tell you that you are giving in to or living in a fantasy.

The relationship looks great on the surface. People think that you’re truly nuts about each other, judging by the tons of Facebook albums you keep uploading.

However, in reality, there’s a much deeper problem that you just refuse to acknowledge.

Maybe the only thing you two are good at is pleasing each other in bed. When it comes to talking about feelings or being faithful to each other, you both fail majestically.

Those vacation photos in Greece look amazing! But what your friends and family don’t know is that you spent for the entire vacation, and your guy never spent a dime.

The Seven of Cups also says that you expect too much from your man. You make him someone that he’s not and you put him on a pedestal.

The Seven of Cups is a wake-up call of sorts to rid yourself of your toxic illusions and false realities.

Seven of Cups Tarot and Money

Don’t be a scatter brain when it comes to money matters. Focus and concentrate your efforts on making this business venture a success.

The Seven of Cups usually appears when you are planning to dispose of or sell some of your assets or belongings.

It can also signify that you are expecting an increase in your money flow sometime soon, just like the card of Two of Pentacles. Welcome the gift, but manage your expectations.

Seven of Cups Tarot’s Meaning for the Future

The Seven of Cups in the future position is generally a good and positive card. It denotes that you are strong enough to fight off temptations, but wise enough to use them to your advantage to motivate you and achieve more.

The Seven of Cups indicates choices that need to be carefully made regarding future goals and ambitions. The tendency to fantasize is there, but you must always couple it with solid plans and even more solid action.

Know which goals are unrealistic, and know which ones should be prioritized. Toss out the ones that are not worth going after.

The Seven of Cups indicates that a change for the better will happen soon just like the Eight of Cups, so be ready for the positive results.

Don’t be too confident and start resting on your laurels, though. You must always work realistically to achieve your goals.

The Seven of Cups and its Meaning for Health

The Seven of Cups is a minor arcana card that is generally associated with the idea of you having a multitude of options being made available to you.

Clearly, this is something that can then be potentially beneficial for you when it comes to your health, but closer examination of what happens when you draw this card in that particular sector will be required.

When the Seven of Cups is drawn in the upright position, it does act as a guidance card while also carrying a few warnings that you should perhaps take notice of.

For example, it is trying to inform you that you may very well be trying to do too much and that you are at risk of running yourself into the ground.

If this happens, then you are more open to picking up both injuries as well as illnesses, so the advice is to take stock of what you are doing and then act accordingly.

The upright position is perhaps not as positive as you may have expected, but that is not to say that everything is going to be doom and gloom.

Instead, view it as being more of a helping hand rather than anything else and that the card is offering you words of wisdom to prevent additional problems.

If you then draw the Seven of Cups in the reverse position, then it may not be as good as you had probably hoped for.

It can often indicate that you are making the wrong decisions and that this is then having a real impact on your health and it is time to stop doing that.

You can have a tendency to overindulge in things that are not that good for you, and there is a very real need for you to stop it as soon as possible.

The card also indicates that you might want to seek some professional help as it can be tough to put a halt on things in this way.

At the same time, the reverse position can also point towards you being so involved in looking after your health that you are doing too much and need to just pull things back a bit.

You need to relax and allow your body to recover at various times as that is something that it really does need.

Making time and not trying too hard on a constant basis is what this card is trying to tell you, but in a more pleasant manner.

Overall, the Seven of Cups is a card that is more of a guidance when it comes to your health rather than anything else.

So, while it may not be completely positive with what they are trying to tell you, it is also not all as bad as it potentially could be when you look at other cards that appear in the deck.

My Final Thoughts on Seven of Cups Tarot

When the Seven of Cups appears, you need to slow down and try to avoid doing too much. You have to narrow your focus and concentrate on the things that are realistically achievable.

You will be faced with many choices, and your daydreams will add to the confusion, but you can rein it all in and make the decision that is best for you.

Continue to have high hopes for the future, but get out there and make the future that you want happen. Stop spending too much time sitting on the couch and waiting for signs.

Wake up to reality and get your move on. Be hungry enough to work hard for it and do anything for it.

The Seven of Cups wants you to know that even your life feels like it’s at a standstill, you must go to the path that will challenge you. Just follow your heart and listen to your inner voice.

The Seven of Cups wants you to look inside yourself and answer the question: Am I ready to let go of the fantasy and start creating my best possible life?