The Hanged Man Tarot Card and its Meaning 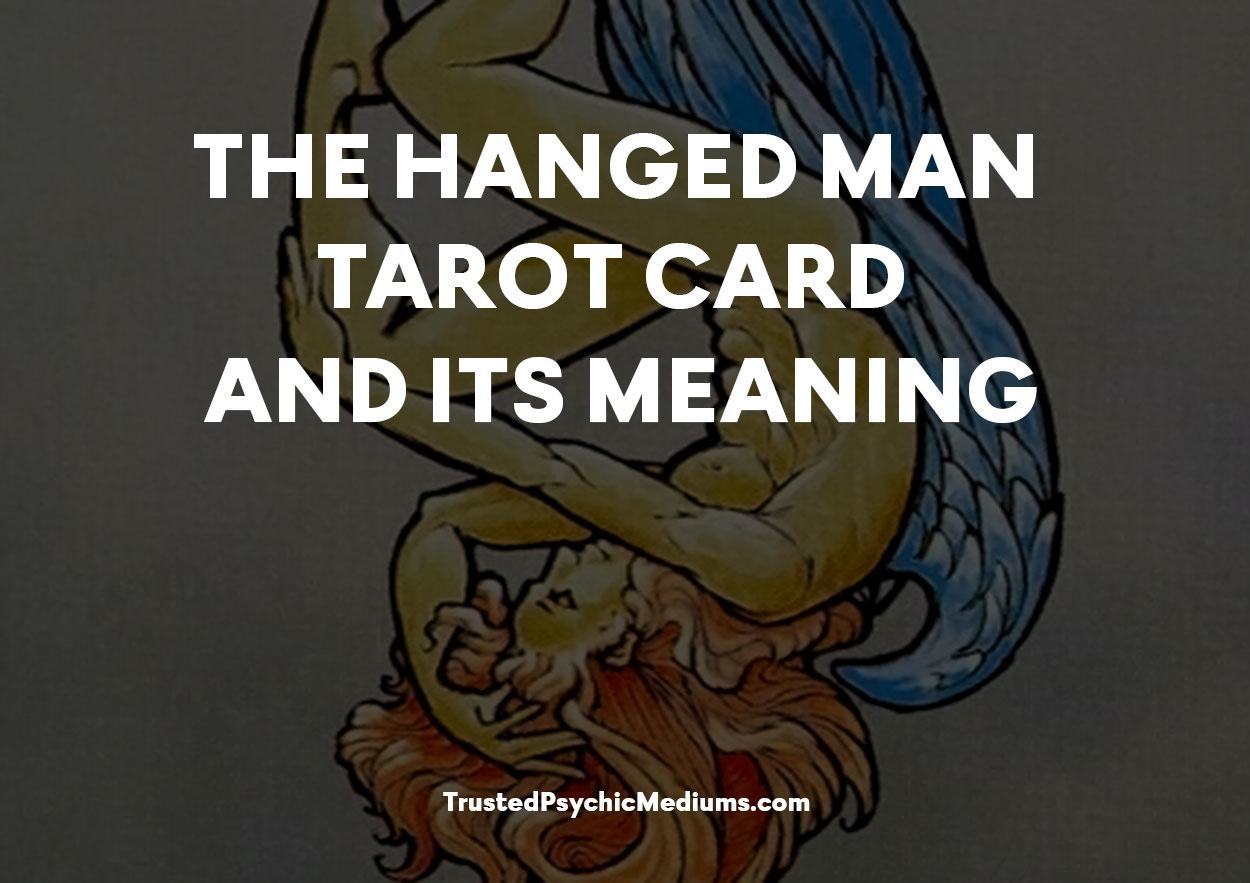 The Hanged Man tarot card is a simple but sneaky card. It’s number twelve in the tarot deck and is ruled by the planet Neptune.

The card shows a man suspended upside down from a T-shaped tree with some foliage in the corners.

There is a bright yellow halo around the man’s head, symbolizing spiritual attainment. The Hanged Man is clad in bright and colorful clothes, too.

His blue tunic is a representation of knowledge, while his red pants represent physical passion.

The yellow shoes he wears on his feet represent his sense of morality. Despite his upside down position, there is an expression of peace and calm on his face, suggesting that he hung himself in that position willingly.

His hands are behind his waist, and his left leg is bent and tucked behind the right knee. His background is a neutral color of gray, which symbolizes invisibility.

The Hanged Man is the card that suggests ultimate surrender, martyrdom, sacrifice, or being suspended in time.

It’s the typical example to ponder on when you want to break old behavior or quit bad habits.

It indicates that you are standing at a crossroads of some sort, and you’re compelled to do something about it but have no idea what or how.

That’s actually your cue to stop and calm down, and to look for ways to deal with the bad situation.

Overall, it will be a thoughtful and contemplative season in your life, just like the Hermit.

The Hanged Man Tarot and Love

The Hanged Man tarot, when it comes to love and relationships, can signify letting go.

You need to let this bad one go so that the good one can step in and find a space in your life.

In another sense, if you’re in a committed relationship and things between you and your man are starting to turn sour, you need to let go of your stubborn mental picture that having a certain kind of relationship is the only way to be happy.

The Hanged Man in love can mean sacrifices. You may be in a relationship with a guy you love, and he seems to love you back, too, but every night you toss and turn and wonder if he’s really at work, just like his short and impersonal text told you, or if he’s out with his friends at some bar and making passes at college girls.

You hate that he’s never around, or how monstrous he becomes when you get into fights, or how messy he is around the house, or how nasty a drunk he is.

You can see all the bad things but still you sacrifice and choose to stay just for the sake of having a boyfriend.

The Hanged Man can also mean a break in a relationship, or the need for some space, or the pain felt over a breakup.

It’s time to consider taking stock of the situation, thinking about your options, and planning your next move.

Remember that love can move mountains, and it can make you achieve the impossible.

If you’re single, the Hanged Man signifies choices. Plenty of options will surface, and you don’t want to waste this chance by not making a choice.

If you are in a relationship, it can mean that you want to retreat and consider the future of the relationship.

The Hanged Man Tarot and Money

When it comes to finances, the Hanged Man signifies that it’s time to share your blessings, even if you have not been blessed by a lot.

This also means that someone else out there will not hesitate to share their blessings with you. Start a kindness chain. Pay it forward, and be blessed a thousandfold.

When it comes to business, the Hanged Man urges you to trust your instincts. Don’t make half-baked decisions.

Contemplate and do the right thing, just like the card of Justice. Educate yourself and make intelligent decisions. Do this and you will reap the rewards.

The Hanged Man Tarot’s Meaning for the Future

The Hanged Man in the future position denotes an event that will happen which will compel you to act, or a decision that you will have to make.

It signifies an approaching battle, and that you should not assume the role of the enemy. Many things are obscure to you at the moment, so plan carefully, and proceed with caution.

The Hanged Man and its Meaning for Health

The Hanged Man is a major arcana card that is indicative of you being stuck in a situation that you feel you are unable to get out of.

This is clearly going to be a difficult thing for you to deal with, so there is a sense of real despair surrounding it.

The good thing is that it does also state that you have the power and ability to change things for the better, and you just need to realise that this is the case.

This is certainly something that can also apply to the Hanged Man if you draw him in your health sector, so if you were under the impression that it would be bad and negative in that area, then think again.

Instead, what it is saying to you is that you need to be willing to explore all treatment options if you are currently dealing with either an illness or an injury.

It does not mean that you should reject what is being done right now, but at least be willing to explore things from a number of different angles to ultimately get the kind of results that you are wanting.

It may also show that you have been feeling rather frustrated in trying to get over your illness or injury, and this is actually something that is holding you back at this point.

You need to be willing to let this go as best you can in order to then enjoy better health over an extended period of time.

If you go and draw the Hanged Man in the reverse position within your health sector, then that does not mean that you should be concerned about things.

Instead, it is advising you to be willing to explore outside of the box when it comes to treatment options as that is where a solution may lie.

It is also trying to tell you that there could be other things in your life that are actually making you feel significantly worse and that you need to take stock of those things in order to then move forward.

This could be stress or depression or anything else that is taking its toll as it can have a major negative impact on the body.

This card also encourages you to explore the idea of alternative therapies to coincide with your main medical care, so you might not want to ignore that as a possible option.

Ultimately, the Hanged Man is rather positive when it comes to your health, and its main concern is in trying to get you to look at it from a variety of perspectives rather than just thinking that there is only ever going to be one solution.

Instead, by examining all possibilities, you then open up the possibility of getting better in a shorter period of time.

Overall, you should be quite glad if you draw this card as it encourages you to get over your frustrations and to prepare to be far more patient if you want the correct outcome.

My Final Thoughts on the Hanged Man Tarot

The Hanged Man advises you to surrender, to change your life’s course, and let the universe work its way into your life.

This might be the quickest and easiest way to arrive at awareness and understanding.

If the Hanged Man represents someone in your life, this person can be the enemy who is trying to manipulate you.

The Hanged Man is a card that signifies feelings of sensitivity and vulnerability. It’s also a card of vision, so remove your prejudice and be open to new ideas.

The appearance of the Hanged Man in your reading suggests making a sacrifice or giving up something that is precious to you. Sometimes, you have to let go of your own desires and ambitions for the greater good.

If it’s a sacrifice that can make your life, or your relationship, or your future better, you should definitely do it.

Struggles are pointless at this time. It’s best to surrender and let it go for now and spend your energy on other worthwhile things.

Remember that you can only feel in control if you let go, and you can only win if you surrender. Now, making that sacrifice doesn’t sound so bad after all, right?