Two of Swords Tarot Card and its Meaning 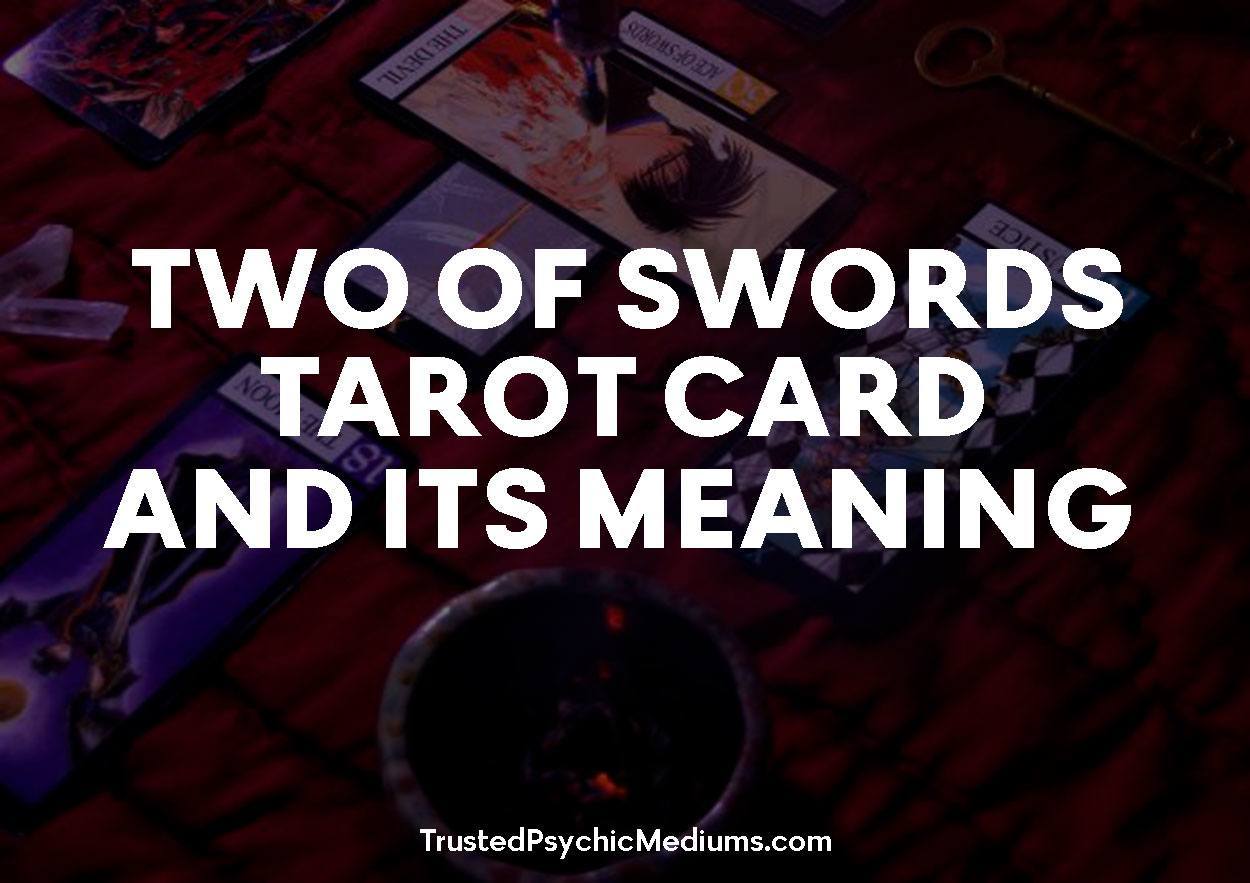 The Two of Swords tarot is the card that symbolizes indecision and choices, just like the Seven of Cups. It signifies trust and confidence. It means a truce. It also means stalemate.

The Two of Swords can also represent blocked emotions, or openness. It can mean flow, balance, and choice, which is likewise the symbol of Two of Pentacles.

The Two of Swords tarot can also signify tacit understanding and psychic reliance.

The Two of Swords tarot is depicted as young woman blindfolded while holding a pair of swords. She is seated on a stone chair with her back facing the rocky ocean.

The blindfold signifies the confusion that the woman is experiencing, as well as the inability to see problem or the solution to the problem.

The swords are perfectly balanced, which symbolize a balanced and sound mind, as well as the two sides of any situation that need to be addressed.

The crossed position symbolizes the need for a peaceful solution; something that uses logic and intelligence.

It also reflects the need for balance intellectually. You need to welcome different ways of thinking every now and then.

Even the rising moon symbolizes a new beginning that stems from the solutions.

When it comes to making a decision over something particularly difficult, the Two of Swords tarot represents choice.

You may be trying to turn a blind eye on a problem, or trying to run away from a problem, but you know that in the end you will still have to make a decision.

It also serves to remind you that life is all about decisions. Some may be harder than the rest. Some may even be more painful. But decisions still have to be made. Avoidance will never solve anything.

Just like the blindfolded woman on the card, the Two of Swords tarot can also indicate that you are missing critical information to make an informed decision. Take off the blindfold and see the best course to take.

The Two of Swords tarot also represents a stalemate and calling a truce to establish some sort of peace.

Two of Swords Tarot and Love

The Two of Swords tarot is a good and positive omen when it comes to love and romantic relationships.

What the Two of Swords tarot wants to tell you is that you are ignoring your real feelings, unlike the Two of Cups which has emotional attachments.

In a relationship setting, you and your partner are ignoring all the red flags.

You have your blinders on.

You refuse to talk about the problem of his womanizing, praying that he will get tired of it one day and just start being faithful.

He refuses to talk to you about your over-friendliness with all your exes, even if it pisses him off so much.

The Two of Swords tarot can also represent someone you love refusing to show or say his true feelings about you.

This can also signify your relationship heading towards a lighter and easier period, where you and your partner both play as equals.

If you’re single and looking for love, the Two of Swords tarot wants you to look into your existing emotional issues first before finding someone to love and someone to love you.

When you’re undecided about having love in your life, it can disappear from your life faster than you can imagine.

When the Two of Swords is in the reversed position, it means pain and hurt coming up to the surface.

In a relationship, that means you’ve had enough. You just can’t go on carrying all that hurt inside you. You will erupt like a volcano that has been dormant for a hundred years!

In the reversed position, the Two of Swords tarot can also signify that someone you love has finally realized his true feelings for you.

If you have just come from a breakup, this can also indicate that all the negativity and pain are disappearing. Now you can rekindle the love or just move on and start all over again.

Two of Swords and Money

When it comes to money and finances, the Two of Swords tarot signals the need for caution and balance.

It’s not wise to pretend that you’re okay financially, or to ignore the financial problems. This will only succeed in driving you deeper in financial trouble.

If you need extra income, work hard, and work harder! Use your creativity to turn your passion into profit. You can also try to cut back on your spending to make ends meet.

Two of Swords Tarot’s Meaning for the Future

When the Two of Swords tarot figures in your reading in the future position, consider this a blessing.

This just means that you have the power to control what your future will look like.

The power is in your hands.

You will be able to handle manipulation and deception from people while keeping your diplomacy and calm.

All the fear and anxiety will disappear, too, because you simply have the power and the control.

The Two of Swords and its Meaning for Health

The Two of Swords is a minor arcana card that represents the idea of things being in somewhat of a stalemate in your life.

You can link this to events, people, your thoughts and feelings or anything else that is connected to your life.

Also, there is an idea that you are finding it tough trying to make a decision and are too busy weighing up both sides that you are unaware of what to do next.

This is certainly the feelings that you are going to discover if you draw the Two of Swords in an upright position within your health sector.

This can indicate that your current illness can be the direct result of some kind of blockage within your body with the main focus being on your emotions being strangled and not discussed.

It is understood that the card can indicate that these blocked emotions will lead to anxiety and stress which then, in turn, can point towards a number of physical health situations and problems that you then need to contend with.

There is no doubt that, when it comes to health, then the Two of Swords does have a primary focus on your mental health rather than physical.

If you draw the card in the reverse position, then it can indicate that there is a certain struggle in trying to balance out your life in order to then benefit from it as much as possible.

You need to largely dedicate yourself to dealing with both your stress and anxiety as that is going to largely be at the absolute root of the various health issues that you are having at this moment.

Deal with the stress and anxiety, and then see the difference it makes to your general life.

There is a real idea that the Two of Swords is attempting to get you to take stock of what is going on in your life and to then take the appropriate action.

While this is not always that easy to do, you need to be willing to give it a go in order to allow those blocked emotions to then be free which will, in turn, lead to you having better health in the grand scheme of things.

Overall, the Two of Swords is perhaps not able to offer you some guiding light to wonderful health, but it does provide you with the idea of what is behind the different things that you are feeling and experiencing at this moment in time.

It is essential that you tackle your state of mind and deal with the stress and negative thoughts that are plaguing you as they lie at the heart of everything else that you are feeling.

In that respect, the card is going to do you the world of good simply by opening your eyes to you emotions and the mental side of things.

Gaining control of them will make a huge difference to it all but it will certainly be a difficult path for you to follow.

My Final Thoughts on Two of Swords Tarot

The Two of Swords tarot wants you to know that your relationships are going well enough. But they can always be better.

It’s a good time to reevaluate these relationships and see how balance and equality play a role in each one.

Are you being treated as an equal by your friends, by your business partners, and by your romantic partner?

If the answer is no, it’s time to put back the balance into things. It will not be easy going for all of you, but if you don’t speak up now, you never will.

Remember that if you want something to change, you have to be ready for change.

Some questions that the Two of Swords tarot wants to ask you: Are you using all of your available resources to come to a right decision?

Are you going with the flow, or are you swimming against it? Do you let solutions to your problems come to you, or are you just pushing your way blindly through the circumstances?