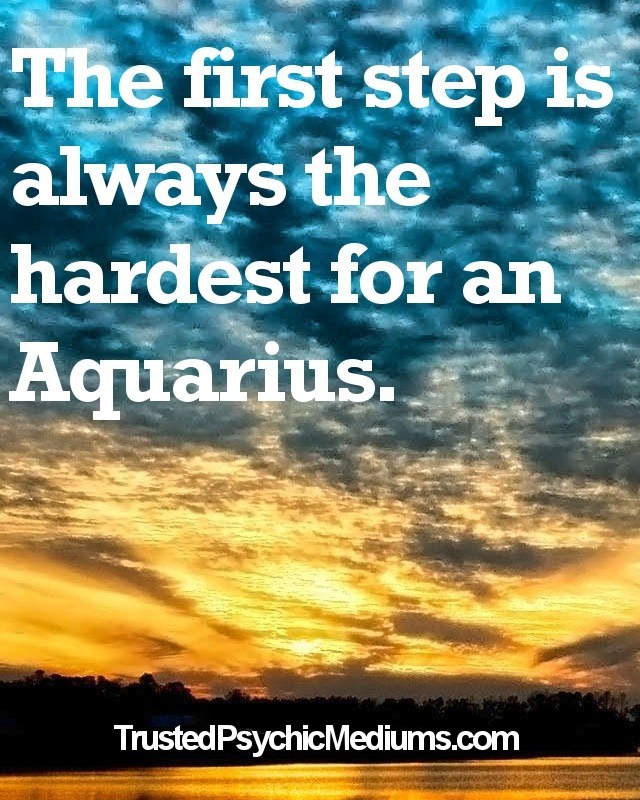 Aquarius is the eleventh sign of the zodiac family and is known as the humanitarian and crazy scientist of the horoscope family.

Individuals born under this sign are unique in their own way. They love reading and putting down their thoughts on paper.

Sometimes they can be impatient with individuals who aren’t as intellectual and unconventional as they are. They have childlike imagination and prefer being away from the real world. This is the sign of innovation. Read these 19 Aquarius quotes and sayings to find out more about these amazing people!

If you’re an Aquarian, you will relate to this Aquarius quote. These individuals are known for their unique ideas.  Aquarians refuse to follow the crowd; instead, they motivate and inspire others and raise the bar in their everyday lives.

Being the progressive souls that they are, Aquarians want to make this world a better place to live in. You may find an Aquarian starting a new social group, getting involved in a mass movement or using science and technology to serve humankind.

This Aquarius quote talks about one of their very important traits which is being self-sufficient, self-reliant. They believe in making their own rules and often don’t like being told what to do.

This sun sign really values independence over anything else. They will do anything and everything to maintain their freedom.  Individuals born under this sign want to make it big and they will do it on their own.

This quote for the Aquarius sun sign is absolutely true. Aquarians have a different thought process which is what makes them quick learners.

Individuals born under this sign have a natural flair for understanding new ideas and concepts. One of the best parts of being an Aquarian is that you’re good with numbers.  These intelligent souls are always on a learning spree!

Individuals born under this sun sign are not very good at expressing themselves. Aquarians can certainly be on the emotional side at times, but unlike other signs, they do not make it so evident to others, not even to their closest ones.

At times when their emotions are running high, they can detach themselves from the world, needing time to deal with things in their own way.

Aquarians can get annoyed if people try to be nosy and interrogate them when they don’t feel like talking about their emotions.

So sometimes, it’s best to just give them their space to process things but the best part is that they think practically and not emotionally, making it easier for them to forget and forgive others.

An amazingly true Aquarius quote. Being so passionate and determined about everything that they do makes them relentless achievers. Their characteristics make them high achievers; once they set their mind and heart into something they get it done.

They don’t shy away from hard work but this sometimes drains out their energy. Determination is a special trait of theirs and they are quite proud of it.

They are very difficult to read, making them an unsolved mystery.  Sometimes this is what makes them unique to others!

Aquarians care very deeply, however they are never able to show it, making them look aloof and overly mysterious. One needs a lot of patience and worldly knowledge to unravel this mystery.

This Aquarius quote says it all! Being an Aquarian has its perks, one of them is possessing an abundance of social charisma.

They mingle in the crowd and make friends easily.

Keeping in mind their likeable personality it is not surprising to find them having a large group of friends and acquaintances.  Even though they love socializing, they value personal space too.  Their intellectual brain and a giant childlike heart are what draw others to them.

This Aquarian quote is so accurate that it’s almost spooky, they are the most compassionate souls of the zodiac family.

They cherish the good in people and when someone close ends up hurting them, they’re willing to excuse them and give them a second chance rather than holding a grudge.

Aquarians can be extremely forgiving and will give a second chance to even those who do not genuinely deserve it. Their instinctive warmth and care for humanity make them kind, genuine, and big-hearted individuals.

Aquarians are walking contradictions. Owing to the way they process things sometimes they don’t realize if something is wrong.

They keep bottling their emotions which lead to unexpected emotional outbursts.  Not everyone can relate to an Aquarian making them difficult to understand.

This quote for Aquarians describes how they take time to trust people, but once they let you in their circle, be ready for a lifelong friendship.

Everyone knows that personal space is very important for an Aquarian. Similarly, friendships also hold an important place in their life.

They enjoy the company of others and enjoy a good chat. Aquarians are patient listeners and are always there for those who need them. They are known to go to great lengths to please their loved ones!

A monotonous life bores an Aquarian which is why they like to think differently and do not prefer being a part of the crowd. They want to be creative and innovative in their field of work.

Aquarians believe in learning by doing, even if it means creating something from scratch. Their creative ideas are how they express themselves in everyday life.

This Aquarian quote is quite powerfully true. An Aquarian, using the power of his words and connections can sort any issue and knows how to talk himself out of any circumstance.

Aquarians are talkative and at times are known for talking too much. An Aquarian is not afraid to speak his mind and will be the first person to speak up. They don’t change their opinions so easily, they speak what they believe in and can really stand their ground for causes they firmly believe in.

They are able to convince others to see their viewpoint because they have the ability to rationalize their reasons and actions. They’ve often put a lot of consideration into the things that they believe in and aren’t afraid to defend their ideas and wisdom.  They are wise beyond their years, so to say.

The next time you meet an Aquarian, be prepared to have a great time. Individuals born under the Aquarius sign are often the kings and queens of humor.

They are naturally funny and they don’t even realize it half the time. People close to them usually understand that an Aquarian’s twisted sense of humor often finds them in absolute fits of laughter. The water bearer can impress anyone with his humor, after all.

A very appropriate quote for Aquarians. These individuals act wisely when faced with a conflict or problem. They wouldn’t let a situation go out of hands.

Though not everyone is equipped to handle stress gracefully, Aquarians are different when it comes to conflict and they are known for making sensible decisions. This sign does not believe in exaggerating issues and repeating the same mistakes.

Aquarians are the most loyal creatures that you’ll ever meet; they are very big on loyalty. They value loyalty and expect the same in return.  They deeply care about their relationships and friendships and are willing to do anything to help their loved ones in need.

Once an Aquarian falls for someone, he is dedicated to her forever. Falling in love doesn’t come easily to him, however. It’s a difficult task to make an Aquarian fall for you, but once they do, you are going to be the luckiest soul on planet earth.

They are extremely strong mentally and emotionally and will always motivate you. Even though they are perceived as a sign that is emotionally detached, they feel deeply and in a profound manner.

This Aquarius quote talks about their love for details. Aquarians are the kind of people who will pick up a gadget and try to figure out how it functions. Their curious brain is always learning and looking out for new experiments!

They eternally remain students in this school called life and have an inbuilt flair for understanding new ideas and concepts. A true Aquarian is always on the lookout for new ideas and new ways of thinking.  They have their own rules and solutions to the world’s greatest problems and issues.

One of the best qualities of Aquarians is that they are very accepting.  They don’t believe in judging a book by its cover.

They have a liberal thinking, making them accepting of others the way they are without trying to change them. They are free souls and believe in living gracefully while allowing others to live joyously as well!

Remember this Aquarius quote! A hint of temperament is a common Aquarian trait.

They act detached and aloof most of the times which makes them temperamental.

Aquarians are rather emotional, making them feel things in a different way than anticipated. Since they have a high tolerance level, they do not get easily annoyed, but once they do, be ready for a volcano to explode.

Aquarians know how to enjoy and appreciate good music. Like their ideas, they want their music to be creative and new.

They love to experience new sounds and genres.

Aquarians will always be found enjoying a song you’ve never heard of. Music provides them an escape from the real world. The next time you ache for some good music, go visit an Aquarian!

Aquarius is the 11th sign of the horoscope family.

As you must have realized looking at the above Aquarius quotes, Aquarians are intelligent souls and are often inventors and discoverers. They know about a variety of things and are great at problem-solving.

Moreover, they are very patient listeners. They might sound or appear weird as they are lost in their thoughts most of the time, but they have a curious personality. Intellectual conversations excite them. Impressing one won’t be that easy!

They can communicate really well and are able to influence people with their speech.

Aquarians are very loyal and caring when it comes to friendship and relationships.

Also, they take pleasure in healthy flirting so they will be attracted to a lot of people and will be involved in harmless flirting. It’s because of this nature that they are misunderstood by people a lot!

Things that put them off are a bad dressing sense, no empathy for intellectual and thoughtful conversations, a scheming attitude, and rudeness.

Aquarians love to socialize and party but they will also like to sit back at home and unwind with their close ones.

There’s nothing you can’t discuss with them under the sun. They are not ones to take any information at the face value and will mull over the facts they have been presented with, carry out their own research, and finally come to their own conclusions.

They are free thinkers and pretty much hate to follow societal rules and stuff. They make their own rules and think creatively. It’s indeed a blessing being an Aquarian!