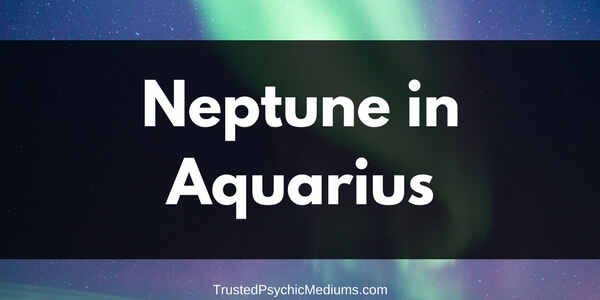 Neptune was in Aquarius from the years 1998 to 2012 – recently enough that many twentieth-century astrological texts did not think to include many details about this sign, and ones from before that did not know about Neptune’s existence. For that reason, to understand what Neptune does in Aquarius, we must think about the last times it was under this sign, as well as looking at situations that were happening in the world between 1998 and 2012.

The last time Neptune was in Aquarius was approximately 1831 through 1845, a period of progress and prosperity, with the famous Queen Victoria on the throne in England, and huge social change towards equality going on in America. Anyone who’s seen the musical Hair will know how Aquarius has been used as shorthand for social equality and justice in culture, and these are some of the highest values that many Aquarians hold!

Now, in the period between 1998 and 2012, the world came to experience unprecedented connectivity, as the internet became a staple of virtually every household and business. Social issues also slowly became more and more prominent, although the current period in which Neptune is in Pisces displays the greatest yet consciousness of social inequality.

People born in this period are committed to change, highly socially active, and innovative. Their morals are both powerful and populist, and they have an intense scorn for structures that seem outdated and obsolete.

It is important, however, if you were born during this time, to learn how to leverage your passion towards change on a level that appeals to individuals, rather than trying to create a universal perfection. Because of Neptune’s connection to the collective consciousness, you probably feel as if your ideas would work well when applied to everyone, if they would just be willing to apply them, but this is simply not how things are. Learning nuance and to appreciate differences is one of the key things that will help people with Neptune in Aquarius actually achieve their lofty goals.

The traits of Neptune in Aquarius, for all genders, include creativity and a powerfully intellectual way of seeing the world. People born under this sign are very intelligent, but may struggle to effectively express their intelligence, as they are sometimes averse to the hard work that those born just ahead of them (with Neptune in Capricorn) have trained employers to expect. For this reason, many Aquarians are drawn towards nontraditional paths, where they can be highly successful if they are committed.

The social powers of this sign are very strong, and the powerful connection that Neptune has to the collective consciousness of a time period indicates the importance of increased connectivity during this time, and for people born under this sign.

Some of the most important skills that people born with Neptune in Aquarius can develop are the abilities to build positive relationships with others, including those with whom they disagree. Their intellectualism can sometimes overpower social expectations, leading to confrontation, negativity, and the breakdown of conversations. This is not a necessary part of the experience of having Neptune in Aquarius, but it is a trap that is frequently fallen into.

Women with Neptune in Aquarius are highly creative, inspired, and social. They form strong bonds with people with whom they share values, but are relatively quick to shun those whose values they disagree with. They are strong-willed and not likely to waffle or take up a middle ground, nor will they easily relinquish their beliefs once they have formed them.

Aquarius is a highly intellectual sign, so those with it in Neptune develop powerful philosophical views about the world that are built on quite logical frameworks. The delicate art of being an Aquarius lies in your ability to adapt that framework to the imperfections of humanity, because many people simply will not ever fall into line with your framework precisely.

Women with Neptune in Aquarius will seek partners who have similar value systems to them, and with whom they match on an intellectual and spiritual level. The cerebral nature of Aquarius, combined with the psychic vibrations of Neptune, place physical compatibility on a relatively lower rung of importance, which works out well, as the prominence of the internet as a social tool can erase the physical elements from a relationship virtually entirely.

Women with Neptune in Aquarius also tend to be highly artistic, and may be more drawn than previous generations towards careers in the arts, or towards developing artistic pursuits as hobbies. Having a creative outlet is incredibly important for people with Neptune in Aquarius, as without one, they can quickly become bored and restless.

If you were born with Neptune in Aquarius, developing intellectual and creative skills and pastimes is extremely important for maintaining your psychic health. Make sure that you are spending time “producing” or “doing” (ie making things, doing activities) rather than devoting all of your time to “consuming” media. You have a great mind, so make sure it’s being stimulated to its full capacity.

Aquarius indicates a tendency to prefer “doing what you love” over “loving what you do” – that is, someone with Neptune in Aquarius is more prone to experiment (some might say job-hop) until they have found something that suits them personally.

In relationships, men with Neptune in Aquarius, like women, are very drawn to someone who they feel is an intellectual equal. They tend to treat romantic relationships by the same standards that they would judge any other relationship by, and are not much swayed by seductiveness, compared to the relative value of intellectual and spiritual compatibility.

People with Neptune in Aquarius are highly intelligent, and tend to operate under the ultimate assumption that they are right about things and other people, if they disagree, are wrong about things. This tends to be an especially marked problem for men born under this sign, as men tend to be socialized to express their opinions more openly than women (as a vast generalization).

It is important that you cultivate the skill to listen to other people’s opinions with an open ear, and resist the temptation to dismiss even the most seemingly unpleasant opinions as other people simply being wrong. This way lies political polarization and the breakdown of dialogues. Use the intellectual framework of discussion, learning, and persuading rather than black-and-white value judgements to build your relationships with others.

Neptune in Aquarius In Love

The highly cerebral nature of someone with Neptune in Aquarius means they are likely to seek out someone who they connect with intellectually. That is, they will seek someone who is on a similar level of intelligence, has intellectual interests in similar things, and who shares their values. This makes for very powerful pairings, and Neptune Aquarius couples are some of the most likely to change things about the world, if they encourage each other in these ventures.

The downside of relationships for people with Neptune in Aquarius is that they tend to have powerful moral frameworks that do not allow very much space for people to make “wrong” decisions. They tend to see moral issues in black-and-white, and a single wrong move can put you in their bad books forever.

It is important for people with Neptune in Aquarius to learn how to accept human fallibility, and develop healthier coping mechanisms when people make mistakes than simply cutting them off. Fortunately, your intellectual skills will probably make this fairly easy once you set your mind to it! Someone with Neptune in Aquarius can quickly learn the ability to positively create a dialogue. It’s all a matter of deciding that that is something that you want to pursue!

When starting a relationship, seek someone who will intellectually stimulate and challenge you. Look for a partner who shares enough of your values to form a common ground, but who has enough difference that you can keep each other engaged and help each other learn how to question yourselves in a positive way.

Once you have found a partner who intellectually challenges you in this way, it is important that you build elements of your relationship besides the intellectual aspect. There’s nothing wrong with it being your focus, but ignore other parts – especially the importance of giving each other emotional support – at your own peril!

Dates for Neptune in Aquarius

People with Neptune in Aquarius should be highly conscientious in the next few years – until 2025 – that they are not conflating emotional and intellectual experiences. These years have Neptune in Pisces, a highly emotional sign, and you may find that it is difficult for you in these years to tell the difference between what you think and what you feel.

Striking the balance between these is important, and focussing in that balance is best done during the month of the year when the Sun is in Aquarius, and the days of each month when the Moon is in Aquarius. Take some time during these periods to thoroughly examine your own behaviour and perceptions, and make sure that they’re in line with what you truly value and want to support.

When either the Sun or Moon is in Aquarius, your intellectual self is at its strongest, and you will find it easiest to see things intellectually rather than emotionally.

It is hard to make clear judgements about how Neptune in Aquarius will continue to progress, as people born under this sign are only beginning to reach adulthood, and are still children or teenagers – and who among us would want to be judged based on how we acted as a child or teenager?

Therefore, it is important to note that everything I have discussed in the above three sections is open for change and development, as Aquarius interacts with other signs and planets through the coming years, and we gain increased perspective with time.

It is hard to say with perfect accuracy what the future will bring for those who were born with Neptune in Aquarius. The last time that this happened was far out of living memory, and we have only had a few years thus far to evaluate the effects of this sign.

Nevertheless, I feel confident in drawing your attention to the importance of understanding your intellectual self. Once you truly understand what your intellectual values are, you will find it easier to integrate them healthily into your life, rather than letting them operate on a simply subconscious level.

Seek out people who will challenge you, both in terms of the level of their intelligence, and in terms of their personal values. Nothing can be gained by avoiding relationships with people who disagree with you, and you may find yourself alienating people and burning bridges unnecessarily if you don’t learn how to have productive conversations with people who hold opposing viewpoints.

You probably value intellectual compatibility over all else in your relationships, but make sure that you’re not neglecting other elements – it is possible to be intellectually, emotionally, and physically compatible all at the same time! A positive combination is better overall.

In the current period, hearing other people and adapting intellectual frameworks is more important than ever. I hope that everyone with Neptune in Aquarius will be able to effectively develop these skills, and reach excellent levels of success because of them.

If you were born with Neptune in Aquarius, I encourage you to take note of how the things I’ve said fit into your life experience, and perhaps trace how they continue to influence you through your life, so that we can develop a fuller understanding of how Neptune behaves in Aquarius!