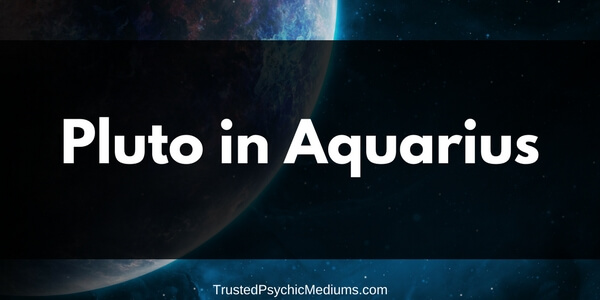 The last time that Pluto was in Aquarius was between 1778 and 1798, a period of uproar and change all over the world. Aquarius is also the next sign that Pluto is going to be moving into today, from 2024 to 2044. We might want to start preparing for it now, though, because Aquarius can be a rough sign to deal with!

Aquarius is the sign of bucking the system and seeking out change – not for nothing did the hippies of the 1960s and 1970s style themselves as “children of Aquarius.” However, because Aquarius is a highly intellectual and not terribly emotionally attuned sign, the problem it faces is that sometimes it seeks out change in ways that are not very empathetic, and don’t take other people into account as much as the people making the changes think they do.

In other words, Aquarius is committed to doing the right thing, but its version of the right thing can be a touch short-sighted. It is not a sign that does well with understanding other people’s opinions or positions, favouring instead the tendency to plough ahead with its own ideas about what is right.

However, sometimes this is exactly what the world needs. Aquarius’s passion and idealism can lift a culture out of its doldrums and get them on a path for success after a long time on a path that simply isn’t working. Aquarius is an inspiring sign, and one that is very well suited to assisting people in making changes.

Drastic change and transformation is going to come about in every field of life during the time that Pluto is in Aquarius, and continuing as the people born in this time grow up. They are inspired by the possibility for change that they see around them in formative years, and crusade for reform in every field that they feel is important… which, when the entire population of the planet is under Aquarius’s influence, means every field imaginable.

When done right, an Aquarian can bring the world out of a dark age and into the light. However, there is always the risk that shaking the foundations of society too strongly will cause more problems than it solves… and it’s up to the people born in this time to find the right balance.

Women born during this time are passionate and idealistic, tirelessly seeking out change and improvement in their lives. These women are passionate about their causes, and not afraid to fight alongside men in order to reach their goals.

One need only think of the Women’s March on Versailles, in 1789 (right in the middle of the age of Aquarius) to think about how women were affected by Pluto’s move through this sign. These were women who had never had any political rights, suddenly organizing and making a huge impact on the political landscape.

While women are no longer shut out of politics worldwide, there are still plenty of restrictions on what they can do all over the planet. We can predict that, during the time that Pluto next passes through Aquarius, we will see women boldly destroying boundaries in the same way that they did last time.

Women of this character are brave and not likely to be dissuaded from doing anything they set their mind to. At the same time, however, they can be highly thoughtful and romantic people, and are some of the most loving and devoted partners of any period in history. Women of this time connect to others on a spiritual and philosophical level, leading to them forming extremely strong bonds with the people that they love.

The period in which Pluto passed through Aquarius in the eighteenth century was the appearance of feminism as a theory. For the first time, women were discussing (in a medium used mainly by men) what the experience of being a woman was like on a philosophical level. Of course, discussions of gender are as old as time, and “feminism” as a political movement didn’t really kick off until about a hundred years later, but Aquarian women got the gears in motion in a new way.

Perhaps next time Pluto moves through Aquarius, we will see another similarly massive paradigm shift in how people think about gender – or about the human condition in general. It will be impossible to know exactly what it is until we see it in action!

Men of this time are just as intellectual and intelligent as their female counterparts. Many great writers were born in this period, and went on to write clever commentaries on society, as well as create great art of all sorts. It was a great period for creativity and inspiration to bloom.

This is no surprise, because Aquarius is always the sign of a revolutionary. It is associated with the planet Uranus, which is known as the planet of rebellion (and not only because it’s the only planet of the solar system to spin on its side). This planet is known for affecting people towards becoming less concerned about what is expected of them, and more concerned about their personal, highly intellectual values.

When Aquarius, the sign of rebellion, is combined with Pluto, the sign of transformation, it is not even slightly surprising that people born in this time (especially men, who already had more political power) wanted to make as many changes as they could, as fast as possible. They cared about morals more than pragmatics, and wanted to bring the world more in line with what they morally believed to be right.

Men born under this sign have strong principles that they adhere to without fail, and also expect everyone else to adhere to. This is a great sign for religious leaders as well as political leaders. We can expect to see an upswing in charismatic preachers as well as charismatic politicians when the people born between 2024 and 2044 reach adulthood.

Pluto in Aquarius In Love

After a few signs that have pretty cynical views towards love and romance – Scorpio, Sagittarius, and Capricorn, all in their own ways – Aquarius returns to an attitude that is positively idealistic about love. Someone born with Pluto in Aquarius will adore you profoundly, never hesitating to shower you in gifts or attention.

An Aquarius will trust you with their heart and soul, and will assume also that you have trusted them with yours, and treat you with the reverence that would require. There is no way for this sign to not take a relationship seriously, even if they don’t really care about the person romantically… they will still care about them so profoundly on an intellectual and philosophical level that it will carry them through.

This is a great thing, so long as the relationship has a measure of openness and honesty – so that if both partners actually feel that the relationship isn’t going down the path they want it to go down, they can talk about it rather than both hiding their feelings for the sake of the other person. This is especially important if both partners were born while Pluto was in Aquarius, and even more so if their charts are dominated by gentle, receptive signs like Pisces or Cancer.

If both partners are on the same page, open and honest about their feelings while still doing everything in their power to express deep caring and respect for their partner, then Aquarians can achieve some of the healthiest partnerships of anyone in the zodiac.

This is because of their phenomenal ability to make matches on an intellectual level – people born under this sign are all highly conscious of how important mental and intellectual compatibility is to them, and they behave accordingly and choose their partners based on this in large part.

This also means that many Aquarians choose to marry later in life, as they are very unlikely to open a relationship with anyone they feel that they aren’t fully matched to. However, once that relationship is open, it will not be closing any time soon. Divorces and separations are not the order of the day for an Aquarius.

Dates for Pluto in Aquarius

For both the past cycle and the coming cycle, Pluto has taken twenty years to pass through Aquarius, from 1778 to 1797, and then in the future, from 2024 to 2044. This is one of the longer spans of time that Pluto spends in a sign – and this may be related to the fact that the changes that come around during Aquarius’s time take a while to be set into motion!

Aquarians should be highly conscious of the move into Pisces, which generally indicates that their newfound ideals and revolutionary ideas have either been thrown out or become the status quo.

It is not highly recommended for an Aquarius to continue actively pursuing their plans for change after this time… they will either be beating a dead horse because they’ve become the status quo, or they will be fighting a losing battle because what they’re after is simply not going to happen in the way they’d like it to.

The dates of each year that are most important to a Plutonian Aquarius are actually the weeks when the Sun passes through Scorpio, from approximately October 23 to November 21. These are the dates in which most changes can be expected to occur, since Scorpio is the sign of transformation and change, ruled by the planet Pluto.

People born in earlier periods who are entering the age of Aquarius should mainly be cautious around this time, as this is a time when enormous changes will be happening. It can be a frightening or even dangerous period, and you may want to simply keep your head down during these weeks!

Aquarius is coming up faster than we may realize, and soon this era of change and revolution will be upon us. It is important that those of us living today, born in Capricorn, Sagittarius, Scorpio, or before, brace ourselves for the change that is coming. There can be no worse thing than being caught off guard by an Aquarian onslaught!

This will be a period of change and turmoil, but also one of great idealism, as people start to develop more positive views of the world than the ones that have been held through the last several signs that Pluto has been passing through. If you are becoming tired of all the cynicism surrounding you, then you need only hold out for Aquarius to be faced with a more positive view of the world.

The upheaval yet optimism that will colour this period of history are undoubtedly going to have an effect on the children born under this sign. They will grow up believing, not only that they can change the world, but that it is imperative that they do so. They are not people who will take no for an answer, especially if it is said by someone born under one of the signs that came before them.

So, Capricorns in particular, take note – if there is something that you want to change or put in place, you had better build positive relationships with your younger Aquarian counterparts, rather than letting yourself become the establishment that they want to tear down!