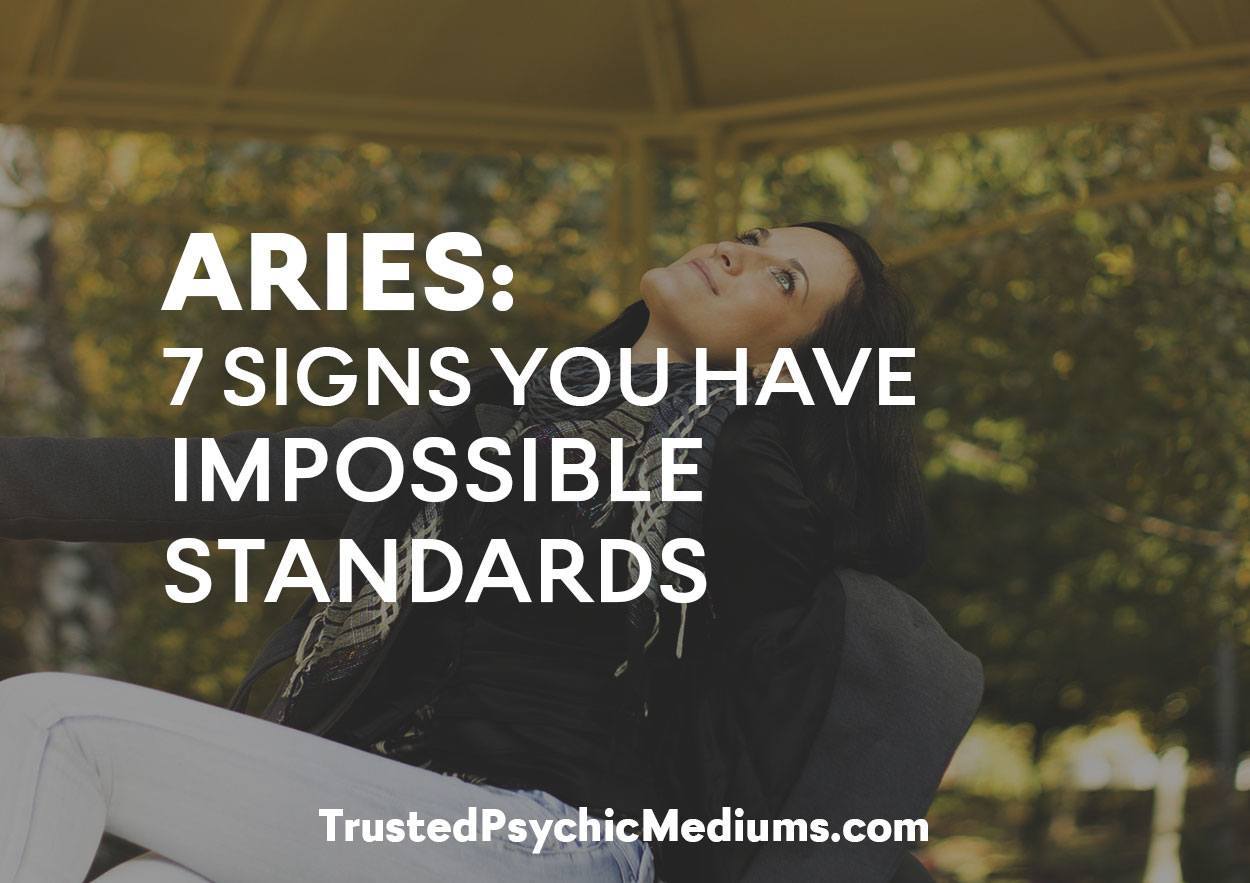 The Aries is of course based on the astrological sign for the male sheep.

As daring and brave as the Aries can be in most circumstances, we should not lose sight of the fact that we are still talking about sheep.

There is no such thing as a bad or good Aries. The only thing that matters is what you choose to do with this internal contradiction.

As you can probably already tell, this internal contrast can produce all sorts of issues as well as open all sorts of opportunities for the typical Aries.

When it comes to standards as far as interpersonal relationships and careers and money issues are concerned, this internal contradiction does have its impact.

In particular, it impacts whether Aries people would set impossible or realistic standards for themselves.

For Aries individuals, here are seven signs you have impossible standards.

Nothing Anyone Else Does is Good Enough

As I have mentioned earlier in the overview of the Aries personality, the Aries is often operating from a deep and profound sense of inadequacy and low self-esteem.

This person is very insecure. Not surprisingly, they would make up all sorts of fictions and all sorts of mental arrangements, so that they can look good.

They always want to be in the center of the spotlight. They want to grab all the credit.

Unfortunately, this works in a very negative way. For you to look good, oftentimes you have to make everybody else look bad.

This means that you have to constantly, at least mentally, depreciate everything that all people are doing. This leads to an impossible situation where nothing anyone else does is good enough.

Unfortunately, this can also cripple your interpersonal relationships. This can poison a lot of your dealings with other people.

Only Your Standards Matter

Since you go out of your way to be the center of the show, it follows that only your standards should matter.

Only your standards should be the benchmark for excellence.

In such a situation, it can actually lead to good things. By comparing yourself constantly to what you are capable of, you can push yourself further and higher.

However, if you are going to be outward oriented and apply these impossible standards to other people, this can lead to all sorts of interpersonal problems.

At the very least, having this mentality makes you very hard to get along with. People would rather avoid you.

Your Standards Change Based on Your Mood

As I mentioned earlier, it is one thing to have solid standards that are based on your experience and are truly ideal standards. It is another to set up standard so you can look good.

Unfortunately, for the typical Aries personality, they set up standards on a purely comparative basis, so they can look good in their eyes.

To make matters worse, these standards change based on the Aries person’s mood. You know you have impossible standards when you are constantly switching standards based on how you feel.

If this is how you go about handling your standards, these are not your real standards. Instead, you are just simply using crutches to make yourself feel like you look better than the people around you.

Your Standards Change Based on Who You are Talking To

Just as bad as mood-based standards are standards that vary based on context. As I mentioned earlier, typical Aries standards often change.

They are very variable because they exist solely to make the Aries person feel good. One of the most common ways Aries standards change is when they are situational.

In other words, they change based on who they are talking to.

If they are talking to a person who is very accomplished, those standards reach a very impossible level.

If they are talking to somebody who has a fairly low level of accomplishments, those standards decrease.

Regardless, one thing is sure. Those standards are always higher than the achievement level of the person that the Aries is talking to.

Your Standards Change Based on Circumstances

Again, this serves to defeat you.

This serves to poison your relationship because instead of having a fixed ideal that you can rely on time and time again, your standards are always changing.

They exist primarily to make you feel good and make you look good in your mind.

This sign that you have impossible standards can make for a very miserable life.

Your Standards Change Based on Rewards

Unfortunately, Aries people often set up standards in their mind based on what they can get.

Of course, this is a recipe for disaster because you cannot really control what happens outside us. We can only control what we dwell on and what we think about.

Unfortunately, too many Aries people have completely missed the memo on this. Not surprisingly, they focus their standards on what they can get.

Not surprisingly, they often feel frustrated, disappointed and discouraged.

You Constantly Compare to What Could Be Instead of What Is

All sorts of standards can lead to success if they are ultimately based on reality. You know you are dealing with impossible standards when they are based on things that do not even exist.

Unfortunately, this is a very common pattern with Aries people who feel that they have to compete with highly accomplished people in their lives.

Not surprisingly, they hitch their fortune to a star that is unreachable. This leads to all sorts of unnecessary suffering and frustration.