Aries: Six Simple Ways to Show Your Love Without Words 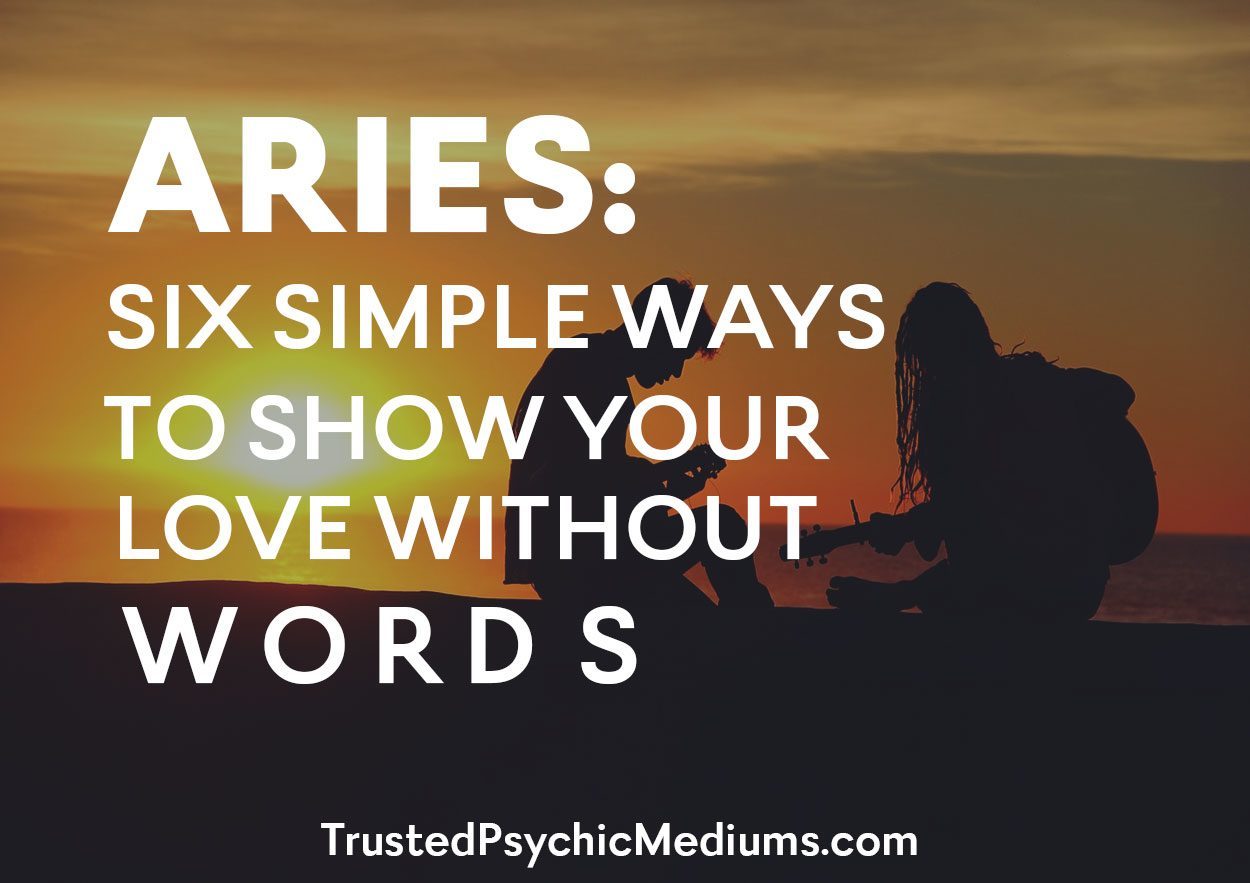 Aries people often live based on a simple maxim: Judge me based on what I do, not what I say.

To say that Aries people are people of action is an understatement.

They like to take action. In fact, they like to take so much action that you would wish that they would mellow out and think about their actions first. This virtue can easily become a vice.

You have to remember that most people do not like to take action. Most people are lazy and fearful.

They often create all sorts of barriers that get in the way of them taking action. Maybe it’s a sense of pride or misplaced loyalty.

Whatever the real reason, people tend to shy away from action.

Unfortunately, action is the currency of life. Whatever success, achievements, and victories there are, they are fueled by action.

As the old saying goes, you may have the best intentions in the world and might be motivated by the most noblest motives but none of that really matters.

The world will judge you based on your action. Everybody will be rewarded based on what they actually did.

In this department, Aries people are never lacking. They love to take action. This can be a huge benefit when it comes to Aries and their career prospects in 2016.

Unfortunately, a lot of these actions tend to blow up in their face. They often take positions that are not defensible. Why?

They come to conclusions with half the evidence. In many cases, they don’t even need evidence. They just have a hunch, and they run with it.

There are also certain elements of the Aries personality that are quite irritating.

One key manifestation of this is they don’t often like to verbalize things. As I’ve mentioned earlier, they like to live based on action.

They assume that people would understand what they mean when they do certain things. Unfortunately, life doesn’t work that way.

Different people communicate at different levels. Some people need things spelled out for them. Others need a lot of warnings before you do certain things.

It’s no surprise then that if you’re an Aries, you step on toes all the time.

I’m not talking about physical toes necessarily. This can be emotional toes or intellectual toes. Whatever it is, you’re always stepping on toes.

If you feel that your tendency towards action gets in the way of you developing deep and mutually fulfilling relationships, you need to read the tips below.

Here are six simple ways to show your love without words.

It’s very hard to argue with a hug. It really is.

When you hug somebody, whether it’s a stranger or somebody you know, it means openness.

One of the most vulnerable things you can do as a human animal is to expose your midsection.

Just as a dog would show his or her love and affection by exposing his or her tummy to you and inviting you to scratch, when you hug somebody, the same dynamic is in play.

You place your chest in front of somebody’s chest as a form of physical intimacy. It shows to the person that you are completely open to them.

You have no agenda, and you’re not there to harm them. At the very least, it shows that you have no defenses up.

This is a raw, primal, physical communication. It’s very hard to misunderstand a hug.

If you hug people easily, it shows the level of love you have for them.

Simply sticking around and giving somebody your undivided attention is actually one of the sincerest forms of love you can give.

Let’s face it, we live in the modern world. Our time is very limited there are all sorts of entertainment, commitments, and other distractions sucking up our time.

Thanks to the rise of mobile devices like smartphones and tablets, our time can easily be fragmented.

If you are having a tough time communicating your love to somebody, one of the most unmistakable ways that you can communicate your affection to that person is to simply spend a lot of time with them.

Always be present. This doesn’t necessarily mean that you’re always hugging them or stroking their ego. Just by simple being around should drive the point home that you care.

Put your partner on center stage

I know this piece of advice will not be welcome in certain circles. There’s a reason why Aries people love to grab credit.

Well, you need to let go of a lot of that. You need to move past that if you want to truly express your love for somebody else.

By simply putting your partner on center stage and giving them honest praise, you can show a tremendous amount of love. Why?

This is not how you normally operate. You don’t really normally give way as far as the spotlight is concerned.

In fact, it’s not uncommon for people to think that you think the world revolves around you. That’s how egocentric you can sometimes be.

However, your partner can get the message loud and clear that he or she is important to you when you put him or her and his or her needs on center stage.

Stop hogging all the credit

Putting somebody on center stage is very different from hogging all the credit.

You can put somebody on center stage and give that person a lot of importance, but you still grab a lot of the credit.

When you stop hogging all the credit, and you give proper respect and appreciation to your partner, you go a long way in expressing your love and affection.

Your partner will now soon enough that this is not your normal way of doing things. This is a black-and-white expression to them that you truly love them.

It takes a lot for you to give credit to other people. You’re not exactly the humblest person in the room.

In fact, humble is usually not the word ascribed to you. When you give your partner part of the credit or all of the credit, you go a long way in not just giving proper respect to your relationship but growing up as a person as well.

Do small favors for him or her

Small favors and small acts of service show love and affection. You have to remember that all people are selfish.

All people, if left to their own devices, are self-absorbed. Our egos are that powerful and that hungry.

When you do small favors that actually take away from your own time and your own agenda, this is a reminder to your partner that they are important to you.

There are many love languages.

There are different love languages out there.

One important love language is giving small gifts. These gifts don’t have to cost a lot of money.

These gifts can be as simple as costing you some time.

However, when you give these small tokens, it tells the recipient that they are important, and they matter to you.

If you want to show your love, at the very least, you need to communicate, in no uncertain terms, that your partner matters to you.

It’s very easy to misunderstand Aries people. It really is.

It seems that their whole world revolves around them. If you follow these six simple ways, you can make your love shine forth. There would be less misunderstanding and fewer disagreements.