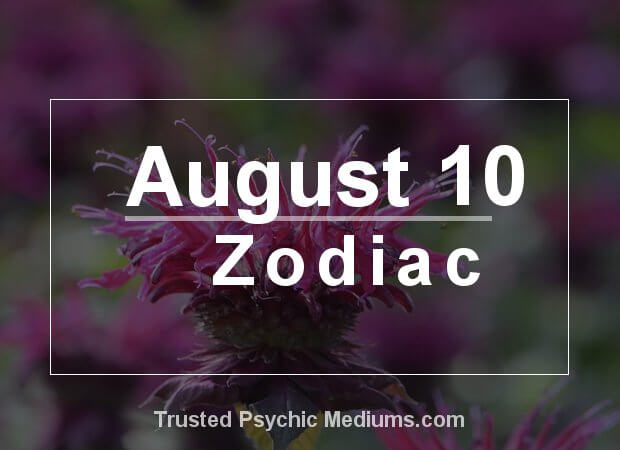 What is your Zodiac Sign if you were born on August 10?

If you were born on August 10th, your zodiac sign is Leo.

As a Leo born on this day, you are driven by the desire to be admired by many people; the more, the better.

This is an overwhelming desire on your part. It’s as if all your actions are a conversation with this innate desire.

This doesn’t necessarily mean you are an insecure person, or that you have a hole in your heart that you’re just trying to fill with the external validation provided by other people.

This is just who you are, and how your personality is configured. The sooner you’re able to understand this, and be at peace with this, the more powerful you will become.

Lovers born on this day are very attentive.

You make it a point to be as attentive as possible to your lover’s needs because by doing so, they will be attentive to your needs. You have certain requirements and expectations.

You know full well you can’t just expect things from other people without giving anything in return. You always make the first step in your relationships.

This usually works out in your favor. You are with the right person; they can respond to your good actions and intentions, and give you the kind of affection that you crave.

However, in the remote chance that you are with a person who is insensitive, learn to cut your losses early. If you are able to do this, you will be quite happy with your relationships.

People born on this day are best suited for jobs involving planning.

You know how to put things together. You know how to translate ideas and concepts into reality. Best of all, you are able to coordinate with teams of people so you can identify their strong suits.

You may also find this interesting:  August 19 Zodiac

By working with their strengths and avoiding their weaknesses, you increase the chances that your big ideas will become a reality.

The key to success here is to be more patient with people. You have to remember that we’re all works in progress. In many cases, we are late bloomers.

Don’t become impatient with people if their talent and potential is so obvious, but they seem to overlook it. Keep working with them and encourage them.

You have an inborn sense of proportion. You feel that with the proper guidance, any team will succeed. Any plan or concept will become a reality if you just stay focused.

This is what makes you attractive to people. This is the source of your charisma because you have it in you to remain optimistic.

Positive Traits of the August 10 Zodiac

While everybody else is focused on what went wrong and who caused the failure, you focus on the ingredients that you can use to achieve greater victory.

This makes you a very forgiving, compassionate, and empathetic person.

Not surprisingly, you develop relationships and alliances that are built on the solid bedrock of mutual understanding and respect.

Negative Traits of the August 10 Zodiac

Sometimes you tend to become very bossy. You feel that since you’re the most optimistic in the room, you know what’s best for the group.

As you can probably well imagine, this rubs many people the wrong way.

While it’s true that you are very optimistic and, in most cases, your vision for a common goal is the right one, you also need to step into other people’s shoes.

By networking with other people and coordinating with them, you increase the chances of your vision panning out.

You may also find this interesting:  August 7 Zodiac

The particular aspect of fire that is most relevant in your personality is its tendency to create chemical reactions.

The same reaction plays out in your dealing with people. Your personality is set up in a way where you work with people and you bring out the best in them.

Instead of chemical reactions, you produce positive emotional reactions.

The Sun is the ruler of all Leo people.

The particular aspect of the Sun that is most relevant to your personality is its ability to create energy.

When solar cells are exposed to the Sun, it actually triggers chemical reactions, which produce energy.

By the same fashion, when people are exposed to your optimistic personality, they can’t help but be inspired. Something in them is triggered, and they bring out their best.

Even if they are not grateful, understand that this is your greatest contribution to the lives of other people.

My Top Tips for Those with an August 10th Birthday

You should avoid being too bossy. Your way may be the best way, but people might not be aware of it. Lead by example, lead by kindness.

Your lucky color is subtle brown.

It’s rooted by how things actually work. By the same token, your personality is rooted in what makes people tick.

You may also find this interesting:  August 9 Zodiac

There’s a loud and proud vibrancy to people born on 10th August, and that makes these folks hugely invested in being natural entertainers.

As such, any career in the performing arts – from local troupe to international star – hugely benefits these folks as much as it does their audiences.

There’s a natural confidence that the universe has imbued those Leo people born on 10th August, and so these folks find it all too easy to become the centre of attention, whether they mean to or not.

Be it their looks, their conversational skills, their creative talents or some combination of the three, there’s a magnetism to these folks that’s impossible to deny.

It’s this same natural charisma that will pave the way to stardom, if not local recognition, for those who have this zodiac arrangement.

As such, don’t be shy in following dreams of fame and fortune if you happen to be lucky enough to have this birthday!

Final Thought for the August 10 Zodiac

You have what it takes to be a winner and be a winning leader. Don’t let it get to your head by always thinking that you have to be the boss.

Learn to give way and you will, more often than not, bring out the best in people.