Capricorn: 4 Ways To Stop Feeling So Guilty All The Time 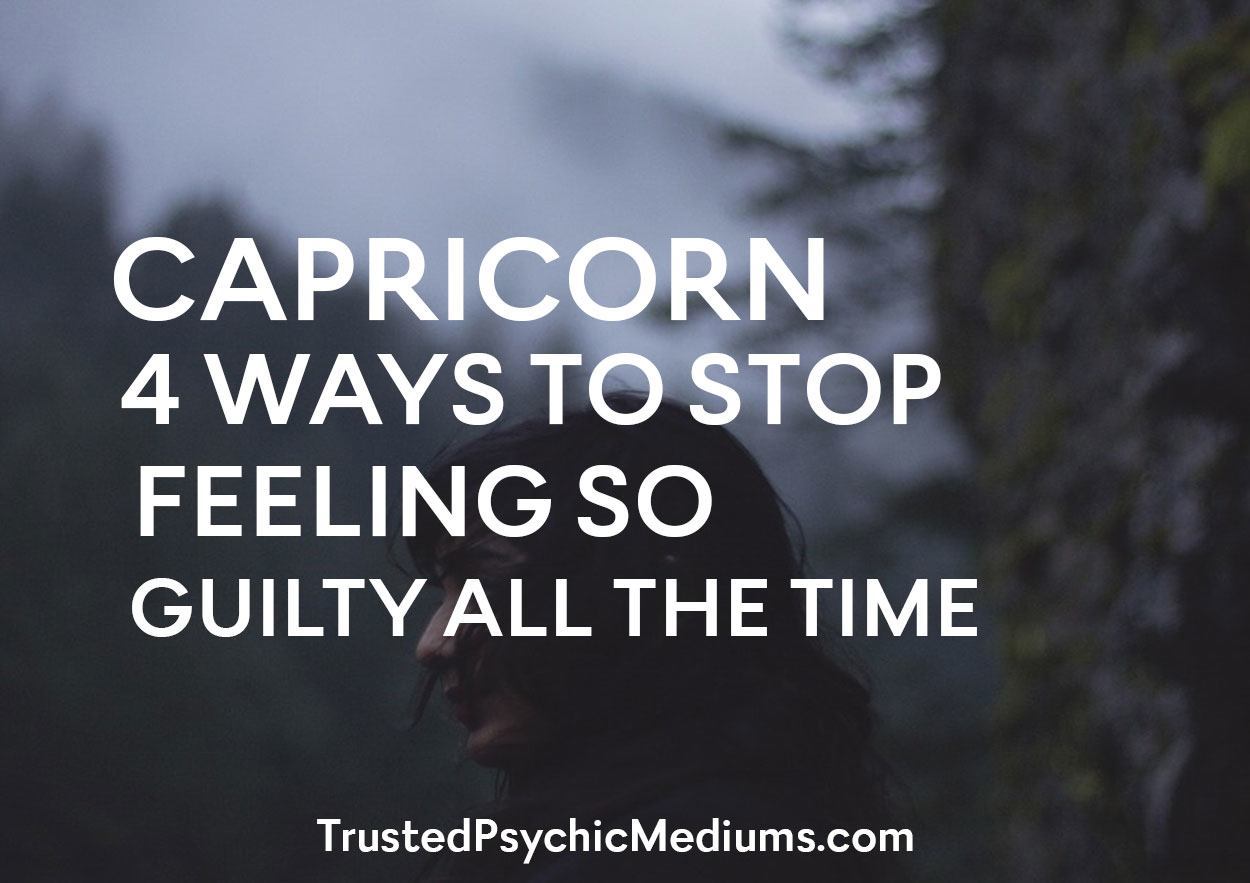 When it comes to Capricorn guilt, there are many ways to explain this peculiar feeling shared by people born under the sign of the Goat.

My personal favorite in explaining the guilt that they feel is to tell the story of two hikers walking through the woods.

These two hikers were walking through the woods and they see this big black bear. The black bear started rushing after them and one of the hikers stopped to put on his running shoes.

His friend could not believe what he is seeing. He was telling the hiker, “dude, you are not going to outrun that bear.” But his friend calmly told him that he knew that.

Instead, his friend said that he only needed to outrun him.

In other words, when bad things happen to people, they often feel better about themselves when they realize that worse things have happened to other people.

Capricorn people have a similar way of looking at life’s adversities. They would make themselves feel better by comparing themselves to people who are having a worse time.

Of course, this comparative approach to self-esteem, inner peace, and inner calm is quite corrosive.

In fact, the most efficient way to be unhappy is to constantly compare yourself with others.

Not surprisingly, Capricorn people are grappling with a profound degree of guilt most of the time. It all ties back to their comparative approach to well being and self-worth.

Of course, the answer to stop feeling guilty all of the time is to change this comparative mentality. Unfortunately, that is not going to happen. That is just how the Capricorn mindset is wired.

If you are looking for 4 practical ways to stop feeling guilty all of the time, keep the following in mind.

If you do not want to feel guilty, take comfort in the fact that you deserve what you have.

You put in a lot of work to get to where you are in your career. You have sacrificed quite a bit to gain the rewards that you are enjoying. There is no shame in the game.

If anything, people who you are feeling guilty about could have had what you have if only they worked hard, put in the right amount of sacrifice, and took the same risks that you did.

It does not really do anybody any good for you to feel guilty for achieving more than other people.

You worked for your keep, let them work for theirs.

There is really no point in you beating yourself up because you are more successful than other people. It really does not make any sense. Why?

If they wanted that same kind of success, they would have gotten it.

Seriously, if they value what you value, then they would have ended up in the same place as you.

The mere fact that they are not at the same place means that they have different values.

When they have different values, they pursue different paths that lead to different places. Leave it at that.

Just because you are happy with what you have, it does not necessarily mean that that is exactly what everybody wants.

Even if you are dealing with people who you feel guilty about because they want the same things as you and share your values, keep in mind that we all have different timelines.

You may have friends who are not as successful as you, but share the same values.

However, that does not necessarily mean that they will never reach to where you are at. They might just be taking their time.

Different people learn at different speeds. Be at peace with this fact.

Just because they have the same values, it does not necessarily mean that they are automatically entitled to the same rewards. You have to remember that success means paying your dues.

This means putting in the time. These different people are not exactly in the same place as you because they have a different pace.

– Understand that you feeling guilty will not help anyone

In many cases, it is really a twisted form of bragging. It is kind of like flogging yourself emotionally, but deep down inside, you feel really lucky.

It is a good idea to step away from all of that before you drive yourself crazy.

Instead, understand that your feeling guilty will not help anyone.

It is like you chewing gum to stop the rain. There is no connection between you feeling guilty and anybody being helped.

Do yourself a favor and get off that emotional treadmill and focus instead on the things that are going well in your life and appreciate the fruits of all your hard work.

Capricorn people have had to sacrifice a lot to get to where they end up. I am, of course, talking about ‘classic’ Capricorns.

These Capricorns are more goat than fish. This is no small distinction because, as you probably already know, Capricorns are based on the mythic goat-fish creature: half goat (torso) and half-fish (lower body).

Capricorns who are purely goat individuals are very driven, ambitious and oh-so-materialist. They focus on a goal and give it everything they’ve got. This is all well and good… to an extent.

Unfortunately, too many Capricorns overdo the whole ambition thing and they end up with severe case of psychic and spiritual tunnel vision.

They are all too eager to give up key areas of themselves just to make their dreams come true. Not surprisingly, they end up reaching their objectives only to feel empty inside.

A lot of the guilt Capricorns feel are simply early warning red flags regarding the emptiness and futility of giving everything up for one’s dreams. Keep the tips above in mind when dealing with typical Capricorn guilt.