Capricorn: The Only Thing You Need to Avoid Rejection 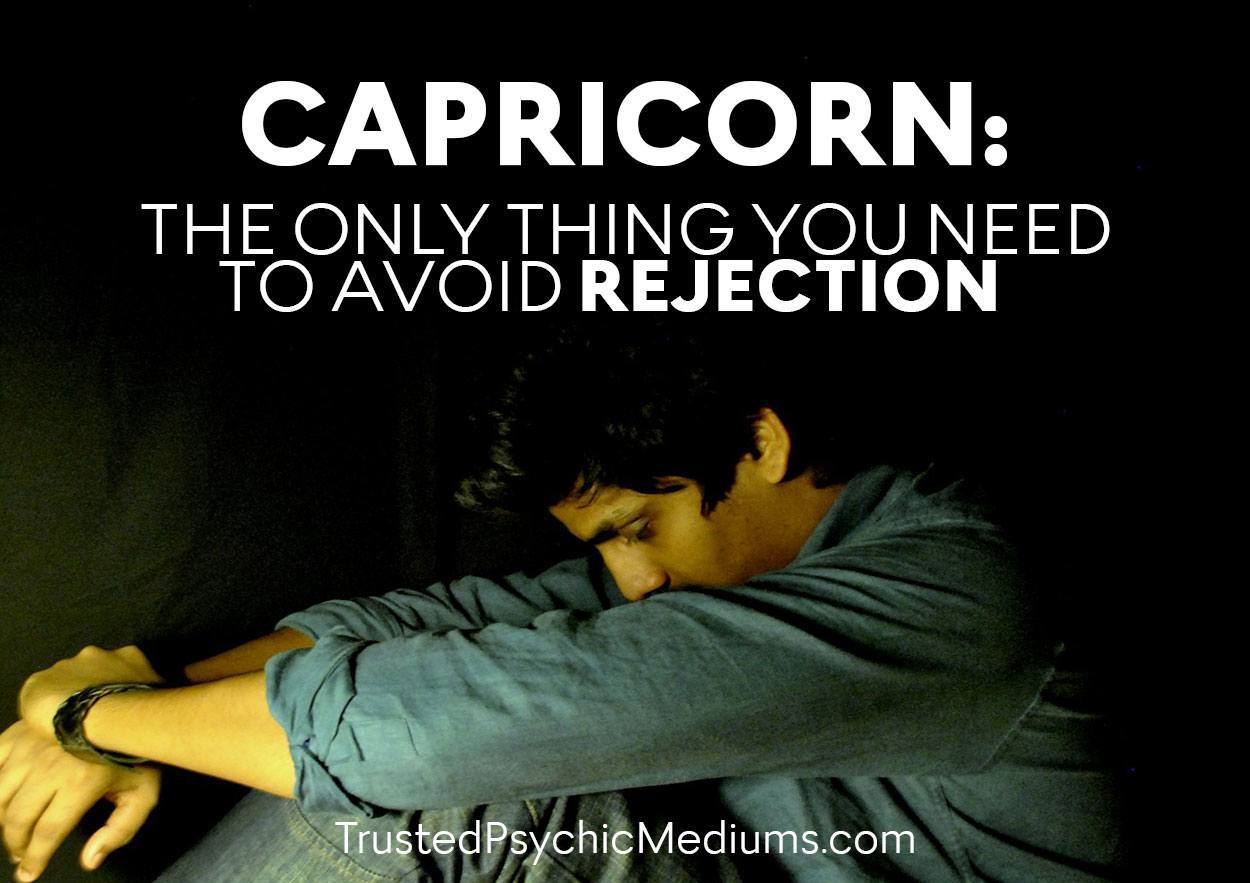 There is no horoscope sign that welcomes rejection. If you like rejection, there is probably something wrong with you.

We’re social animals. There is a part of us that wants to be around other people.

Of course, a lot of us are extroverts and others are introverts.

This means that if you’re an introvert, even if you like other people, you also want to be alone for at least some of the times so you can recharge your social batteries.

Still, there is no such thing as a person who just came out of the womb hating people.

We are social animals. We construct our identities based on how other people think.

We measure our self-worth based on the amount of validation other people give us.

Social relationships and interaction are unavoidable as far as human nature is concerned.

This is why welcoming rejection is so unnatural.

If you are going to be interacting with other people, you are looking for approval.

You are looking, at the very least, for goodwill.

You’re looking for people to engage with you.

Of all horoscope signs, however, the Capricorn has an interesting strategy as far as rejection avoidance is concerned. It’s almost like a black-and-white strategy.

On one extreme, the Capricorn can really bend over backwards to try to get other people’s approval.

On the other extreme, it would appear that the Capricorn doesn’t really care what the world thinks. He/she is going to do his/her thing.

Don’t let that extreme reaction fool you. Rejections can be quite crippling for the typical Capricorn.

You have to remember that most Capricorns have a strong earth-sign component. This is the goat part of the Capricorn sign.

In other words, people born under this sign are a mix of material concerns and material ambitions with strong emotional and interpersonal needs.

However, Capricorns that have more of a fish orientation tend to be more sensitive.

But deep down, they’re hurting. They really want to avoid rejection like the plague.

Regardless of which type of Capricorn man or woman you are, there is really only one thing you need to know so you can avoid rejection. This tip works like a charm.

If you’re a Capricorn and you don’t want to feel rejected, follow this tip.

It is very simple: don’t expect much.

You see, people are prisoners of their expectations.

If you go into a situation and you expect certain things to happen, you are setting yourself up for disappointment. Seriously.

That’s the only reading in that situation. Why?

You put up a certain standard in your mind. If things don’t pan out, you become disappointed.

You become frustrated. You feel rejected.

If you don’t expect much and you open your mind to all sorts of possibilities, it will take a really big happening for you to feel rejected.

This is the secret to the Capricorn mindset.

Among all the horoscope signs, Capricorns are the easiest to condition.

Once they get an idea in their minds, it’s very hard to get that idea out. They stick to that programming and they take it all the way.

Stop expecting so much.

You have to understand that the world doesn’t revolve around you. It really doesn’t.

If you feel that certain things have to happen because you happen to be involved, then you have entitlement mentality.

You feel that you’re entitled to certain results. You feel that certain things must happen because you are in the picture.

Do you see how wrong this is?

Because if you believe this, then you automatically don’t believe that the world turns on its own axis.

If you have a sense of entitlement, then you feel that everything revolves around you. It doesn’t.

Don’t be a prisoner of expectations. Understand that life happens when you’re making other plans.

Life is bigger, better, and more powerful than you. Understand it, get over it, and move on.

Once you’re able to do this, you would be able to manage your expectations.

Once you’re able to do this, you would be able to set the right expectations and, guess what, you will be happier.

You will expect less from people. Most importantly, you would blame other people less.

The moment you blame other people, you are handing them a lot of power. You’re giving them power over your personal happiness.

You really are. Why?

Since they are to blame for the bad things happening in your life, this means that they are the only ones who can solve those bad things.

They are the only ones who can fix the things wrong with your life. What’s wrong with this picture? I hope it’s obvious.

Get out from that negative thought pattern, and focus on being in control.

How do you do this?

Too many Capricorns have an entitlement mentality. Not surprisingly, it’s very easy for a Capricorn to get down.

It’s very easy for a Capricorn to feel defeated.

If you’re sick and tired of the world’s rejection and you want to increase your likelihood of acceptance to success, focus on your mindset.

Focus on not expecting too much from everybody else.