Capricorn: Why the Number Three Really Matters When it Comes to Dating 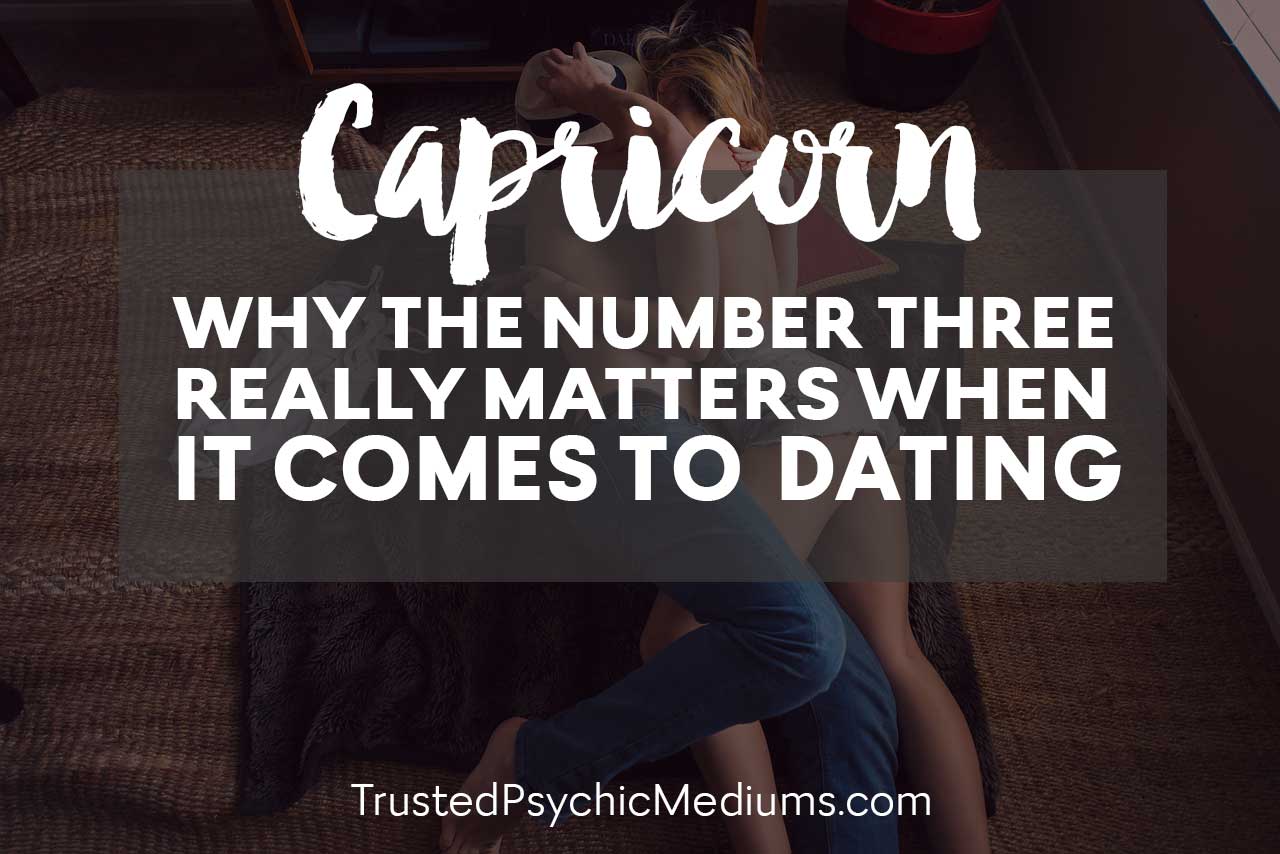 Capricorns have a strong goat element in their personalities. They really do.

However, you shouldn’t underestimate the impact of the fish tail.

If you meet Capricorns who can’t seem to live up to their fullest potential or do not act like stereotypical Capricorns, it means they have a strong fish tail component to their personality.

This can be a very good thing. This can also be a very bad thing

They can be extremely creative. They can easily think out of the box, and they don’t allow themselves to be bound to conventional wisdom and thinking.

On the other hand, the fish tail can make them emotionally unstable. If you mix Capricorn’s tendency to become narrow-minded and adopt a tunnel vision along with the emotional instability of the fish tail, it can lead to all sorts of trouble.

At the very least, it can lead to all sorts of misunderstandings and awkward moments down the road.

You only need a few of this to start down a slippery slope that can damage your chances in many aspects of your life.

I mentioned these aspects of the Capricorn personality because the number three figures prominently when it comes to their love life.

Capricorn people are like typical goats when it comes to dating.

Goats are very stubborn. Goats often get set in their ways.

If you are a Capricorn in love and you feel that your dating life is stuck in a rut, you might need to look at the rule of three in your life.

What is the Capricorn’s Rule of Three?

Capricorn people often need to have a lesson taught to them three times for them to start behaving like they understand the lesson.

It’s like a hitting the goat with a stick so that it can walk in a straight line. It’s part of their training.

Capricorns have to often repeat life lesson several times before they get the message.

That’s how hardheaded they can be.

It’s not like they don’t want to change. It’s not that they can’t see the benefits of changing.

Their inability to change is simply a reflection of their mental habits. It’s very hard for them to get out of a particular pattern once they adopt a certain habit.

Once they start thinking a certain way, it’s very hard for them to change.

This mental rigidity is part and parcel of the Capricorn’s earth sign nature. They are very big on conventionality.

They focus on what everybody else is doing and, more importantly, what everyone else wants. Surely, if everyone is thinking the same thing, then that’s the right way to think, right?

Sadly, Capricorns find it very hard to break away from the tractor beam of popular opinion, norms, and shared beliefs.

This is why the number three is crucial when it comes to adopting the right dating habits and dropping the wrong dating habits.

The rule of three for Capricorns is fairly simple: You need to learn the right things and experience them three times for them to sink in.

For example, if you need to learn certain basic etiquette with your dating effort so that your dates can be more successful, you need to fail three times.

At the very least, you need to be reminded three times.

Similarly, if you need to get rid of a dating habit that is holding you back from meeting the right people, you need to be taught the lesson three times.

When you’re telling somebody that there is a better way to do things, or they should stop doing certain things entirely, this is interpreted as a threat.

Their whole self-conception is called into question.

It is no surprise then that they would adopt a very common strategy.

What strategy is this?

In one ear, out the other. That’s right.

You tell them how to do things right and they just basically blow you off. They’re not going to dismiss you straight to your face.

However, their actions indicate that what you said didn’t really register.

This is a very common Capricorn coping mechanism as far as criticism is concerned, especially when a Capricorn is matched with an Aries sign.

Not surprisingly, they are doomed to repeat the lesson. That’s how life works. If you don’t learn the lesson the first way, you are doomed to keep failing until you get it.

The good news is that most Capricorns only require three repetitions of the lesson for them to get it whether it involves dropping a bad habit or adopting the right habits. You just really have to be patient.

If you are a Capricorn, you already know this, and you need to exercise a lot of patience with yourself.

Don’t beat yourself up too much. Don’t adopt self-defeating attitudes.

You just need to allow yourself to let the lessons sink in. Once you understand the lesson, and you can appreciate it, you can move on.

The good news is it only take three repetitions for you to adopt the right kind of changes. These changes will take your dating life to a whole other level.