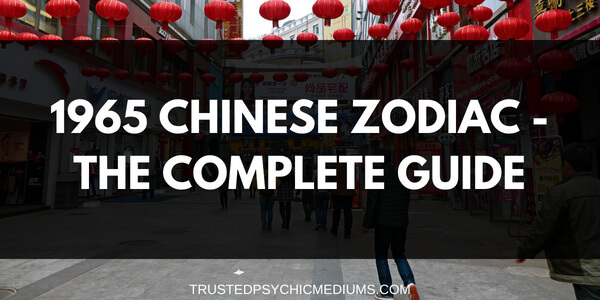 Personality Type of the 1965 Chinese Zodiac

If you were born in 1965, you fall under the Snake Chinese zodiac sign.

The Snake is considered the most mysterious animal among the twelve animals in the Chinese zodiac.

People born under this sign are known to be very intuitive, emotional, and instinctive.

They are prompted to act based on their own judgment while being very private and restrained about it.

When they have their eye on the goal, they will do everything to accomplish it. They don’t like being delayed, and they don’t like failing.

The Snake is the symbol of wisdom. Snake people are wise and intelligent, and they can communicate so much even by saying so little.

They are known to be great thinkers.

However, they are also known to love material things a little too much. They want to keep up with the latest and love to own everything nice.

Snake people love working on their own, which is why they easily get stressed. When they are, it’s best to give them the time and space to relax and recharge their body and mind.

People often regard the Snake as a sly and cunning animal that lurks in the dark, waiting for their next prey.

However, having the Snake as your zodiac sign only signifies that you are someone witty and wise.

Snake people are funny and sensitive, and most of them are talented in art and literature.

They can be a bit suspicious at times, and this makes them paranoid and hesitant.

But having a Snake person in your life means that you have someone who’s smart as they are passionate.

They are soft-spoken and very sympathetic to others. But they can also be fickle and jealous.

The good thing about Snake people is that they will not let their feelings get in the way of work.

They will still have the determination to excel at work or in business no matter what it is they’re going through in their personal lives.

Snake people have a very friendly attitude and a good understanding of human nature. They’re very good at talking to people, and this gains them many friends in their professional and personal lives.

They are smart and ambitious people, and they are always busy with something that they find interesting.

They prefer living in a quiet, peaceful, and safe environment where they can work and think without being disturbed.

Snake people love collecting beautiful things and they display them proudly in their homes.

People value their pieces of advice and their opinions especially when they concern social or domestic issues.

Snake people are very intelligent and energetic. They are always discovering ways where they can put their talents and skills to good use.

But they also enjoy taking a step back and pondering on the things that are going on around them.

Sometimes they achieve this by meditation or just by silent observation.

You may also find this interesting:  1975 Chinese Zodiac - The Year of the Rabbit

There will be many times in a Snake person’s life where they will decide that it’s time to make a change and shed their old skin.

They will learn new things and take up a new range of activities, sometimes even something completely unrelated to what they’re used to doing.

They can afford to because Snake people very seldom commit mistakes. They are also very meticulous and well-organized.

Most Snake people are also well off and financially secure, as long as they don’t gamble or indulge in reckless spending.

In the Chinese zodiac, the Snake is known for being a terrible gambler.

The Snake is very laidback and easygoing. They desire peace and stability, as well as the quieter things in life.

They don’t like the feeling of being rushed, especially when it involves making a big decision. They also don’t feel comfortable being in a very active or loud environment.

Snake people usually don’t ask for other people’s advice and will not like it when they try to get involved in their personal affairs.

They’re not afraid to perform hard work and will make sure that everything is carried out properly.

Snake people are known to be late bloomers because they take a while to find a job that they are truly passionate about.

They usually do well in jobs that require writing and research because they can work with the ideas in their heads and develop them into plans.

Snake people born in 1965 belong to the Wood element.

They are very organized at work and at home. They are also some of the most intelligent people that you will ever meet, with a refined taste and appreciation for the arts.

Wood Snakes like living in a clean and elegant environment. They feel like they can’t function properly when they live in someplace loud or messy.

They also pay attention to how they treat people, and they are very polite and discreet. It’s easy for them to make friends because they always know what to say and what to do.

However, they can be a little snobbish because they feel they’re different. They are sometimes guilty of befriending people who are important and dismissing those that they think are not.

Wood Snakes can also sometimes be passive and unmotivated. They need friends who will encourage them and push them to achieve their goals.

They may often encounter challenges at work, and they may find that it’s difficult to start. Luckily, they can find solutions to their problems with the help of their co-workers.

Wood Snakes work hard while their peers are just whiling away their time, and this makes them successful.

When Wood Snakes fail, they may entertain wild thoughts and suffer from depression. They hate the idea of failure, but they are blessed with good luck.

They just need to learn to take opportunities that will make use of their skills and talents in a productive manner.

Best Love Matches for the 1965 Zodiac

The best love matches for the Snake are the Ox and the Rooster.

You may also find this interesting:  1968 Chinese Zodiac - The Year of the Monkey

They are both creative and brave. Together, they can be very happy and stable, not to mention financially abundant.

It’s not impossible for these two to achieve fame and fortune together.

When it comes to love and marriage, Snake people often look for passion and excitement. There will often be many lovers for the Snake throughout their lives.

They know how to demonstrate how they feel, and they understand how men and women work.

However, Snake people don’t really share what they’re thinking, making it impossible for people who love them to understand their emotions and their motives.

This makes it hard for them to find true love.

They generally have a good and happy childhood, and Snake people usually grow up in loving and stable environments.

Many unwanted or undesirable things will happen in their lives, but they will not affect the Snake.

Chinese people believe that the Snake is an incredible sign in the Chinese zodiac but very tough to deal with.

They can be challenging to love, but certainly not impossible!

Snake people have a very smooth tongue and will easily cheat on someone they love when they want to.

But when they make the commitment to someone, they will do their best to remain faithful and honor this commitment.

If their partner raises too many questions and accuses them of being unfaithful, Snake people will be very reactive.

Therefore, the way to be happy with a Snake is to establish mutual trust and to resolve even the smallest and most trivial problems as soon as possible.

The Snake is also sometimes referred to as a small dragon. It often symbolizes a clever, intelligent, and clear feeling.

It’s not appropriate for Snake people to show too much energy or excitement on the first date because not everyone will find it attractive. Take note of this if you’re going out on a date with a Snake!

Wealth and Fortune for the 1965 Chinese Zodiac

Snake people love having money, and they love spending it even more.

They will accumulate a large amount of cash but spend it all on gambling activities if they’re not careful.

They will often have money in savings and are good enough at accounting for it, but they will make sure to have some gaming money handy all the time.

They are very generous with their resources. If you’re in need of some financial advice, you can always ask a Snake because they know the best way to invest.

Snake people excel in a certain job, career, or position and they can be happy with it for many years.

They do this because they like being financially comfortable. They also like the fact that they’ve already mastered what they’re doing, and they don’t have to gauge everyone around them anymore.

Snake people also live a reasonable lifestyle. Money is not always an issue, and they can take care of themselves and the people they love with no difficulty.

You may also find this interesting:  1972 Chinese Zodiac - The Year of the Rat

The lucky numbers for Snake people include 2, 8, and 9 and other combinations that contain these numbers, such as 28, 29, 289 etc.

Black, light yellow, and red are considered the luckiest colors.

The lucky flower for this Chinese zodiac sign is the orchid.

The lucky directions are southwest, northeast, and south.

3 Unusual Facts About the 1965 Chinese Zodiac

It is believed that the Snake only became the sixth animal in the Chinese zodiac because it hid under the Horse’s hooves. This only shows how they meticulously plan and do what’s necessary to achieve their goals.

The coiled Snake is an ancient Chinese symbol known to be the precursor of the Dragon. It’s believed that the Snake is connected to the beginning of the Universe.

Snake people are well organized, intuitive, discerning, and discreet. They are kind and considerate people who prefer to stay quiet with company.

However, don’t be fooled by this quiet demeanor because they can be quite suspicious or stubborn underneath.

They don’t like failing or getting hurt. This is why they work hard to see beyond people’s appearances.

When Snake people make use of their talents, they can create their own realities beautifully and practically.

They will be charming and lovely to you when you interact with them in the same way. Just never do something that will personally attack them because they will not forget it very easily.

Snake people don’t have a lot of friends, but the ones they consider their friends have proven their love and loyalty.

Once people become their friends, they will share everything with them.

But they guard their friends like their valuable possessions, and they can easily become jealous or obsessive.

Snake people learn in life by learning from their own mistakes instead of just basing them from other people’s experiences.

They appreciate all the fine things in life and sometimes crave for them too much.

They are patient and intelligent. Because they are smart with their money, they can succeed at most things they invest their money in.

It takes them a long time to build intimate relationships because trust does not come easily.

They can be very possessive, envious, and jealous. But they will lead happy and healthy lives and be in committed relationships as long as they satisfy their need for some alone time.