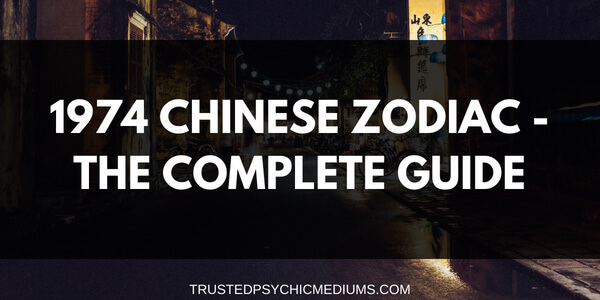 Personality Type of the 1974 Chinese Zodiac

If you were born in 1974, your Chinese zodiac sign is the Tiger.

The Tiger is a symbol of power and strength, and it inspires respect and fear.

Tiger people attract people everywhere they go. They have admirers left and right.

They are brave, confident, and energetic. These are just some of the traits that make them excellent protectors and leaders.

Tiger people are quite liberal in their way of thinking. They are also rash and passionate, and they will resist the authority of other people.

Even if they can be selfish when it comes to the little things, they can be generous on a larger scale.

Tiger people are people of action, often placed in the limelight by fate.

They don’t like being confined to play traditional roles, and they often choose to have a more unburdened life.

Tiger people have brilliant minds and many talents and skills. They can adopt any career and enjoy tremendous success.

Their colorful experiences enrich their lives and add more depth to their soul.

They don’t care so much about material things because they are after moments, lessons, and experiences.

Tiger people have a natural magnetic personality that draws people to them like moths to a flame.

They are warm and friendly, and they often have an honest and direct approach to life.

It’s their generosity, kindness, and compassion that will always shine through. But when they are backed into a corner, they will have no choice but to unleash their fiery side.

A solitary life is often the price that Tiger people pay for their position of power or authority, but they get used to it in the long run.

Tiger people are tolerant and democratic in their points of view. They know the importance of having the cooperation of other people in their path to success.

They are friendly and charming, but they will always be loyal to themselves before anyone else.

If you’re born in 1974 and your Chinese zodiac animal is the Tiger, your element is wood.

They command respect and awe from everyone. They are also revered because they are fierce and fearless fighters.

Wood Tiger people are wonderful to have around because of all the excitement that comes with their lively personality.

Their energy and enthusiasm are contagious. Their passion for life is also very refreshing.

Wood Tiger people are captivating, and they love being in the spotlight.

They may be easily bored and reckless by nature, but that’s just because they are made for action.

Because they have a distrustful nature, Tiger people can falter and make rash decisions.

They find it hard to trust other people or to rein in their emotions. They feel the need to speak their minds whenever they’re upset.

But just as they are short-tempered, Tiger people are also generous, affectionate, and sincere.

They have a great sense of humor as well.

Wood Tiger people love to hear words of wisdom, and they will cherish people’s advice. This, however, does not mean that they will heed it.

They may be too intense to call on during times of stress, but they are known for their ability to influence the crowd.

At their best, Wood Tiger people are sympathetic, sensitive, and warm.

At their worst, they are selfish, foolish, and stubborn.

Wood Tiger people have a continuous need to be challenged, which can explain why they shift careers often and jump from company to company.

It does not really pose a problem because they are smart and able to master new things quickly.

The best jobs for Wood Tiger people are those that will groom them for leadership positions.

They are also a good fit to be an advertising agent, travel agent, comedian, writer, actor, artist, musician, flight attendant, or pilot.

Wood Tiger people are creative and passionate. They will never bore the person they’re in a relationship with because they are always full of exciting ideas.

They’re people who are polite, expressive, and trustworthy, but beware.

They also tend to dominate their relationships.

It’s instinctive on their part. But this behavior can be kept under control. They just need someone who will be equally active to cope with their sense of adventure.

Best Love Matches for the 1974 Zodiac

When it comes to love and relationships, the Tiger makes the best love match with the Horse and the Dog.

When a Tiger forms a close bond with a Horse in both pleasure and business, it proves solid and is bound to last.

Tigers and Horses will stand by each other in marriage, in friendship, and in whatever cause they are fighting for.

Individually, the Tiger and Horse can light up a room. Together, they illuminate the whole universe.

Both are diehard optimists that believe in the power of faith and love.

If the future looks bleak, these two will work to find the silver lining, and they are usually very successful.

The Tiger loves the Horse’s great sense of humor, and the Horse loves making the Tiger laugh with their jokes even in the most inappropriate moments.

The Horse is also fascinated by the Tiger’s erratic behavior.

They like being surprised by invitations for cheeseburgers at three in the morning or the next flight out to Las Vegas.

Both value their freedom and can afford not to see each other for a few days without damaging their relationship.

In fact, taking some time out can even strengthen this union.

The Horse is more conventional than the Tiger, which can cause the occasional argument.

The Tiger also thinks the Horse is too scientific, whereas the Horse believes the Tiger is unreasonable.

But for the most part, these two think their differences are more endearing than annoying.

Making Love? This is a wild combination that never loses steam. The Tiger and Horse love thinking of creative positions and arousing techniques that will keep the attraction strong and the passion alive.

Neither the Tiger nor the Horse shows signs of getting tired when it comes to making love. They can enjoy a healthy love life for many, many years!

The Tiger likes being praised and held, which seems cheesy to the Horse. But if the latter complies, the former will increase their efforts to be the best lover in the world.

The Tiger and the Dog also make a sweet, loving, and adorable pair.

The Tiger loves to ease the Dog’s worries and anxieties with soothing words of love.

Meanwhile, Dogs are ready to come rescue the Tiger from their unhealthy impulses.

These two will watch each other’s backs and know they are safe from harm together.

The Tiger will find the Dog’s possessiveness dull. But that’s okay because the Dog thinks the Tiger is an egomaniac.

They are smart and mature enough to know that no relationship is perfect, and they are willing to overlook their own weaknesses for the sake of peace and harmony.

As friends, the Tiger and Dog are unparalleled. The Dog lets the Tiger lead them down unfamiliar paths, trusting that they will always keep them safe.

The Tiger admires the Dog’s altruistic instincts. As a result, the Tiger is often inspired to get involved with charitable causes.

The Dog will have to get used to waiting for the perpetually late Tiger.

But the Dog will always forgive the Tiger no matter what, provided the Tiger keeps protecting both their interests.

In lovemaking, the Tiger and Dog get along very well. The awkward Dog melts into the Tiger’s warm embrace.

It can be challenging for the fun and flirtatious Tiger to stay true to the strong-willed Dog, but the emotional strength of this bond cannot be easily destroyed.

The last thing the Tiger wants to do is break the Dog’s heart, and they will stay faithful as a result.

They are at their best when they are in love. They are truly great romantics!

When they get bored, which happens regularly, they like to move on to a new challenge.

They seek love and affection and love to give it in return. Tiger people’s imagination, energy, and passion for love is unlimited and only a few can match it.

From an emotional perspective, the Tiger is like a small child. When they see something they want, they get it and play with it until they destroy it or get bored with it.

But when they find the right person to spend the rest of their life with, they will treat this love with special care.

Wealth and Fortune for the 1974 Chinese Zodiac

Tiger people are risk takers and high fliers. If they do any job that puts them in a cage, they will fail miserably.

They belong to jobs that satisfy their desires for adventure, and they need to work jobs that will stimulate their body and mind.

When they are happy and satisfied with the work they do, the money will simply keep flowing in.

Tiger people often meet financial obstacles, but they will always be able to spring back.

They always have an endless source of money generating ideas, and this is their strong point.

Tiger people have so many big ideas that their brain occasionally overheats, and they fail to tell the good from the bad.

They will blossom in any job that requires variation and innovation, especially if they are outdoors and not sitting in front of a desk.

When Tiger people are confined in the office, they can wither like a rose in a sitting room.

When courage and quick judgements are necessary, Tiger people step up and become natural leaders.

They are champions of the underdogs as well. Although they may appear laidback, they are extremely hard workers.

They won’t let people down, and they can expect big rewards for their hard work.

The Tiger zodiac animal is associated with the Earthly Branch Yin.

In terms of yin and yang, the Tiger is yang.

The Southeast, east, and south are the auspicious directions for this sign.

The lucky colors are orange, white, grey, and blue.

The lucky numbers are 1, 3, and 4, as well as combinations that contain these numbers.

Cineraria is the lucky flower for the Tiger.

3 Unusual Facts About the 1974 Chinese Zodiac

The Tiger is considered one of the most prosperous Chinese symbols in the world.

Because of the Tiger’s raw power, it’s revered as the ultimate protector of home and hearth in China.

The energy of the Tiger is known to guard against fire, thieves, and ghosts, which can bring devastation to any home.

They are democratic in their views, and they understand the need for other people’s support if they want to advance in life quickly.

Tiger people will attract a lot of friends and supporters, and they can mingle with people from all walks of life.

The Wood element gives Tiger people a more even and pleasant disposition, and their charming, creative personality is perfect for group efforts.

Tiger people are sought after in polite society because they have the gift of bringing incongruous people together.

But mostly their loyalty is to themselves.

No one is indispensable to them. Should anyone choose to leave, they will just wish them good luck and waste no time in finding their replacement.

Tiger people are skilled at delegating chores and adept at manipulating people into performing for them.

They will take on a minimum amount of responsibility.

Tiger people should not take on more than they can handle. But it will be hard for them to admit their limitations.

They also do not take readily to criticism, no matter how kindly or constructively they are given.